Today I want to take you on a drive around the beautiful countryside which surrounds Vicenza.

For a number of days now the weather has been glorious. The sun is shinning and in the late morning hours it feels really warm on your face. The sky is blue and there is a general feeling in the air best summed up with the words: ‘Oh, gosh! I am so pleased that winter is over!’.

Just the right moment then to leave the city behind and, piled in our little red car, to explore the nearby hills and villages.

Right next door to Vicenza are the Colli Berici – one of the few hilly formations in the otherwise flat as a pancake plain of Veneto – the Northern Italian region where we currently live.

Steep and narrow roads with dizzying curves and turns criss-cross the hills leading you from village to village and opening glorious panoramic views right in front of your amazed eyes. 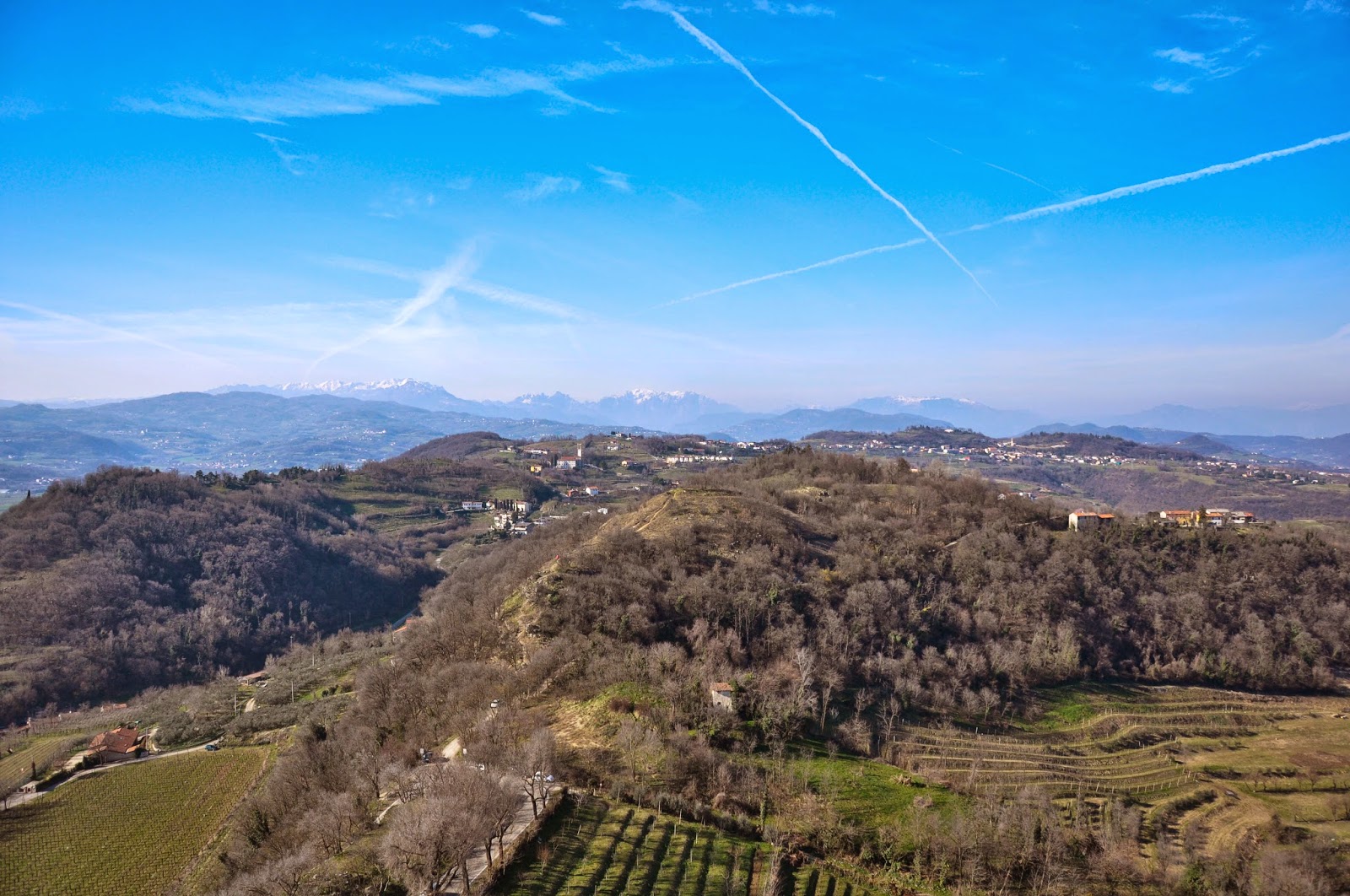 We took one such road and after a short drive from Vicenza reached the village of Arcugnano perched a top of a steep hill. It was sunny, warm and very quiet. So, we parked the car and explored.

Our first stop was the village church which commanded some great views of the plain below.

From there we followed a little winding road ascending even higher up the hills. We came across a little astronomical observatory, followed by some amazing houses.

Building such a large house on top of a hill must have been an arduous task. I wondered who has had the energy and the drive to do it. At the same time we were surrounded by such peace and quiet, that I sort of understood the impetus to live there unburdened by the city noise whilst feasting your eyes and your soul on the inspiring views.

Back in the car, we drove down on the other side of the hill. The lake Fimon soon came into view. Under the sunny skies it looked particularly blue from afar.

Up close the see-through water revealed the deep vegetation which grows on the bottom of the lake stretching its tangled stems and leaves all the way to the surface.

Plus, there are resident ducks and swans.

After that we piled again in our little red car and continued with our exploration of the surrounding hills.

Ten minutes into the journey a huge building caught our eye.

This is the cathedral of the Comune di Brendola. Locally it is known as the ‘Incompiuta‘ – The Unfinished. The works stopped one step from completion during the Second World War, never to resume.

The close to 30 meters high building remains abandoned and its imposing structure on top of a hill is an arresting sight.

From there we headed to Montecchio Maggiore – a small town in the province of Vicenza. It is flanked by a hill crowned by two castles.

Rather romantically, one is known as Romeo’s Castle and the other – as Juliet’s Castle. Both were built around 975. In the 16th century Luigi da Porto – a noble citizen of Vicenza, whom I mentioned here – used the castles as an inspiration for his novella Romeus e Guilietta. Guess who was influenced by it to write one of the most famous romantic tragedies of all times.

We parked the car and walked up to Romeo’s Castle. 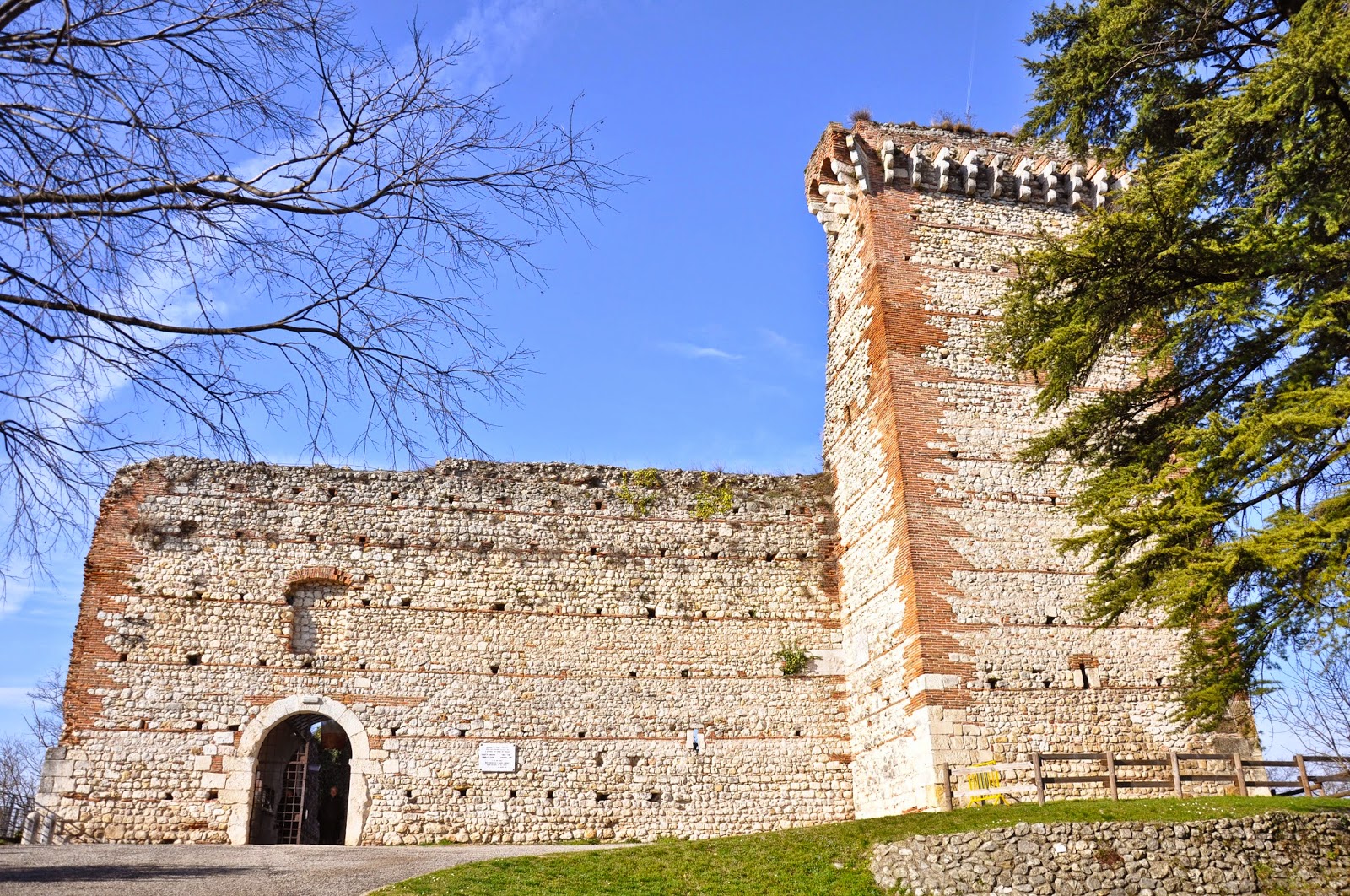 Considering its age, it is rather well preserved. There is a large stage in its courtyard and we put attending a performance there on our Italian wishlist. 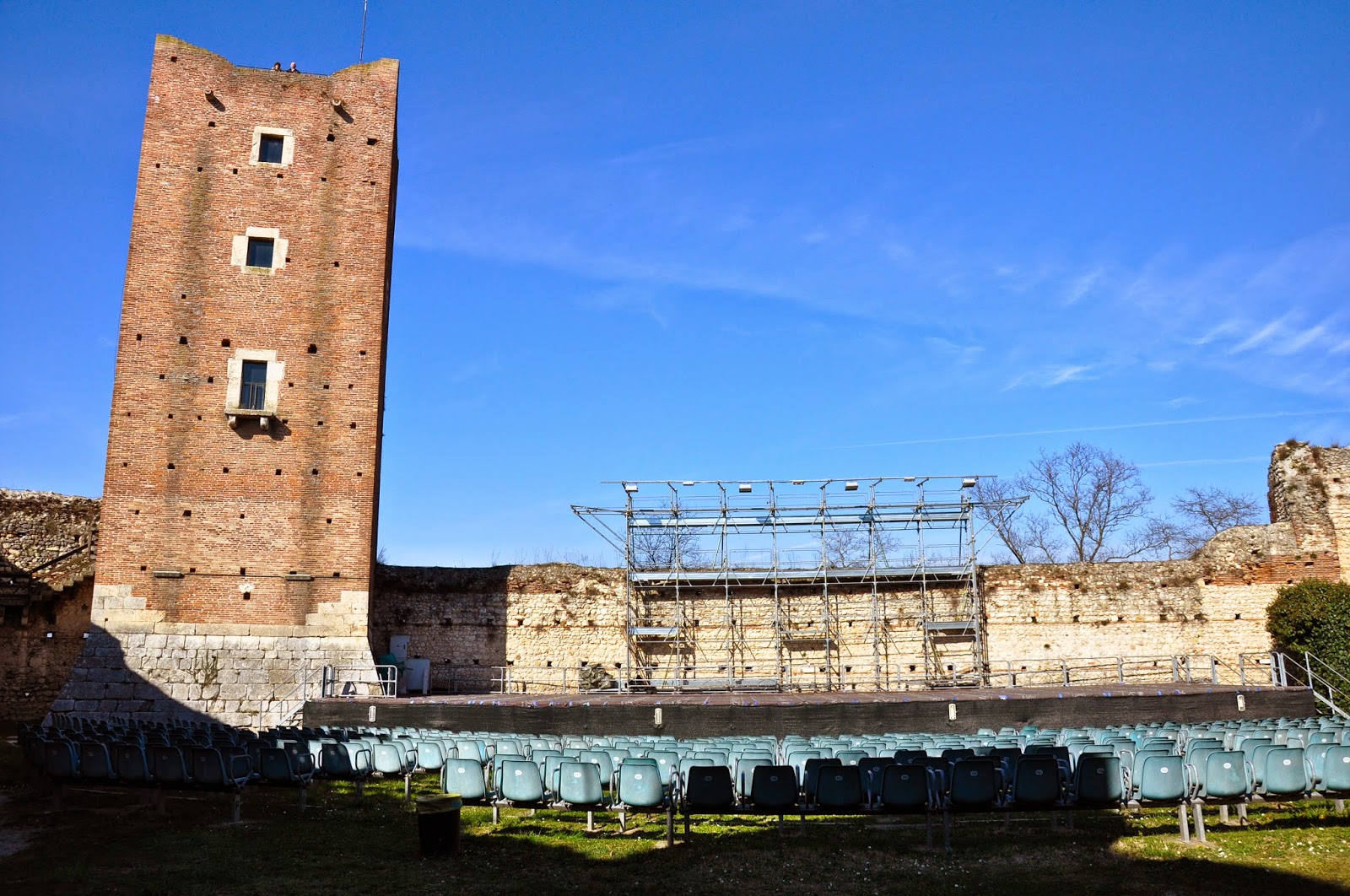 The tower was easy to scale, with each double flight of steps opening into a spacious room. There was a photographic exhibition giving us the best excuse to catch our breath before continuing our ascent. 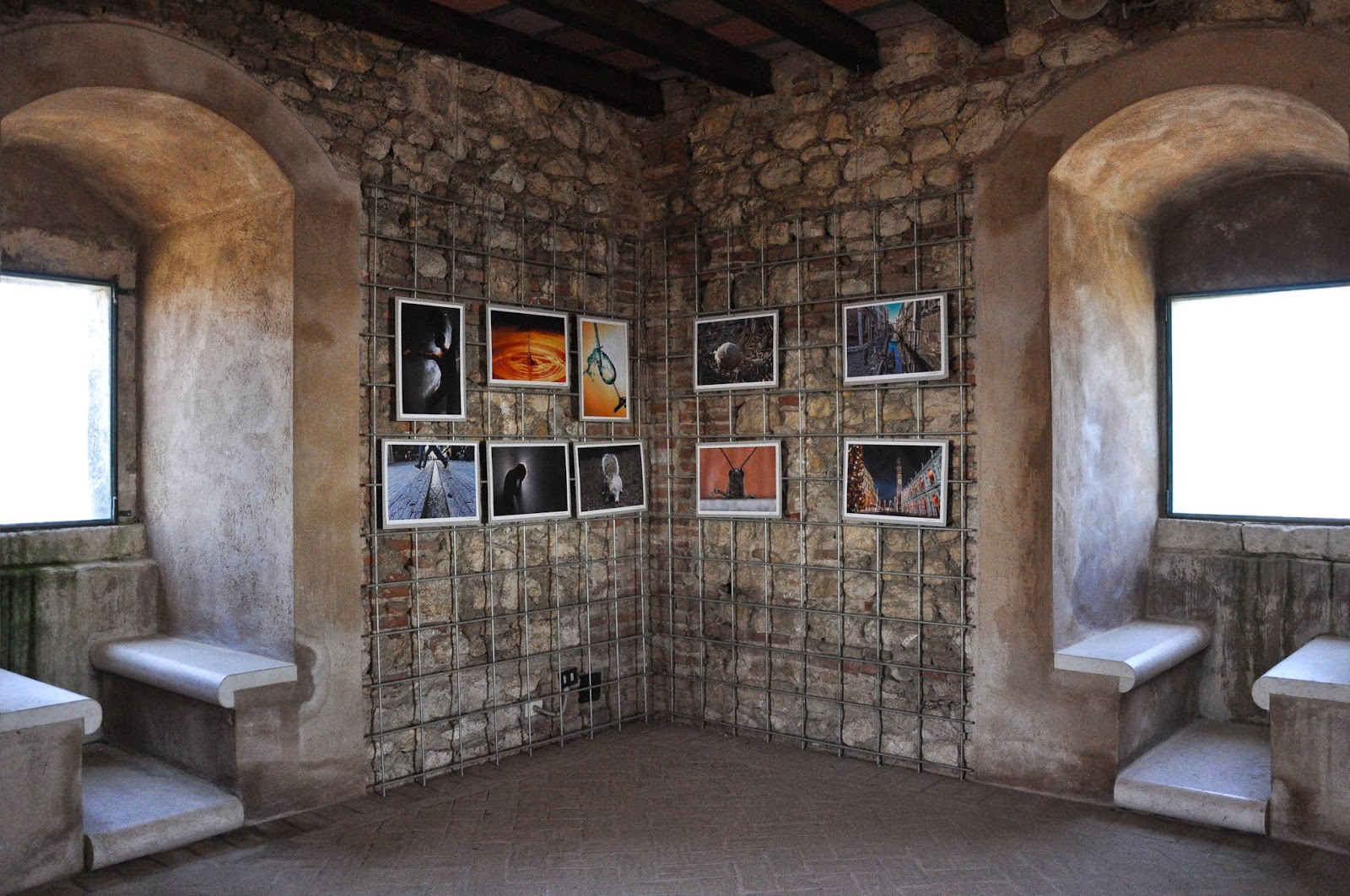 I could also imagine Romeo sitting on one of these benches gazing over to Juliet’s Castle, perhaps waiting for her to appear on the keep and blow him a kiss. 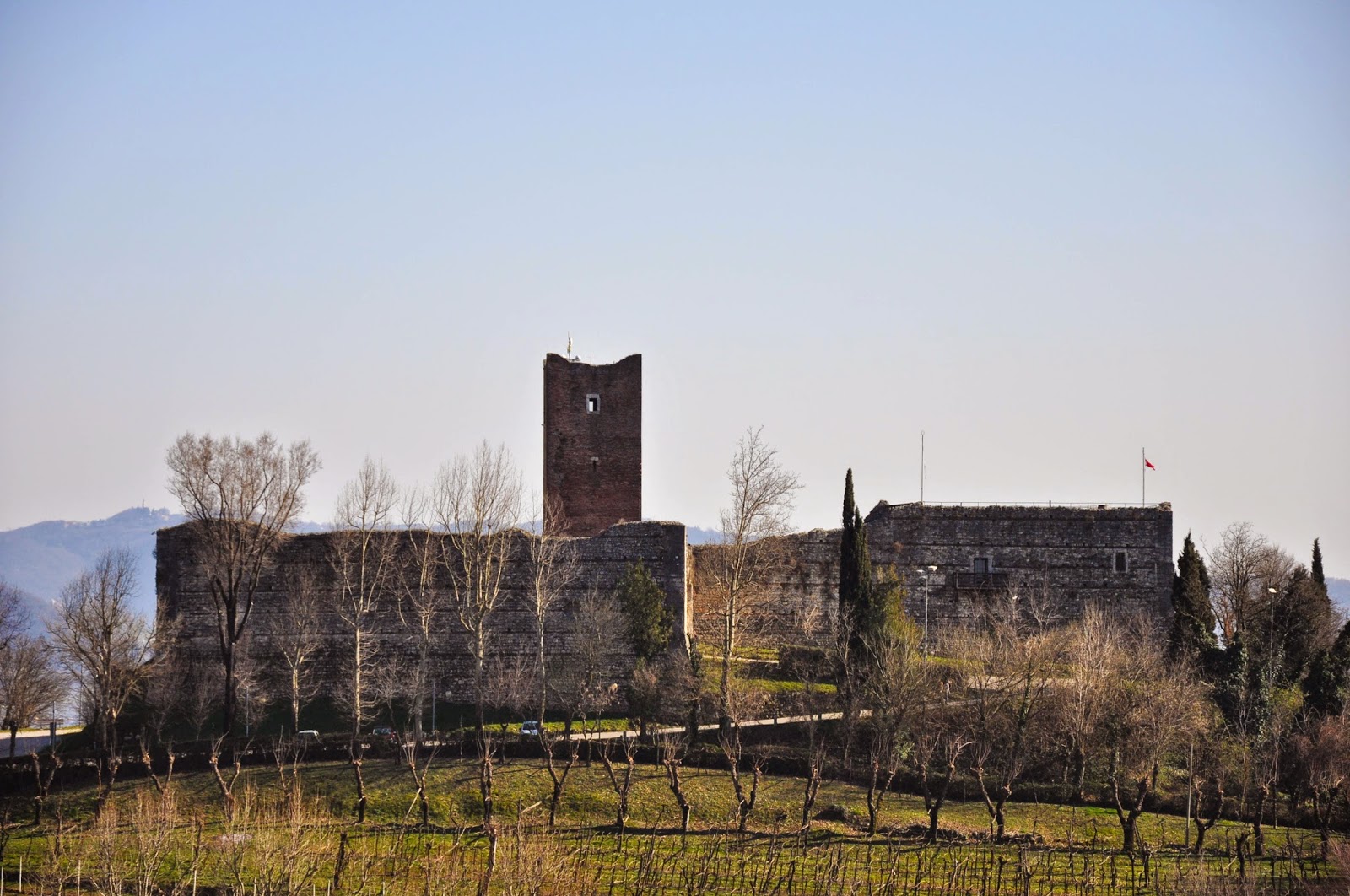 The views from the top of the tower of Romeo’s Castle were breathtaking. The plain of Veneto stretched in front of our eyes, only interrupted by the hills of the Colli Berici. Small towns and villages lay interspersed on the ground down below our feet. On the horizon the snow-capped pre-Dolomites were reaching for the sky. 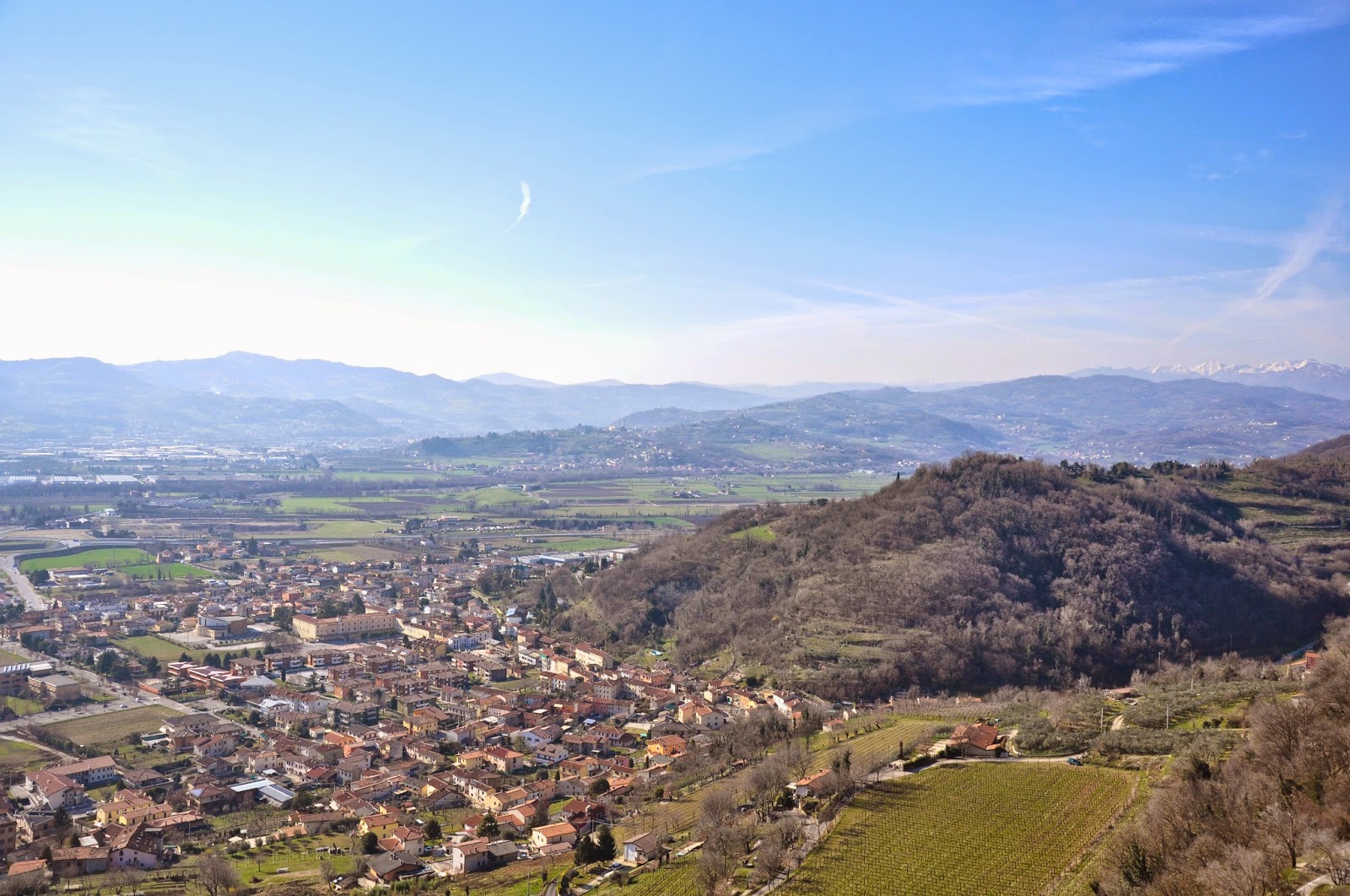 We waved good-bye to the castles of the star-crossed lovers and followed the road back to Vicenza. It was a beautiful day and I felt lucky we spent it zigzagging through the Italian countryside caressed by the warm sun. 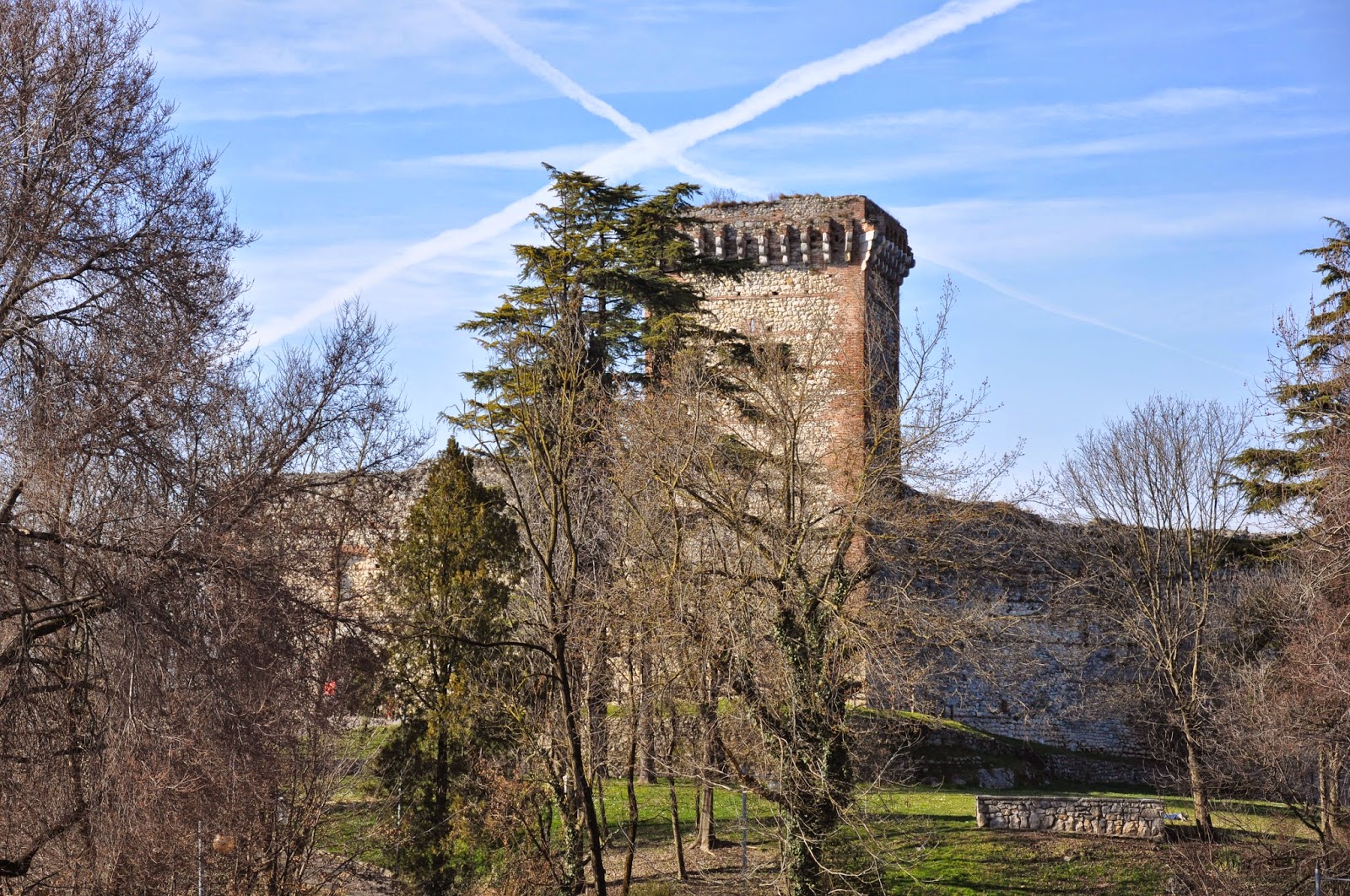