This post may contain affiliate links. At no cost to you, I may receive a small commission if you click and make a purchase through them. Full details in my Disclosure.
Share
Tweet4
Pin
WhatsApp
Email
Share
Reddit
4 Shares
They’ve been looking at me since my first day in Vicenza. They’ve been calling my name and appeared to me in the guise of many different flavours – chocolate, jam, honey, sugar coated, raspberry, plain and even crème patisserie.
Meet the Brioches – a sweet family of crime against any calorie-limited diets.
Apparently the Italians have them for breakfast together with a cup of coffee, the combined injection of sugar and caffeine giving them wings to face the day and be able to make all those hand gestures they proverbially do when they talk.
I see brioches everywhere when I go for a walk around town. Coffee shops, patisseries and bars sell them either in large metal trays, seemingly straight out of the oven, or daintily arranged underneath glass domes. I marvel at their size and their many fillings. At the beginning though I couldn’t quite comprehend why they are called a ‘brioche’ when they look so much like a croissant.
Well, once you have had an Italian brioche, the difference from the classical French croissant becomes crystal clear. Firstly, brioches are much less crumbly and they produce nothing of that avalanche of debris that I seem to cover myself with every time I bite into a butter croissant (sometimes it looks like the table and the floor ate as much of the croissant as I did). Secondly, brioches are slightly chewy, but they also melt in the mouth. When you tear a piece off one you see that its texture is quite porous and bread-like, looking like a nice honeycomb. Thirdly, brioches are also quite sweet, which is emphasised by their even sweeter fillings (apparently a croissant is a true croissant only if it’s plain or, as a last resort, filled with almond paste). Last, but not least, let’s not forget their size! Brioches are huge. One is enough to spoil your lunch for hours, if you make the mistake I made to have a brioche at 11 am, whereas croissants can be pretty dainty, especially in Paris, apparently, where I once had to order two for breakfast each morning and still not feel quite satisfied. Or, maybe, this is just me.
Anyway, as I like having a goal in mind, when I wheeled my baby out for her daily stroll in town this morning, I decided that my one and only goal today was to go to Vicenza’s snack places and take some irresistible pictures of brioches and then enjoy one of the subjects as a mid-morning pick me up.
The first part of the plan was easier said than done. Try taking pictures when you are pushing a buggy or holding a baby! It can be surprisingly tough, as you never have both of your hands free at the same time. It’s difficult to quickly find the right angle and people soon start staring at you, so you can’t be sneaky, take your picture and nonchalantly leave.
Here, however, is my first attempt.

At the next place, I asked them politely if I could take some pictures of their brioches and they said yes. In all honesty I do pop in there quite often, so I didn’t feel that bad about asking. Unfortunately for me, the light was very harsh, so no great photo results again, but the brioches there are always nice, huge and with a lot of cream.

It was now close to 11 am and, as per plan, time to treat ourselves to a brioche. For this, I chose to go to Venchi, as their chocolates and ice-creams are divine and I had high hopes for their brioches, too. We were also very close to their Corso Palladio branch.
In we went!

I had been to Venchi in London a few times in the past, always having a wonderful time enjoying a gelato or some chocolates. What I like about its Vicenza branch though is that the people behind the counter actually take time to serve you, explain things to you, give you a little sample to try if you are unsure about a flavour and bring you a glass of water to the table, if they think you’ve overdosed on chocolate. This is so unlike shops in London, where you usually get treated simply as the next customer due to the overwhelming number of people there.
I pretended I was busy choosing what to have, all the time eyeing this:

Obviously, I ordered one with Venchi’s spreadable cioccolato. I never waste time with jam, if I can have the real stuff.
It has to be said that the brioche was good! Let’s have one more nostalgic look at it. 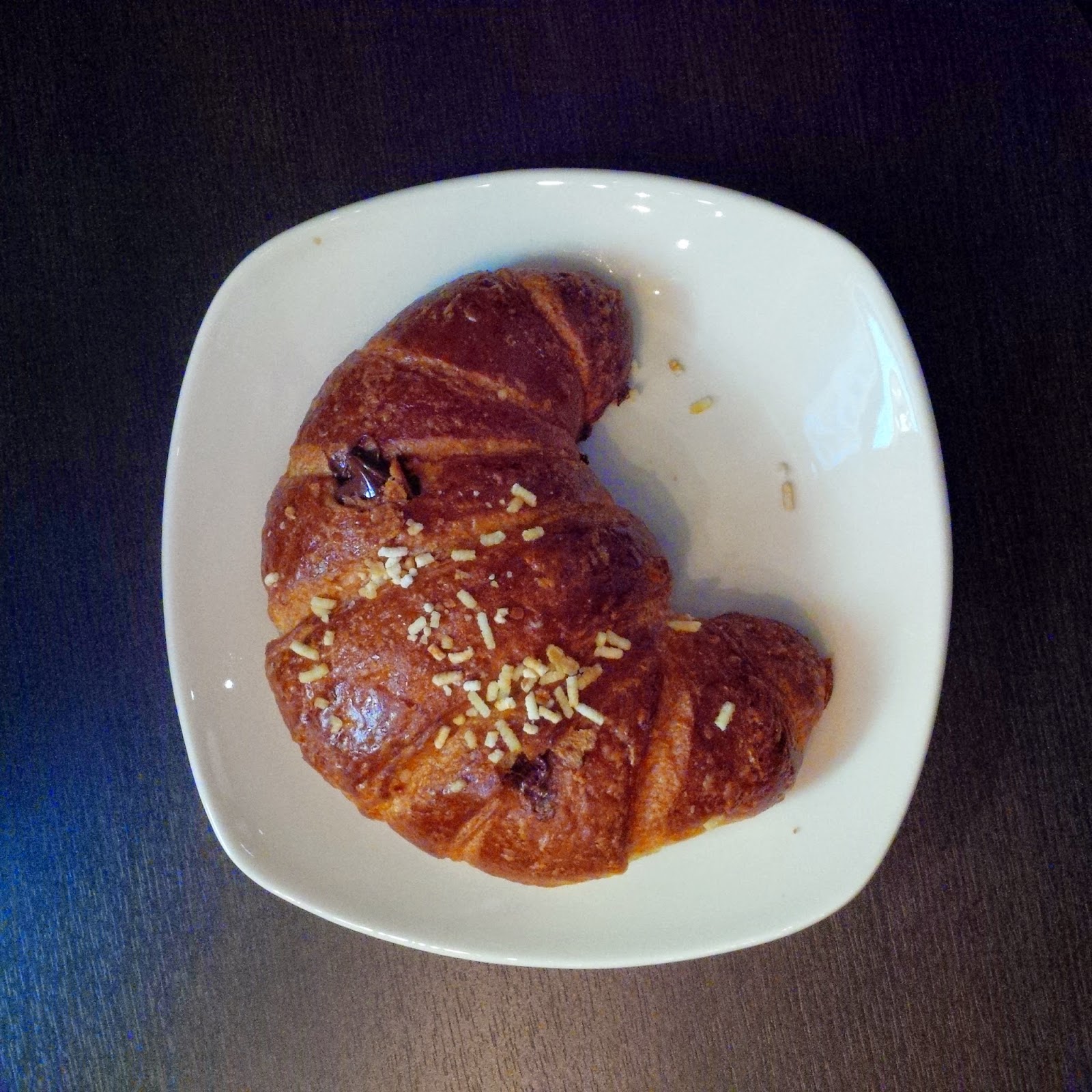 And then it was gone!