Skip to Content
Thank you for stopping by! This blog post reflects my first-hand experience. It may contain affiliate links and if you click and make a purchase through them, I may receive a small commission at no cost to you. The ads on this page help me keep this blog free and produce new travel content for you to enjoy. Full details in my Disclosure.
106 shares

This is the place where all roads converge in Varna. Everyone knows where it is and how to get there from any point in town. Countless of people arrange to meet friends there every single day. It is part of Varna’s history and urban mythology.

Varna’s Cathedral of Dormition of the Mother of God, colloquially known simply as The Cathedral, stands on a large crossroad the four arms of which take you in the four major directions in town: Asparuhuvo Bridge to the South, the large districts stuffed with panel blocks of flats to the West, the beach resorts to the North and the central part of Varna to the East.

A heavy flow of traffic thunders all day by the proud building. The main taxi rank in town is right at its feet. Large groups of tourists invariably visit it every day to tick it off their list of things to see and do in Varna. And the local people pass by it day after day, their lives interconnected with it. 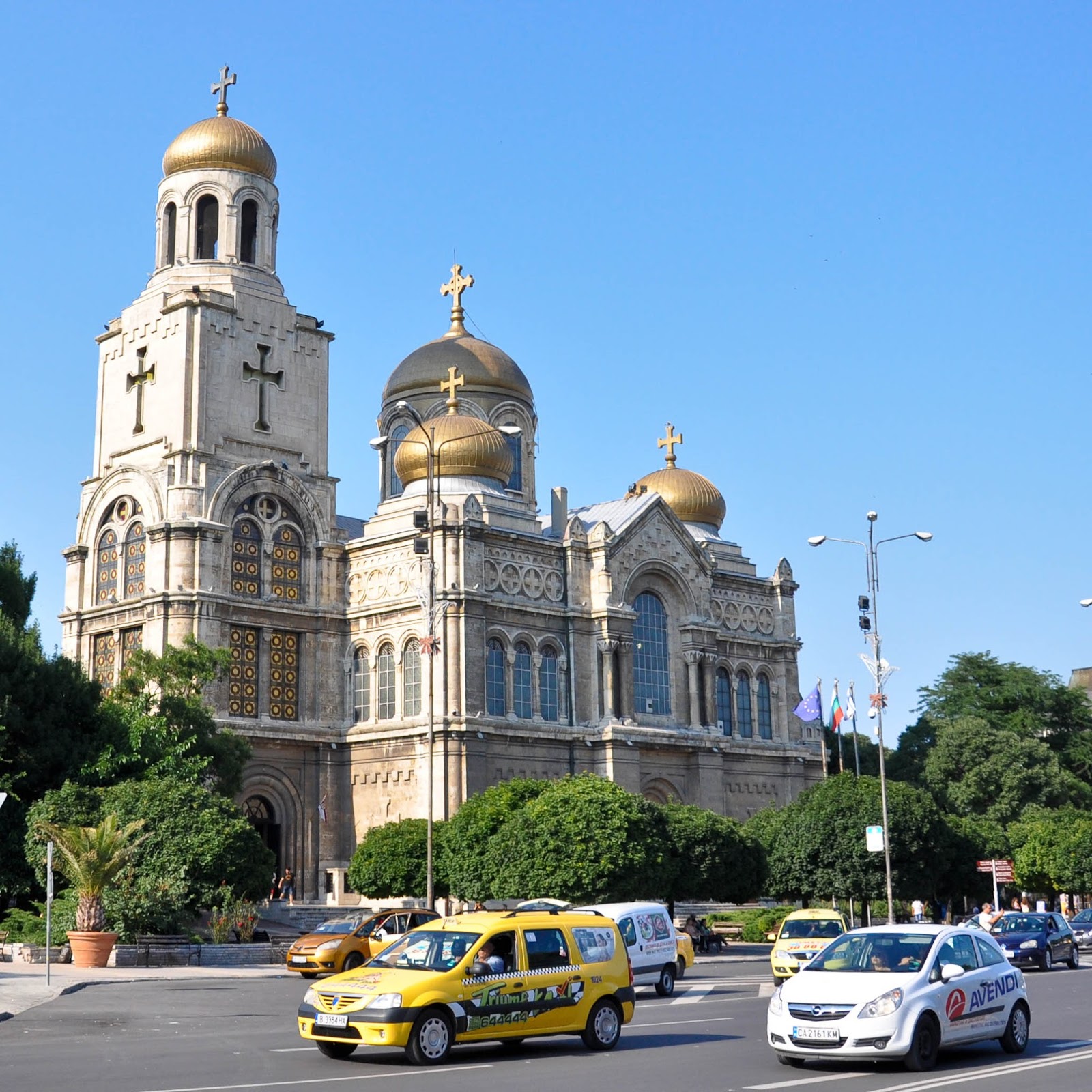 Built between 1880 and 1886, The Cathedral is Varna’s biggest Bulgarian Orthodox temple and the second largest in the country, too. The stone building is so big that you can easily see it from any high point in the centre of town.

Yet, would you believe it that for many years access to it was strictly monitored and controlled and its large windows, now gleaming with stained glass, were completely obscured. 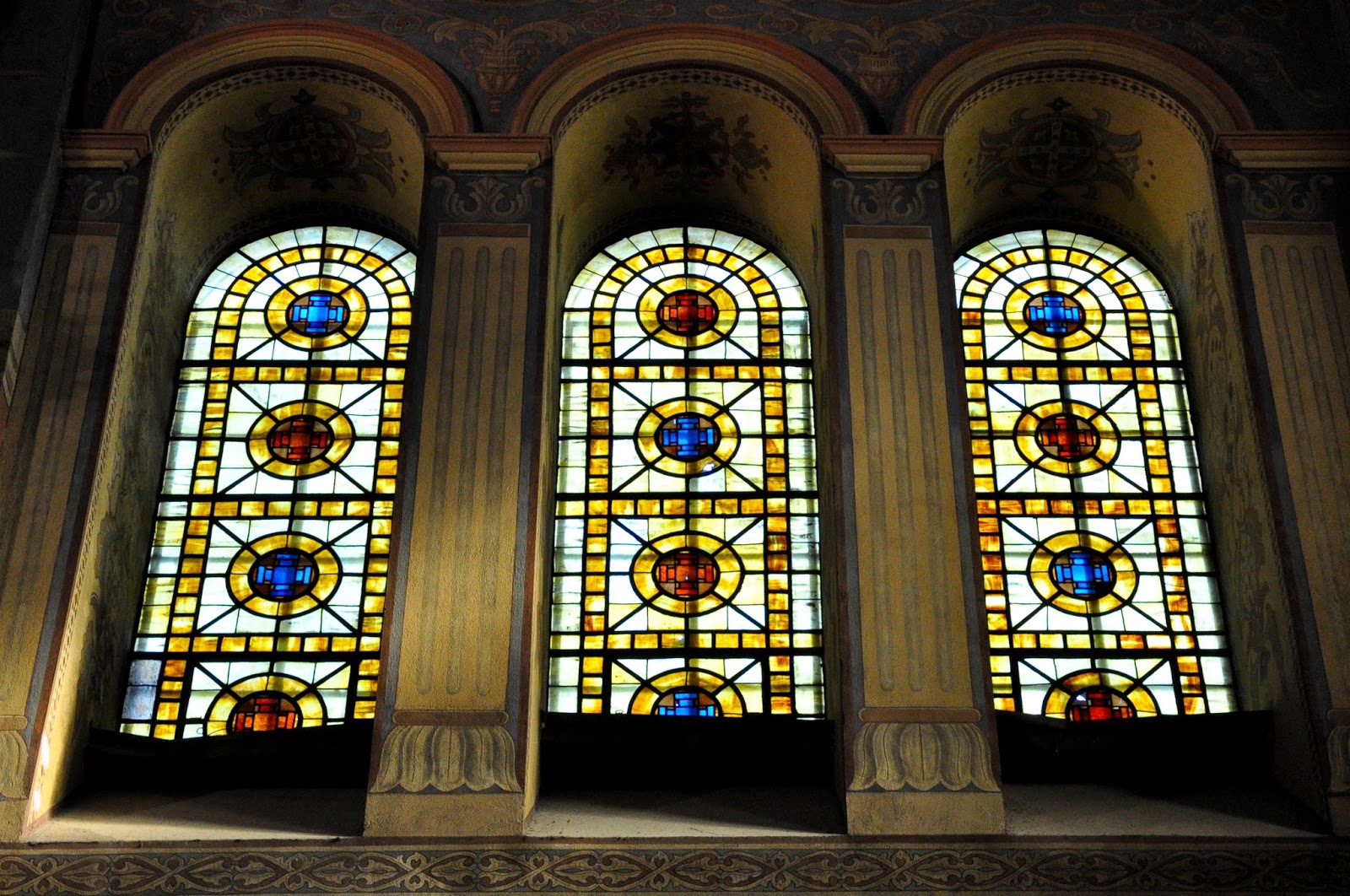 During the four and a half decades that Bulgaria tried unsuccessfully to build a socialist-communist utopia, religion was strictly considered to be an opium for the masses and several generations were brought up as atheists.

One of the repercussions of this was that the whole country had to adopt some newly devised holidays which were in line with the official political thinking. As such Christmas and Easter were abolished and replaced with New Year’s Eve and the First Day of Spring. Instead of Santa Claus, Bulgarian children would look forward to receiving presents from one Grandpa Frost, who was accompanied by a glamorous assistant called Snow White directly imported from the USSR. 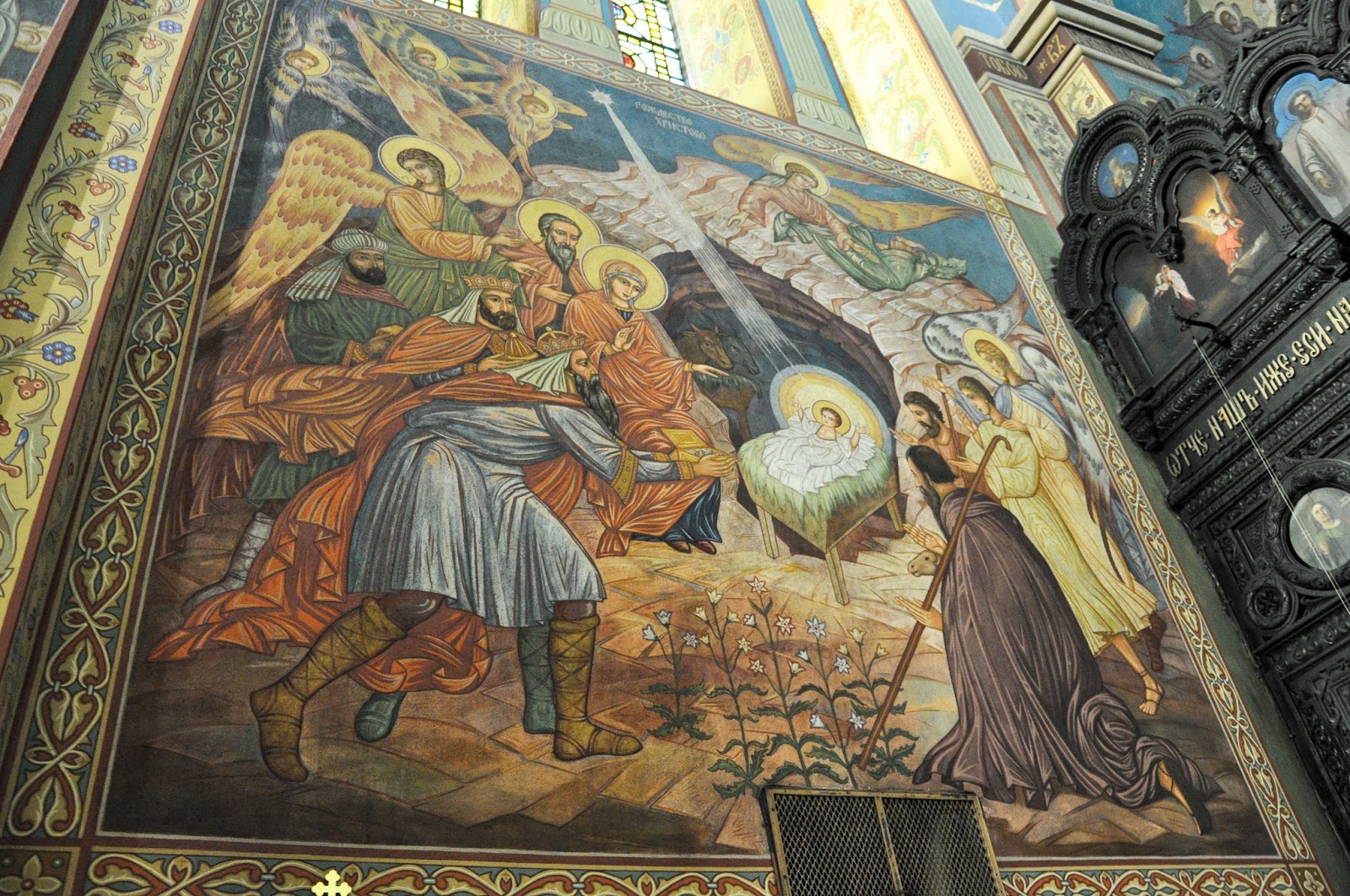 In March, the schools would organise a competition for the best painted egg which was, we were told, in celebration of First Spring.

It was unspoken, but yet understood by everyone that churches were not to be visited, especially around big Christian holidays, when special groups of faithful to the Communist party people would patrol them eager to catch a young or a middle-aged person transgressing the rules. Woe betide you, if you were caught going to church. Your school or place of work would be informed and you would be considered politically untrustworthy which would hinder your prospects of further study or a better job. 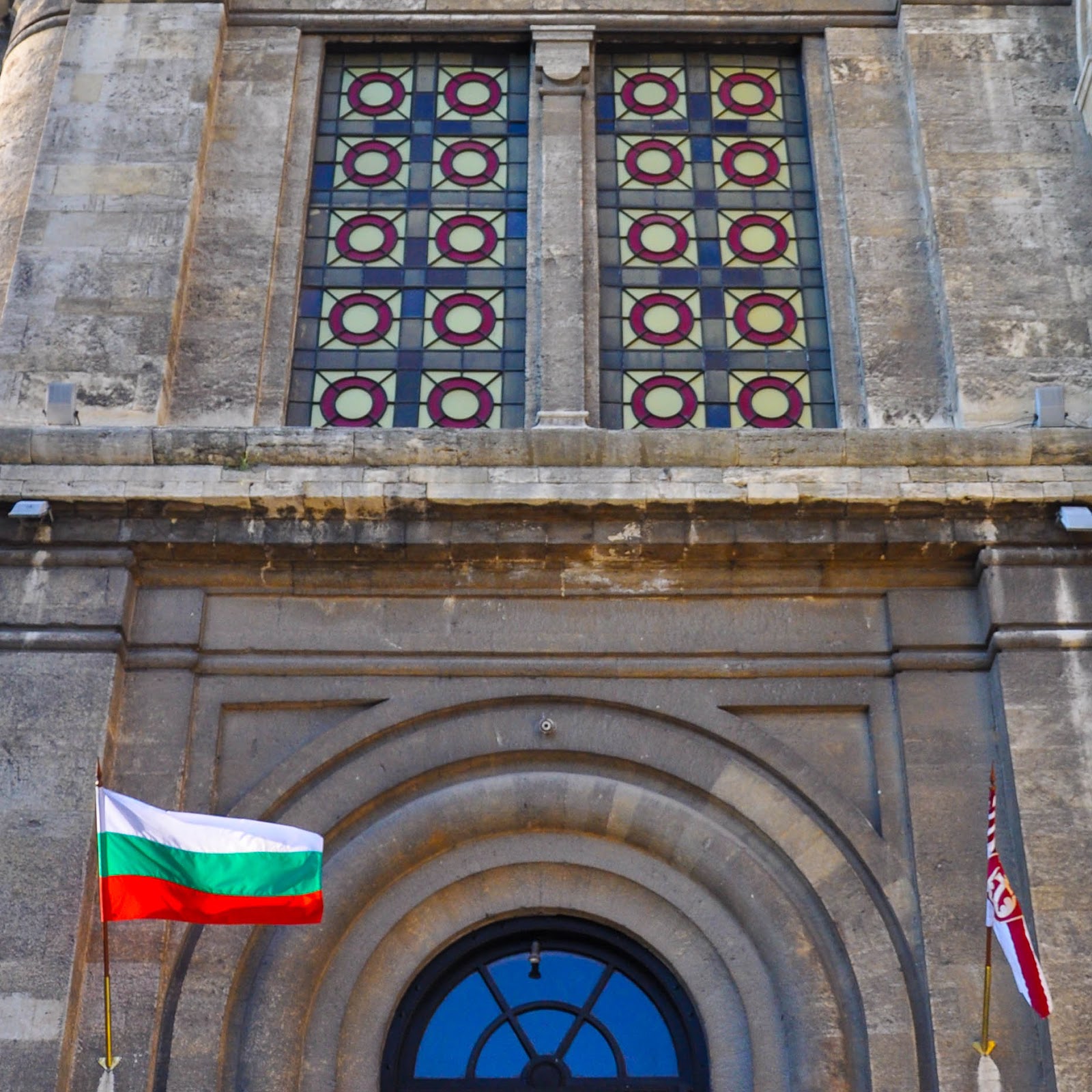 Churches and monasteries were kept sort of functioning, but mainly as historical sights and only old people, too far gone to be saved by the ‘progressive’ regime, would be tolerated to visit them as places of worship.

In this political and social climate Varna’s Cathedral stood up, just like the proverbial elephant, in the centre of the town – we all knew what it was, yet very few of us had been inside it. It is actually quite shameful how a small clique of people tried and almost succeeded to abolish the relationship of the Bulgarian people with the Bulgarian Orthodox Church. Not even the five hundreds years that my country had spent enslaved by Ottoman Turkey had managed to achieve that. 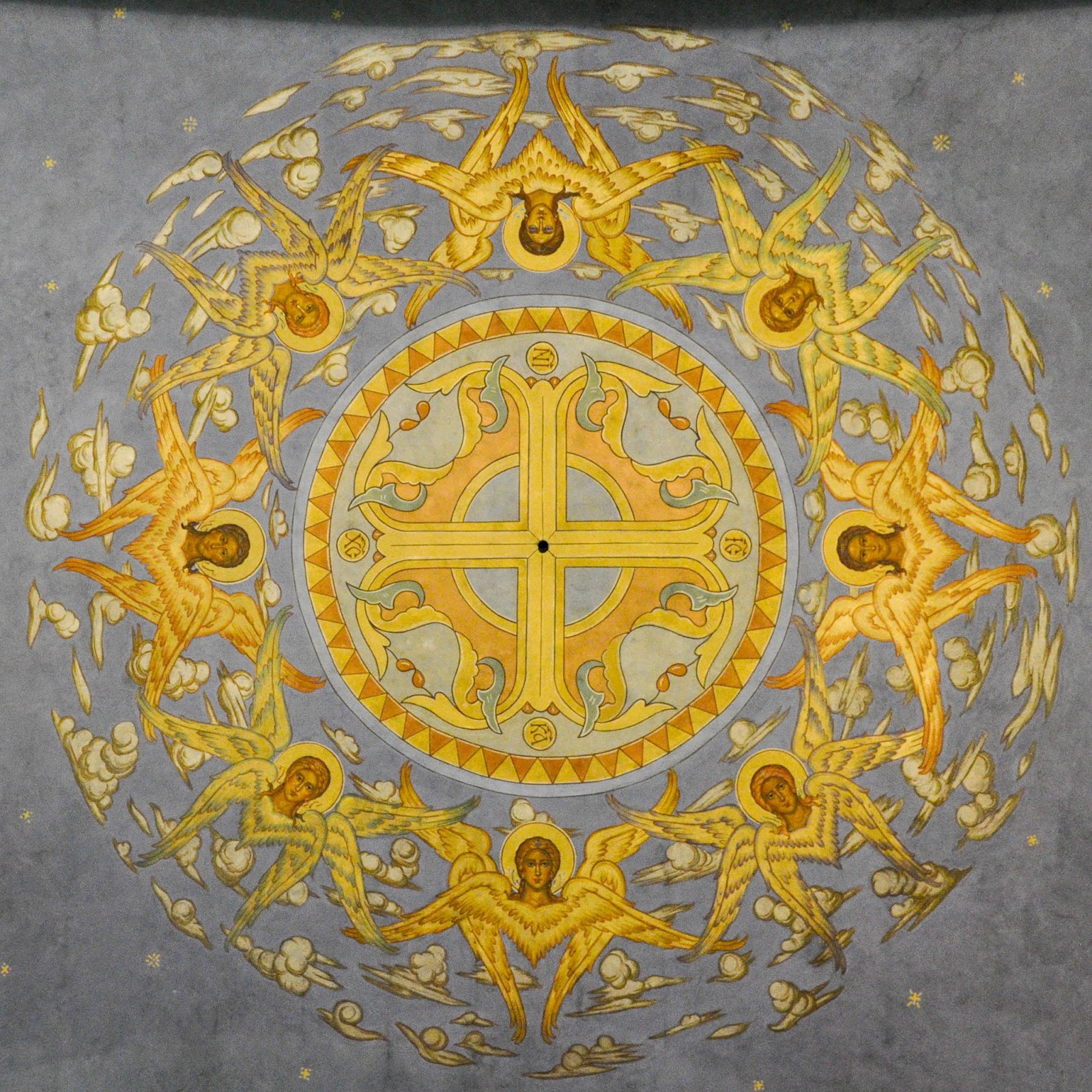 I remember my grandmother going to the Cathedral to buy herself the latest edition of the Church calendar – a small booklet listing the dates of Easter and the other big Christian holidays for the respective year. I would never be invited to go with her.

I was quite excited one day, when after a hush-hush conversation with my mother I was sent to stay with my grandmother and she took me to the Cathedral to have me christened. I was nine at the time. I didn’t understand much of the ritual, I just knew that something almost forbidden was taking place. 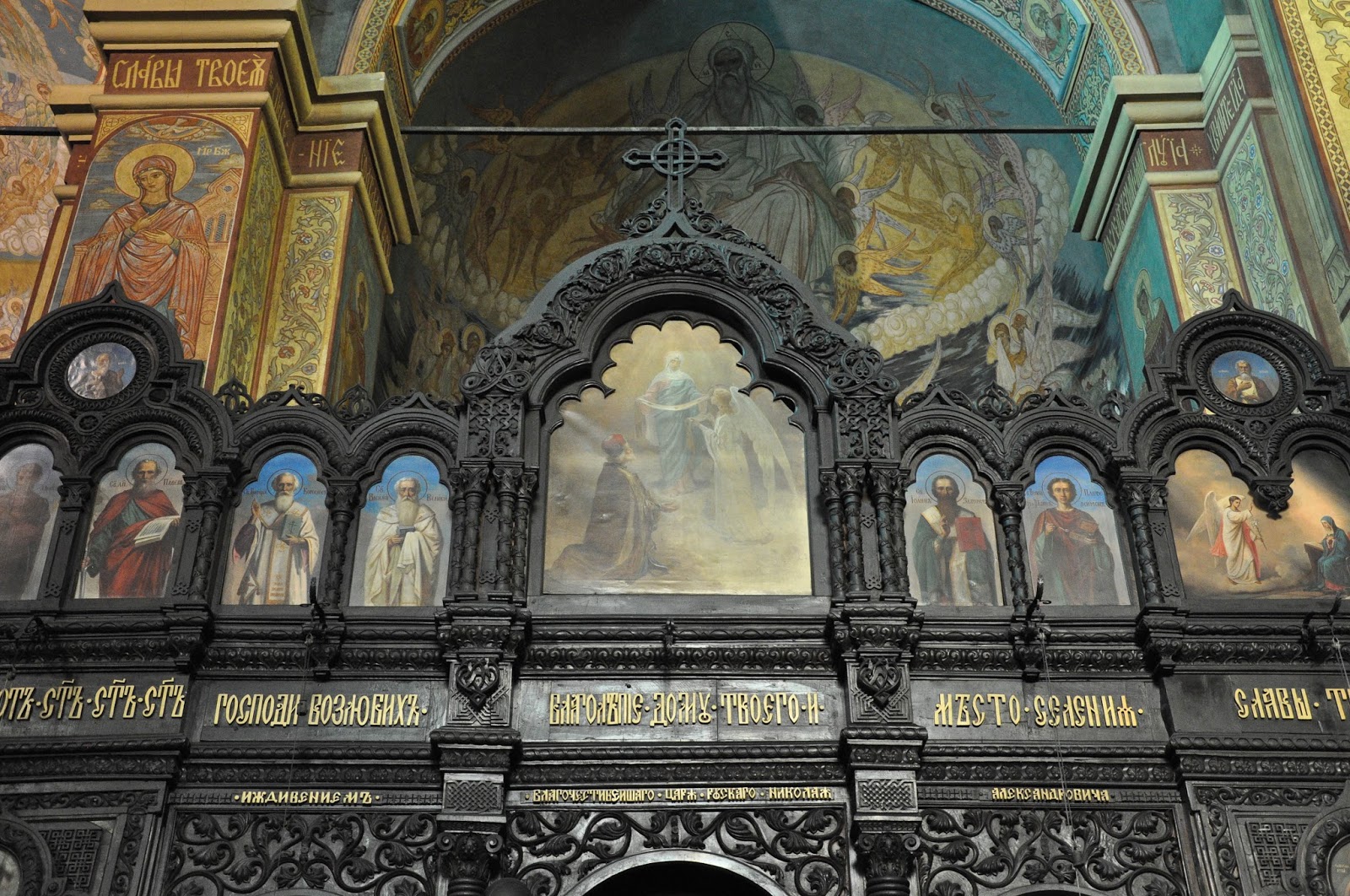 Christenings and marriages were still performed by the Church at that time, but it was all done surreptitiously and without much ado. Also, yes, you could get married in a church, but you had to also have a civil wedding ritual, which legalised the marriage as such.

My christening didn’t happen in the Cathedral itself. Instead, we were in a small room somewhere else. It wasn’t until I was 16 or 17 when I visited the Cathedral for the first time. 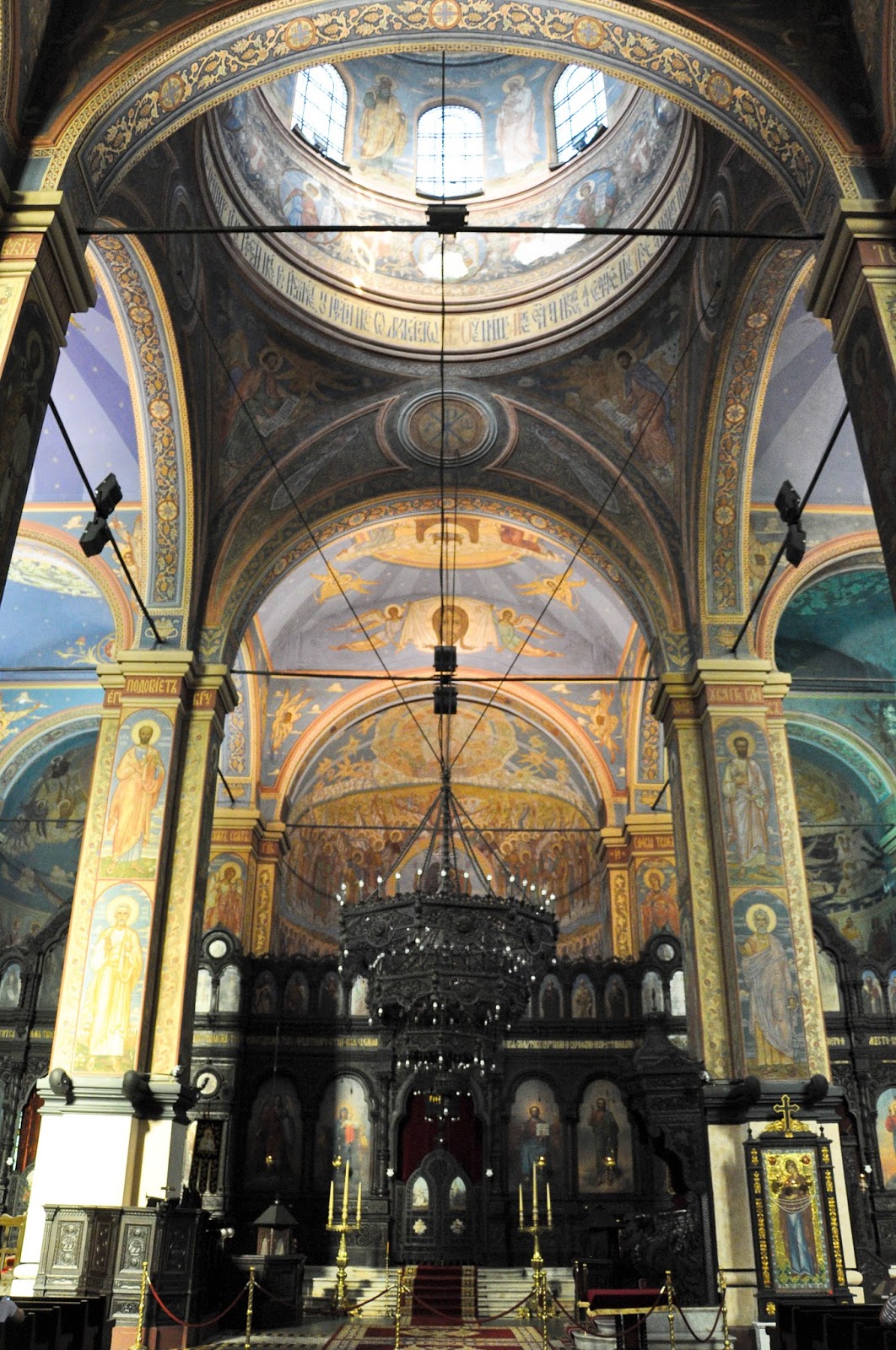 By that point the Berlin Wall had come crashing down and Bulgarian people had found their way back to Christianity with renewed zeal.

I had spent my whole life passing by the Cathedral and using it almost daily as a reference point. I was a bit shocked the first time that I actually stepped over its threshold.

It was Good Friday and the Cathedral was teeming with people. Young and old, they were all standing in a long queue several people thick, waiting impatiently for their turn to pass underneath the table – an Orthodox ritual meant to symbolise the entering of the believers into the grave with Christ. 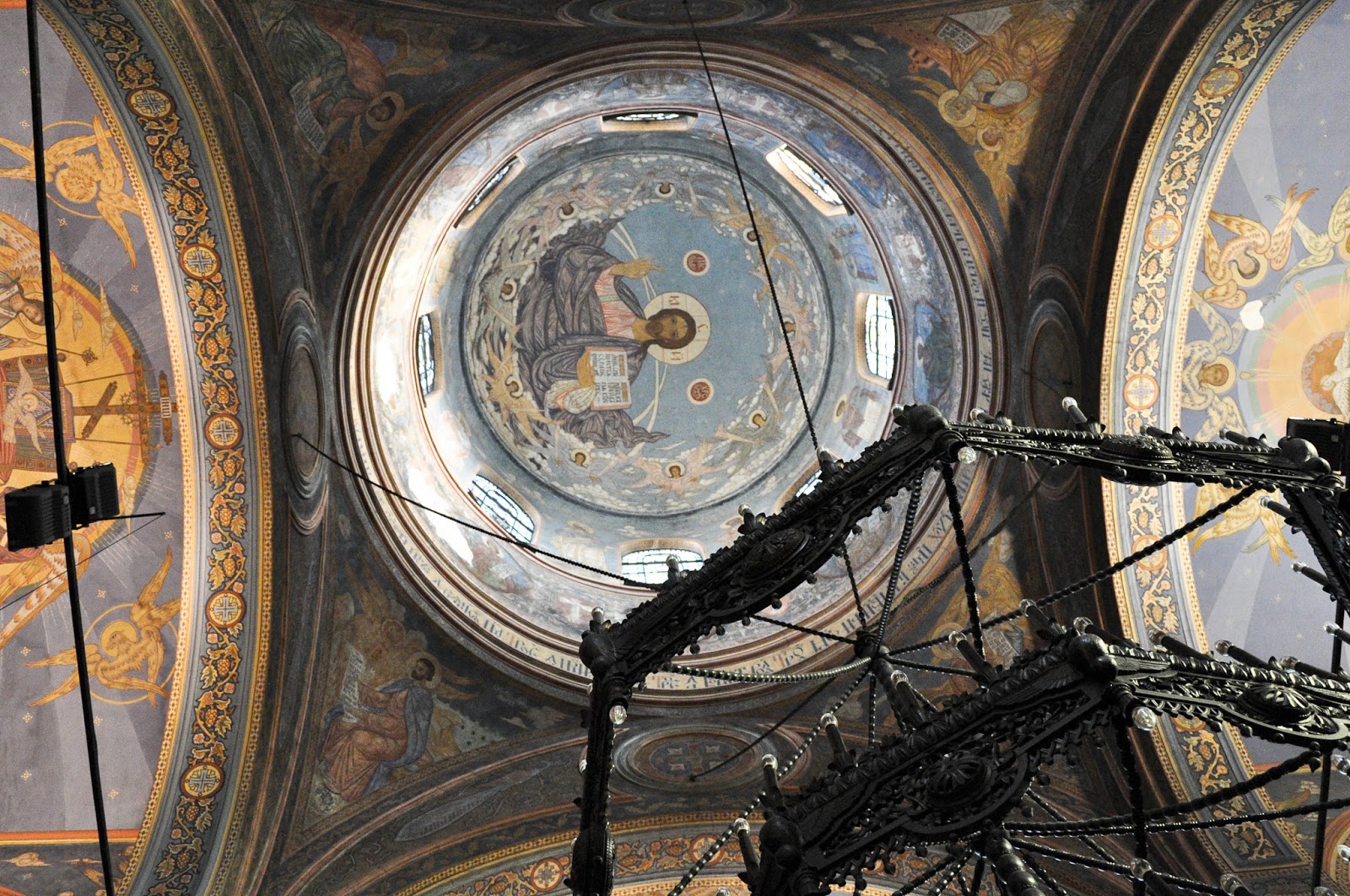 Upon resurfacing at the other end, everyone was kissing with ardour the hand of the priest.

In all honesty, it was all a bit too much for me. Adding to it was my disappointment as the interior of the Cathedral didn’t equal its grand exterior. Its fully frescoed walls were so sooty that I could hardly distinguish the glorious colours underneath. It was obvious that the place had not been taken care of for many decades. A couple of years after this, I was back at the Cathedral again. It was Holy Saturday and a huge crowd of people was surrounding it. In silence we all waited for the light to be brought out of the Cathedral at midnight, symbolising the rebirth of Christ. We all held candles and people would light their candle from the candle of their neighbour and then pass the light to the person next to them. According to the belief, you needed to carry the lit up candle all the way back home and to kindle the light in front of the icon at home with it. 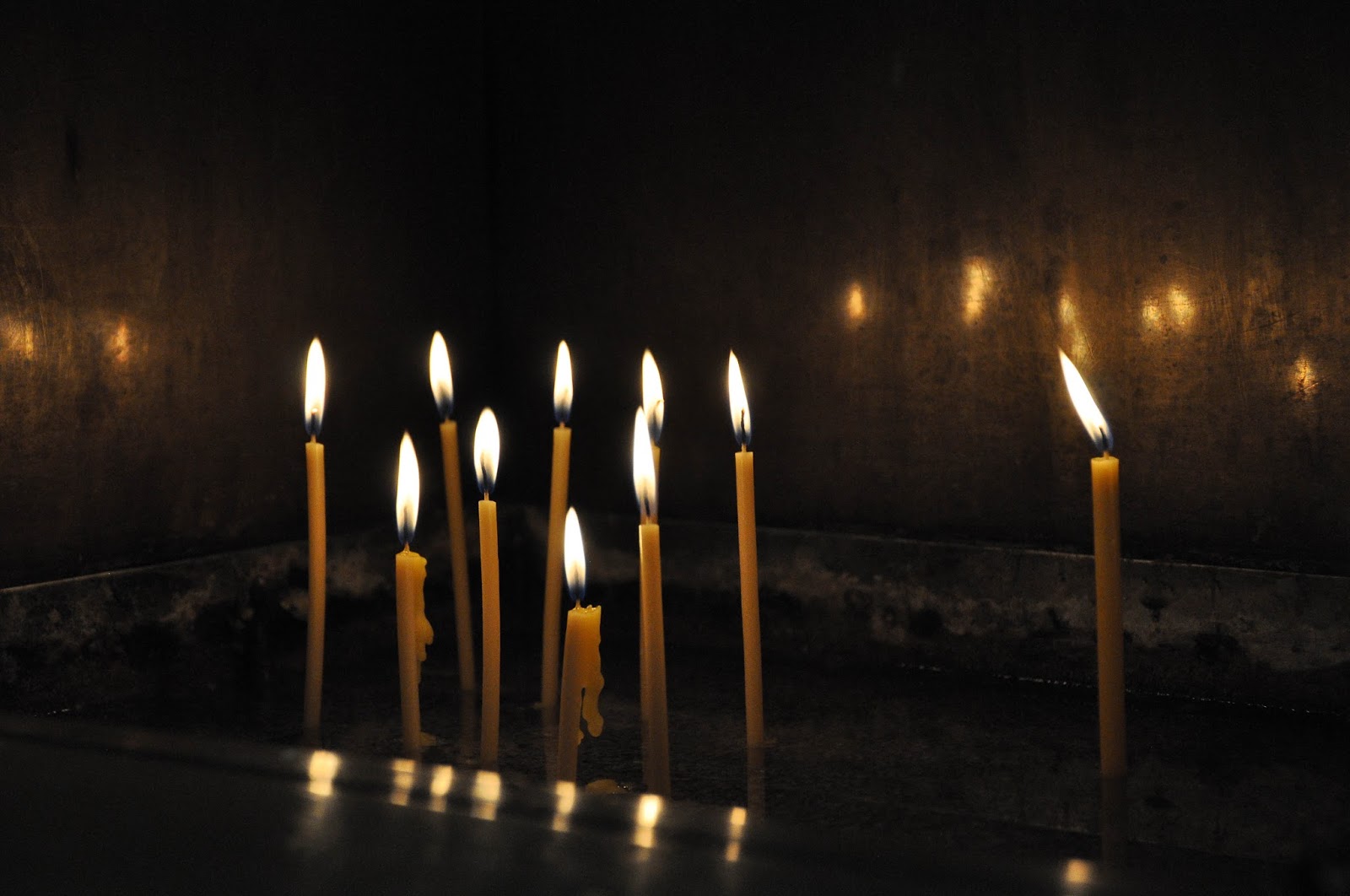 These were the early years of the changes in Bulgaria, when there was still hope in the air and people believed that things would progress steadily forward and our lives would be transformed.

Around the same time, the frescoes of the Cathedral were restored, the panels obscuring the windows were removed and the domes were polished and gold-plated again, erasing forever my childhood memory of the Cathedral’s building totally closed up and with its domes turned green. 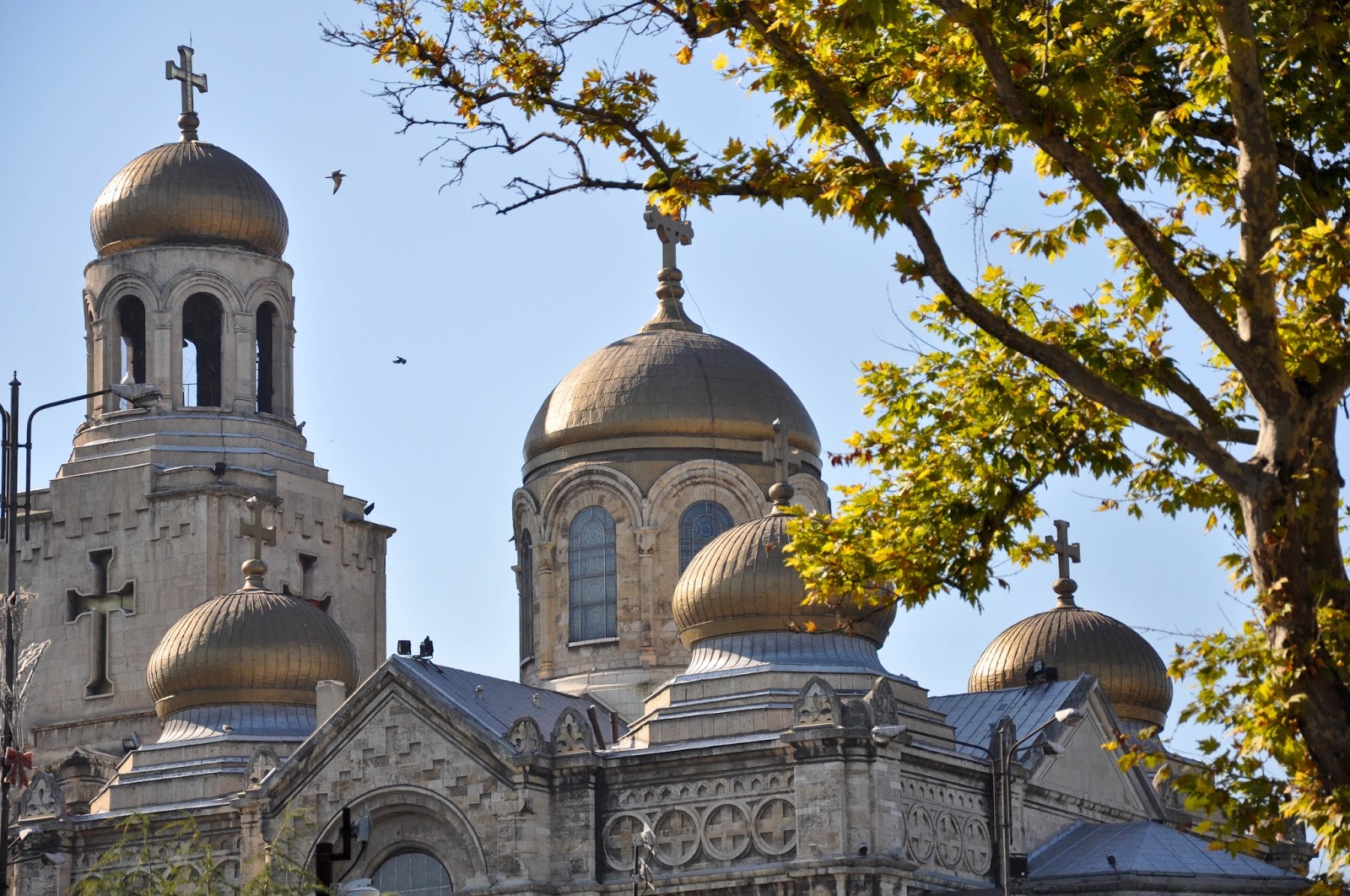 I have seldom been back to the Cathedral since. I still arrange to meet friends in front of it when I am in Varna once or twice (sometimes thrice) a year. Sometimes, I walk in to light up a candle, but don’t linger in.

This Summer I felt the need to go back. I wanted to remember old stories, see how I feel about the place and, also, I wanted to take photos for my blog. 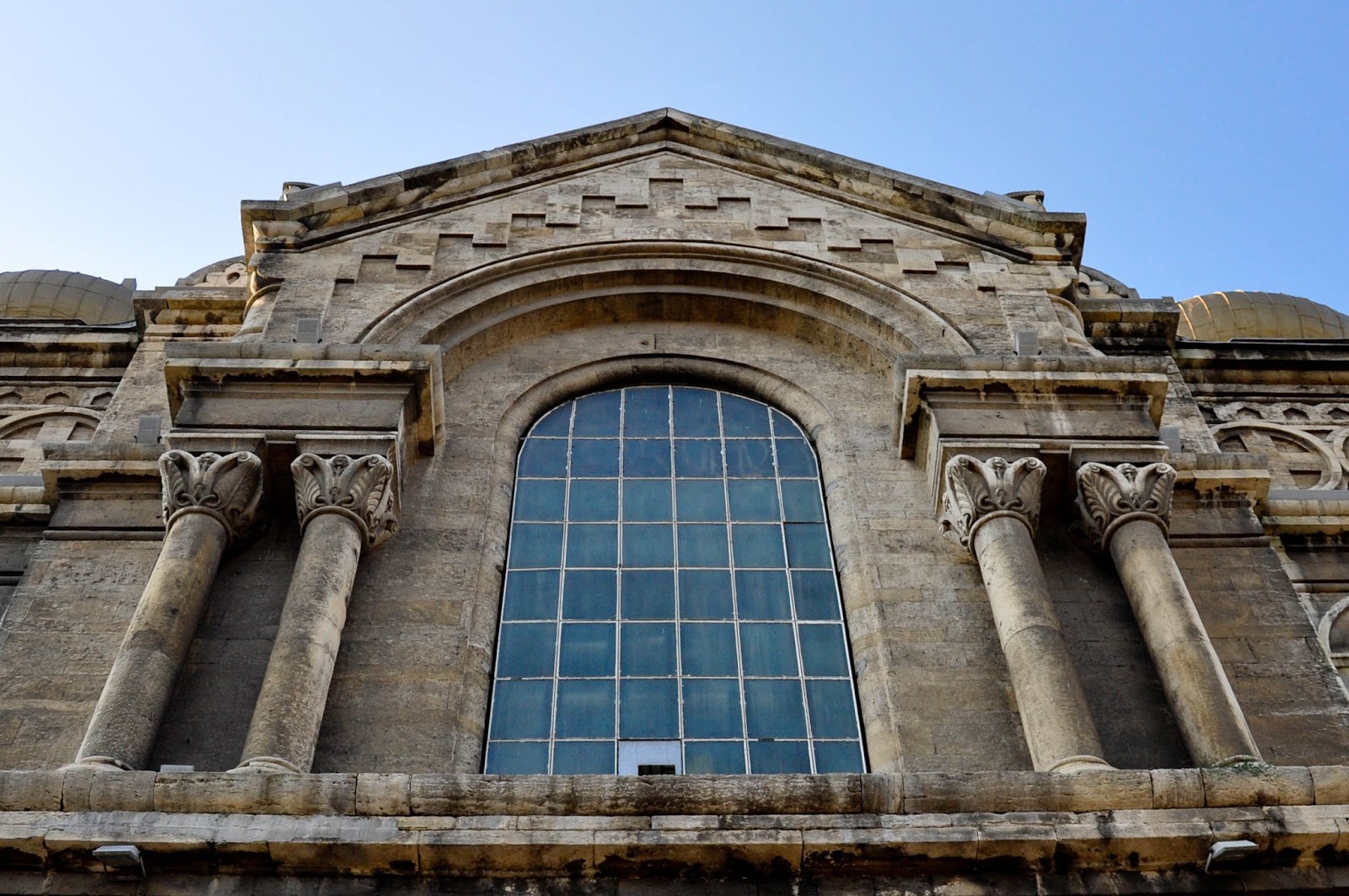 My husband and I walked in the Cathedral’s antechamber and I bought candles to light up for the living and for the dead as the Bulgarian Orthodox tradition stipulates. I also paid 6 levs (around 3 euros) for the right to take pictures in the Cathedral. I was issued with a receipt, which I passed to my husband, as I needed my hands free to hold the camera. Tidily he started putting the receipt in his wallet.

‘Please, don’t!’, I shrieked. ‘As soon as we go inside, they will tell us off for taking pictures and I need to show them the receipt’. ‘They’ were the group of old ladies taking care of the Cathedral or any other church in Bulgaria for that matter. They do small jobs around, help with selling candles and other religious stuff and are always ready to tell you off for whatever transgression they think you have committed in their eyes. 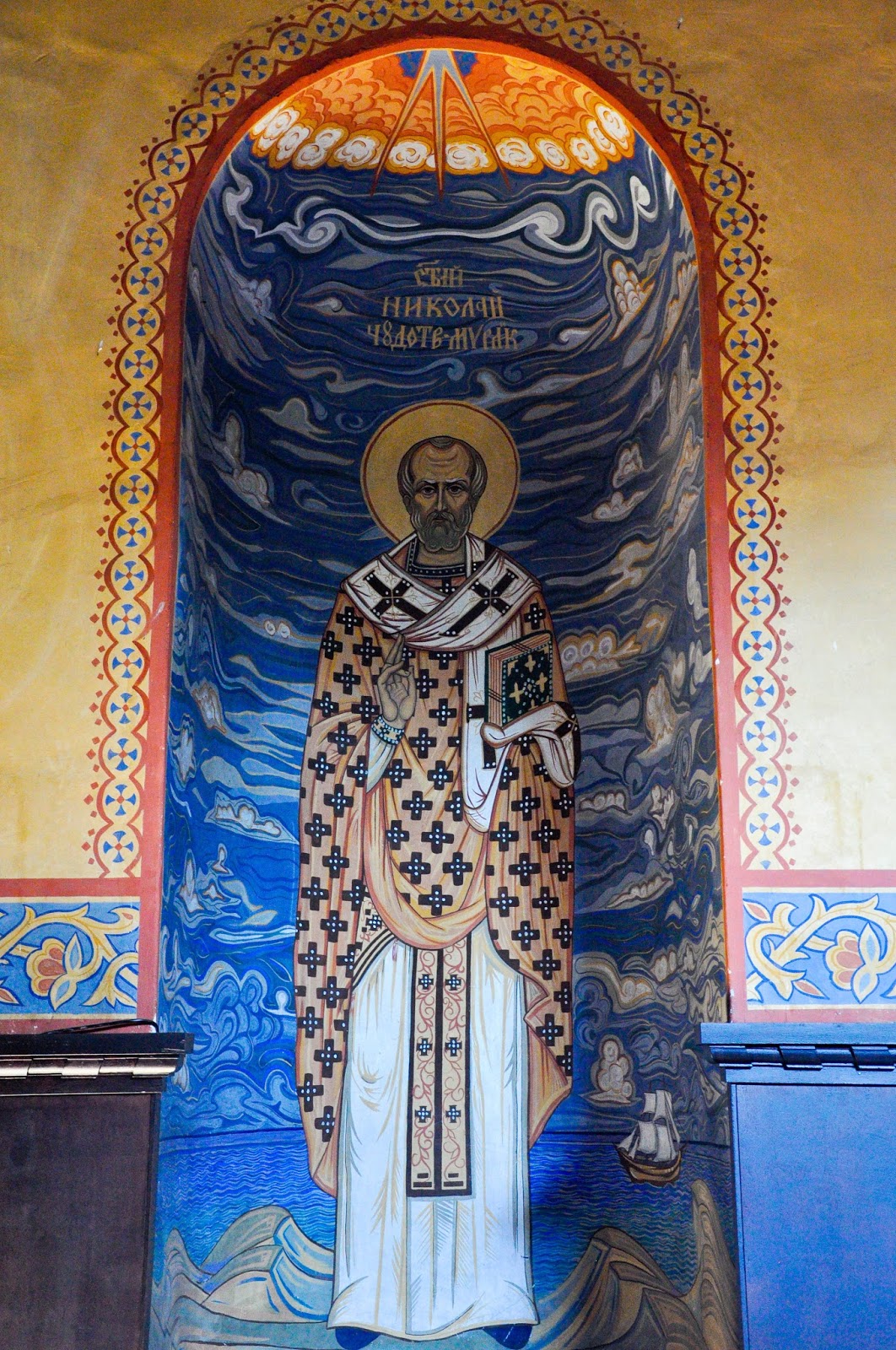 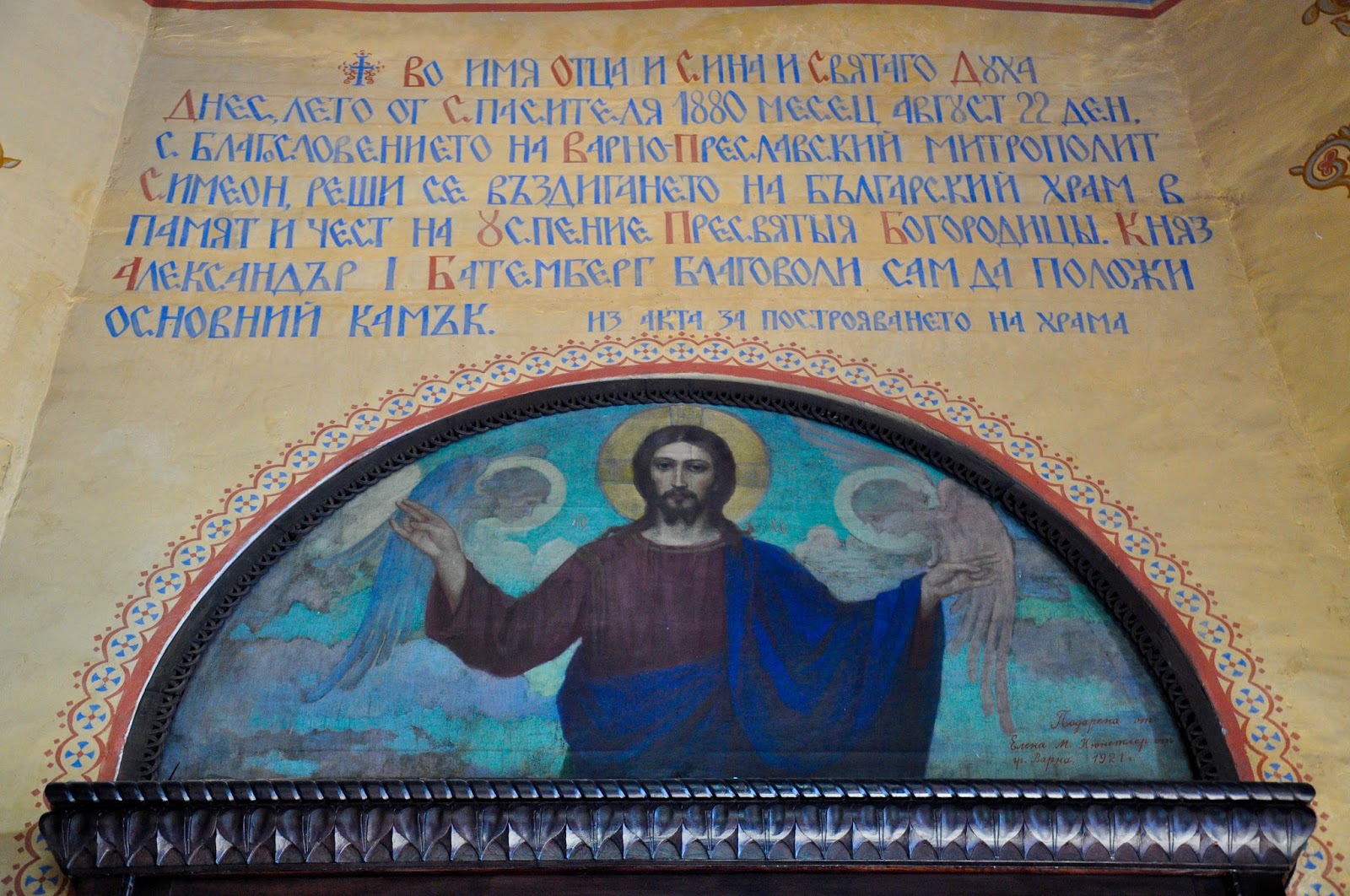 My husband showed the receipt to the first old lady who came our way. I pointed the camera up and just as I was pressing the shutter, there it was, the scream from behind us.

‘Pay 6 levs and then take photos.’

Which was countered by the first lady who had seen our receipt.

‘The man has got a receipt.’

We were left alone, admonishing voices still reverberating around us. 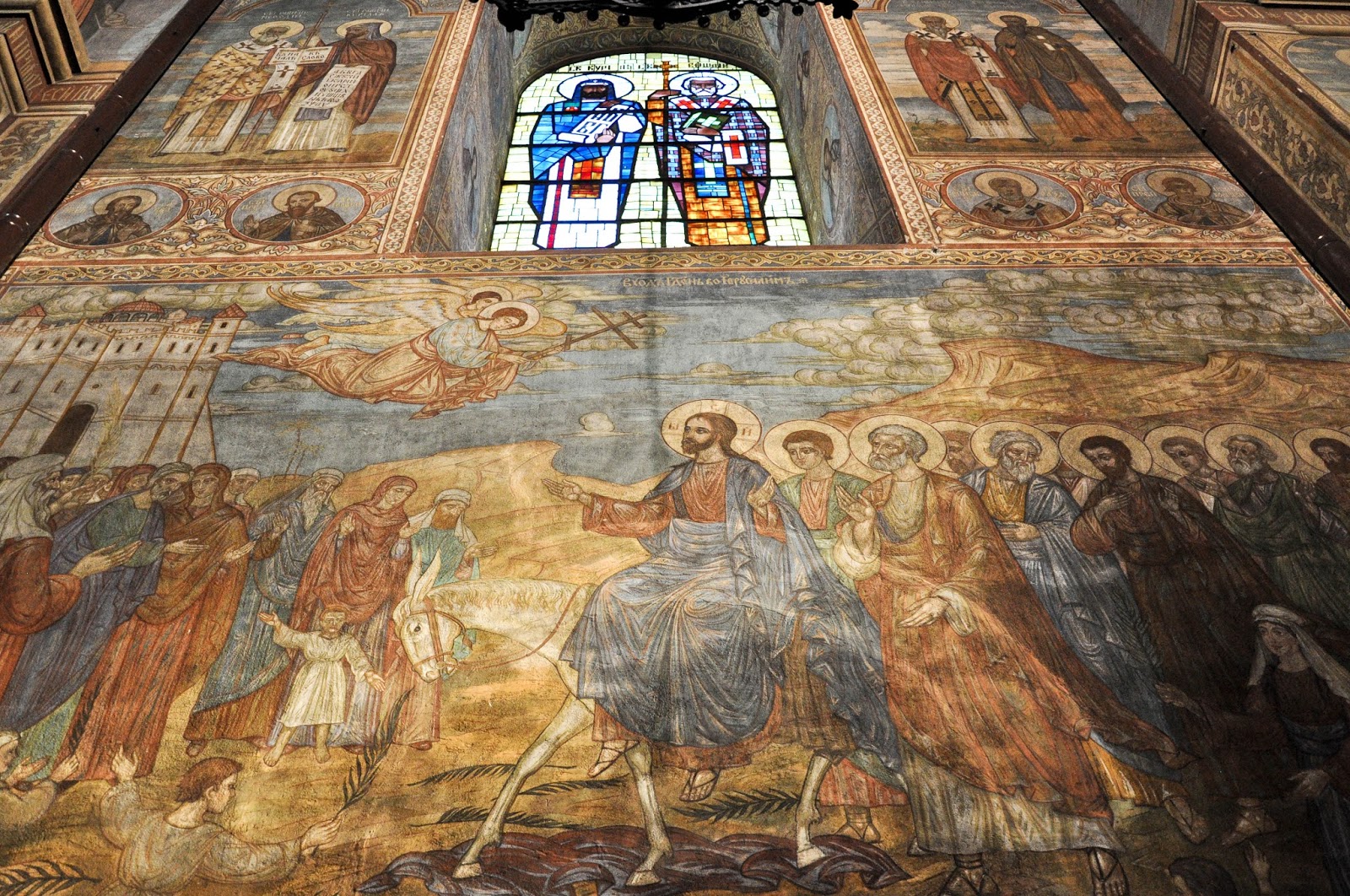 The Cathedral was splendid and I spent quite some time carefully choosing my angles and trying to capture its beauty the way I felt it. 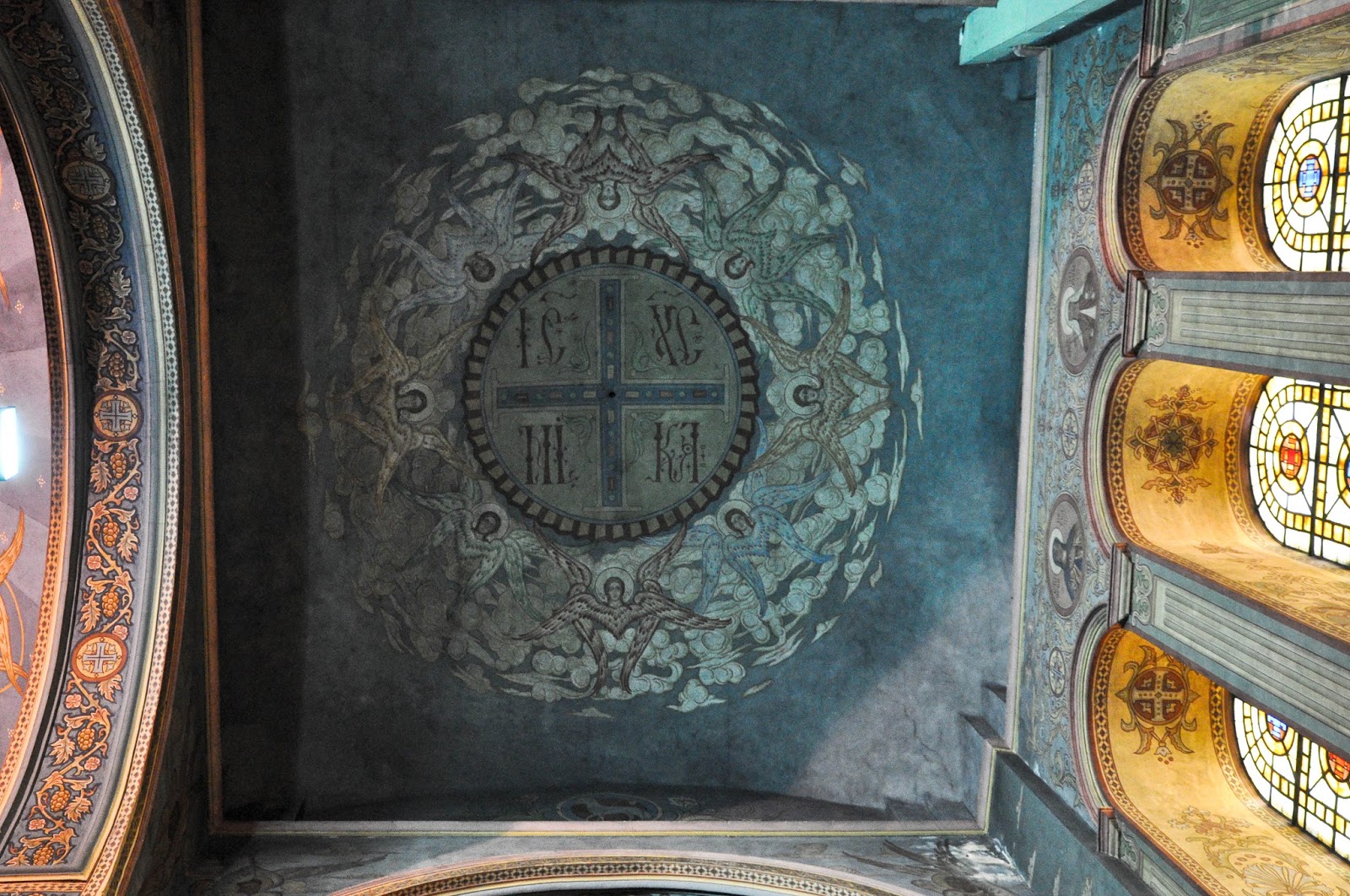 A tall, beautiful girl, fashionably dressed, was praying fervently with closed eyes in front of the big icon of the Virgin. 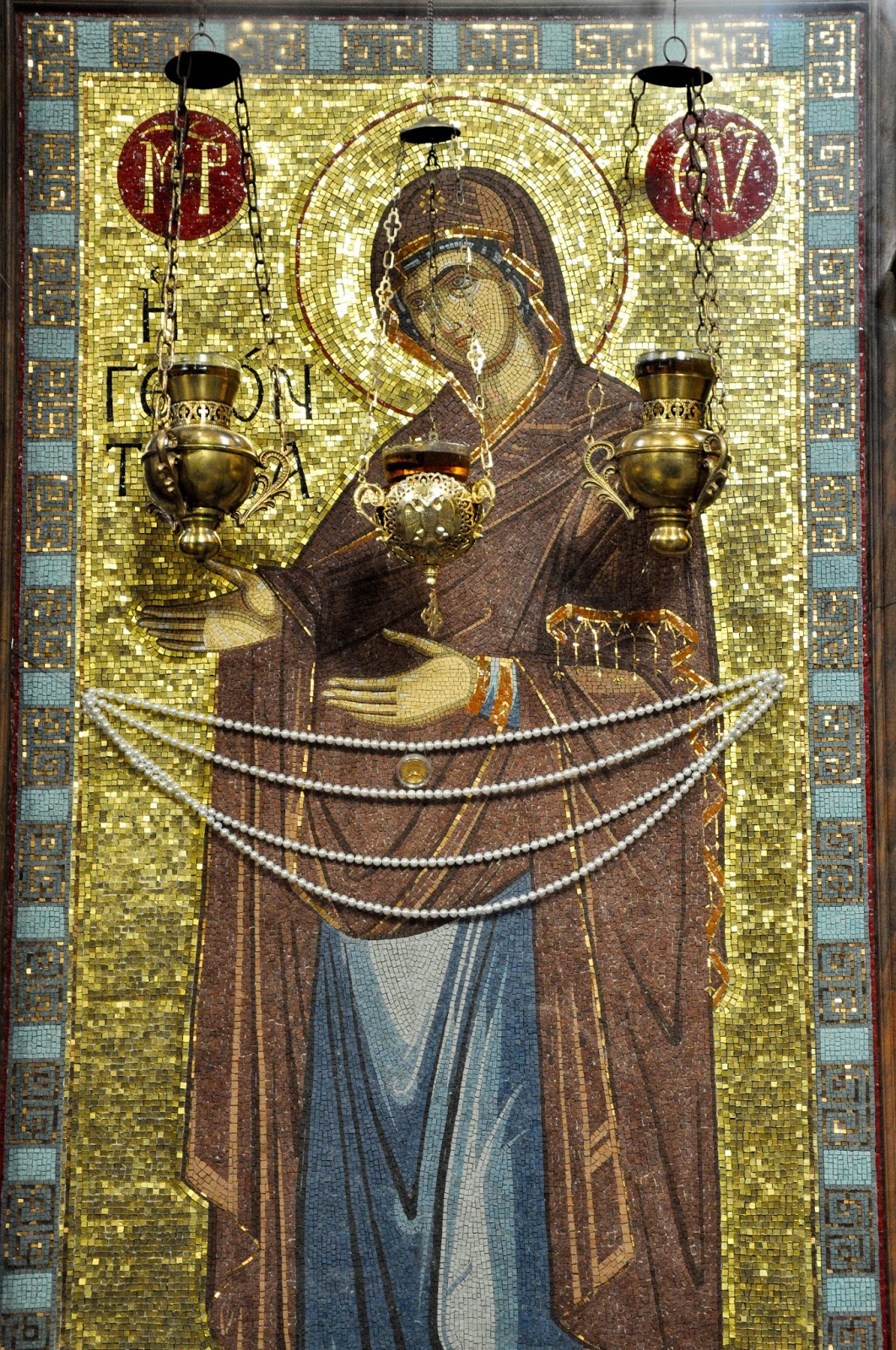 Then she went and lit up a candle and walked over to the icon with it.

‘Come back! You can’t do this!’, shouted one of the old ladies after her.

The girl went back, carefully stuck the candle in the designated place and returned to the icon still praying with all her heart. 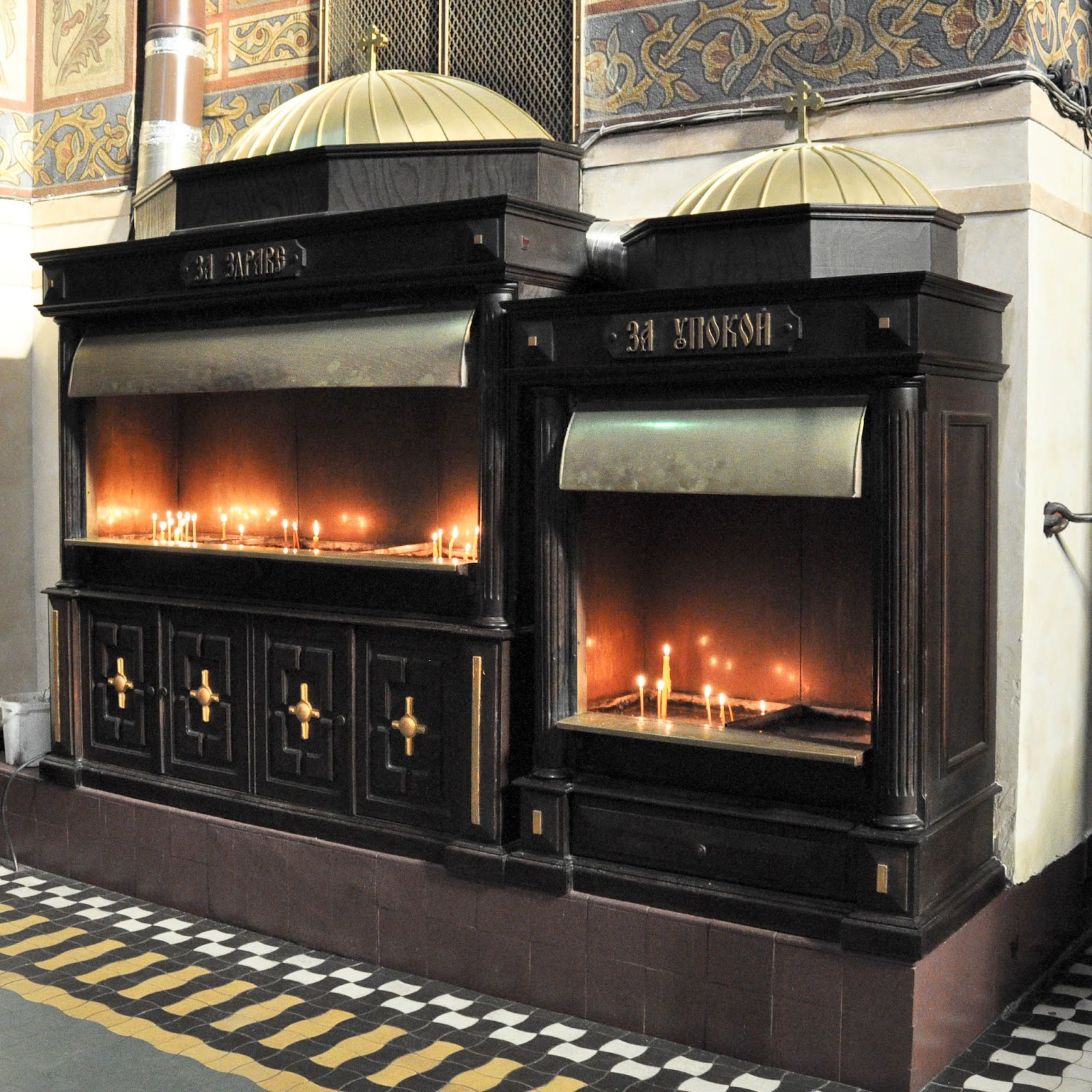 The old lady turned to another old lady and hissed: ‘They are going to smoke our icons all up, make them sooty’.

I understood her concerns, still, pragmatically I thought – if you don’t want the frescoes to suffer, then perhaps stands with electric lights activated by a small donation could be used as other churches do.

I took some more photos and then went to light up the candles I had bought. 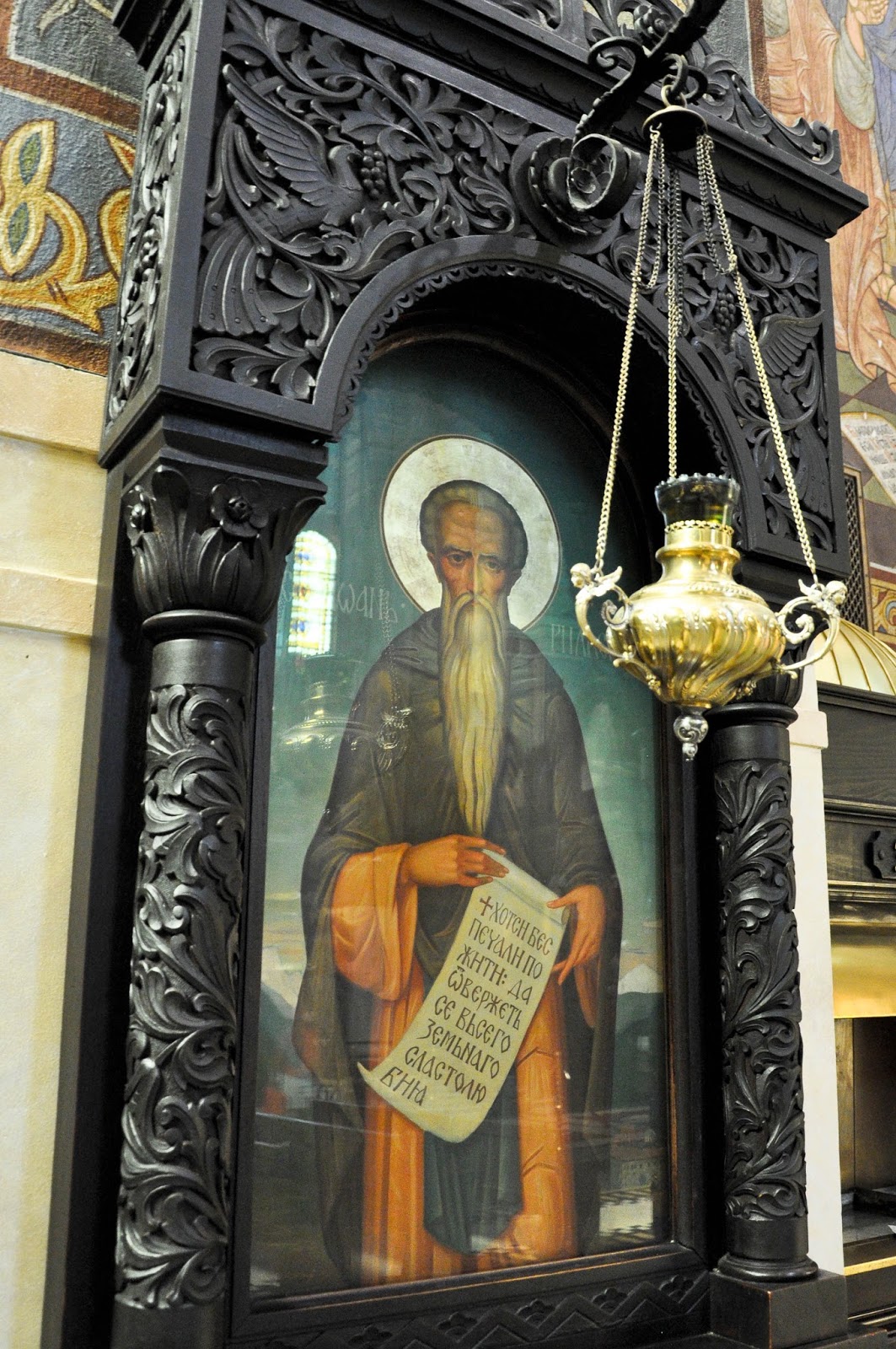 Just then, a voice went up:

‘The Cathedral is closed. Please, leave.’

It was six o’clock.

A man sitting on one of the benches didn’t get up quickly enough.

‘Halloooo!’ – reverberated the voice of another of the old harpies. ‘It’s closed.’ 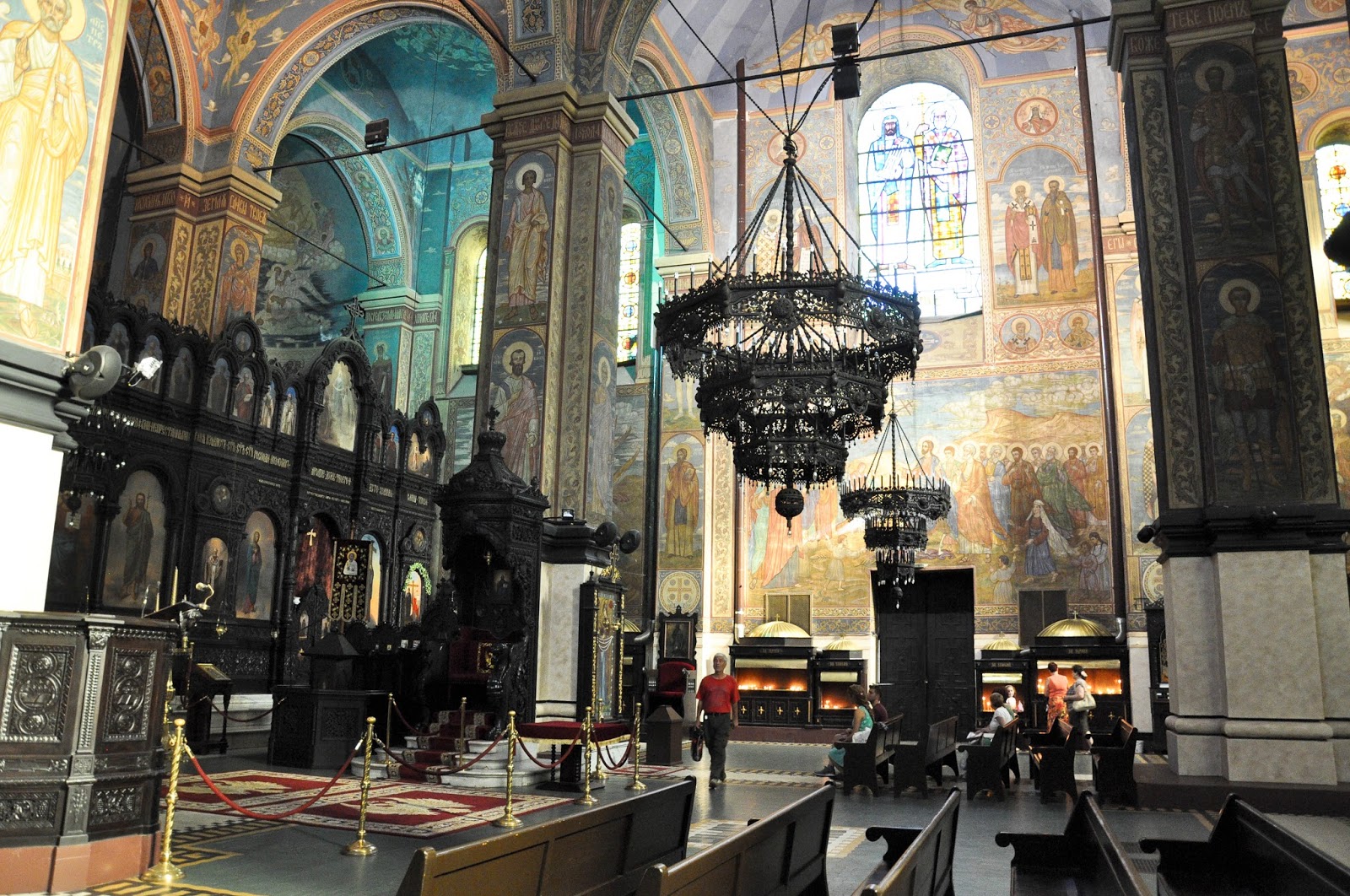 My line of communication with God went off.

The extinguished candles were placed in a bucket full with half burned candles that had been thrown in it all through the day. 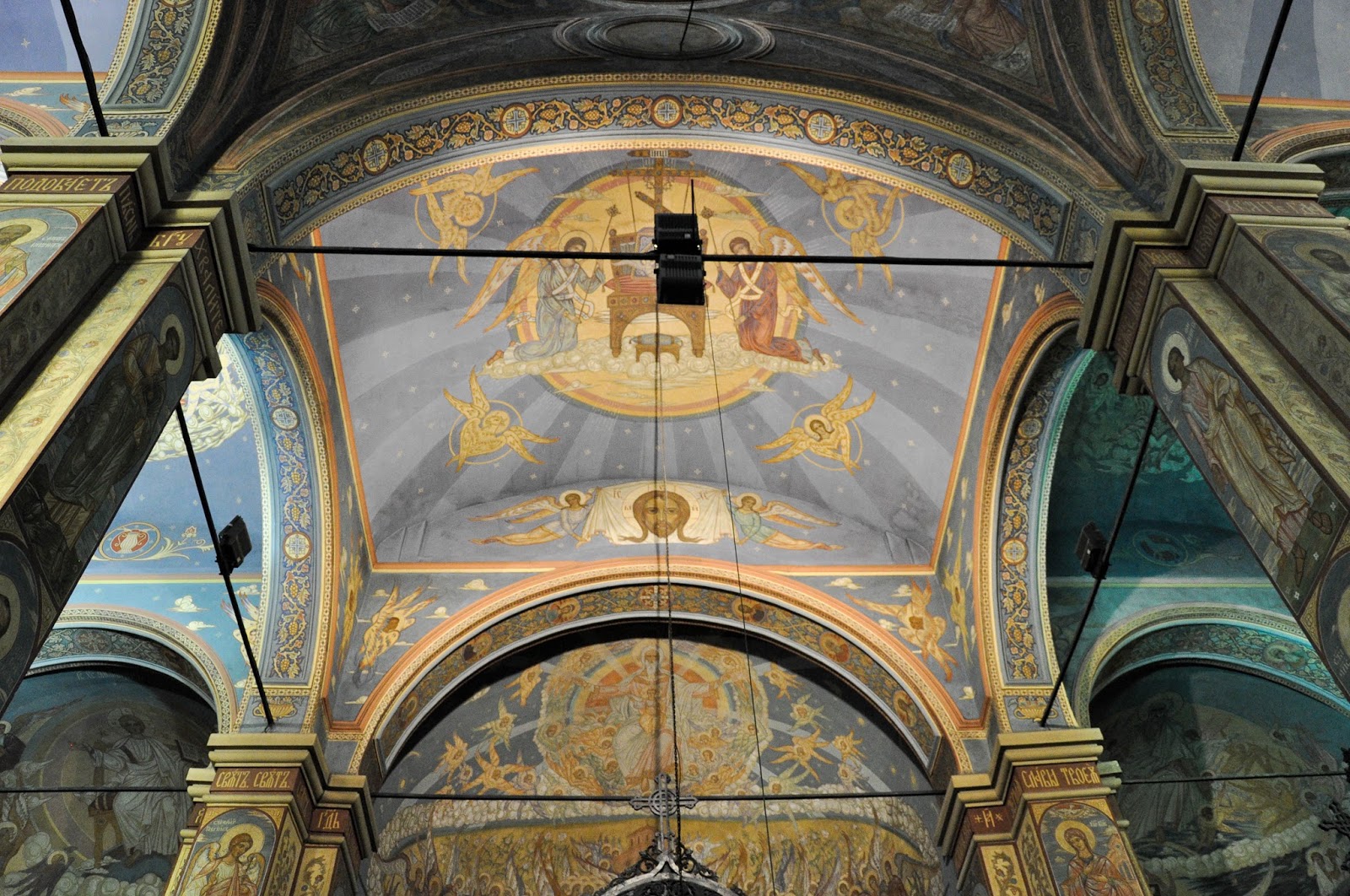 P.S. Don’t let this last portion of my story to put you off visiting the Cathedral when you are in Varna. It is a splendid building with rich history and symbology. It deserves to be seen. It is dear to my heart. I hope that one day the candles will be left to burn all the way through. 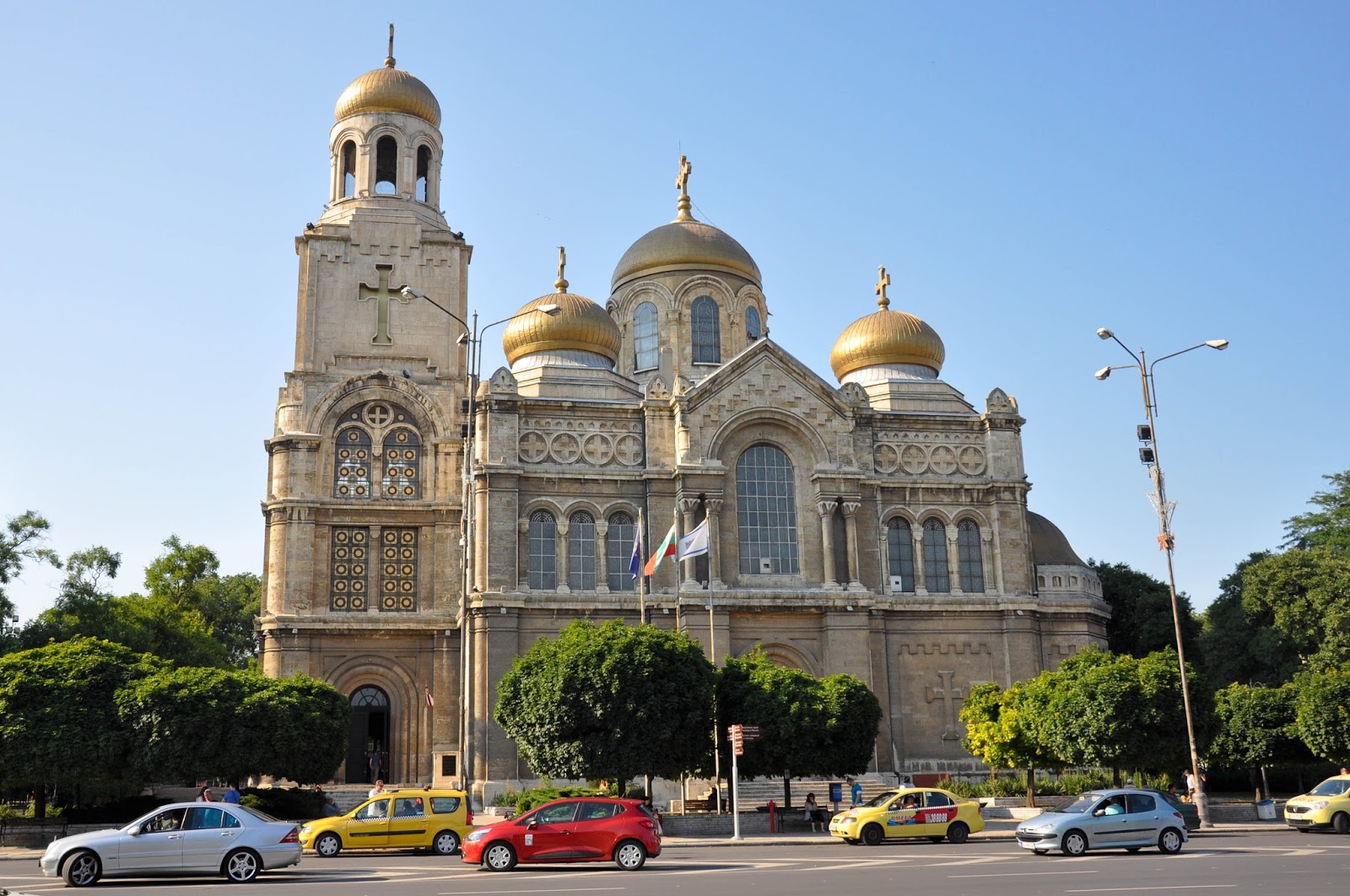