Skip to Content
Thank you for stopping by! This blog post reflects my first-hand experience. It may contain affiliate links and if you click and make a purchase through them, I may receive a small commission at no cost to you. The ads on this page help me keep this blog free and produce new travel content for you to enjoy. Full details in my Disclosure.
20 shares

What do you do when you need to go across the Grand Canal in Venice and you are miles away from the nearest bridge? Why, you take the traghetto, of course.

These long black boats have been ferrying passengers across the Grand Canal for centuries. In a way, they are a living testament to how people have adapted to life on the water. 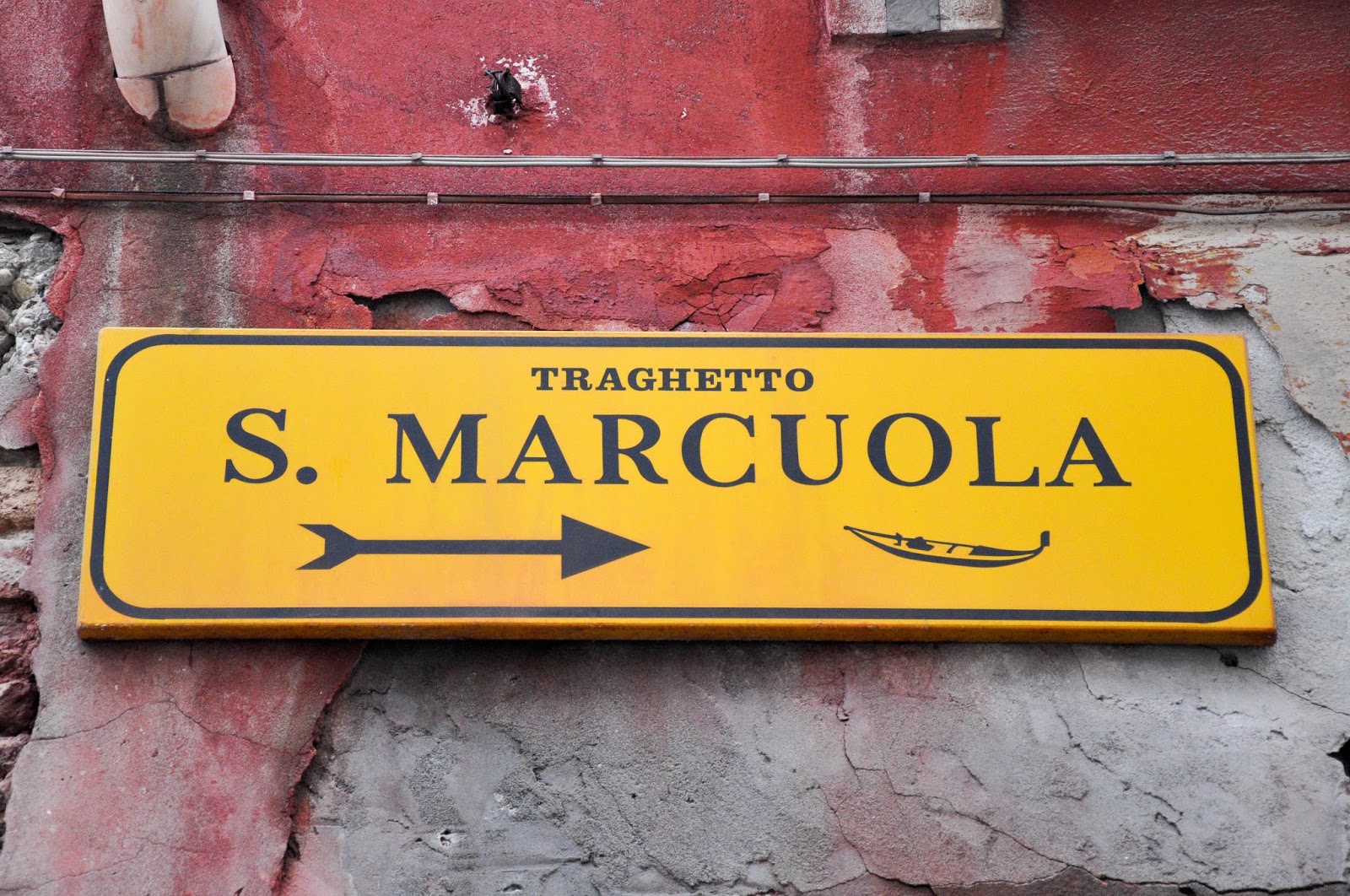 At a first glance, the traghetto looks just like a big gondola. As soon as it aligns with the real thing though, the differences are only too easy to spot. For example:

The most important difference between the two is their purpose. 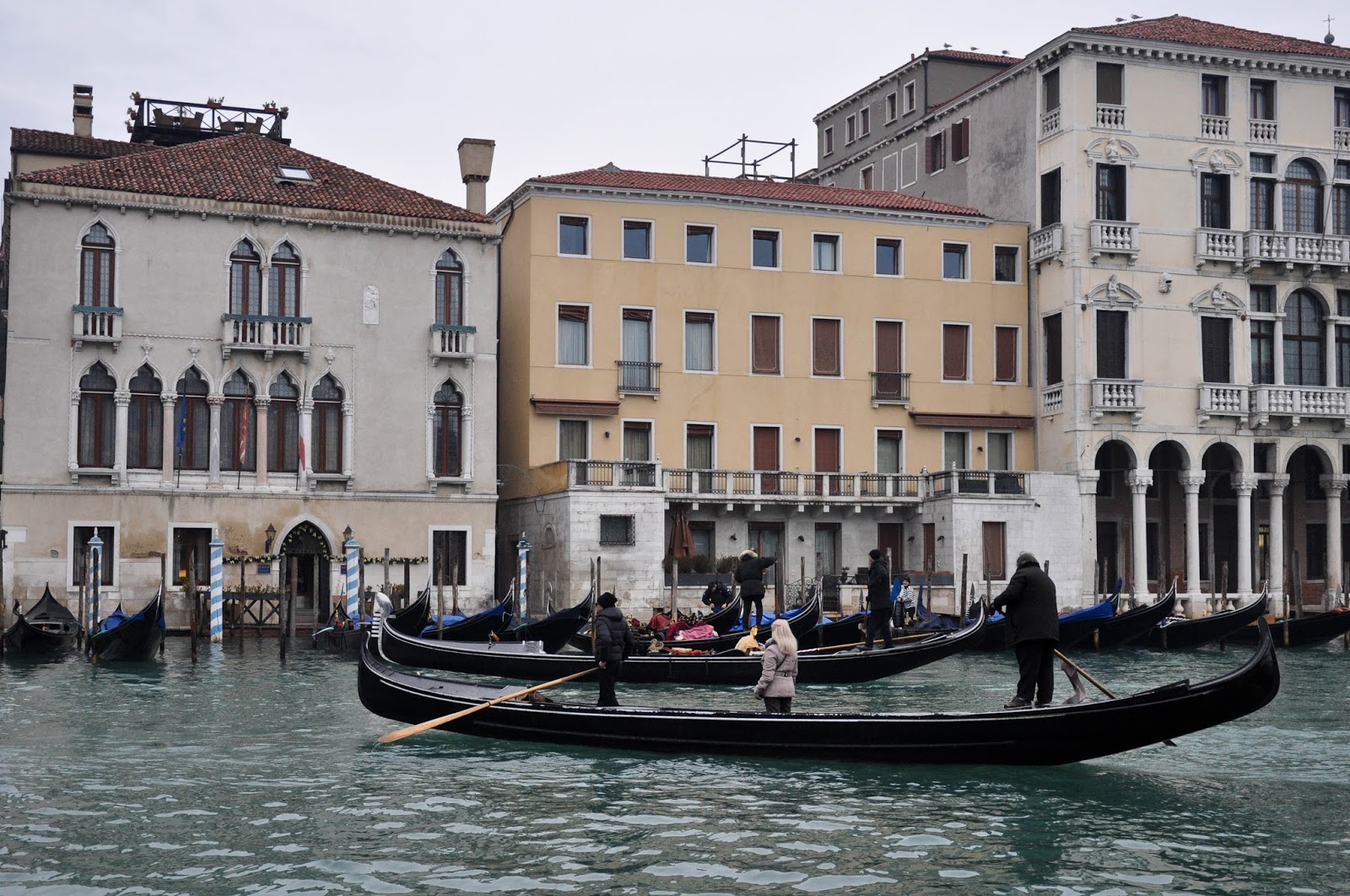 While the gondola conjures images of a leisurely romantic ride along the interwoven canals of Venice in the company of a beloved one or a group of friends, the ride on the traghetto lasts only a few minutes and its sole goal is to help you cross the Grand Canal.
While a gondolier can sing you love songs to help create the perfect memory of your stay in Venice, the two oarsmen of the traghetto concentrate on their work, rowing the heavy boat across, what it seems to be, one of the busiest city water thoroughfares in the world. 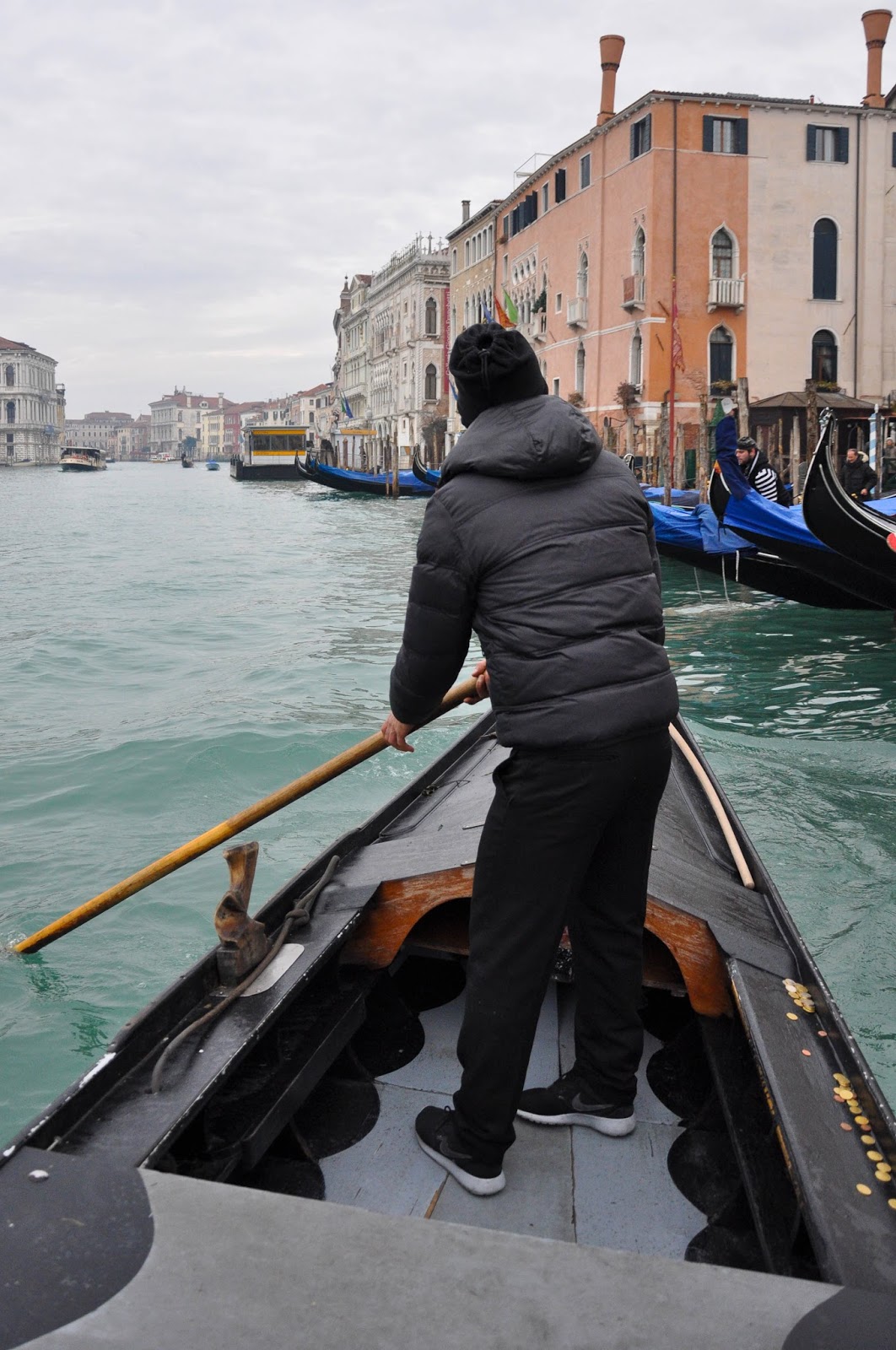 Spanning a length of four kilometres, the Grand Canal in Venice is crossed over only by four permanent bridges. As a completely pedestrian city, just imagine how much longer people would have had to walk every day, if they had to rely only on these four bridges to get across town.
Here comes the ferry or ‘traghetto’ in Italian – a convenient shortcut in a city which, in my mind at least, is synonymous with ‘labyrinth’. A maze of streets criss-crossed by a maze of canals is made much more navigable by the traghetto. You hop on board at one of seven spots along the Grand Canal and within five minutes you are on the other side having saved yourself the effort of walking all the way up to Rialto bridge or down to the wooden bridge in front of Gallerie dell’Accademia.
All for the humble price of two euros or seventy eurocents if you happen to be a resident of Venice. At the same time and apart from getting you across, the traghetto gives you a chance to appreciate Venice from the viewpoint of a gondola, especially if you can’t afford to pay the set fee of 80 euros to ride one for 40 minutes. 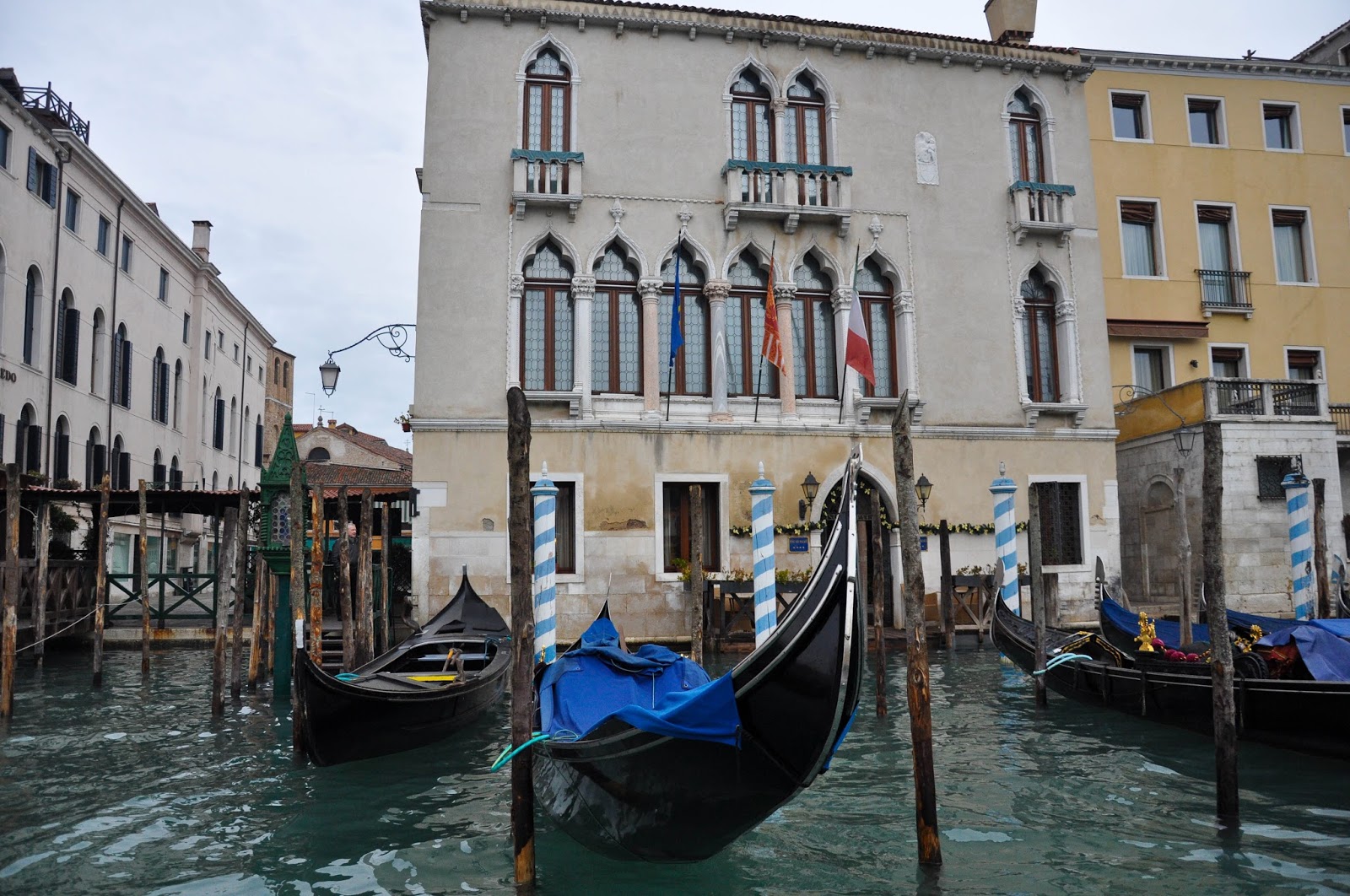 I have to say that until very recently, I had never ridden the traghetto. Even more, I was unaware of its purpose until a few months ago. Yes, I had seen the street signs and the clearly marked traghetto stations all along the Grand Canal, but, somehow, I had always assumed that the traghetti were just like gondolas, so I never stopped to investigate further.
This all changed last December when I spent a day exploring Venice with my little daughter. I carried her, her buggy, the changing bag and my camera bag across one bridge too many and I was starting to get worried how I was going to cope once we had to go over Rialto bridge.
I knew that its steps are not too steep and usually at least one or two people would stop and offer to help, but I was dreading the crowds and having to push through the forest of selfie-sticks of the tourists eager to snap themselves on the Grand Canal.
We stopped at Rialto fish market for a portion of delicious seafood in spicy Sicilian tomato sauce, when right behind the vast market building, I spotted the Santa Sofia traghetto station. 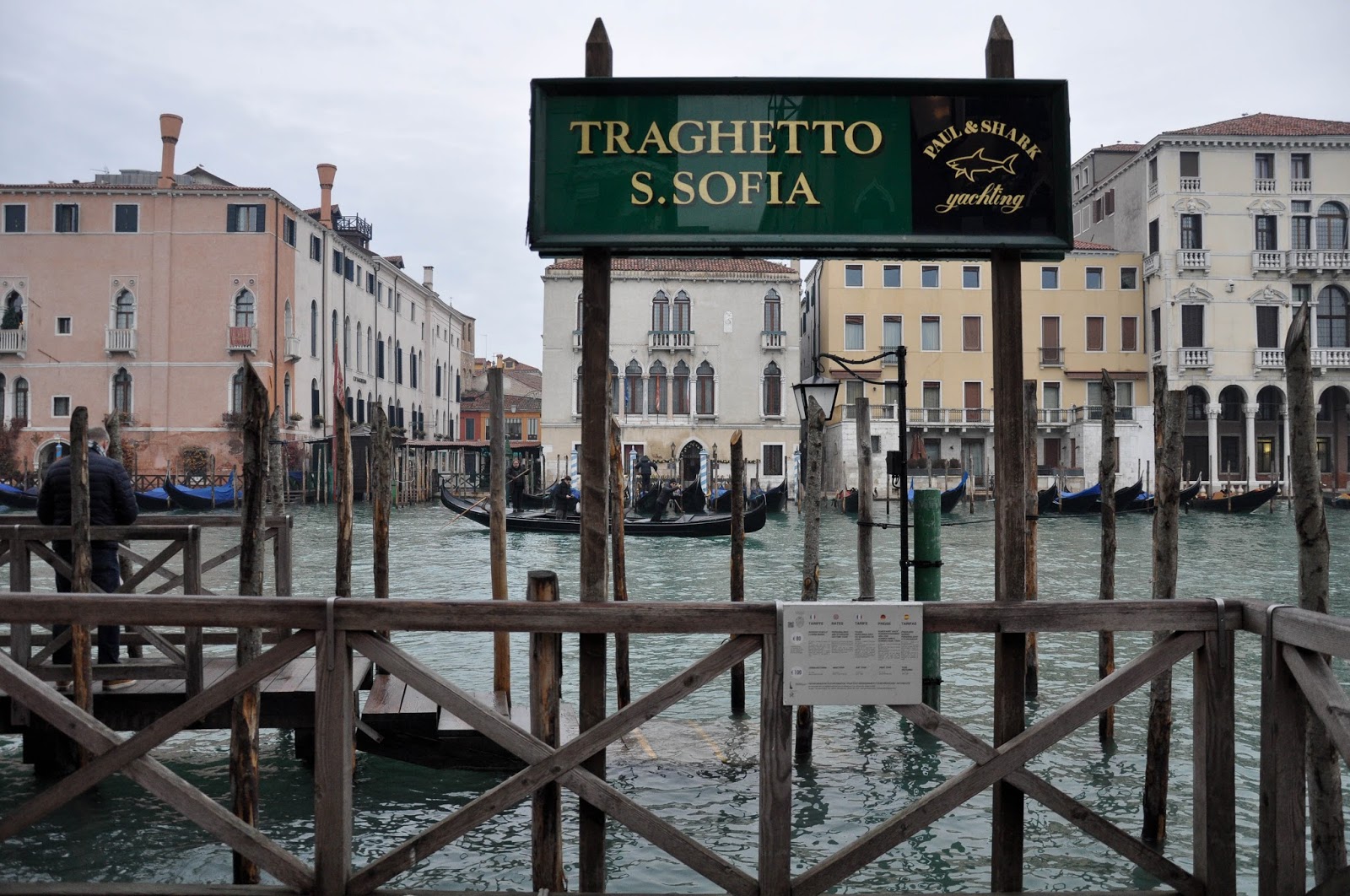 We walked up to it and a little sign attached to the railings caught my eye. It indicated the price of two euros for crossing the Grand Canal on a traghetto and just then the big black boat arrived and people disembarked and went off on their way. 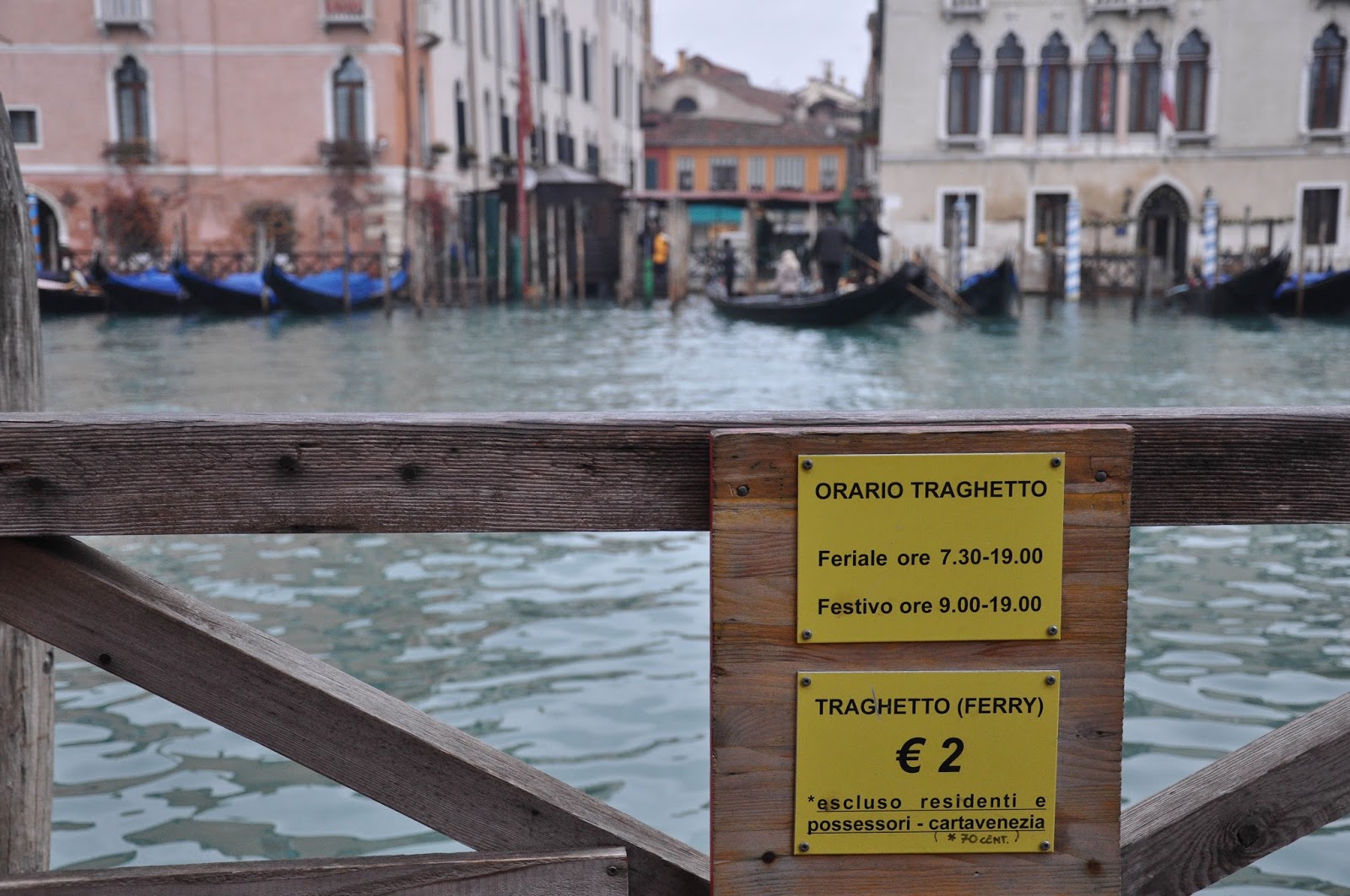 Spontaneously, I decided to give it a try.
The oarsman at the bow put my bags and folded buggy on the bottom of the boat and then helped me and my little daughter get on. And just then we committed the ultimate cultural faux-pas, as we sat on the wooden planks, instead of standing upright. Still, it was obvious that we were brand new to this traghetto business, so no-one said a word and off we went across the Grand Canal saving me the effort to scale up and then down the mighty Rialto bridge.
I was converted! 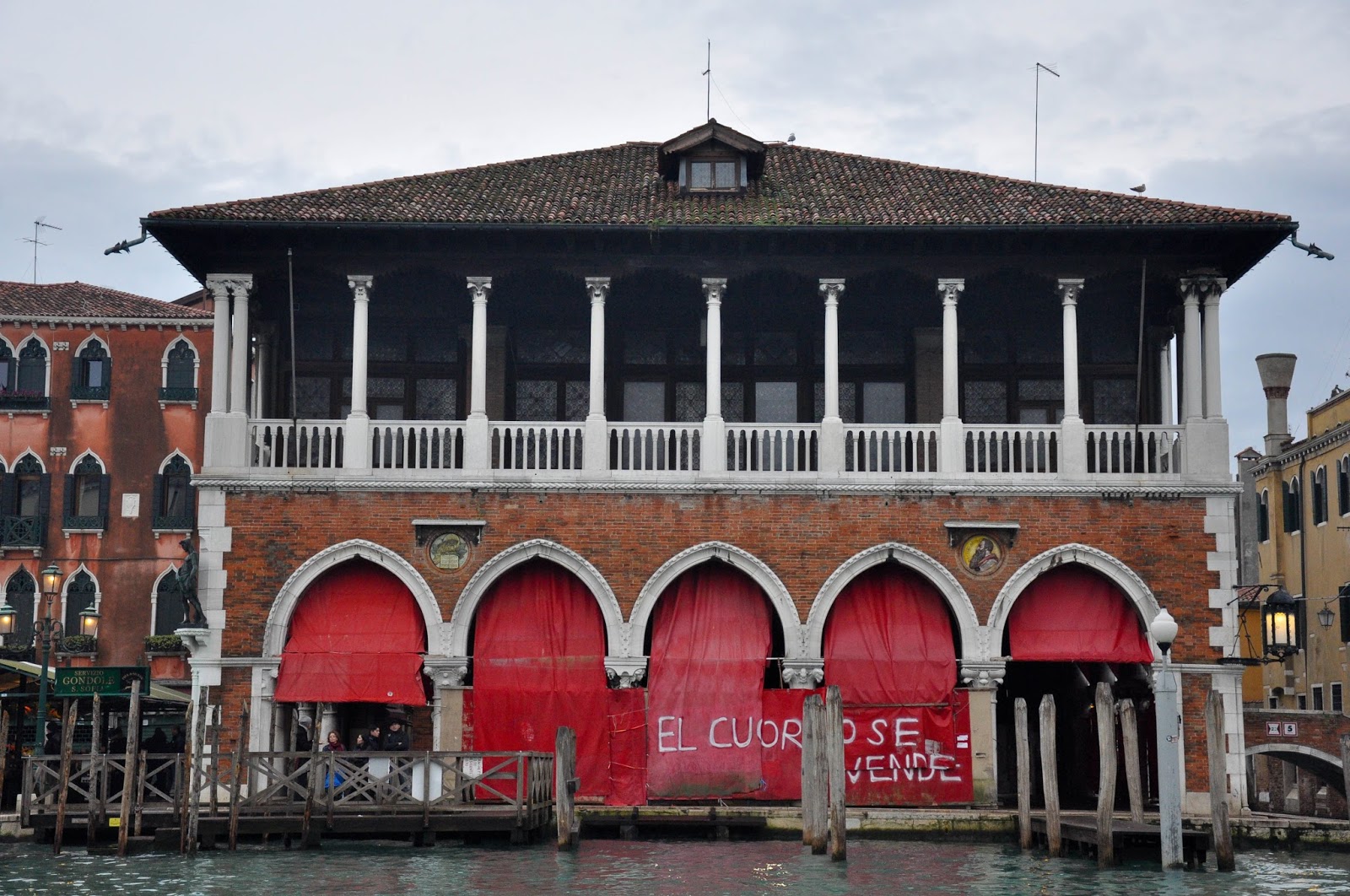 So, when a few days ago I returned to Venice to see its annual Befana race (read all about it here), I knew I wanted to go on a traghetto again. It was still early morning as I walked from the train station down the wide street which leads all the way to Rialto and Saint Mark’s Square.
My eyes were searching for the street signs pointing to one of the seven traghetto routes which are still in operation (down from thirty several years ago). They were easy to spot stuck against the facades of Venice’s buildings which are relentlessly peeled down by cruel moisture all year round. 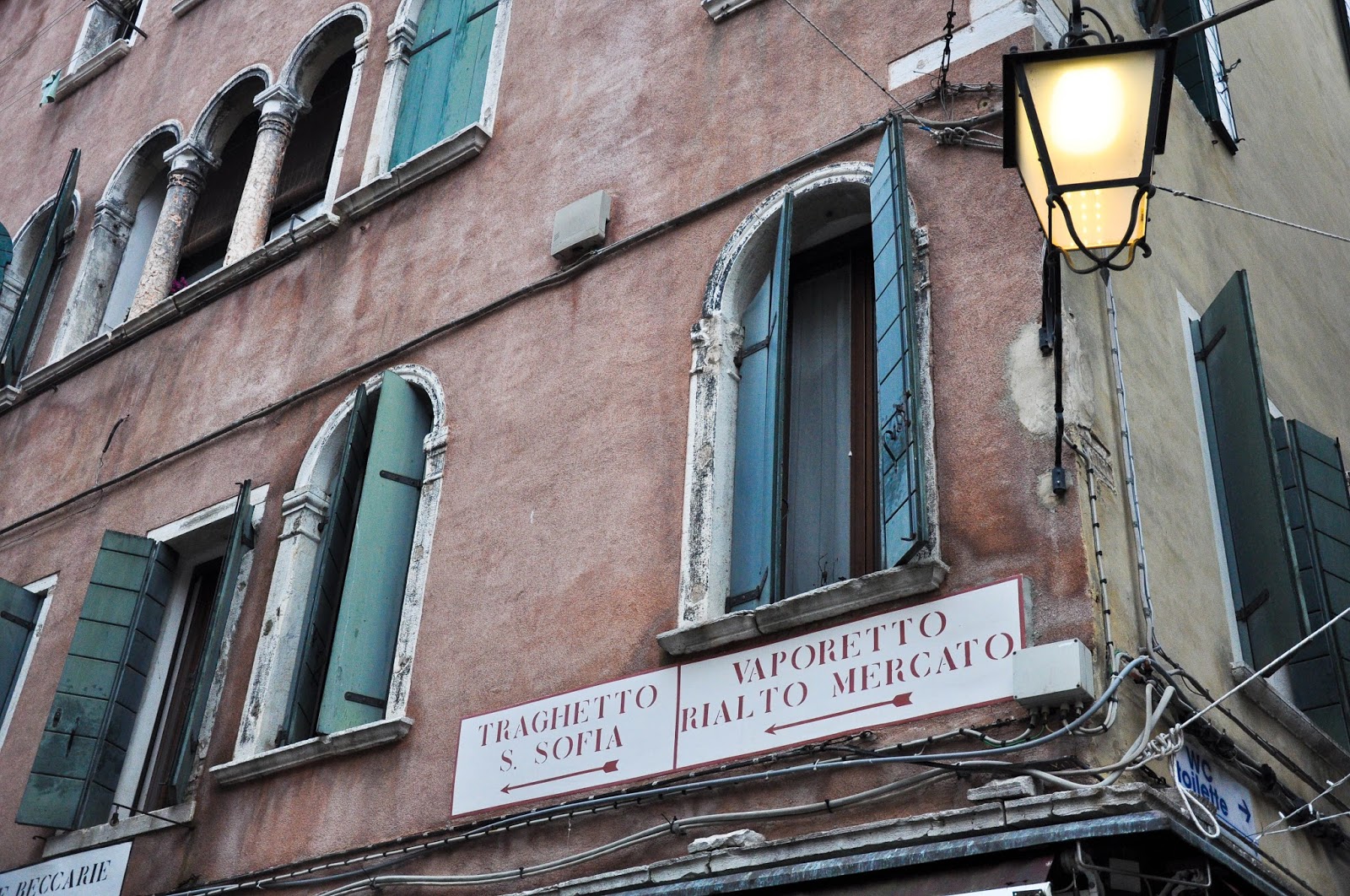 Before long I found myself back at Santa Sofia traghetto station – this time on the opposite side of the Grand Canal. Two gentlemen were already queuing on the small quay. A gaggle of gondoliers were hard at work cleaning and polishing their gondolas, getting them ready for the day ahead. 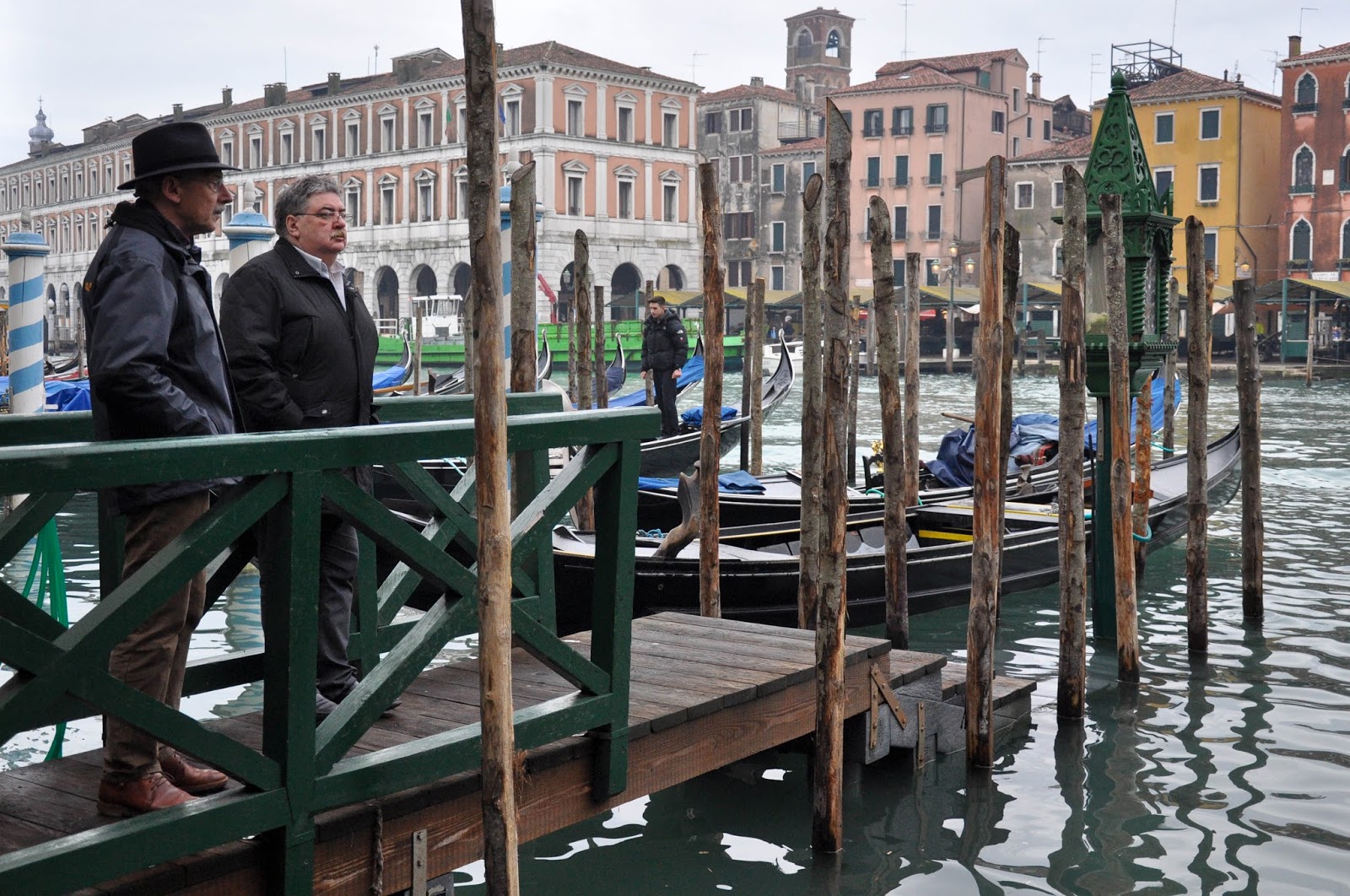 I could see the long black traghetto making its way across the canal to where we were waiting. People were standing upright and faced forward. They all seemed like seasoned traghetto riders, skillfully keeping their balance as the two oarsmen – one on the stern and the other on the bow – expertly moved the boat forward.
A few minutes later and the traghetto docked at the small quay. The young oarsman at the front extended his arm helping the passengers steady their step as they disembarked. Then it was our turn to get on the boat.
Just then another man joined our small queue. Dressed in black, he spoke in a friendly manner with the young oarsman as the latter started to maneuvre the traghetto off the quay. Then, instead of going straight across the Grand Canal, our boat took a left turn and followed the long line of gondolas which had been moored there overnight. 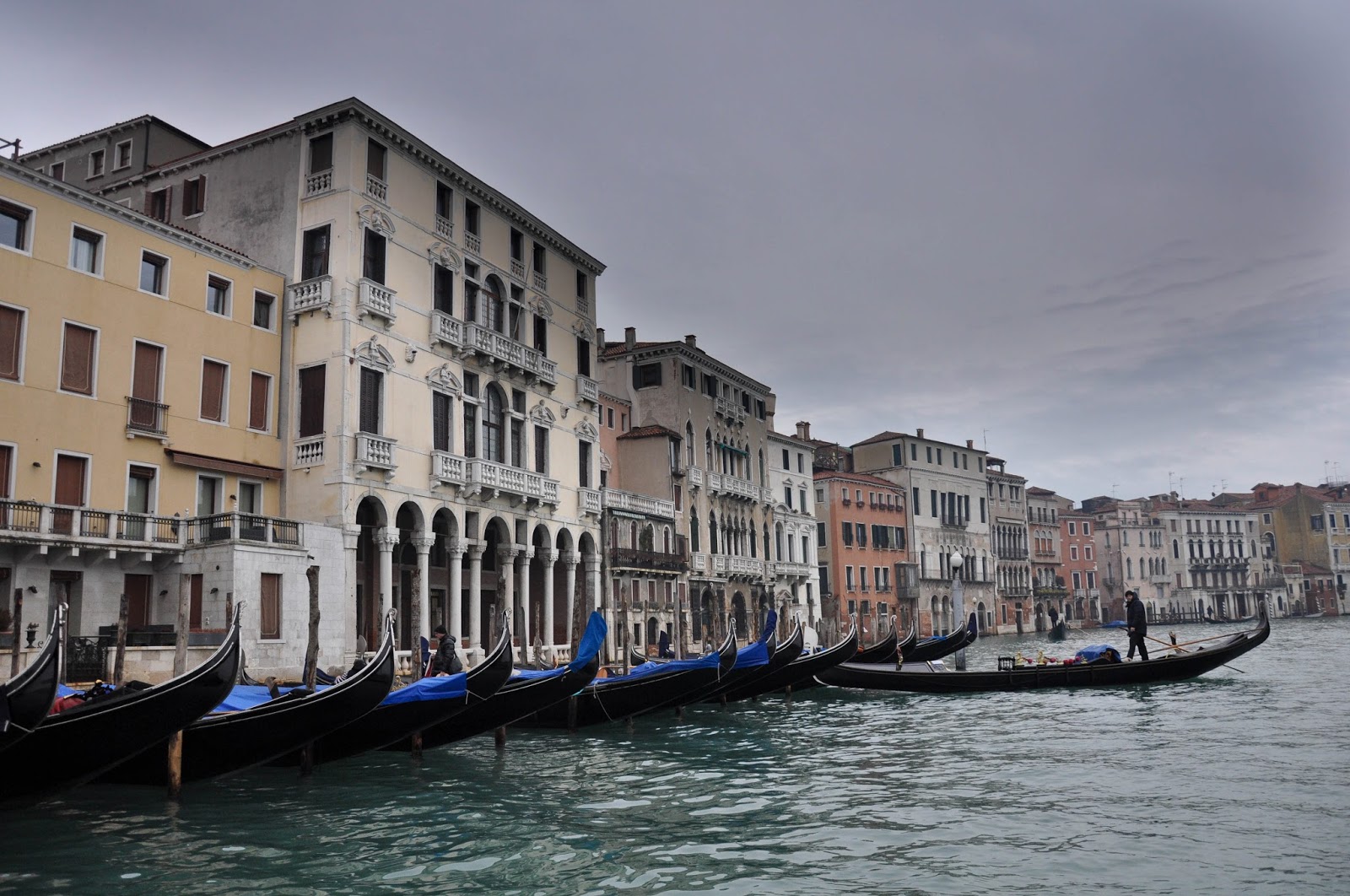 As we got really close to one of them, the man in black waved good-bye to our oarsman and deftly jumped from the traghetto onto the gondola. 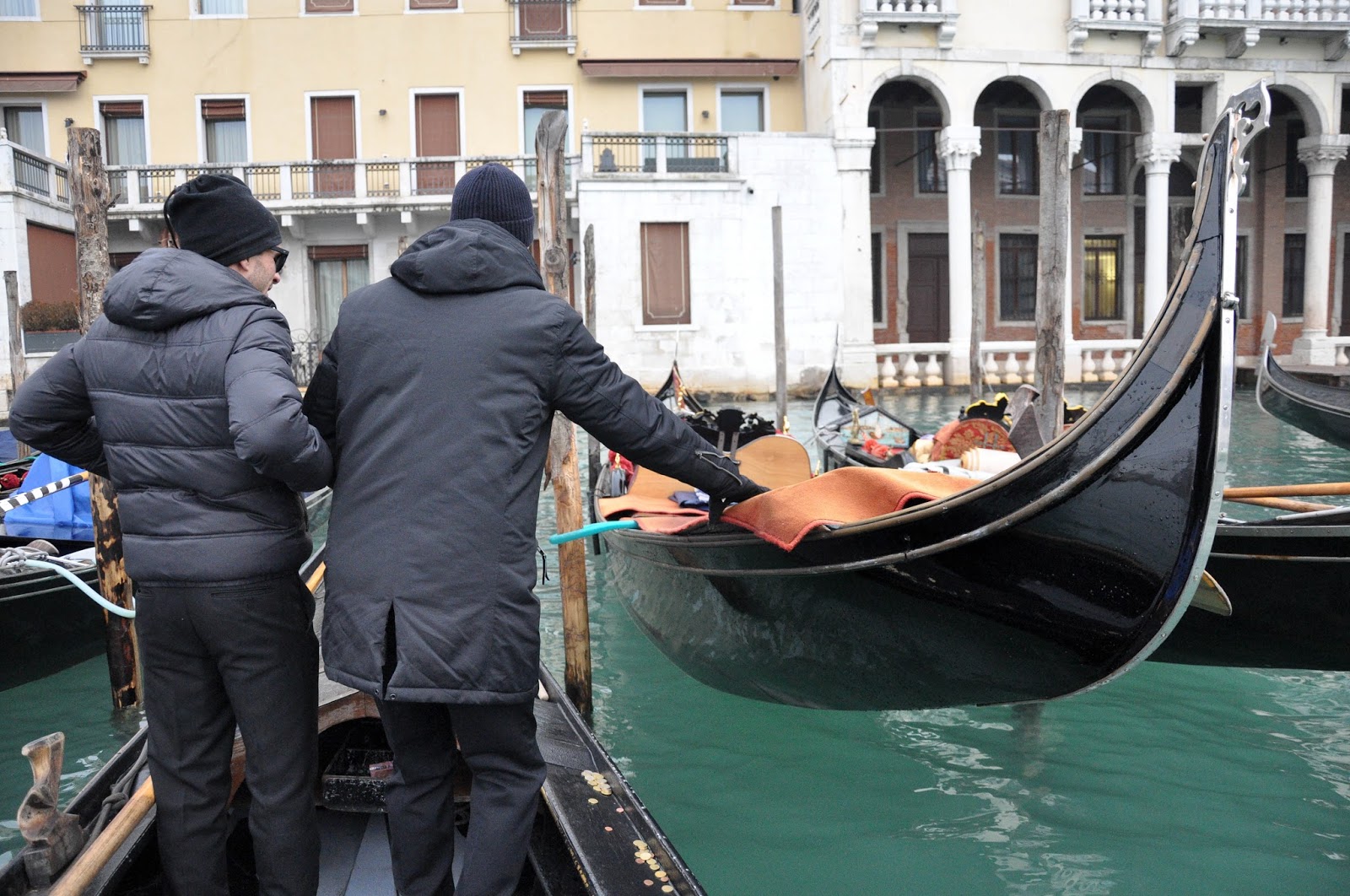 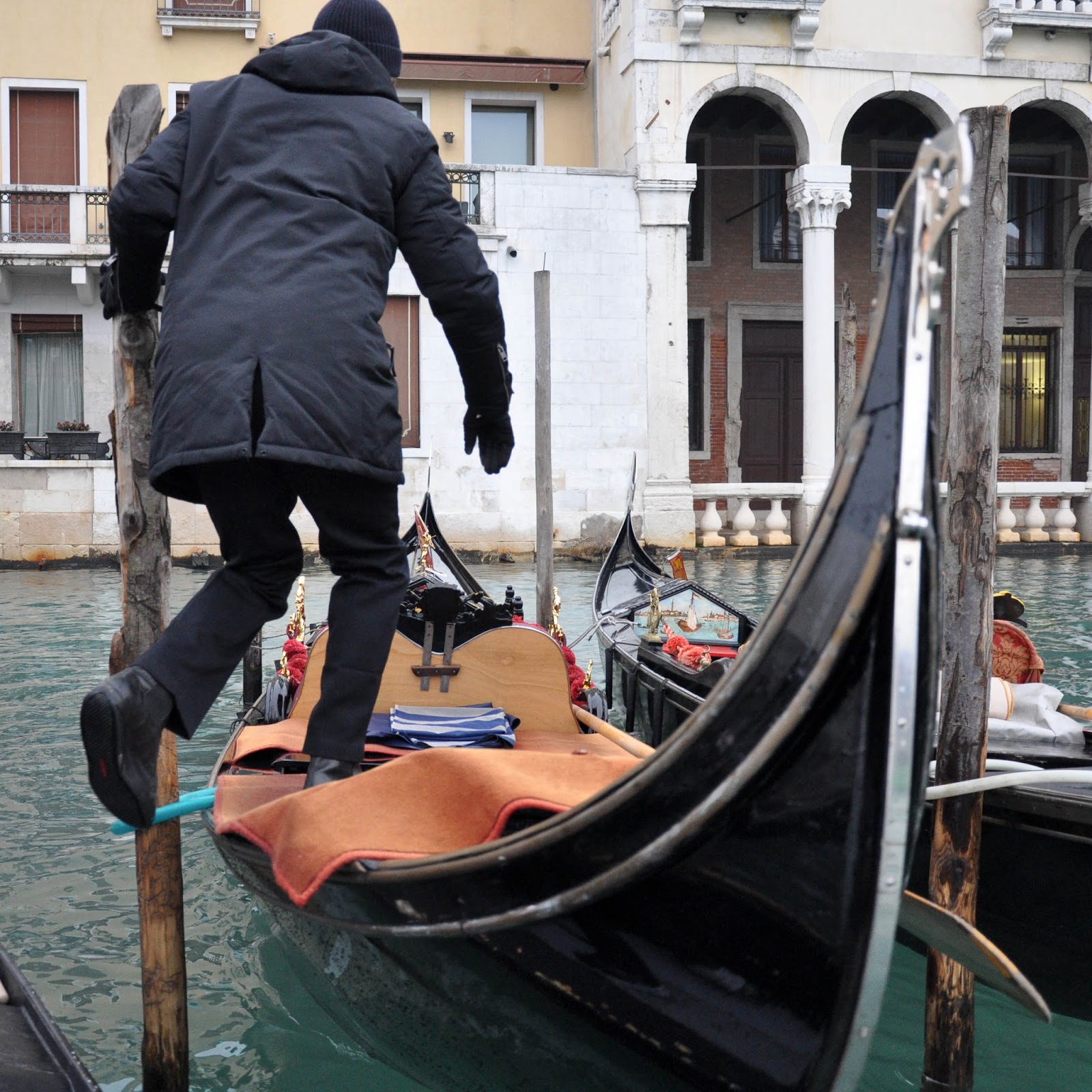 ‘So, this is how gondoliers get to their work place in the morning!’, I thought. 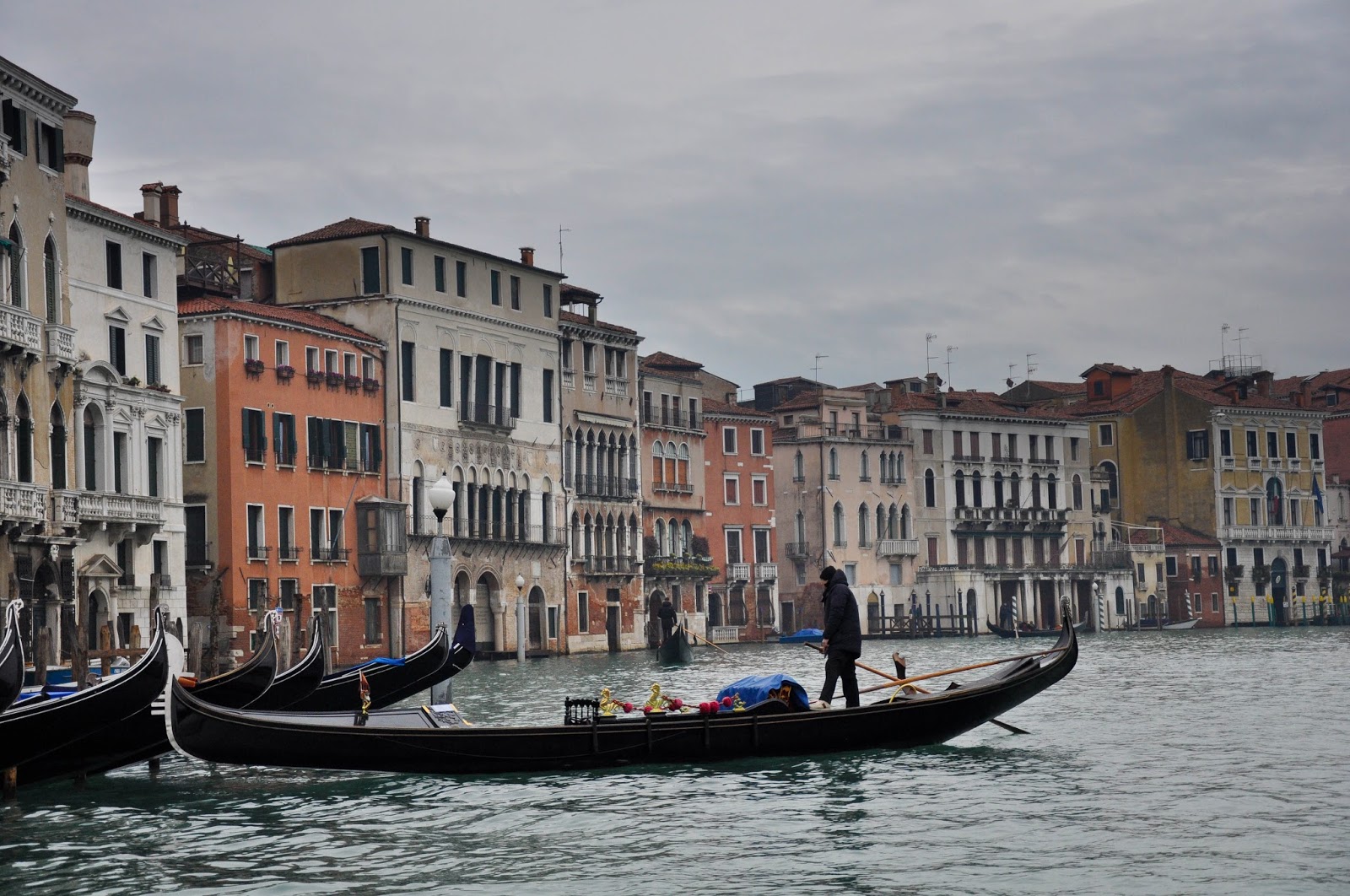 After that our traghetto turned perpendicularly to the Grand Canal and within a few minutes we were on the other side.
All through the crossing, I had stood upright. The traghetto was fairly stable and as long as you took a broad stance you could go along with the flow of the boat being propelled forward by the two oarsmen.
I used my time to take a few pictures, noticing little details about the traghetto and its crew. They worked like a well oiled machine, moving the heavy boat forward and deftly avoiding the many water crafts navigating the canal.
A simple cash box was placed under the bow. 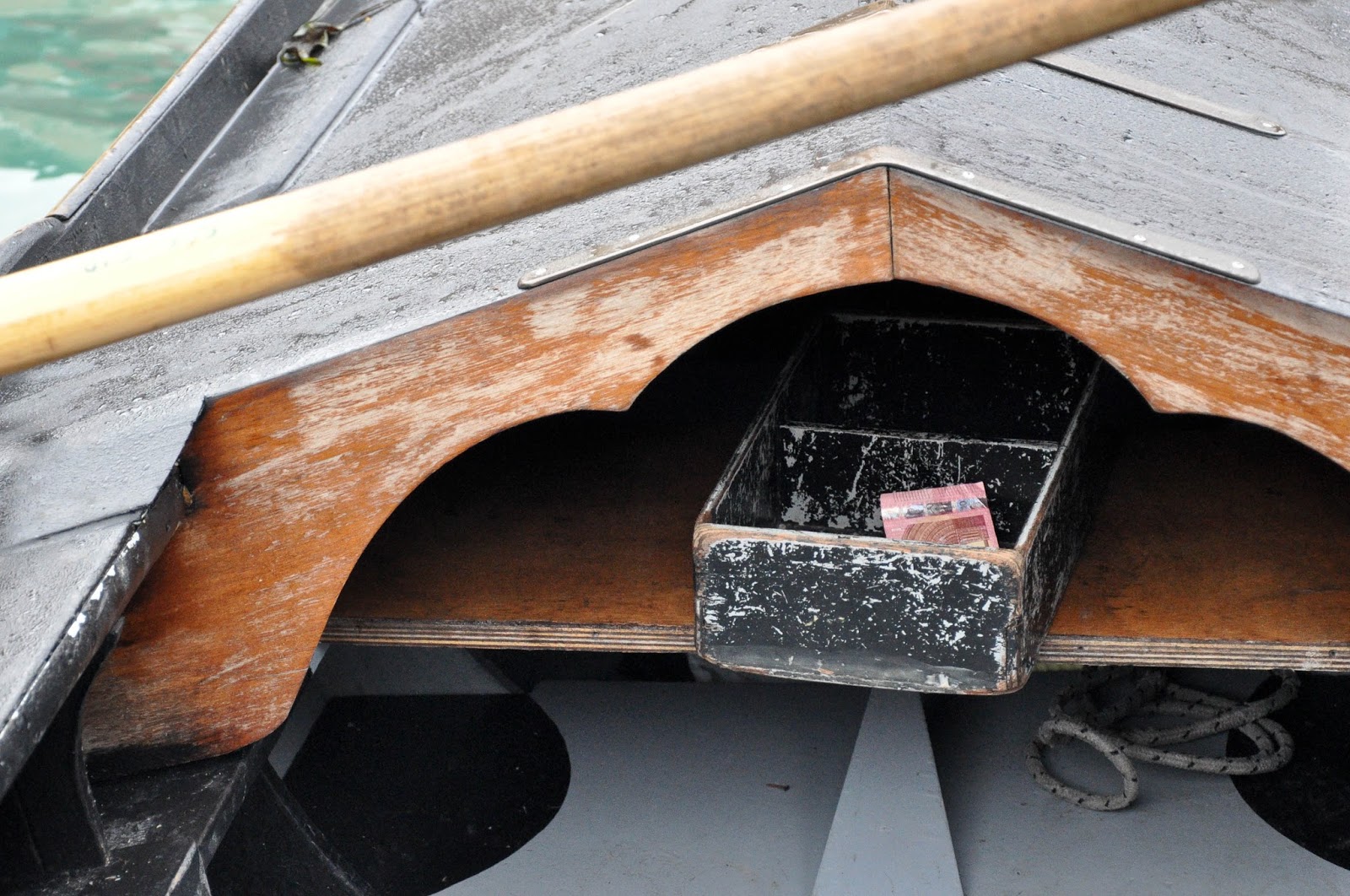 As the traghetto docked, the young oarsman helped us all to safely disembark. I said politely ‘Grazie!’ and went on my way.
Next time that you are in Venice, take a traghetto or two across the Grand Canal. It is an authentic Venetian experience and a great way to see Venice from a different point of view. 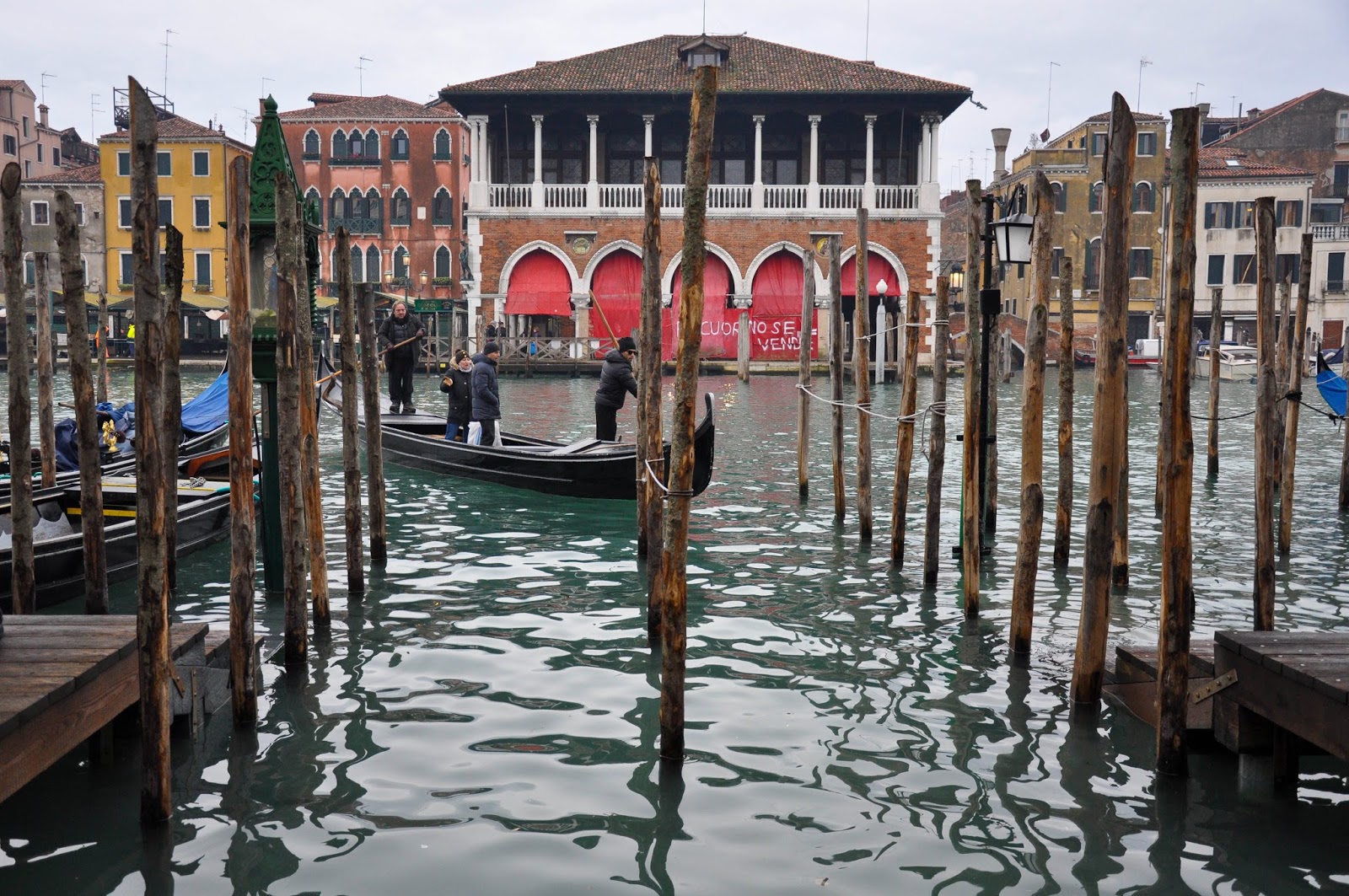 That sounds amazing, I have always wanted to take one, but though it sounded like it might be a fuzz, but I am not confident enough to try and search one out. It reminds me on using the Abra in Dubai creek (which costs 1 dirham, about 25¢) and is a motorised boat that just crosses the Dubai Creek for mainly workers to use.

It's a great experience, although since I first wrote this blog post back in 2015, catching a ride on a traghetto has become more and more popular with tourists. The last few times that I used the traghetto in Venice, we were specifically told to sit down instead of standing up as it is the traditional Venetian way. In any case, it has to be experienced at least once when in Venice. There are permanent stations along the Grand Canal - I think, there are four left, - so do give it a try as and when you can. Best wishes,