Skip to Content
Thank you for stopping by! This blog post reflects my first-hand experience. It may contain affiliate links and if you click and make a purchase through them, I may receive a small commission at no cost to you. The ads on this page help me keep this blog free and produce new travel content for you to enjoy. Full details in my Disclosure.
189 shares

My favourite fruit and the one thing I really missed during my 14 years in the UK. 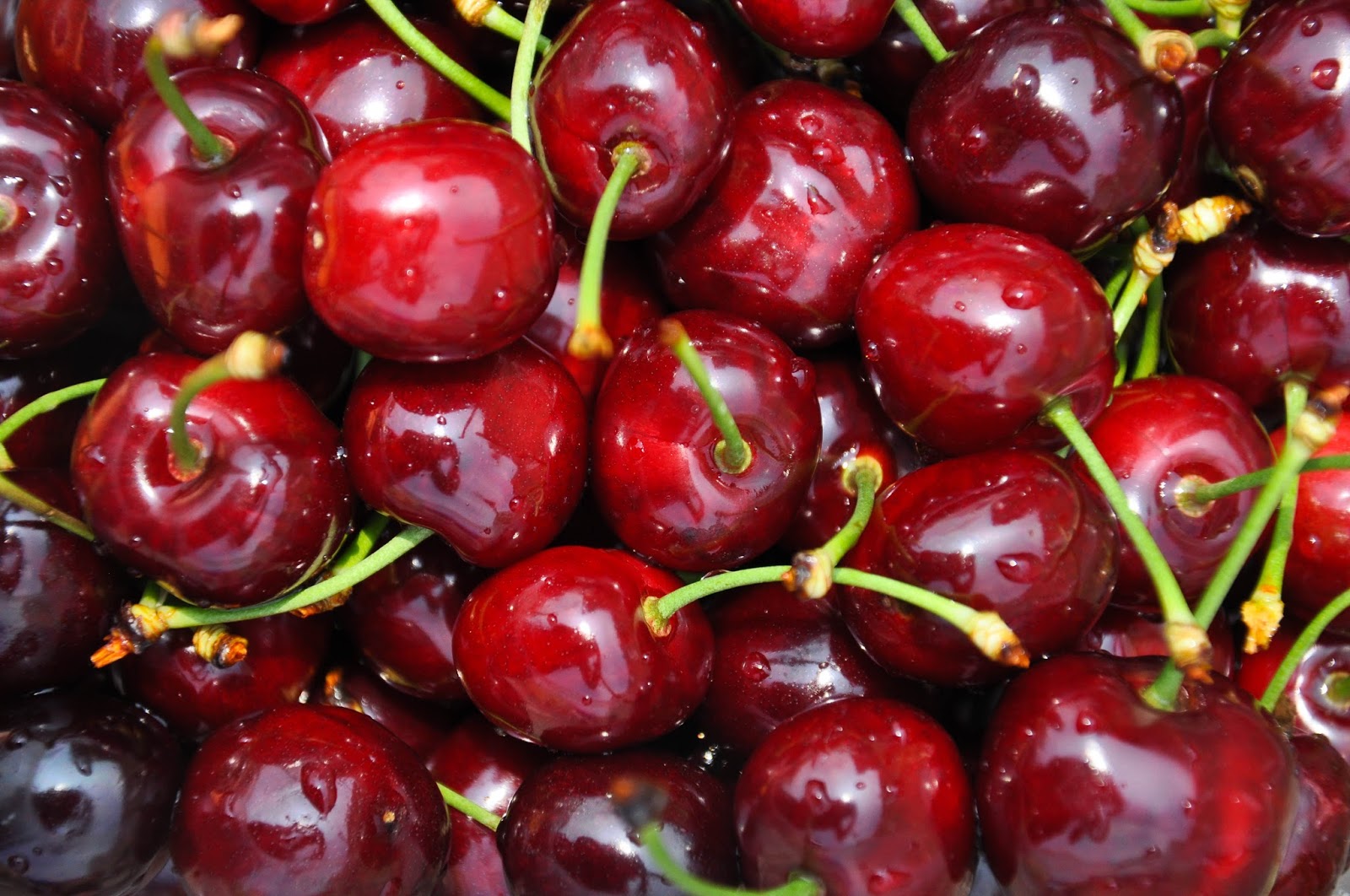 It is not like there were no cherries there, but they were sold in tiny boxes at extortionate prices in the local supermarkets, more like a luxury rather than the staple they were in my Bulgarian childhood.

Ah, the joy of climbing all the way to the top of a cherry tree covered in ripened juicy fruit to happily munch on cherries for an hour or two. My parents’ garden just outside Varna in Bulgaria had three mature cherry trees at the time – one with white cherries which would become almost transparent with succulent juice the longer they spent on the tree. The other two bore cherries which would transition through all the shades of red – from a bright intense one to an almost black burgundy – the more they spent in the sun. 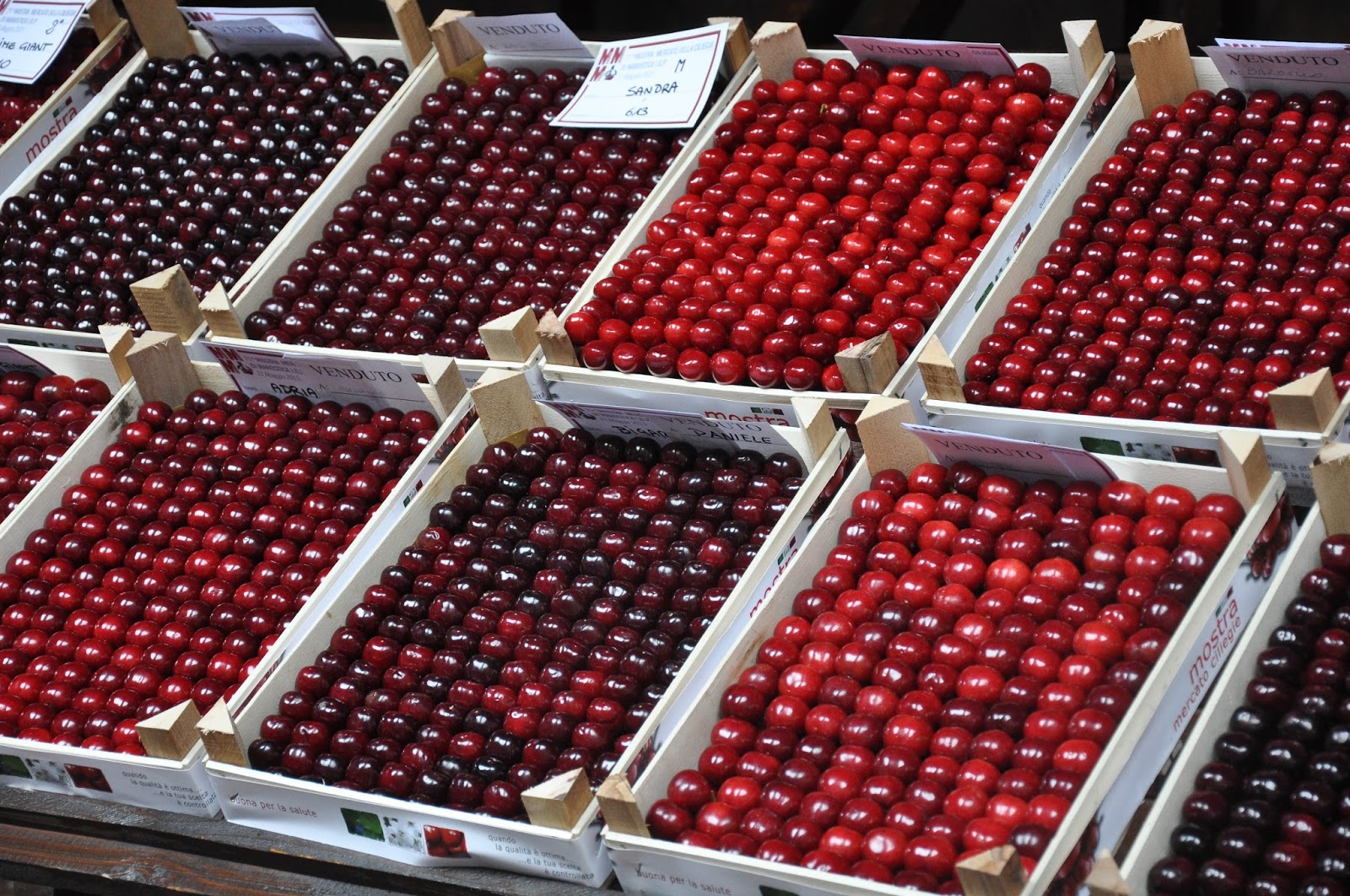 Now that we live in Italy, I was excited to a state of almost breathlessness to experience once again the juicy season of cherries.

As luck would have it, Veneto – the Northern region which we currently call home – is not only a cherry-growing area, but it also encompasses the only place in Italy to obtain the Protected Geographical Indication (PGI) mark specifically for cherries.

Marostica is a charming medieval walled town surrounded by cherry orchards. The oldest documents making reference to cherry farming there date back to the beginning of the 15th century. It is a wonderful place where nature and tradition unite to produce one of the sweetest and largest cherries I have ever tried. 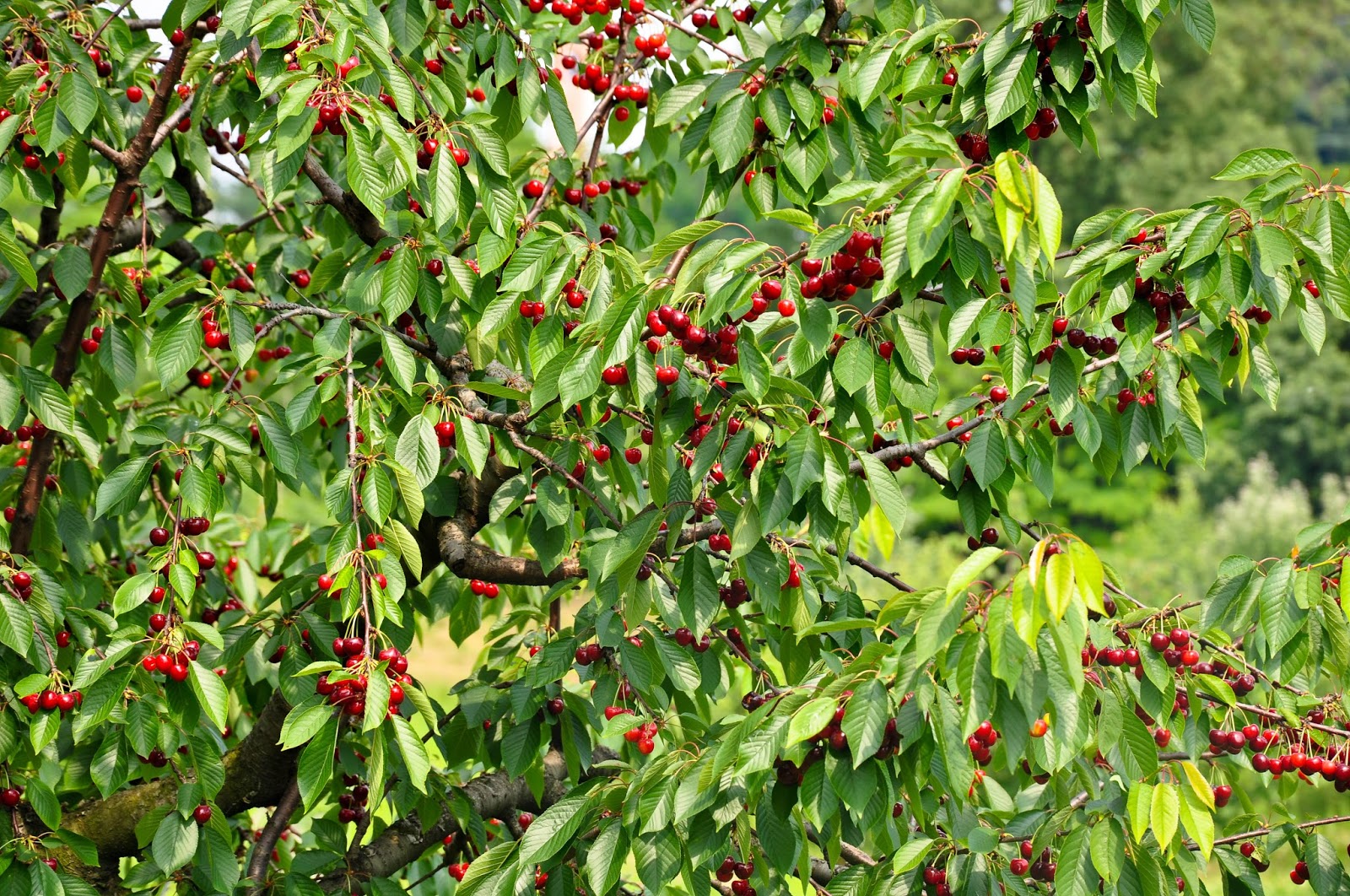 Every year, at the peak of the cherry season, a two-week long market show is held in Marostica to celebrate this famous local produce. Farmers from the area congregate on the town square to sell their juicy wares in bonny marquees. People meander from stall to stall, taking their pick of sweet red fruit.

The large defensive wall of Marostica serves as a dramatic backdrop to this jolly event. 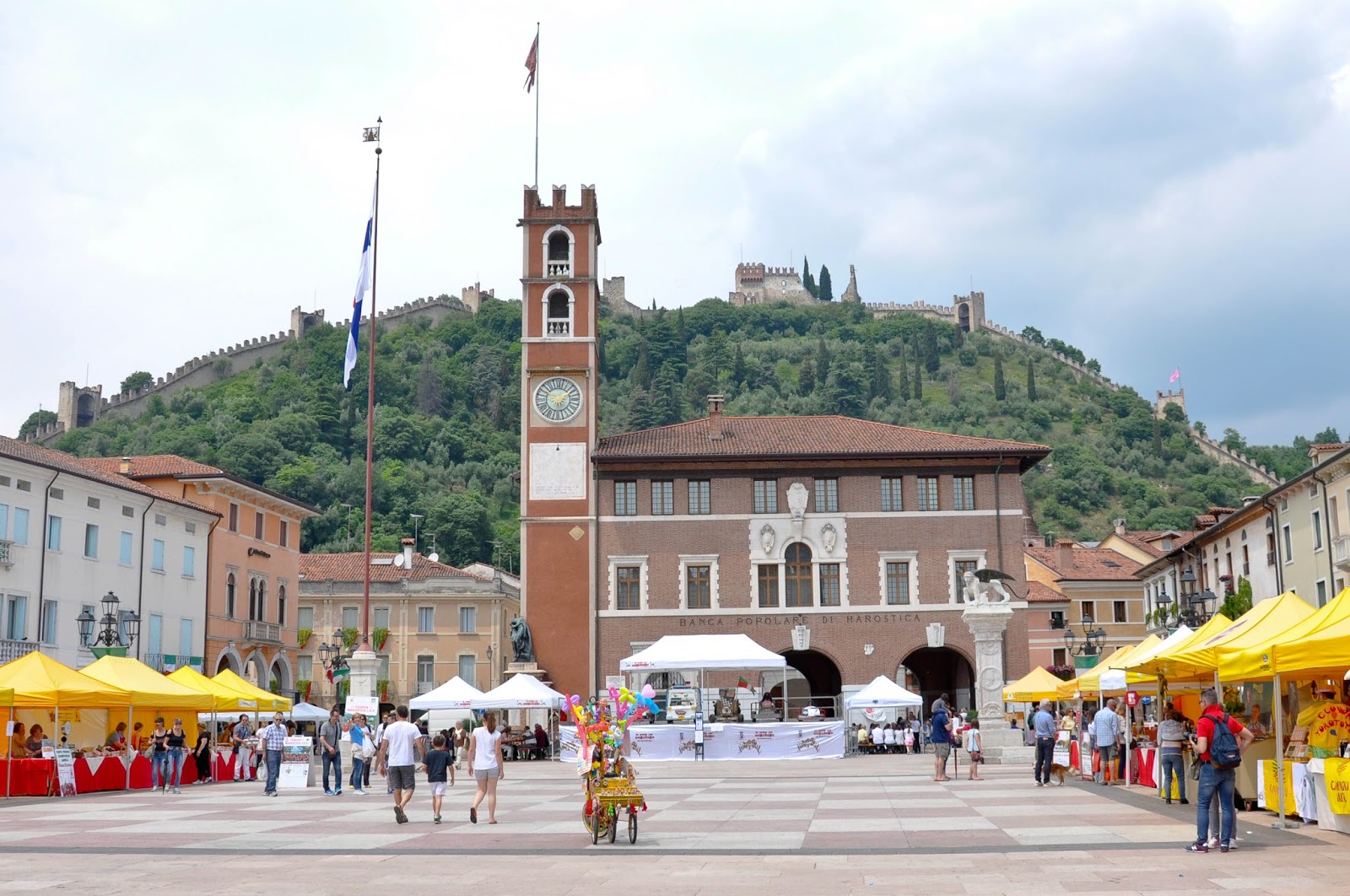 Obviously, I couldn’t wait for us to go there and eat cherries to our hearts’ content.

So, this past Sunday, we piled in our little red car and made the short journey from Vicenza to Marostica for the opening weekend of the event. We arrived in the early afternoon, right after the start of the traditional Italian lunch break when everyone retreats home to take a nap or simply to hide away during the hottest part of the day.

I was afraid that we had made a rookie mistake, but it worked out quite well. The square was almost devoid of people and there was a lovely breeze from the nearby hills keeping us happy and fresh in the otherwise hot and bright day. Later on, it got really busy with people flocking to the stalls, so it was good we had a bit of uncrowded time.

It gave us a chance to chat to some of the farmers and learn more about their cherries and the tradition of cherry-growing in the area. 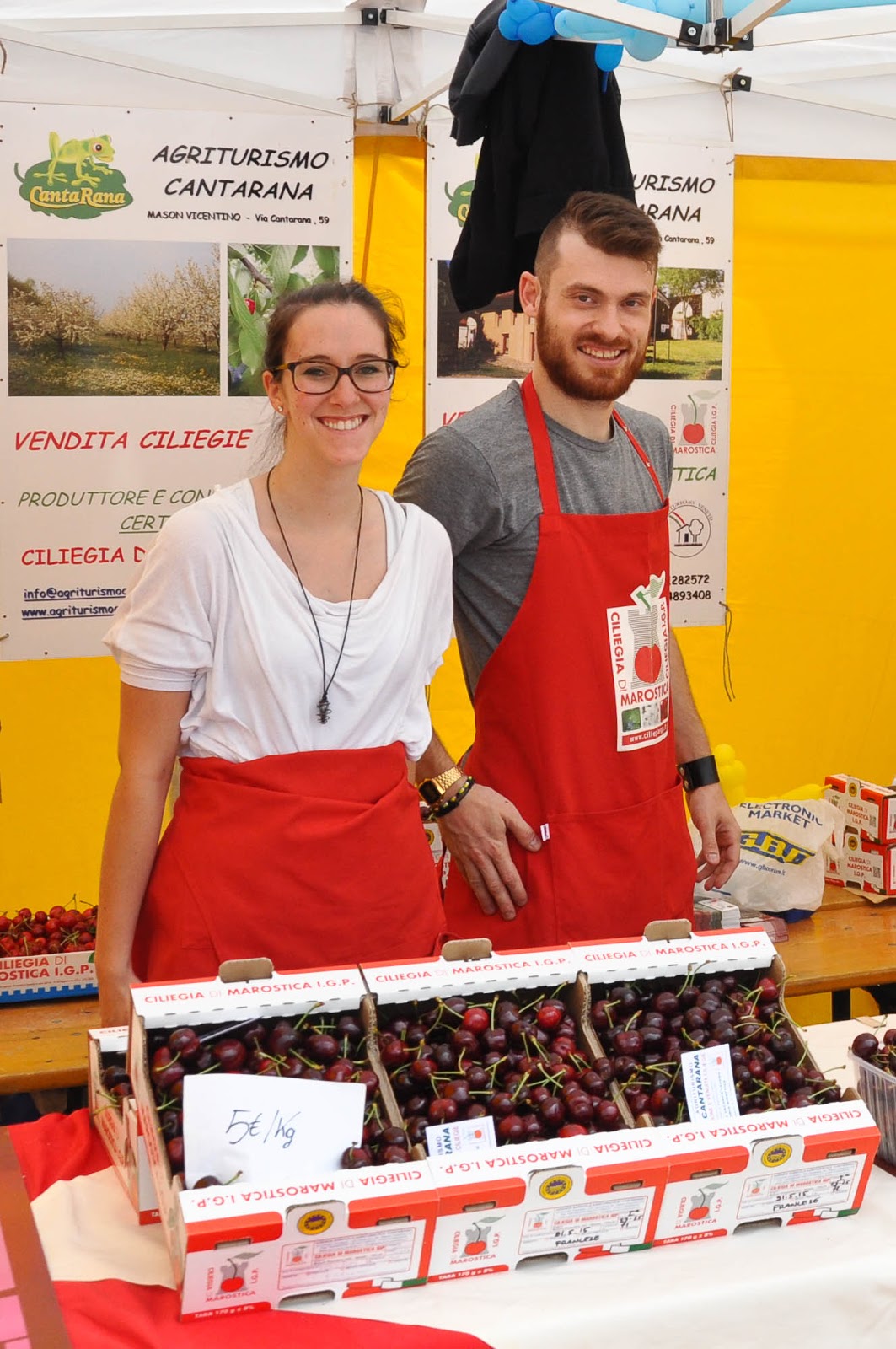 It gave us also a chance to sample cherries and buy some for ourselves. 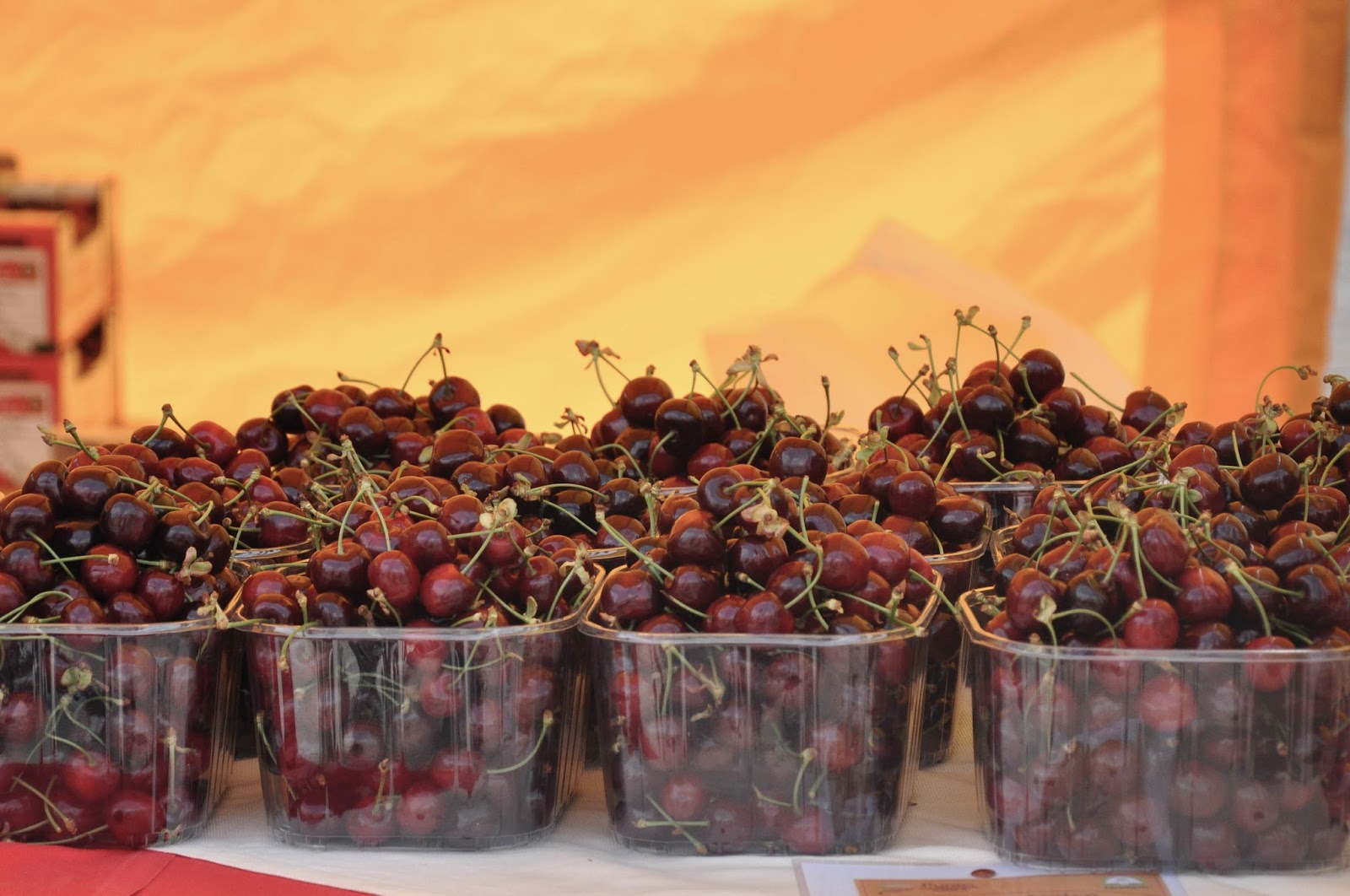 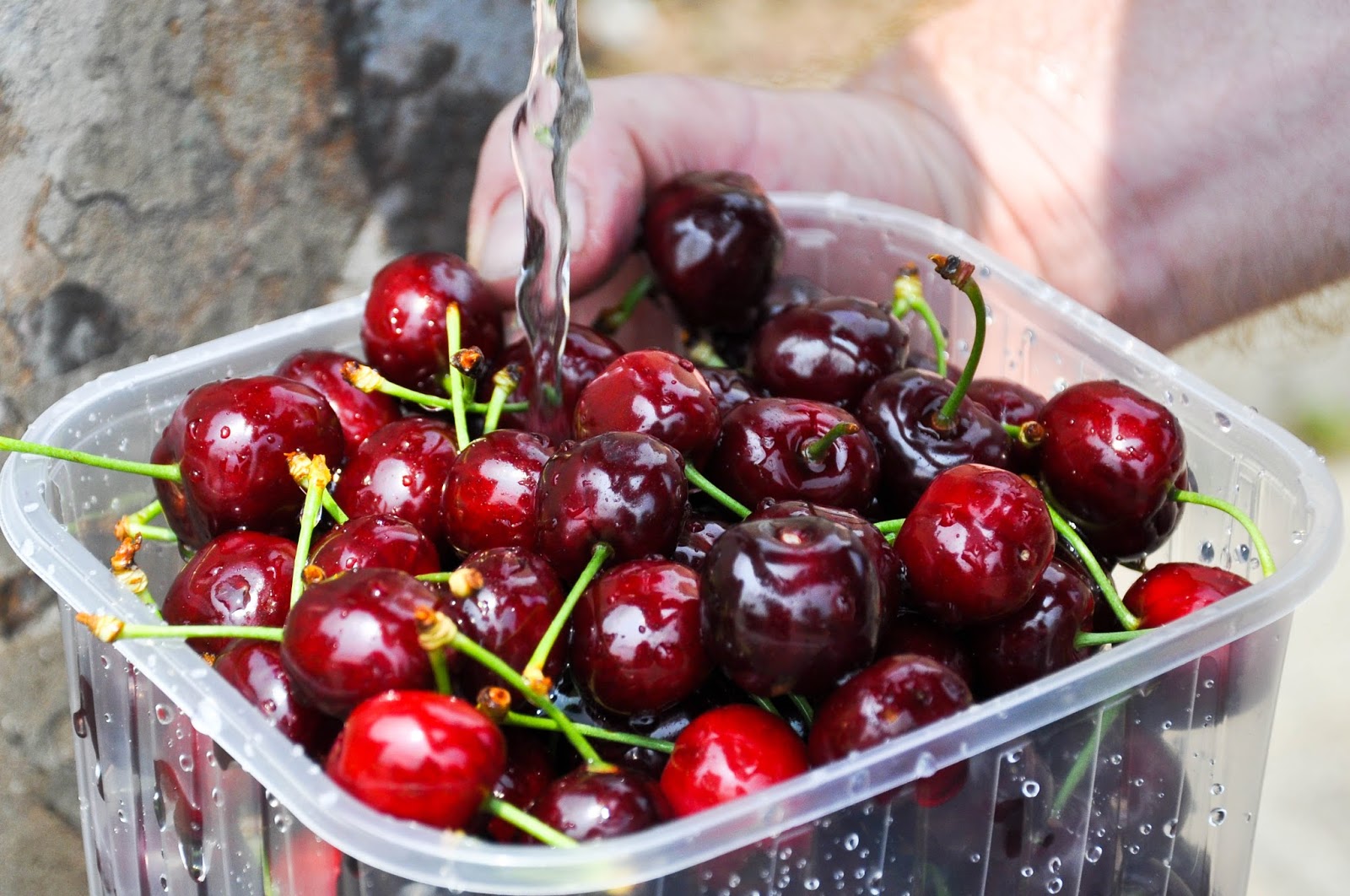 … and then walked past the beautiful houses of Marostica… 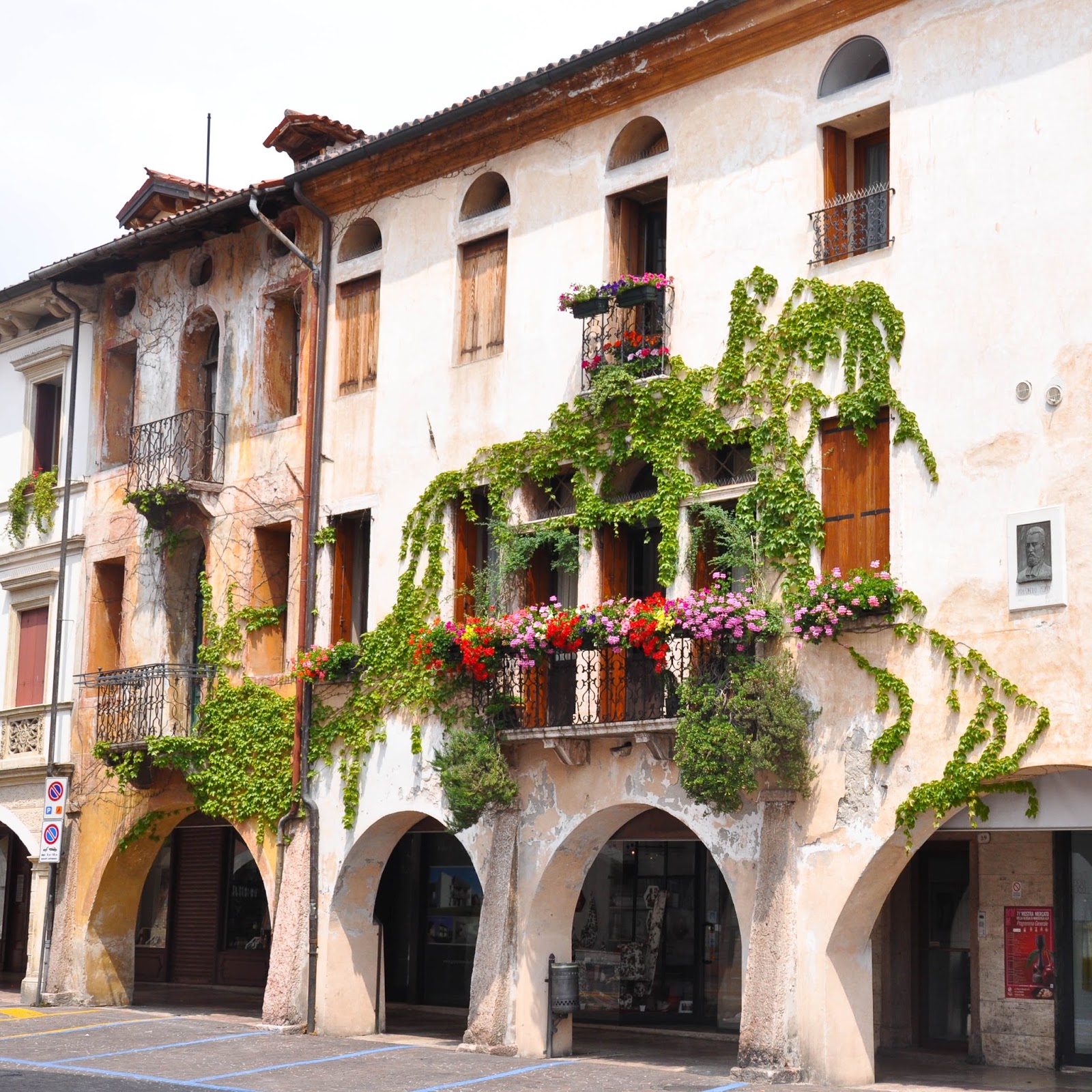 … looking for a quiet place to sit down and enjoy our loot!

There is something so carefree and summery in eating cherries sitting on a stone wall under the deep shadow of a tree. Their succulent heart-shaped bodies burst with the combined sweetness of the many days spent in the sun – from a tiny blossom to a fully formed fruit ripened on the branch. The sweet juice ran down our fingers and palms staining them with its dark tones. Rummaging in our box with cherries, we were competing to pick the largest one, as local cherries are known to grow up to a gigantic diameter of 3 cm.

It was juicy, it was fun and in a nutshell, the Marostica cherry was a beauty to taste.

After that we wandered round the town square a bit more, where a stall was set up by a local collective hand weaving baskets, bags and hats. 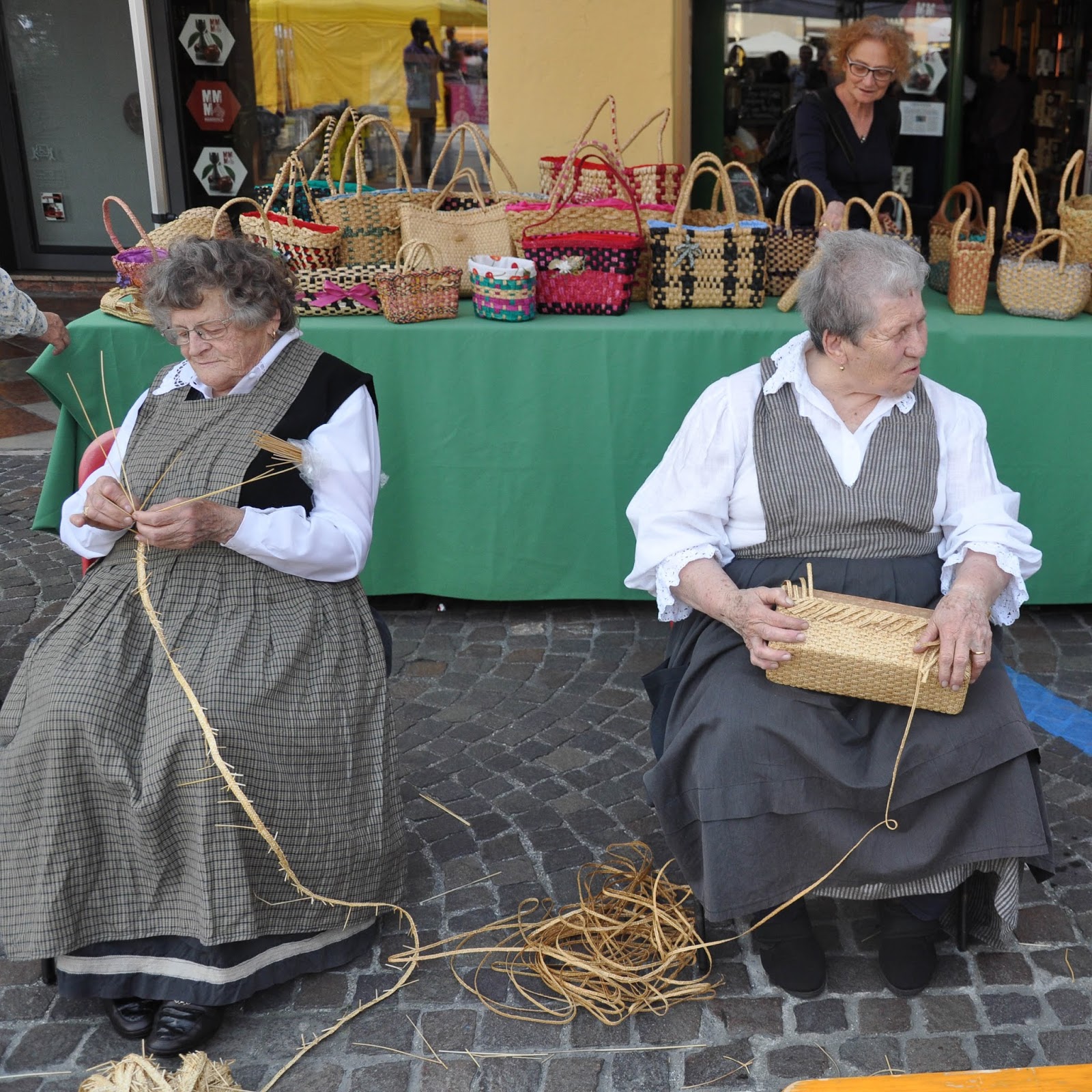 I enjoyed observing the old process being passed through to a new generation of skilled craft ladies. 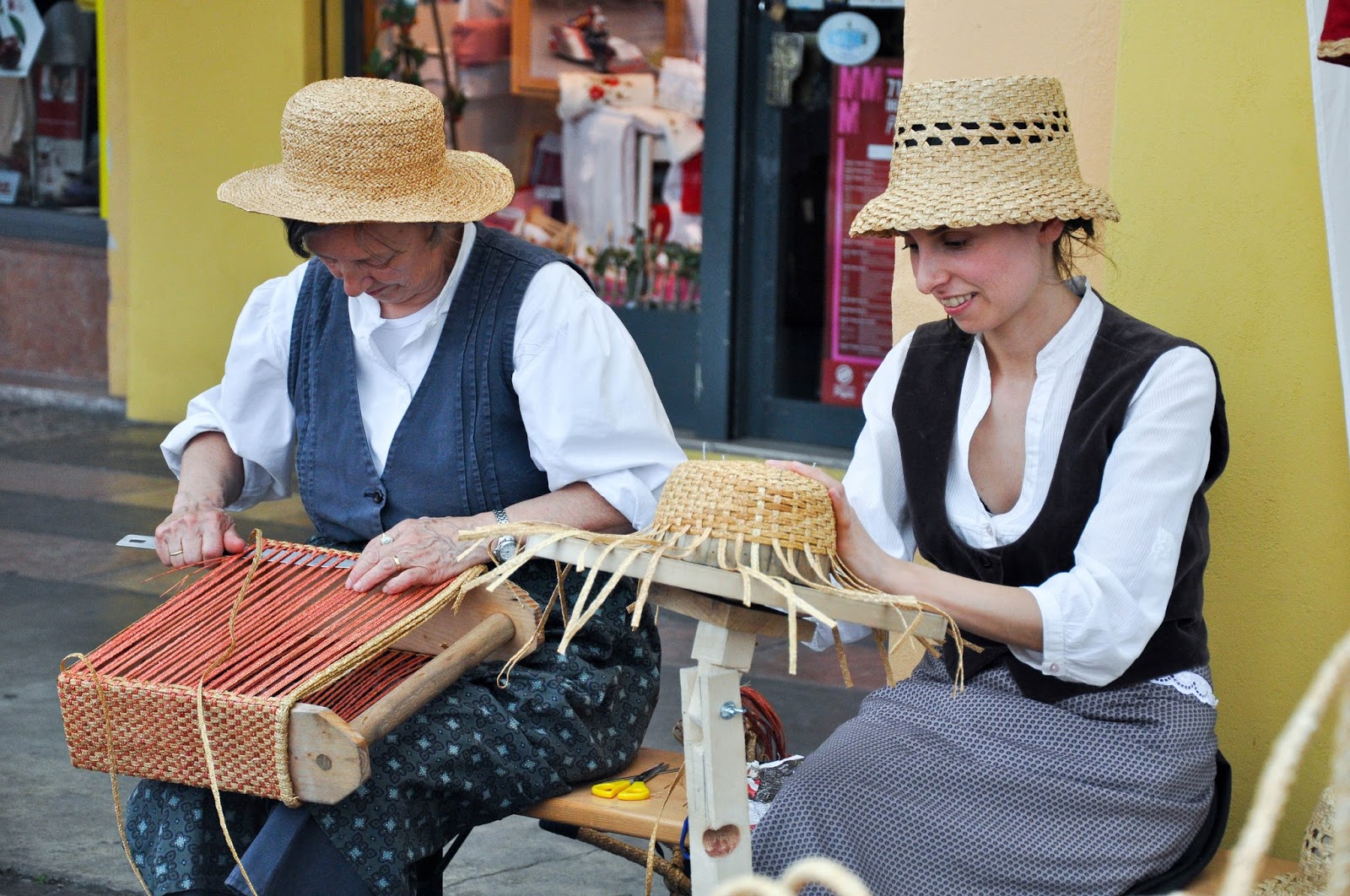 The square was now filling up with people all eager to get their cherry fix. The farmers were busy straightening their displays and serving the exacting customers. 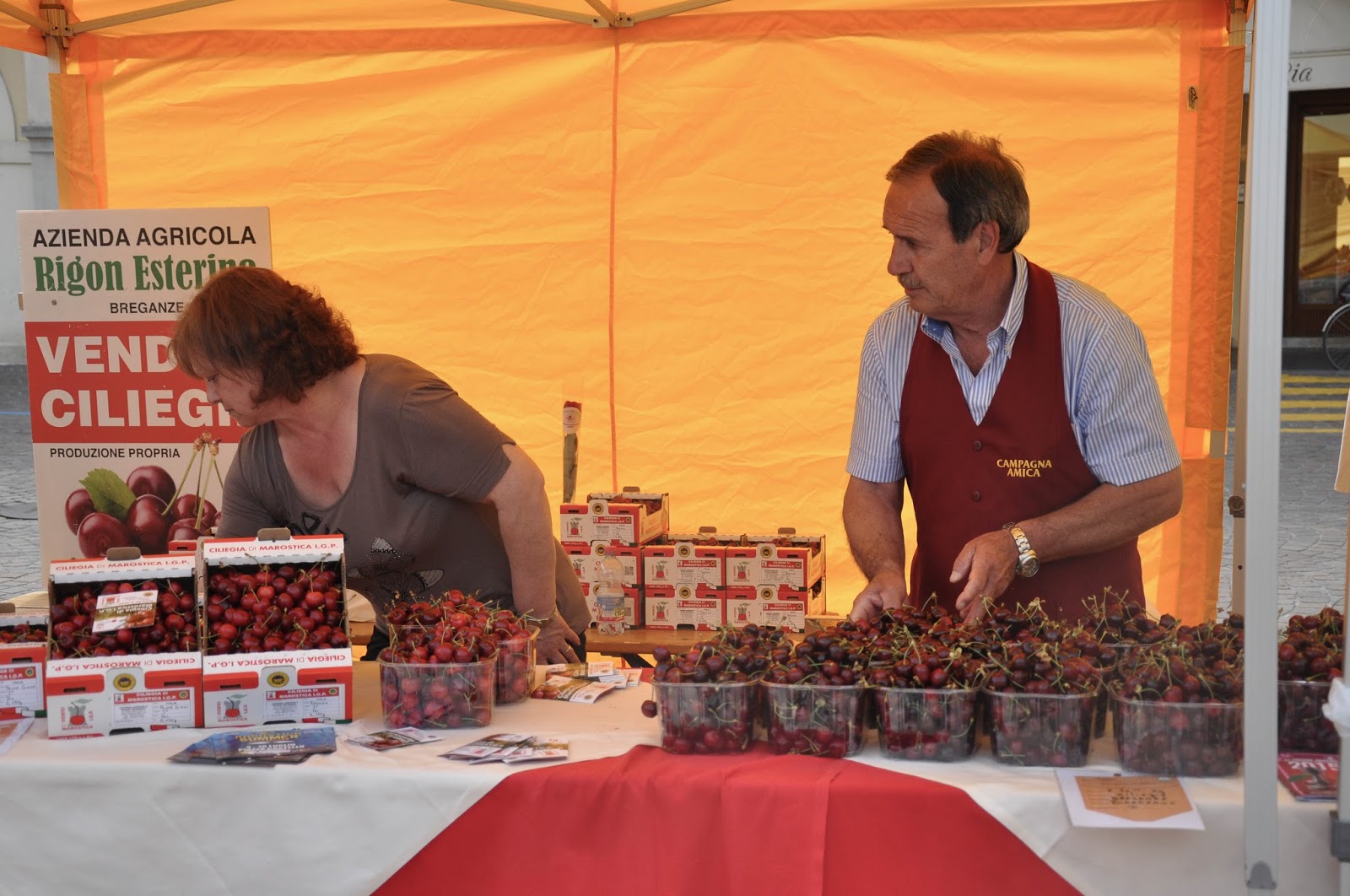 The stand selling focaccias with Marostica cherries was also doing a brisk business. 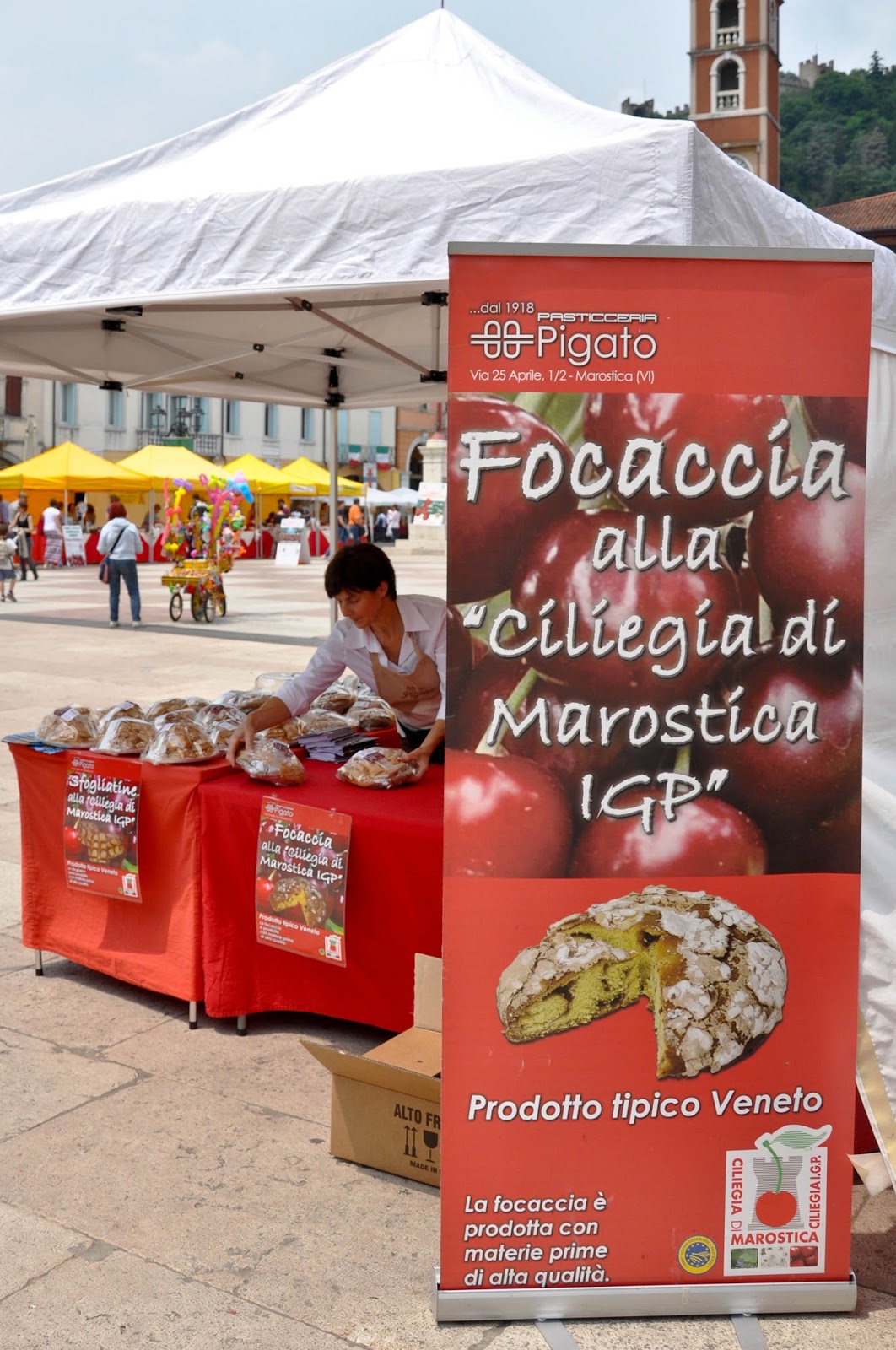 In the end, a real delight was waiting for us in the courtyard of Marostica’s Lower Castle. There, underneath the medieval beams of the loggia was set up this amazing spread. 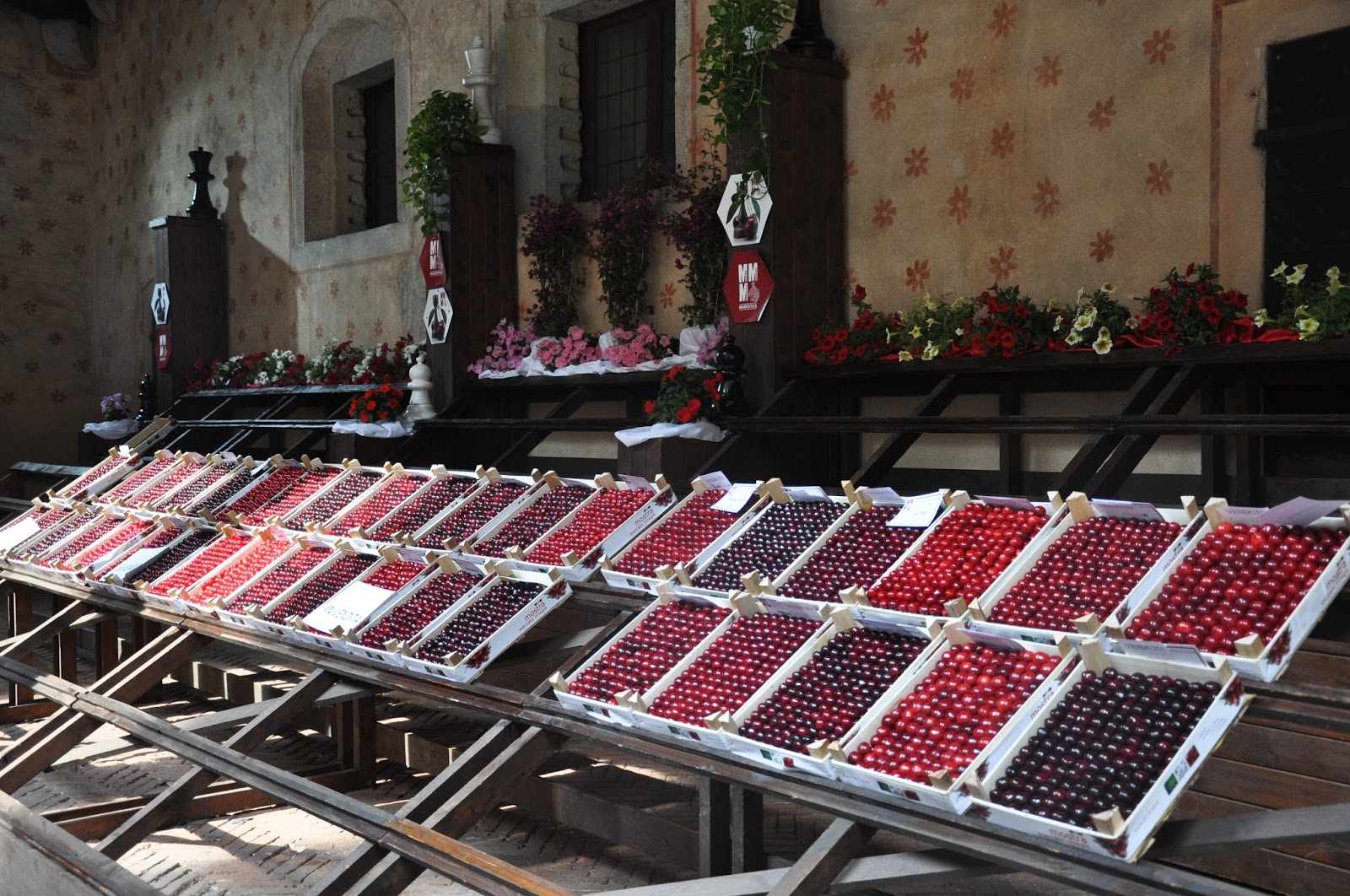 Crates of premier cherries were glistening in the light like pure gems. 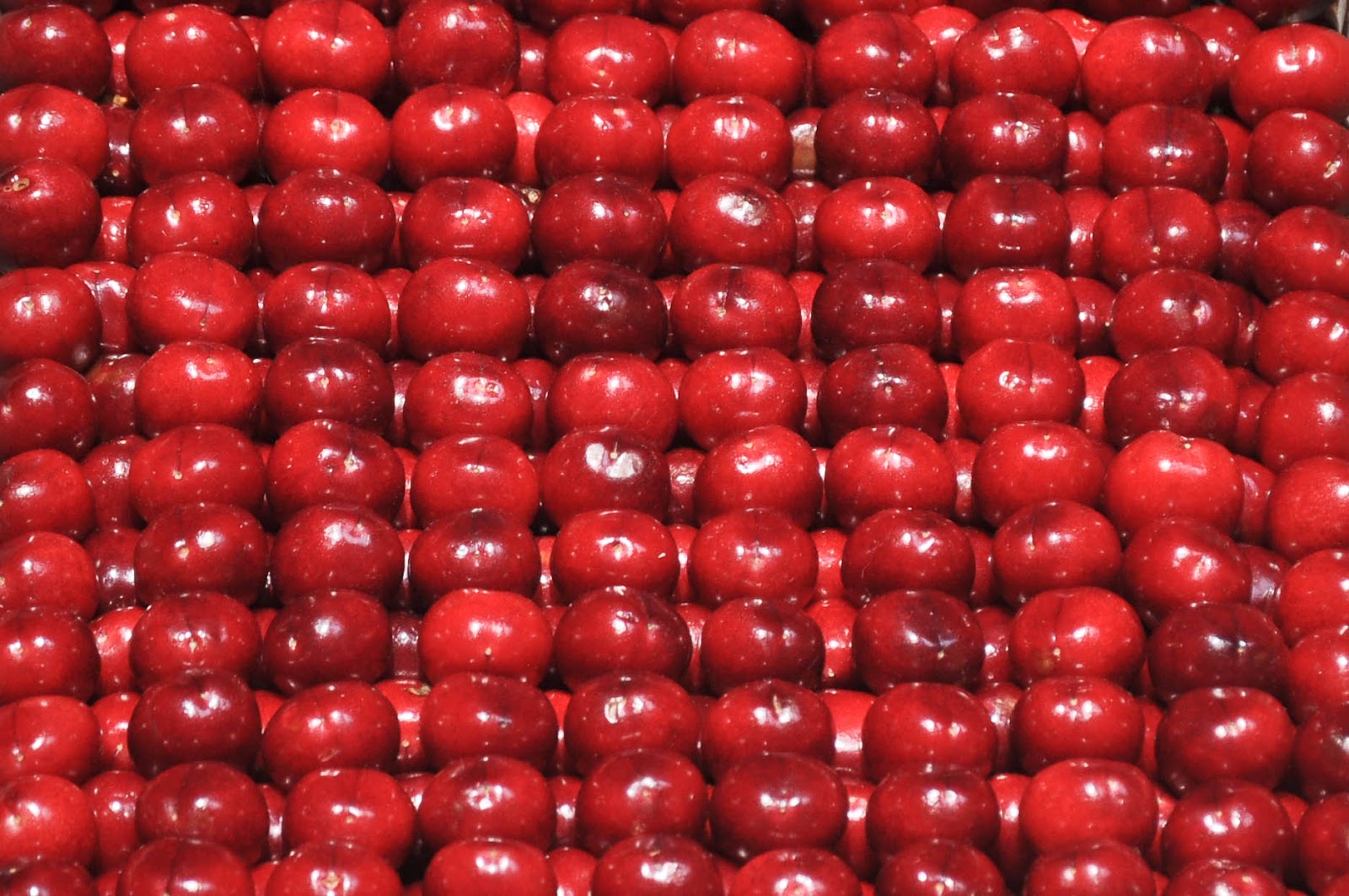 A crate cost 25 euros and contained between 3.5 and 4 kg of fabulous cherries. Once a crate was sold, the seller would place a note on it with the name of the buyer, then move it to the end of the display waiting to be collected as and when the buyer was to head back home. It was time for us to go, too. So, we waved Marostica good-bye. 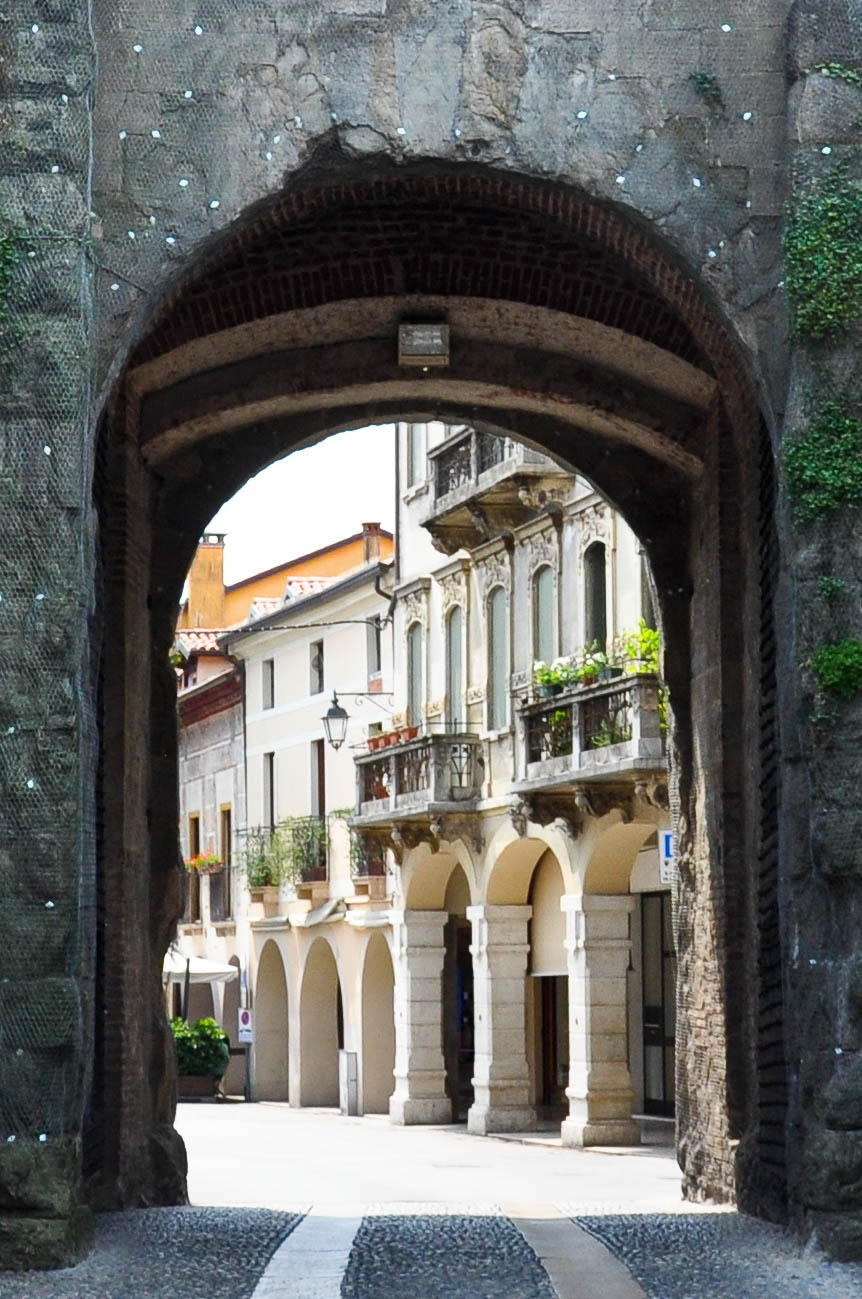 Before we headed back to Vicenza though, we took a slight detour and drove up the famous Road of the Cherries which starts a few miles outside of Marostica’s defensive wall.

The road leads up to the green hills and it is brimmed with cherry orchards with trees covered in fruit.

It was very peaceful and beautiful to see. 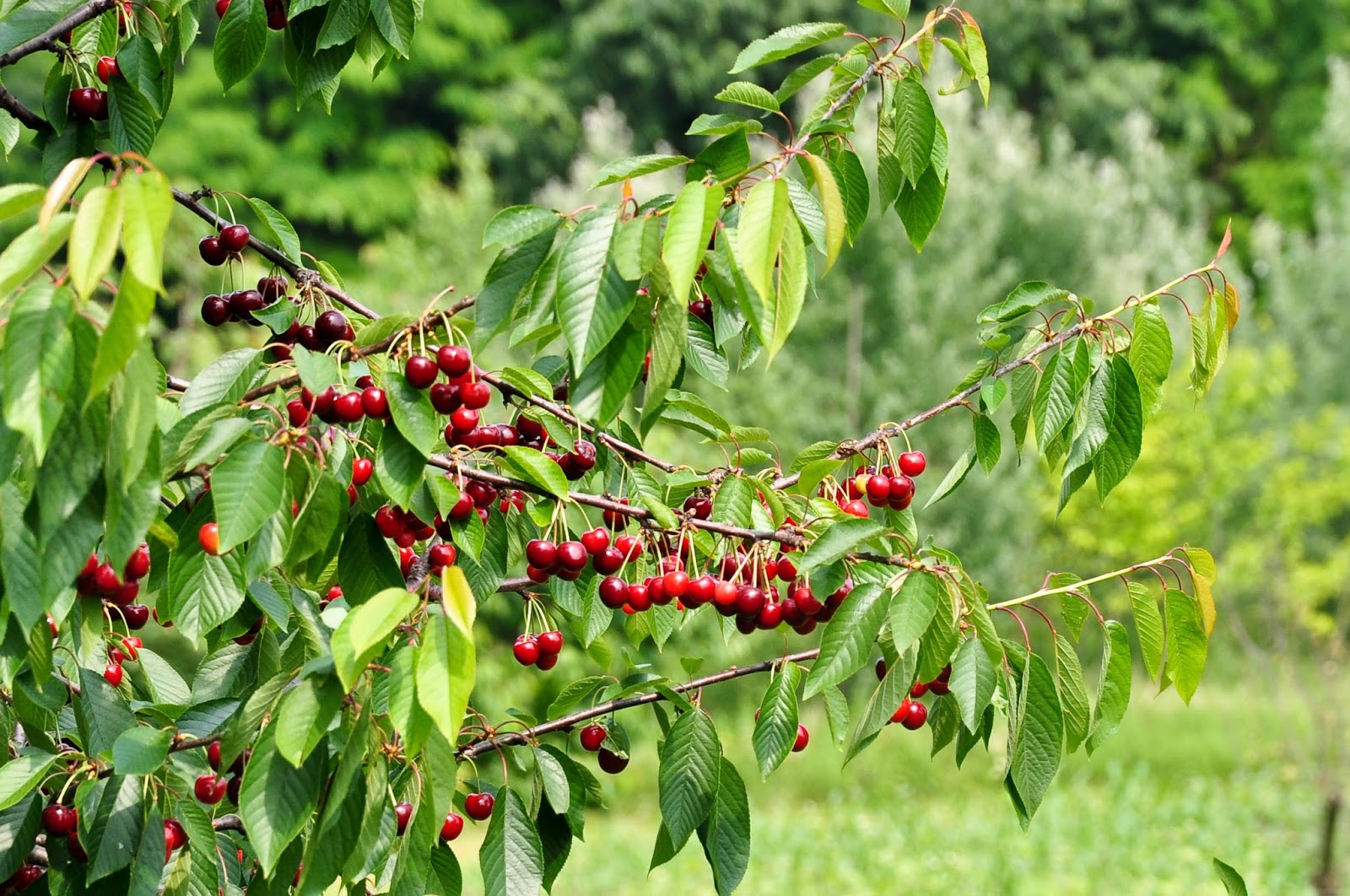 Ladders were propped up here and there against the trees, waiting for the cherries to be picked and placed in branded crates.

If you ever come across one of these, don’t miss the opportunity to make it yours. Quite frankly, it will be the cherry on the cake! 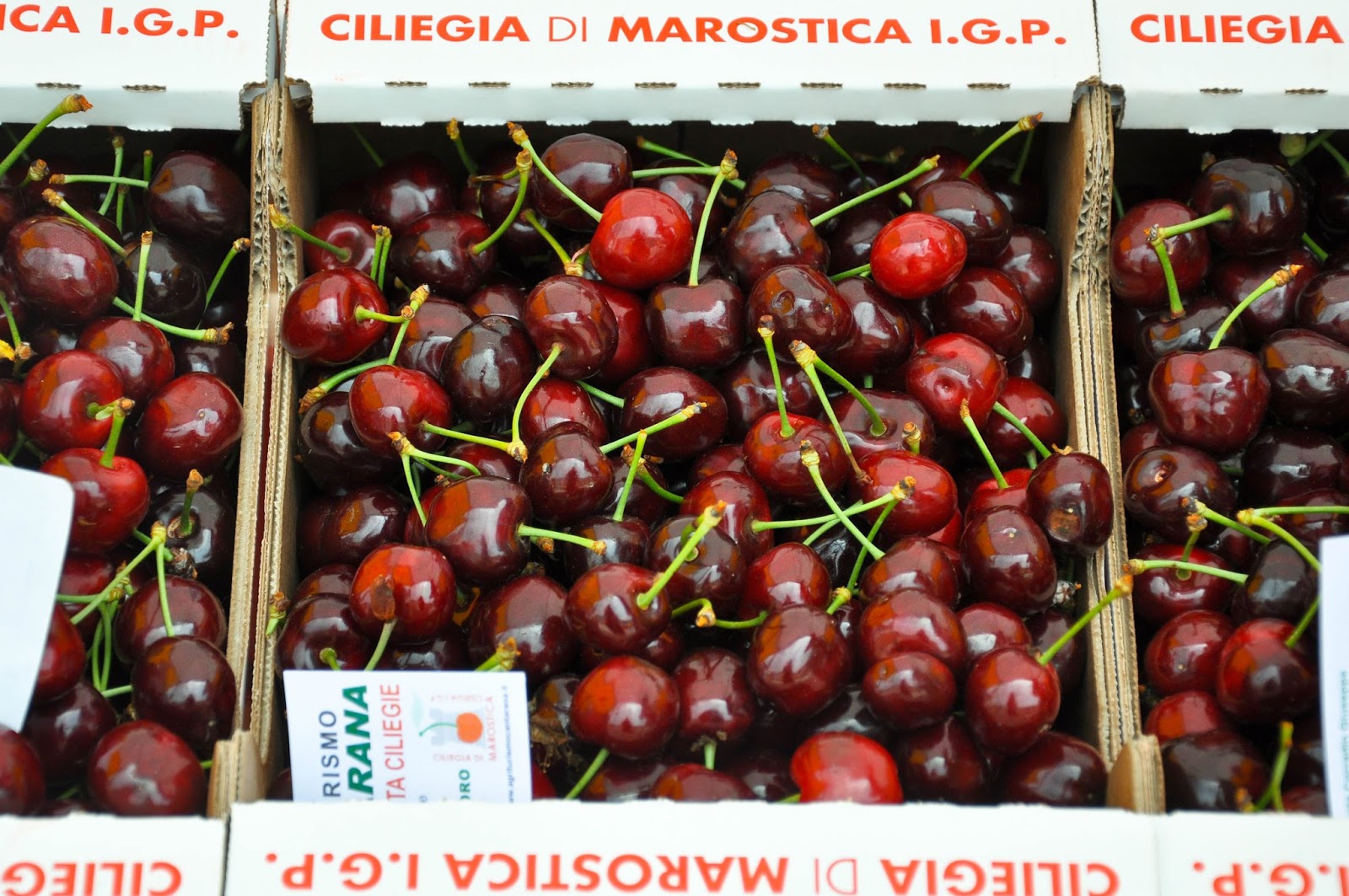