Touch wood, I rarely have bad moments here in Italy. Last Saturday though had all the ingredients for a really bad day.

It all started so well!

A beautiful morning with a blue sky and bright sun beckoned us to pile in our little red car and go exploring. So, we quickly drafted a plan. We were to:

With such illustrious places on our travelling plan, the day was meant to be spectacular.

Yet, within the course of a few hours:

Oh, and we didn’t get to see the botanical garden.

So, there you have it. Needless to say, my happy Italian bubble deflated just a tiny little bit.

Here is what happened.

We arrived in Padua mid-morning, found a garage, a surly parking attendant told us the price and we left for the University. Once there we bought tickets for the tour that takes you to see (among other things) the Aula Magna of Galileo Galilei and said Anatomical Theatre, where since the 16th century they would be conducting dissections for the medical students to learn about the human body and what-not.

The tour guide arrived right on time, warned us that no pictures should be taken inside the rooms and led us into the Aula Magna, where Galilei would give lectures during his 18 years tenure at the University. There we were split into two groups – Italian speakers on one side and English speakers on the other.

Just as the guide started telling us about this magnificent place, my toddler daughter began to cry. My husband hugged her and immediately took her outside, so as not to inconvenience the rest of the group. At which point, the guide turned to the Italian group and said (perhaps by mistake) in English: ‘Maybe she didn’t like the museum!’.

Now, I have to be honest and say that I don’t like people talking about other people behind their back, especially when it is a small toddler, who cannot speak up for herself. Very apologetically, I said: ‘Look, we have taken her to a lot of museums and she has never cried. I don’t know why she is so upset now’. The guide replied that she shouldn’t have said anything and proceeded with her talk.

The information the guide provided was very interesting, the rooms she showed us were spectacular, the Anatomical Theatre was exquisite in its design.

Half way through all this though the guide looked at me from across the room and said in her microphone: ‘It is such a nice and sunny day. Perhaps you would feel more comfortable outside?’.

The reason for this being that my toddler, after rejoining the group, was not fully silent throughout the tour. I was holding her in my arms, trying to blend in a corner and lagging way behind the group, so as not to inconvenience anyone, but she simply would keep chattering away in her little voice and a couple of times tried to get down on the floor. I didn’t let her, only too aware of people making snap judgements about parents unable to control their children.

This is when the guide in a polite, but rather firm tone sent me off on my way. My opinion was not asked, it didn’t matter that I was also a paying customer.

Parents, have you been in a similar situation before?! Eager to see things, to learn things, to share the amazement of discovery with your children? Only for them not to behave as appropriately as other people would have liked them to behave, in spite of all your efforts to soothe them?

I feel your pain.

That walk of shame in front of the whole group upset me no end. I didn’t protest, didn’t challenge the tour guide. I just looked at my husband on the way out and very quietly told him: ‘But I didn’t want to leave…’ and then I left. He followed me outside where, both lost for words, we waited for the group, who knew how to behave, to finish the tour unperturbed by us.

Actually, I did insist that my husband went back inside so that he could see the wonders the University charges you to see and which I was missing, because, in spite of all my efforts, apparently my toddler and I were considered a nuisance.

Honestly, in a country where everyone loves children and children are welcome in restaurants long after their bedtime in England, for example, and where in countless museums we have had the pleasure of many members of staff approaching us and chatting happily with us and appreciating the wonder a small child feels in her first encounters with art, I really didn’t expect that the University of Padua would take such an offence to us.

The whole thing left me really stressed. I felt like I had failed somebody’s expectations of me as a parent (i.e. to successfully make my child be silent). I felt my throat drying up and tightening its grip around my vocal cords and a second later I was unable to speak. Every time I tried to conjure a sentence or even a word, I would produce just a gargle of strained whispers.

Needless to say this put a huge damper on the day ahead. Only aided by the fact that when we went to retrieve the car, the parking attendant asked for double the amount we were supposed to pay. Now, we may be foreigners, but, please, don’t assume automatically that we would be stupid, too.

By the time we had moved the car closer to the botanical garden, it was nearing 1:30 pm. Bear in mind that the garden closes at 3 pm during the winter season, so we didn’t have much time to explore it in detail.

So, thinking on our feet, we decided to drop the plan, unsuccessful as it had been, and simply have coffee somewhere as at least the weather wasn’t letting us down.

We found this little cafe just opposite the emblematic for Padua St. Anthony’s Basilica. The lady behind the counter was incredibly helpful and nice. She chatted with us for a while, cracked little jokes and made us feel at home.

Seated at our table, having some lovely Italian coffee topped with thick whipped cream and a slice of almond cake, a thought sprang in my mind. 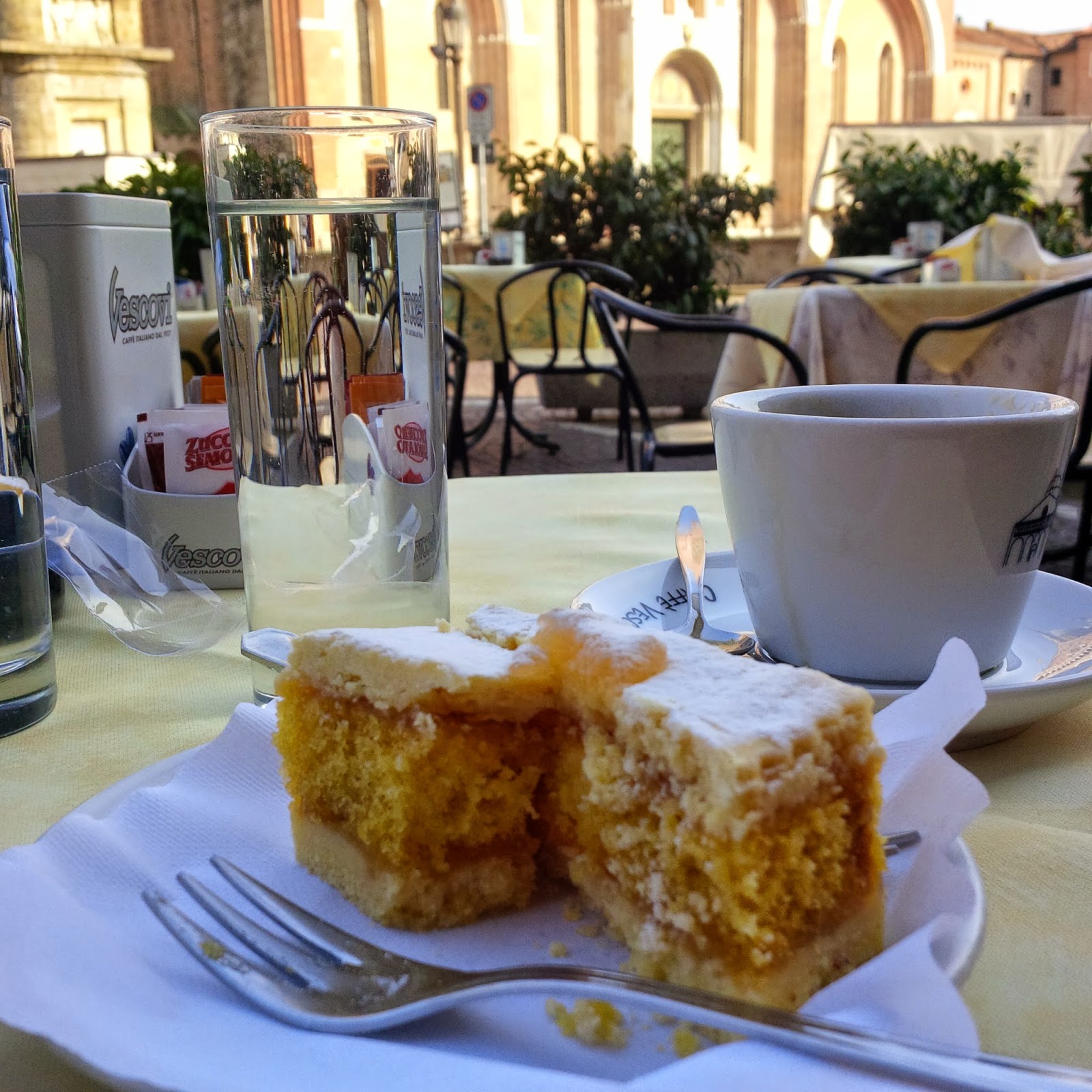 It was a quotation I had glimpsed that same morning in my Facebook news feed. You know the kind – life-affirming, positive messages typed with a fancy font against an inspiring backdrop which your social media friends post on their accounts to express how they feel about the world.

This one in particular had said: ‘There are people who would love to have your bad days!‘.

That was so true! Yes, we had had some glitches, we had met some people I wouldn’t care to meet again, but all in all life was still grand. I was seated together with the people I love the most under the blue Italian sky, feasting my eyes on a beautiful basilica with a statue of Donatello right in front of it and having a cake!

This was not bad! 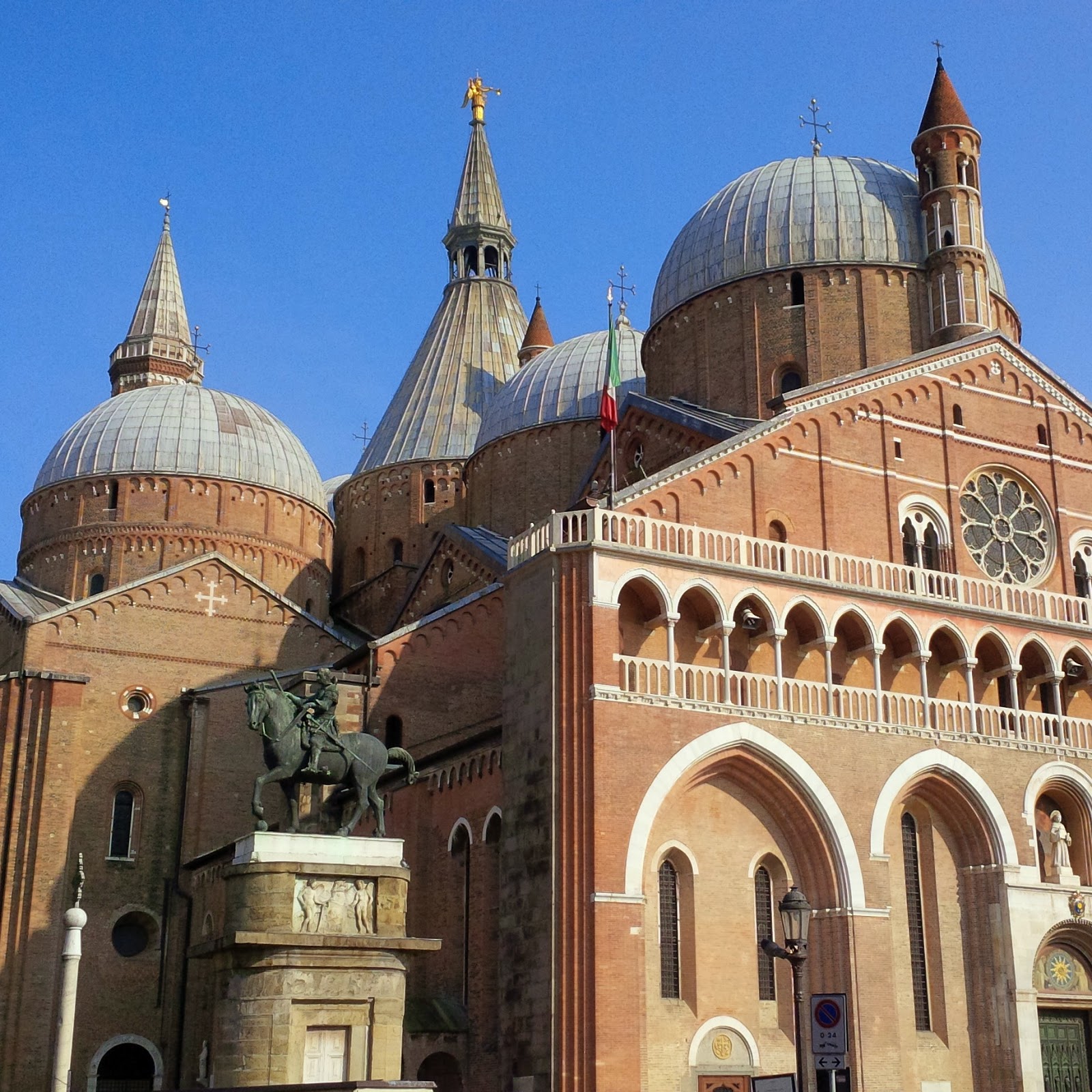 I felt like my happy Italian bubble started to expand again.

After our coffees, we went for a walk around the cloisters of the St. Anthony’s Basilica. It was peaceful and quiet, a beautiful place to sit down and watch the minutes pass you by. 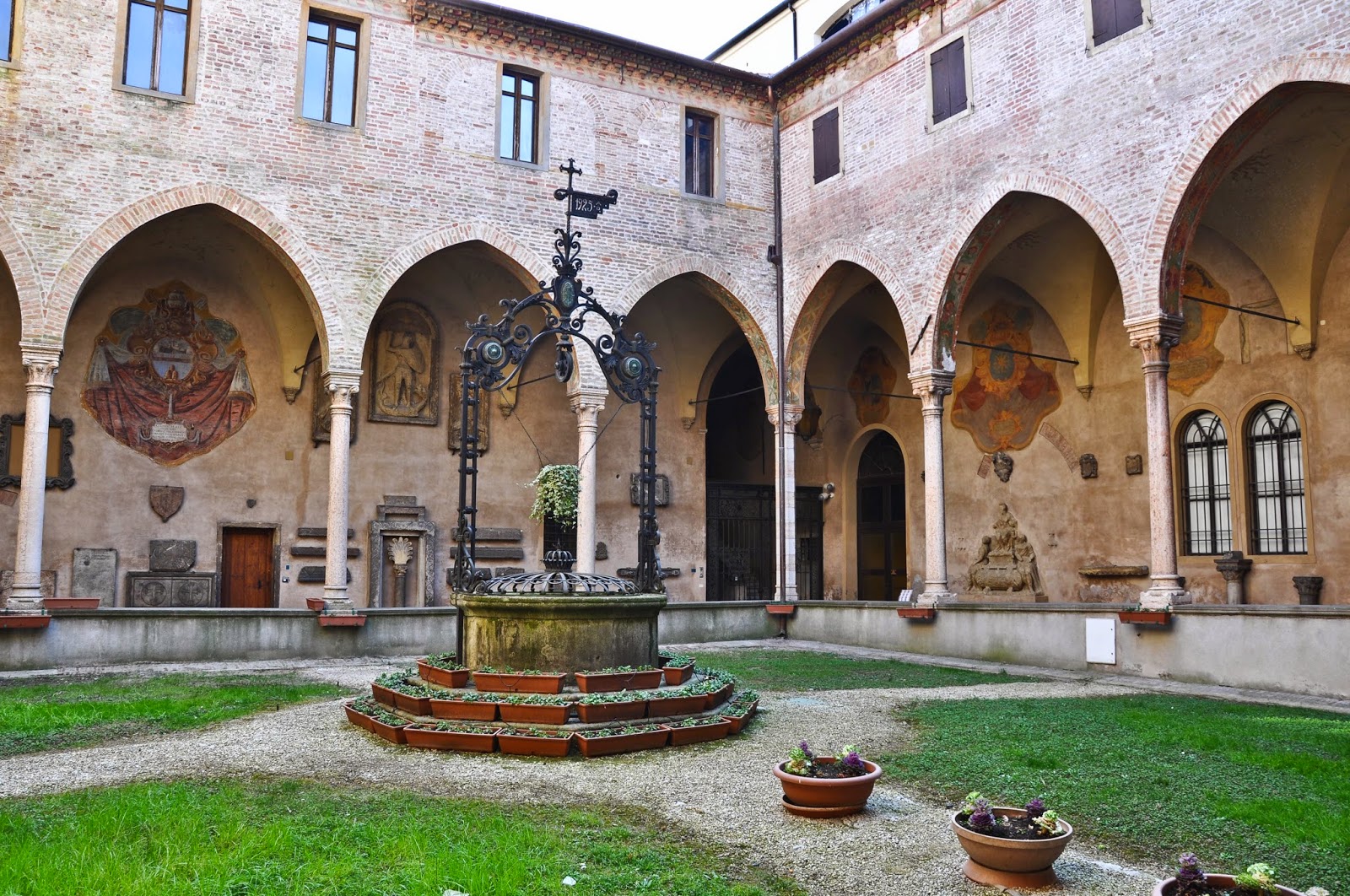 Then we walked into St. Anthony’s School – the meeting room of the confraternity, which is covered in frescoes by Titian. It is right next door to the bustling with people basilica, but it was very quiet, with no-one but ourselves making the pilgrimage up the elegant staircase to admire the fabulous frescoes by the greatest Venetian artist of the 16th century.

Surrounded by exquisite art, I felt happy and grateful inside myself. Grateful that I changed my mindset about the day and that I could still enjoy life no matter the strong negative emotions that sometimes come my way. 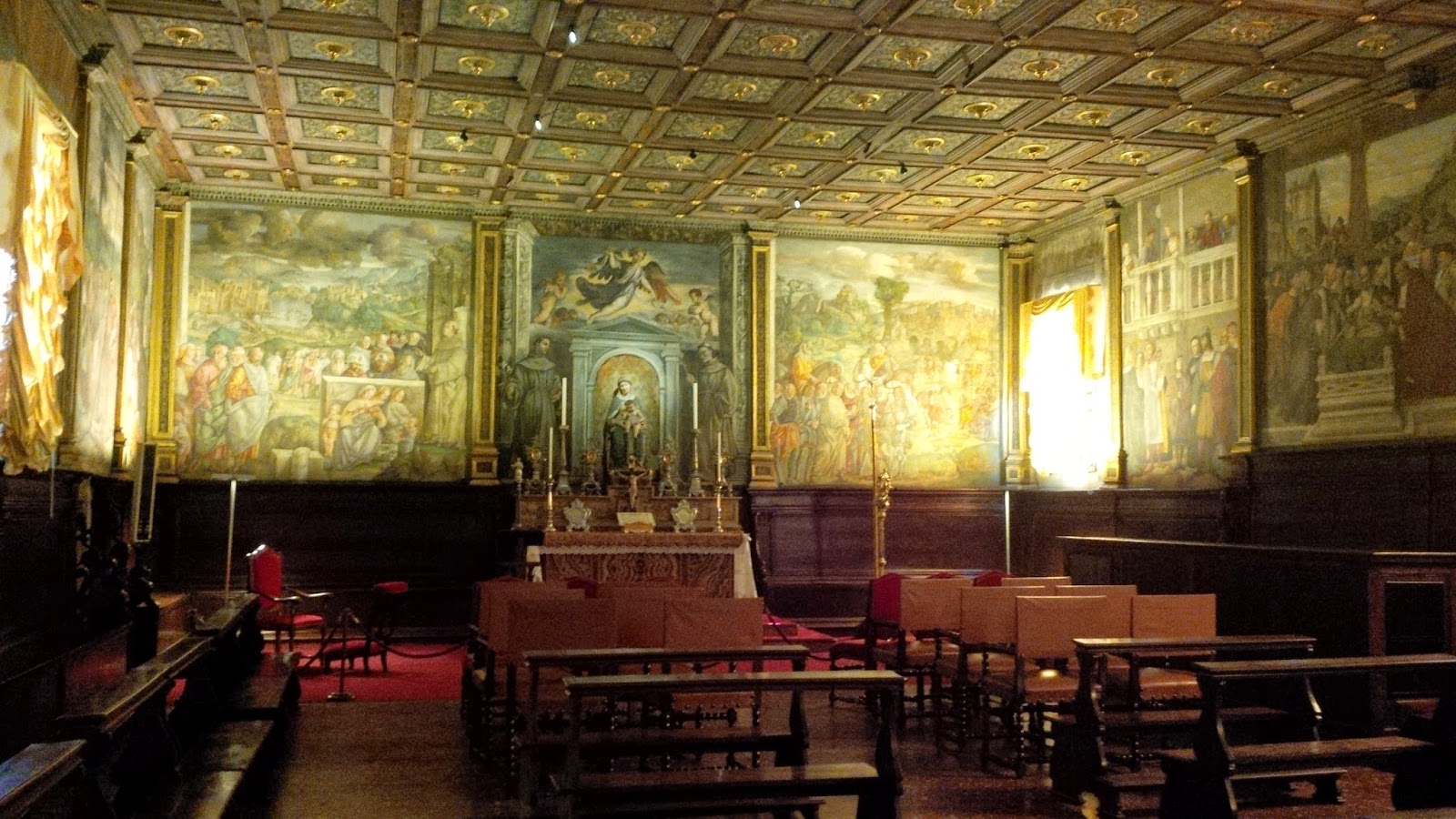