I have a confession to make…

The biblical story of Mary and Joseph looking for a place to stay in Bethlehem has always made me want to cry. And, no, I am not really religious at all. It’s just that the image of a woman, heavily pregnant, being sent away in her innermost hour of need, only to find refuge in the humblest of abodes, never fails to tightly grip my throat.

For political reasons Christmas was not officially celebrated in Bulgaria until 1989. After the fall of the Berlin Wall, religion and its practice were quickly re-established and, I remember, every Christmas the Bulgarian National Television would broadcast the service from Bethlehem. It is held in the church built where once allegedly stood the simple manger that was the first cot of the Son of God.

I wouldn’t really pay that much attention to the service itself. Instead, I would imagine Mary, tired after a long and strenuous journey made in the advanced stages of her pregnancy, trying to find a place to complete her mission as a woman only to be told repeatedly that there was no space for her. This ultimate rejection filled me with sadness, that would choke my heart.

Since I’ve had my own baby the sensation has only intensified. Giving birth is such a personal and vulnerable experience, a woman needs all the support and comfort she can get.

So, when I saw the posters around our Italian hometown of Vicenza that there would be a living Nativity scene taking to the streets of the centro storico, I really wanted to go. I envisaged a sombre and restrained event and I sort of expected to be overwhelmed once again by the human story of Mary and how she became a mother in the most humble of surroundings.

As such, in the early evening of the last Saturday before Christmas we hotfooted it into town.

Corso Palladio – the elegant main avenue of Vicenza – was filled with festive crowds shopping, chatting or simply relaxing in the numerous cafes and patisseries. Piazza dei Signori – the main square – was alight with the glimmer of thousand Christmas lights and the bright booths of the Christmas market.

We walked as fast as we could, as we needed to reach the Chiesa dei Servi, just off Piazza dei Signori, by 5:30 pm. According to the posters we had seen, the Nativity story would be told in that church right before the start of the living Nativity scene procession.

As soon as we approached the impressive façade of the chiesa, we spotted Roman centurions in full military regalia standing in front of it. Transported over 2000 years ago, we walked into the church.

It was full with all eyes set on the young man in front of the altar telling the story of Mary.

The angelic voices of the children’s choir added to the atmosphere of festive expectation.

Outside of the church the participants in the procession had started to gather. To my baby’s delight there were two donkeys and several sheep shepherded by men in clothes from ancient times.

Children and adults quickly surrounded the animals, eager to pet them gently. Squeaks of pure happiness erupted when we all realised that two tiny lambs were nestling comfortably in the saddlebags of each donkey.

The lambs were soft, with long ears and I just wanted to cuddle them and take them home. 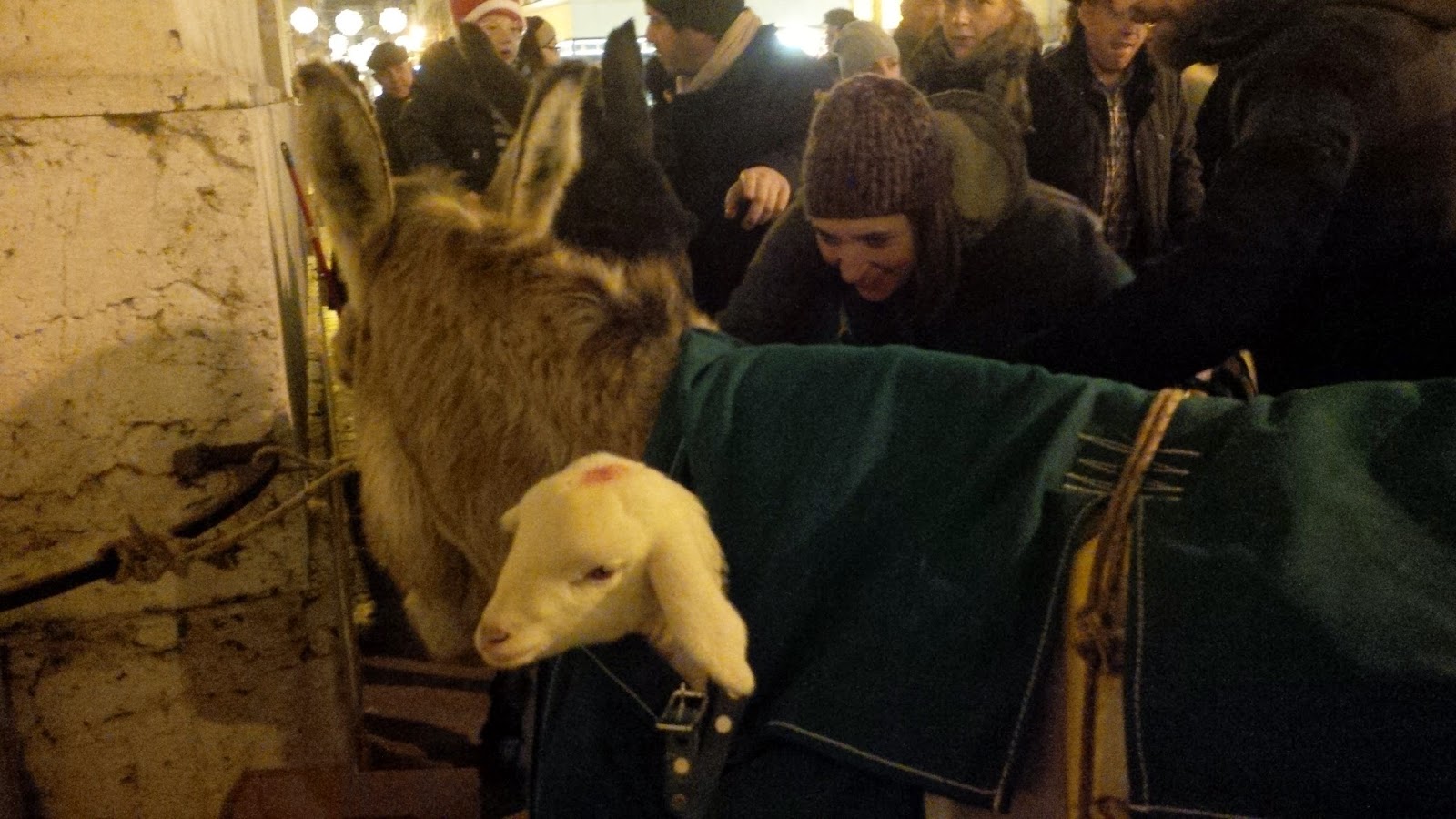 In the middle of my rapture one of the Roman centurions politely asked us not to use flash, as one of the donkeys was afraid of flashing cameras. Of course, his request was taken to heart by me. The downside were the yellow-ish, badly smudged pictures I was left with, but I would rather the donkey were happy and relaxed.

In the meantime, the crowd had grown significantly and even more participants in the living Nativity scene procession started to come out of the church under the accompaniment of a joyous melody performed on an ancient bagpipe.

I sneaked right next to the musician and managed to take a picture of him under the glare of the television camera that was recording him for the local news.

After that Mary was helped onto one of the donkeys and supported by Joseph, she led the procession of centurions, craftsmen, shepherds and other various representatives of the society as it was over 2000 years ago.

At the end of the procession were the children from the choir, all dressed up as little angels.

The long procession turned and twisted from Piazza dei Signori all the way to the elegant main avenue – Corso Palladio.

And just then the most amazing thing happened. The huge crowd of vicentini didn’t stay still observing the procession from afar. There were no barriers separating them from it. People simply joined the procession, became a spontaneous part of the Nativity scene and, together, costumed participants and modern day onlookers walked down the street following Mary in her blue veil.

The mood was high and thousand of Christmas lights were glimmering over our heads.

The crowd swelled up drafting people from the shops and the street cafes. At one point, all you could see ahead was a sea of heads.

The procession reached Vicenza’s Duomo, went round it and continued its way through the old part of town.

I was desperate to get a good photo of Mary. I tried, I really did. I held the phone in my outstretched hands above my head, I ran ahead with the procession, I slowed down waiting for the donkey carrying Mary to align with me.

Nothing worked! As soon as I was about to press the shutter button, Mary would turn her head to the other side or simply wouldn’t be looking in my direction to start with.

Later, when I thought about it a bit more, I saw the symbolic side of it. I didn’t need to see her face, she could be any woman and as such, all women deserve comfort and support when they need them most.

After a slow walk around the old town, the procession reached its final destination – the Chiesa dei Filippini, where it stopped.

Mary walked in the church followed by the different members of the living Nativity scene and hundreds of spectators.

Pushing the buggy and our baby safely seated in it, we stayed outside and chatted for a while with some of the participants in the procession.

We couldn’t resist comparing hats with them.

Everyone was jovial and friendly. People were smiling and stopping to pet the donkeys and the sheep and to wish ‘Buon Natale!’ to each other.

I felt elated and part of the community. A story that had always made me want to cry had finally revealed its positive message to me: no matter what tribulations we go through in life, no matter how many doors get closed when we desperately need asylum, there would always be a place, no matter how humble, where we would be accepted and feel at home.

Merry Christmas to you, all!