Skip to Content
This post may contain affiliate links. At no cost to you, I may receive a small commission if you click and make a purchase through them. Full details in my Disclosure.
Share
Tweet4
Pin
WhatsApp
Email
Share
Reddit
4 Shares
‘Mario, Mario! Piu’ alto, piu’ alto!’*, shouted the men. Everyone around them burst out laughing. Their friend, Mario, looked over, smiled good-naturedly, threw the flag high in the air and then expertly caught it again. The line of flag throwers moved ahead. 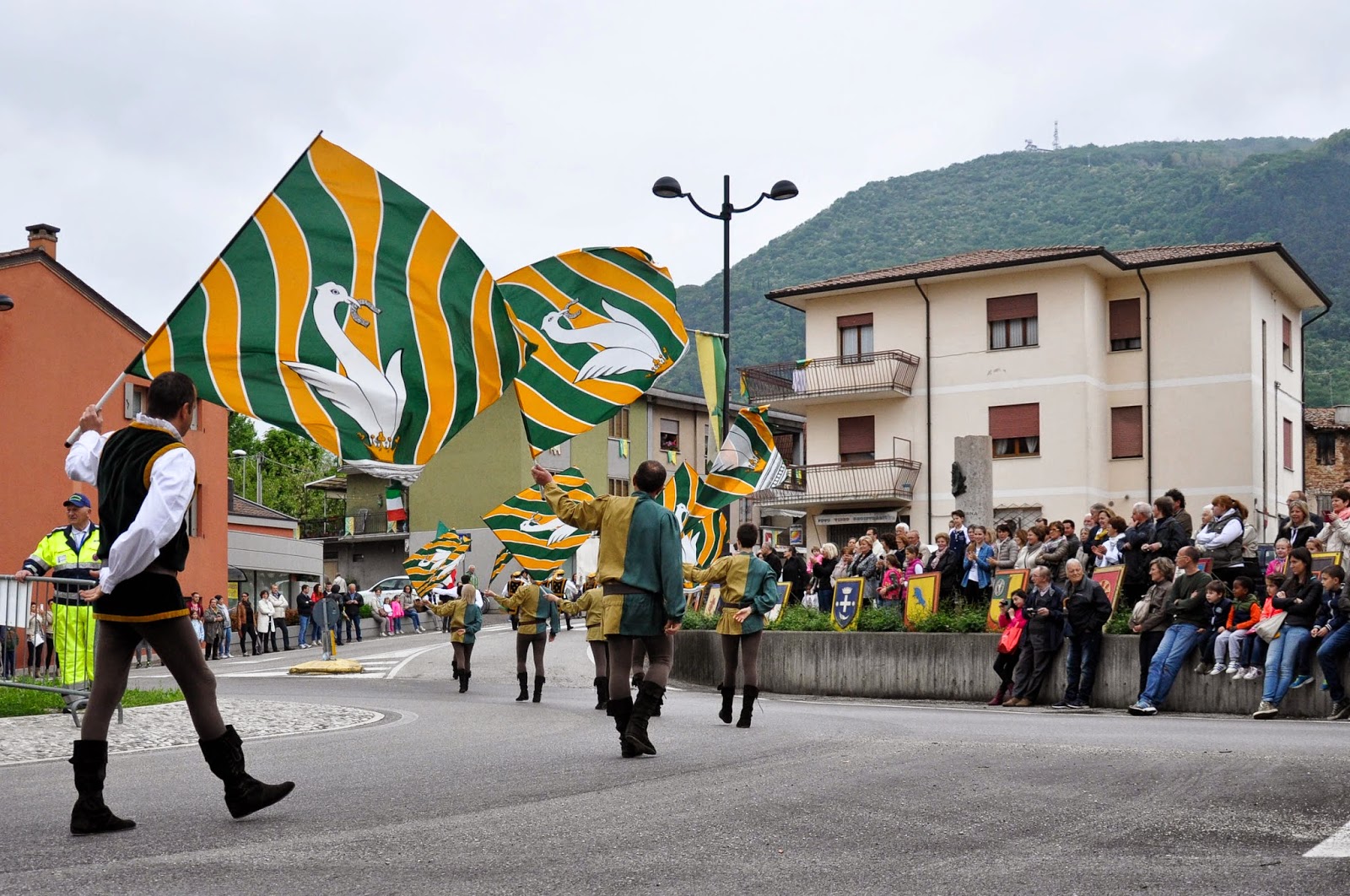 We were in Romano d’Ezzelino – a small town at the foot of the dewy Monte Grappa of the Venetian Prealps. A parade under the heading of ‘Rustic Corners’ was taking place right in front of us. There was a steady stream of donkey-pulled carts adorned with wild flowers and yellow corns, soldiers in uniforms from the First World War, groups of smiling singing children and adults dressed in clothes from times long gone by. The culmination of it all was to be a donkey race.
For now though the locals were crowding around the town’s central roundabout through which the parade flowed. 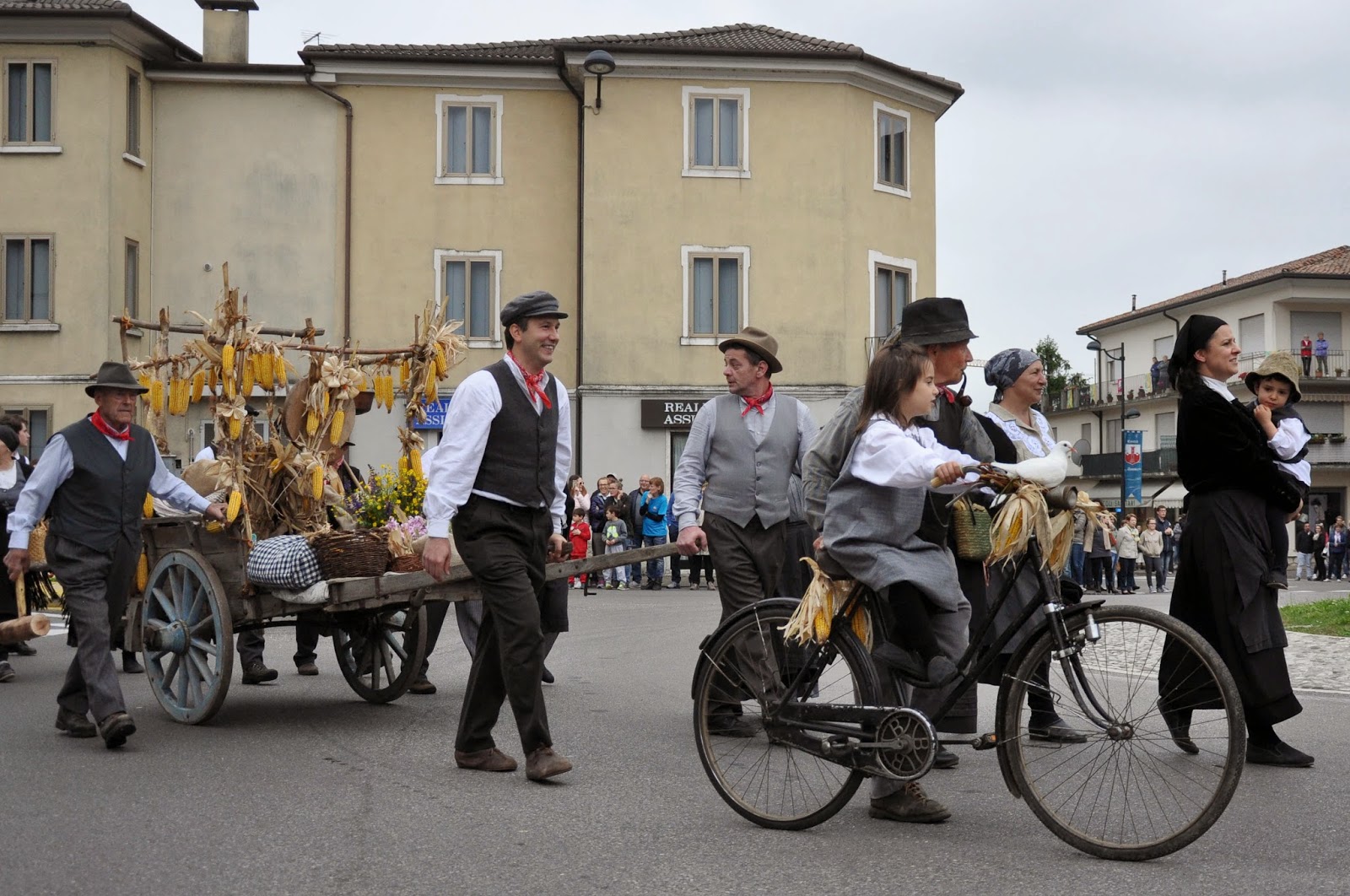 It was Sunday and we were there by pure chance. 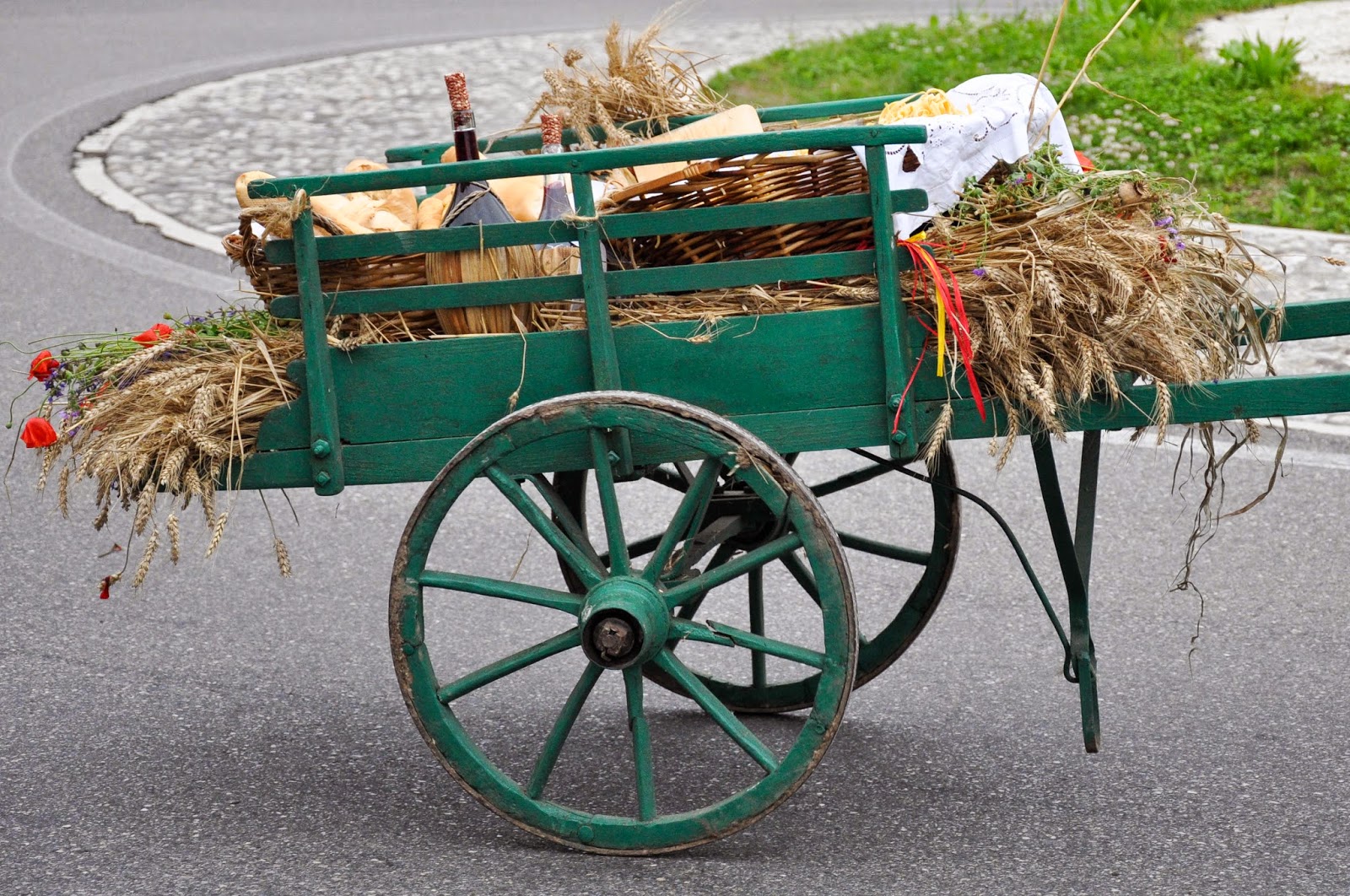 Always on the lookout for exciting local events to enjoy, we had come across the announcement for the rustic parade and the donkey race on a Vicenza website. At the same time we had spotted another festival held on the same day but in the opposite direction from the first one – a local frog and eel event.
It can’t get any more random than that!
Still, it was a very tough choice between the two.
Fluffy donkeys or a bowl of frog legs risotto?! A rustic parade or a plate of fried eel?!
We deliberated on it for 24 hours and only decided where to go once we were already piled in our little red car when the novelty idea of actually eating frog legs (I have tasted eels before) put me off.
So, donkeys won! 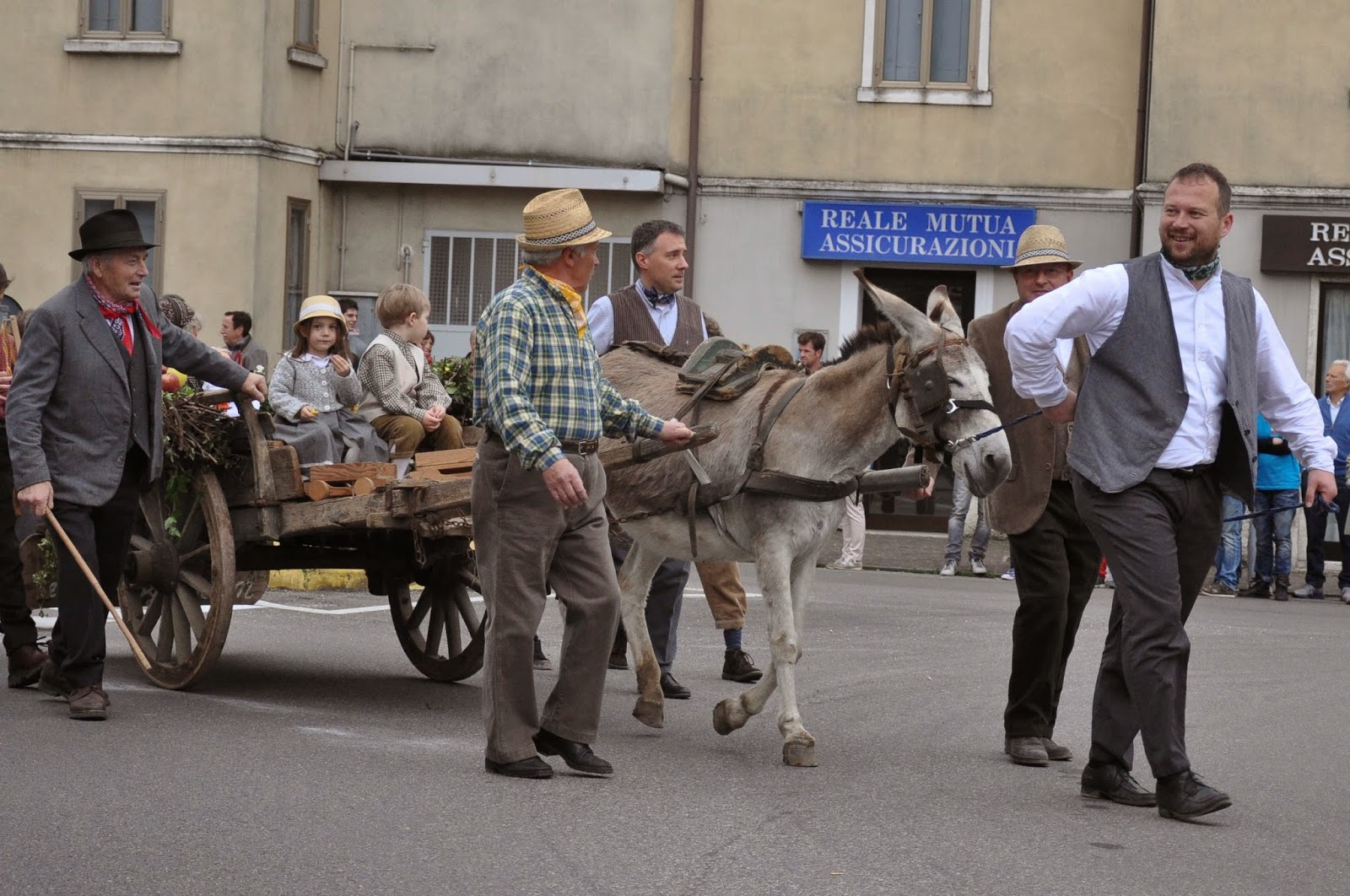 And I am so glad they did as it was a fabulous day! 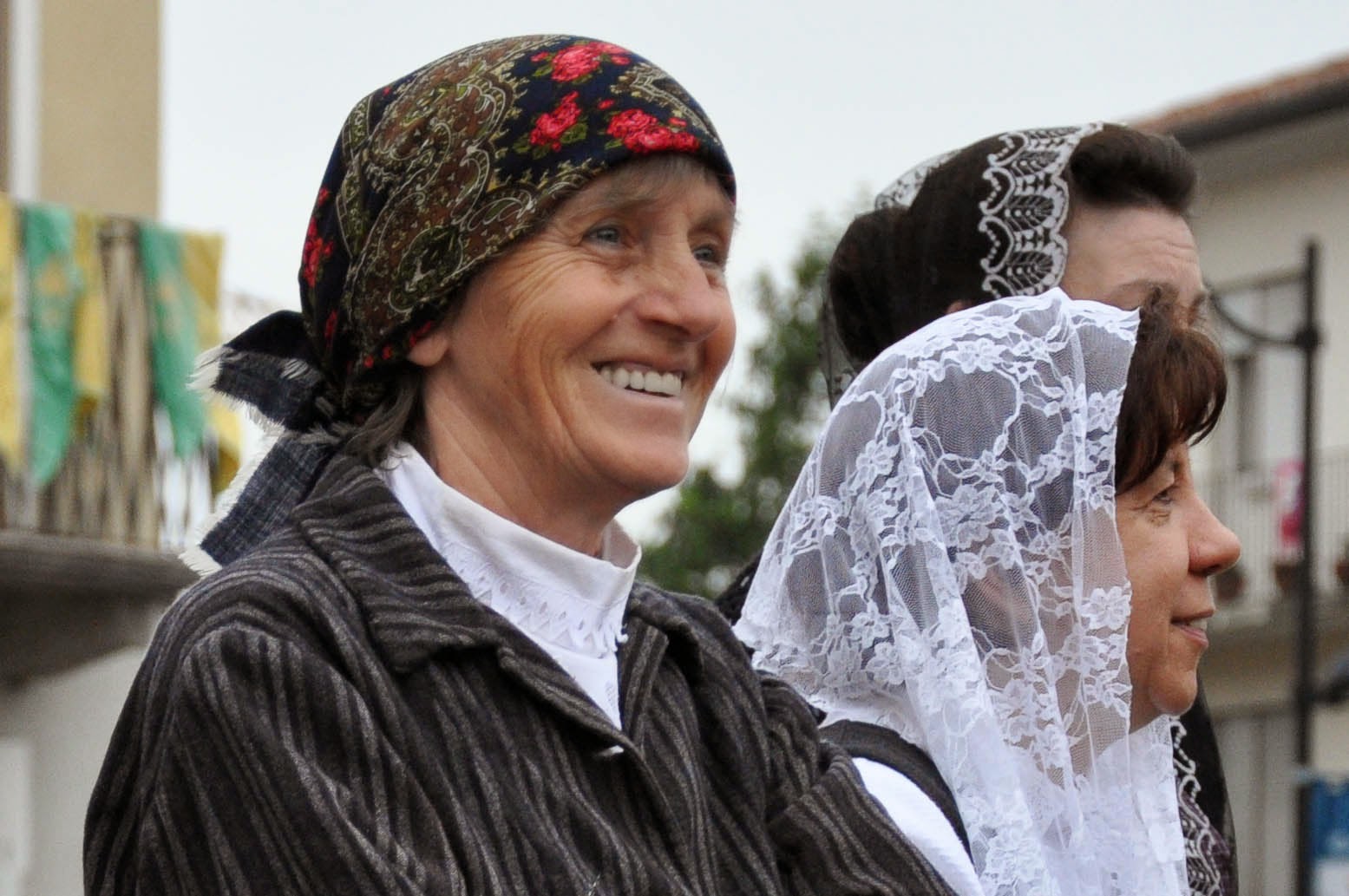 We arrived in Romano d’Ezzelino in the early afternoon. The town was festively decorated with green and yellow banners sporting the image of a donkey.
A kind local let us park on his verdant lawn at the foot of Monte Grappa and as soon as we stepped outside we could feel that mountain moisture which smells of grass and herbs and makes you breathe in the air in large gulps.
We headed down the street to the roundabout where, we were told, the parade was to take place.
The local people were already there, patiently waiting for the kick-off. 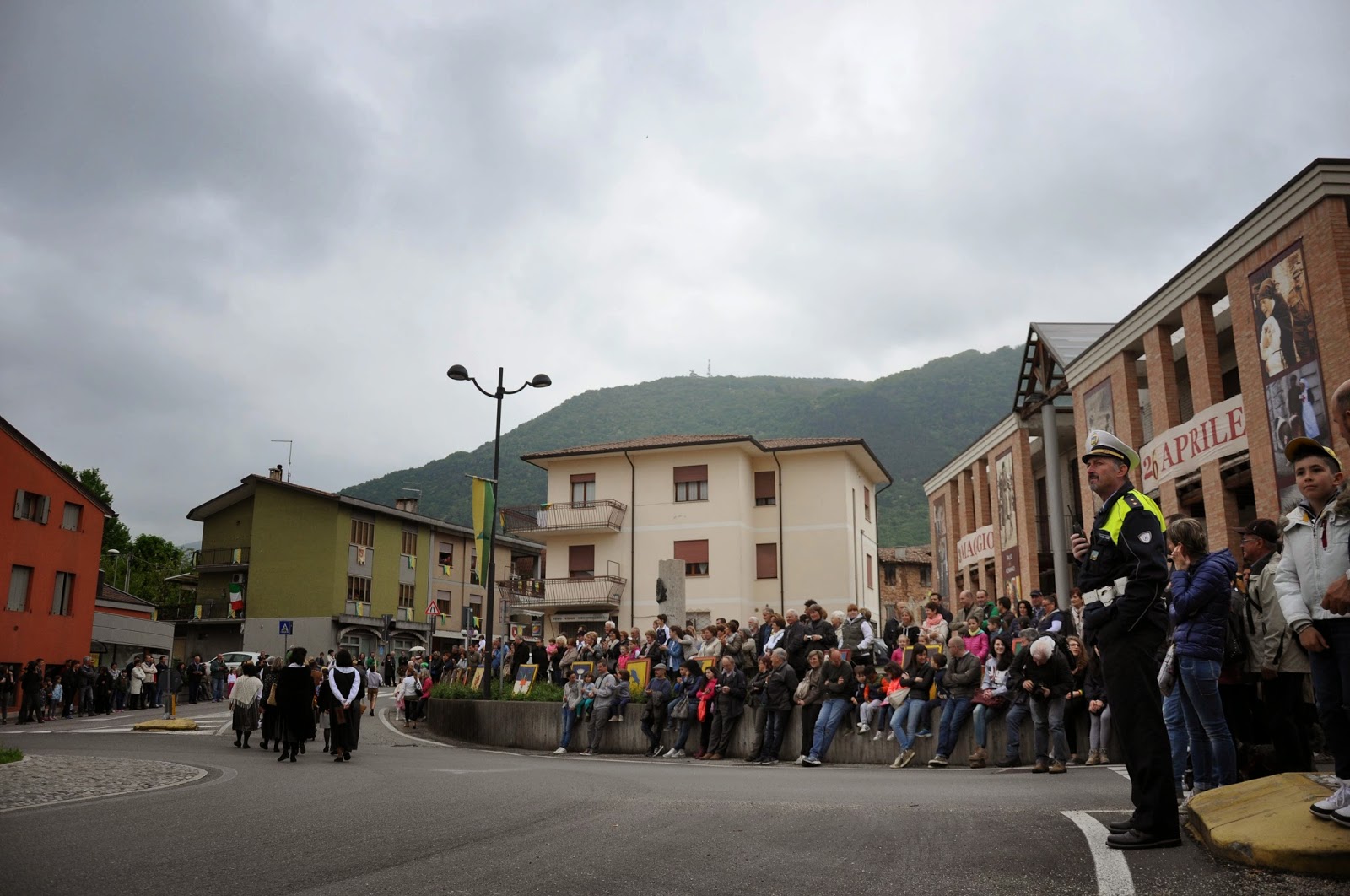 Almost bang on time the parade began.
Each of the town’s quarters was represented by a different thematic group at the head of which walked a standard-bearer proclaiming its name. 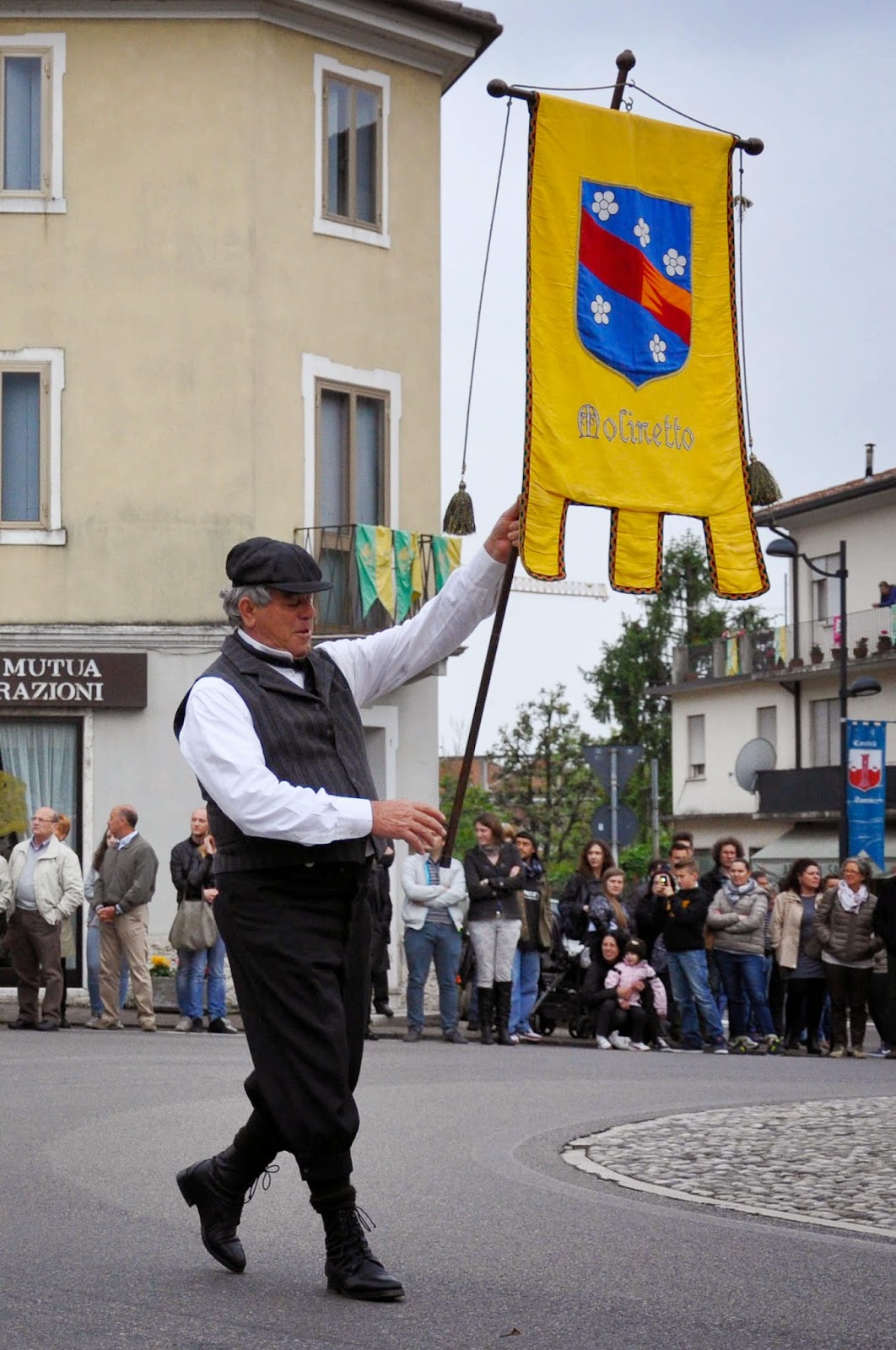 Both local history and customs were explored. There were archers and knights, craftsmen and farmers, soldiers and churchmen, to name but a few.
There was also a wedding cart. 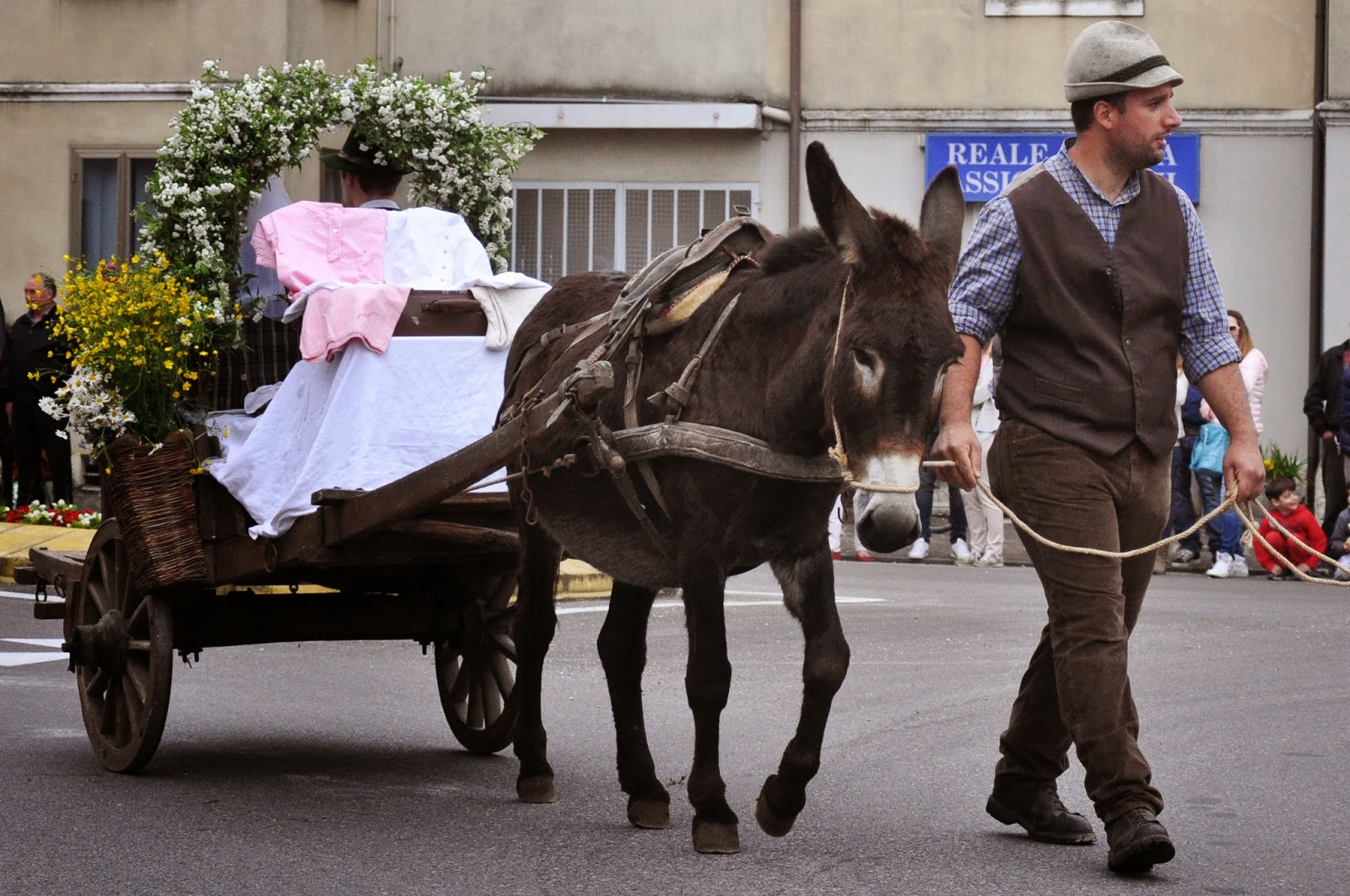 With the happy couple sitting at the back. 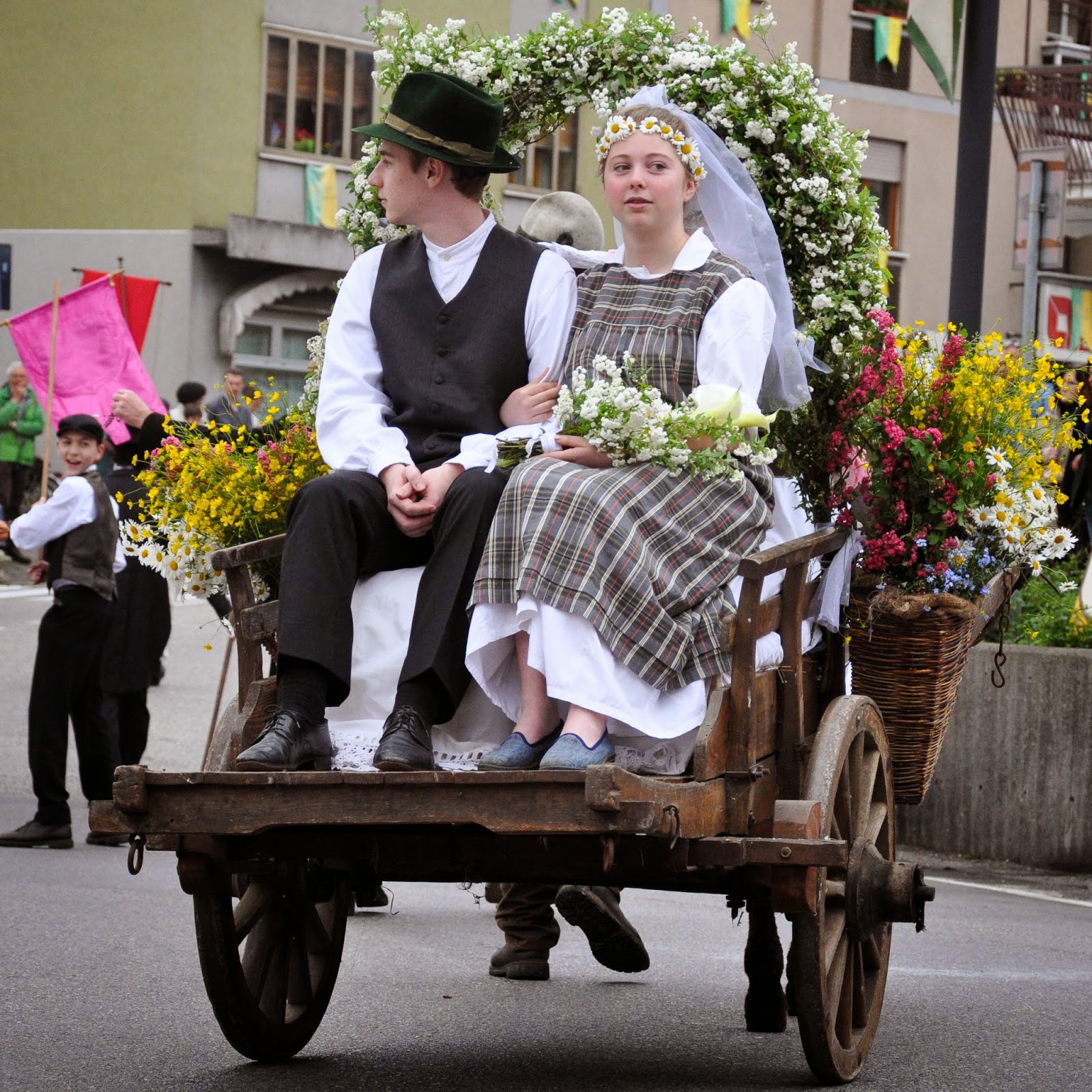 Followed by the wedding party carrying pots, pans and other household staples in their hands as gifts. 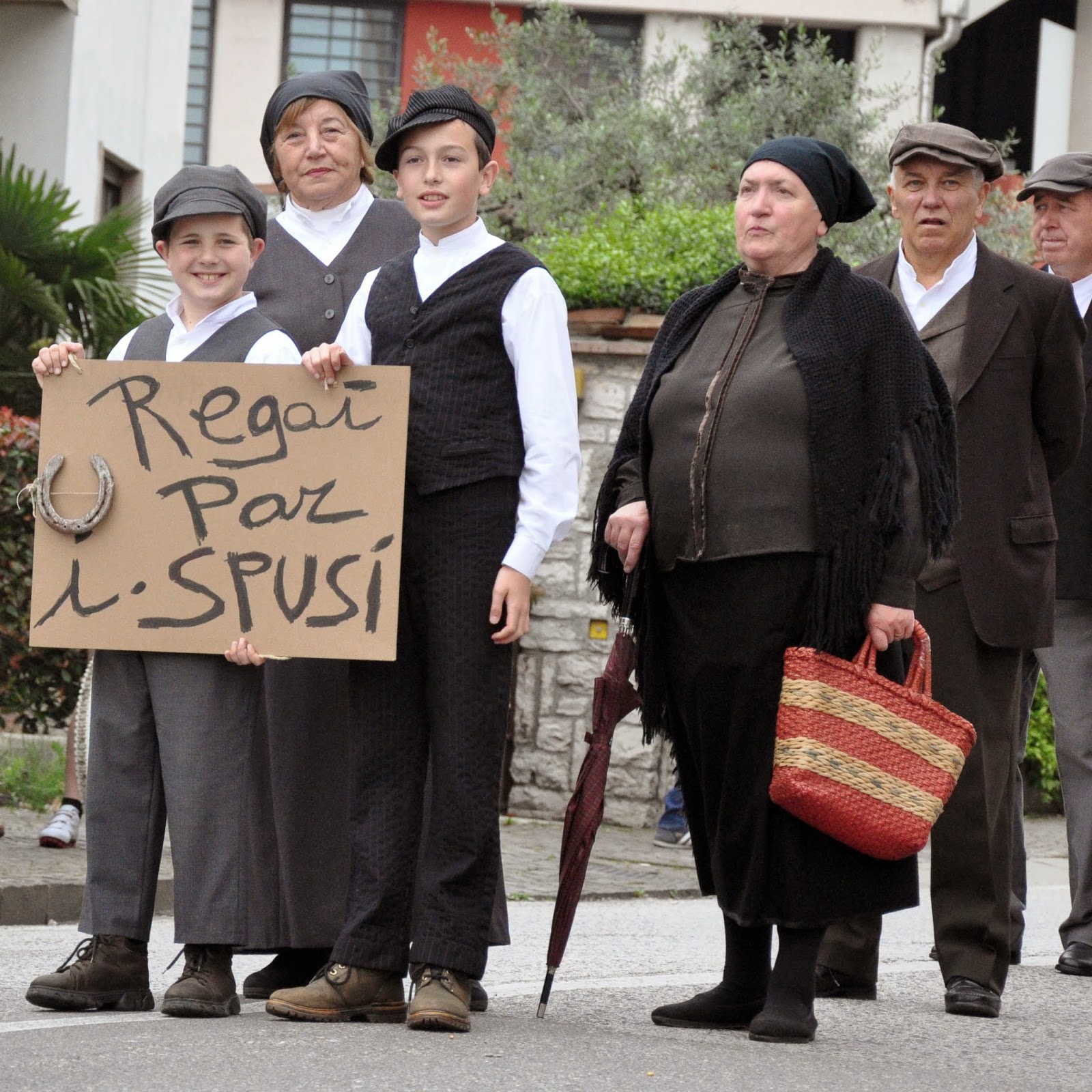 There was a gentleman. 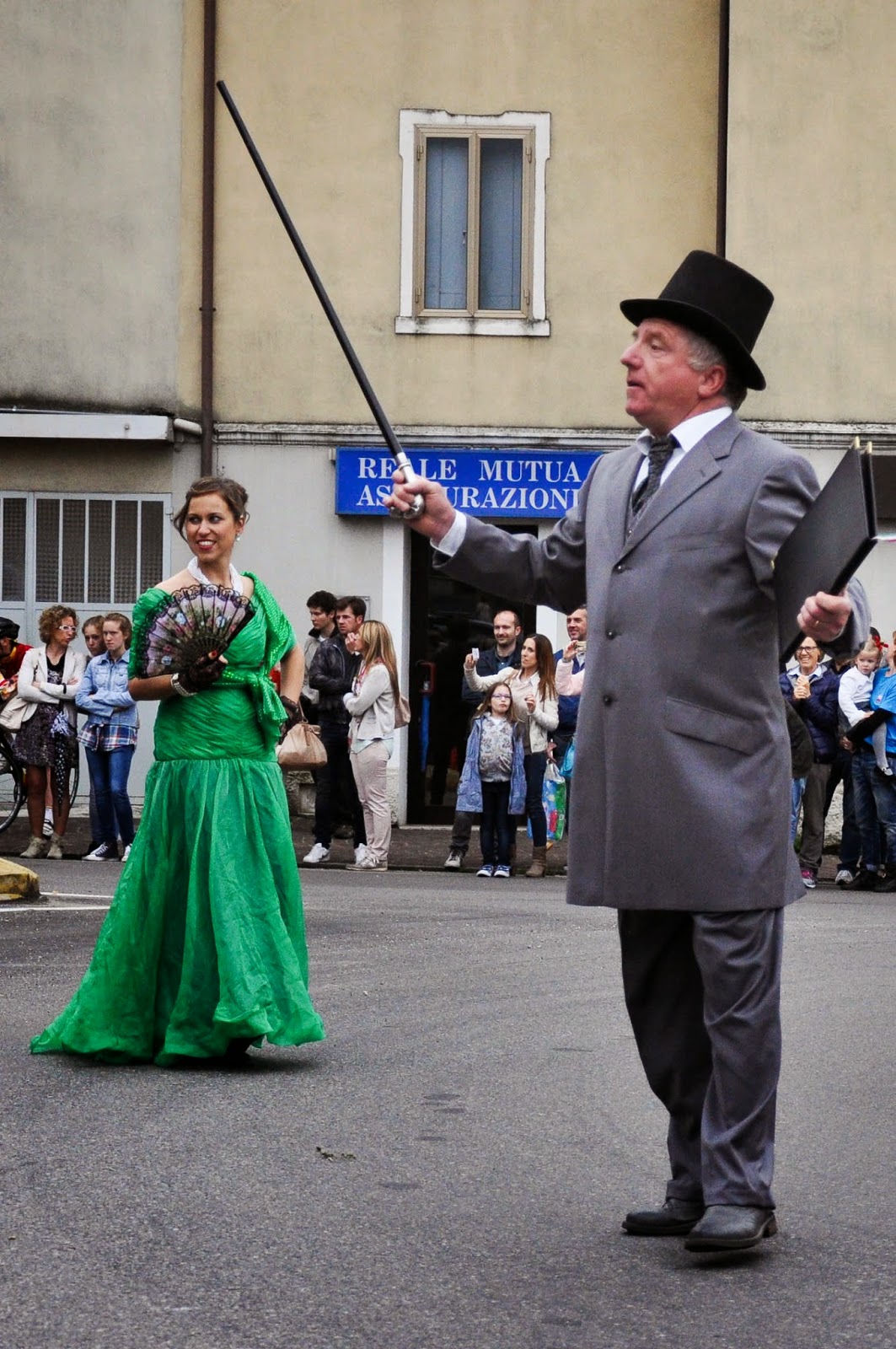 And a soldier surrounded by ladies of, ahem, ill repute… 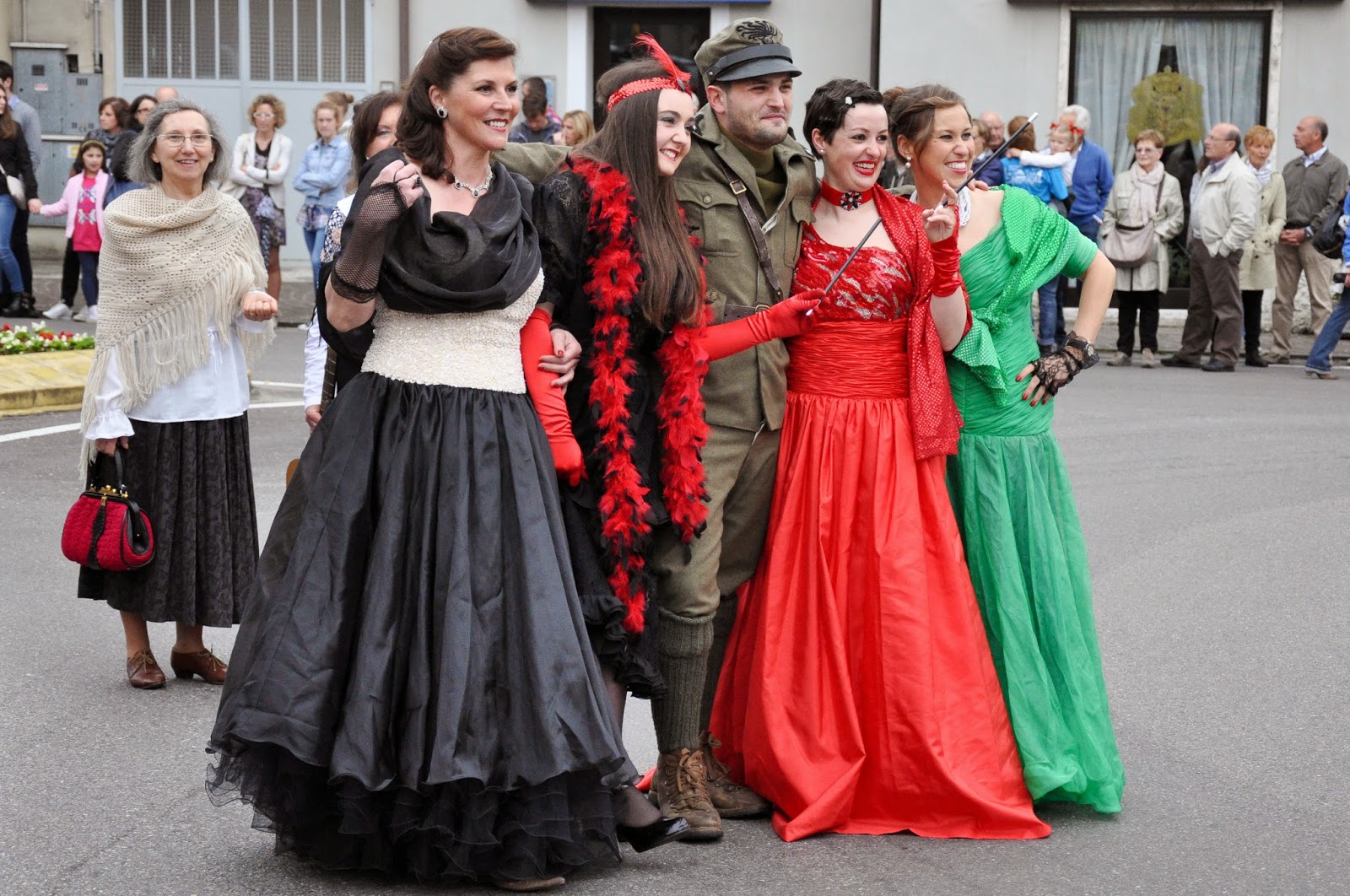 There was a baker, giving out cookies. Obviously, I was too busy picking a cookie from his beautifully arranged tray to manage to take a picture. And there were sausage makers whom I didn’t miss. 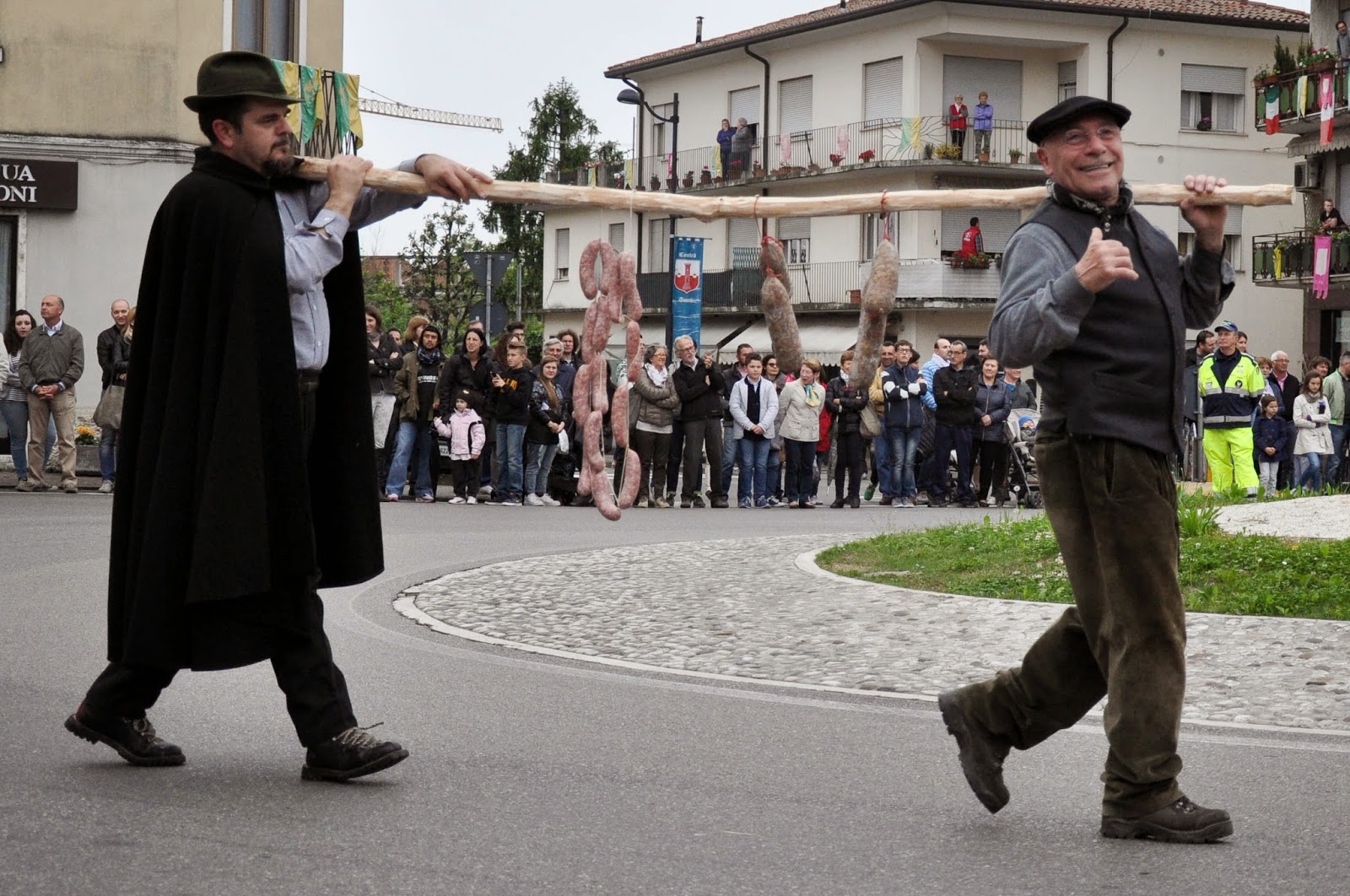 People were smiling and laughing, both the audience and the participants in the parade were exchanging jokes which we, as outsiders, couldn’t quite grasp.
Kids loved being part of the parade, too. Dressed in their outfits from bygone times they laughed, sang and made quite some noise with their old-fashioned rattles.
Amid all the racket, one little star remained fast asleep in her cute vintage pushchair. 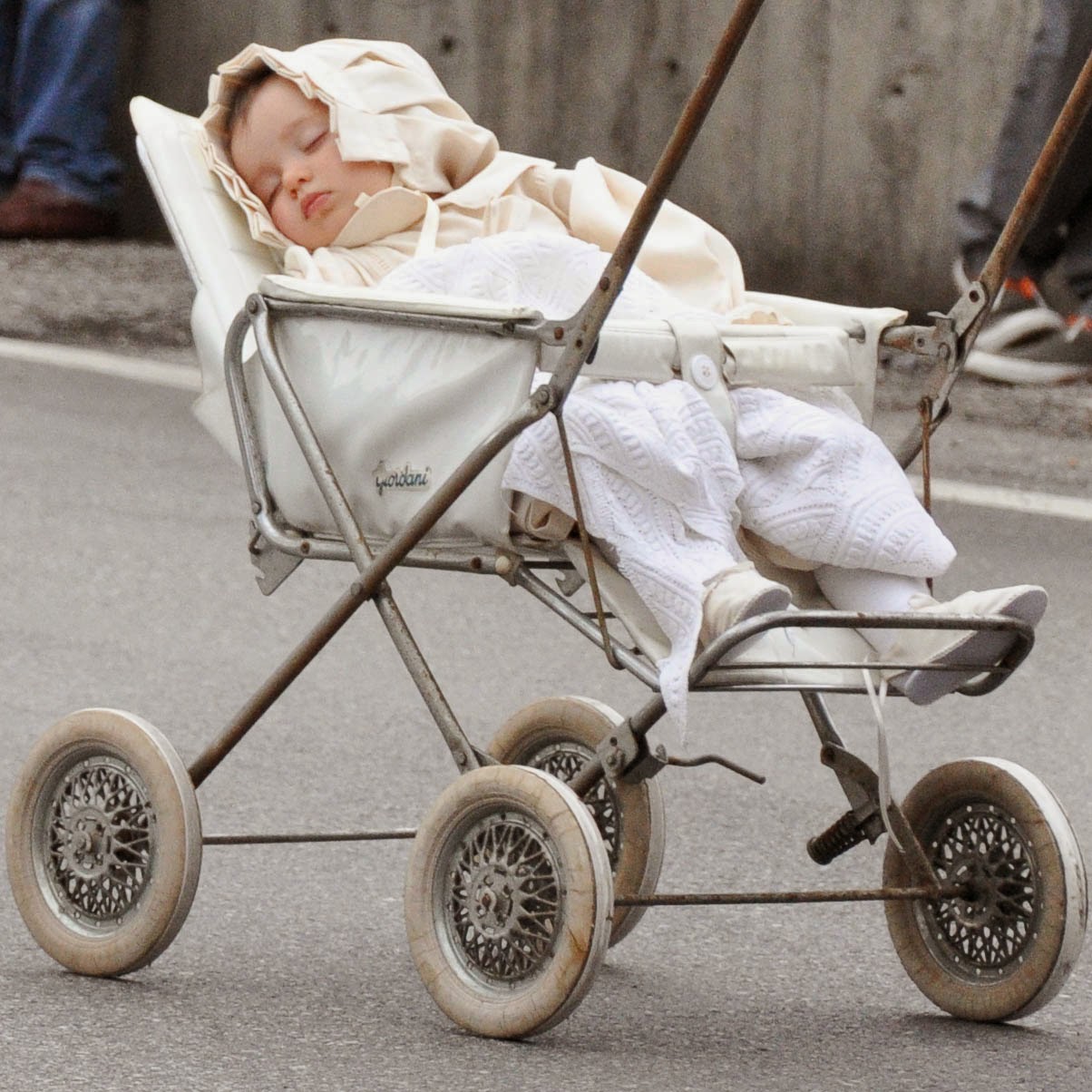 There were several animals taking part, too (apart from donkeys, you understand).
Dogs… 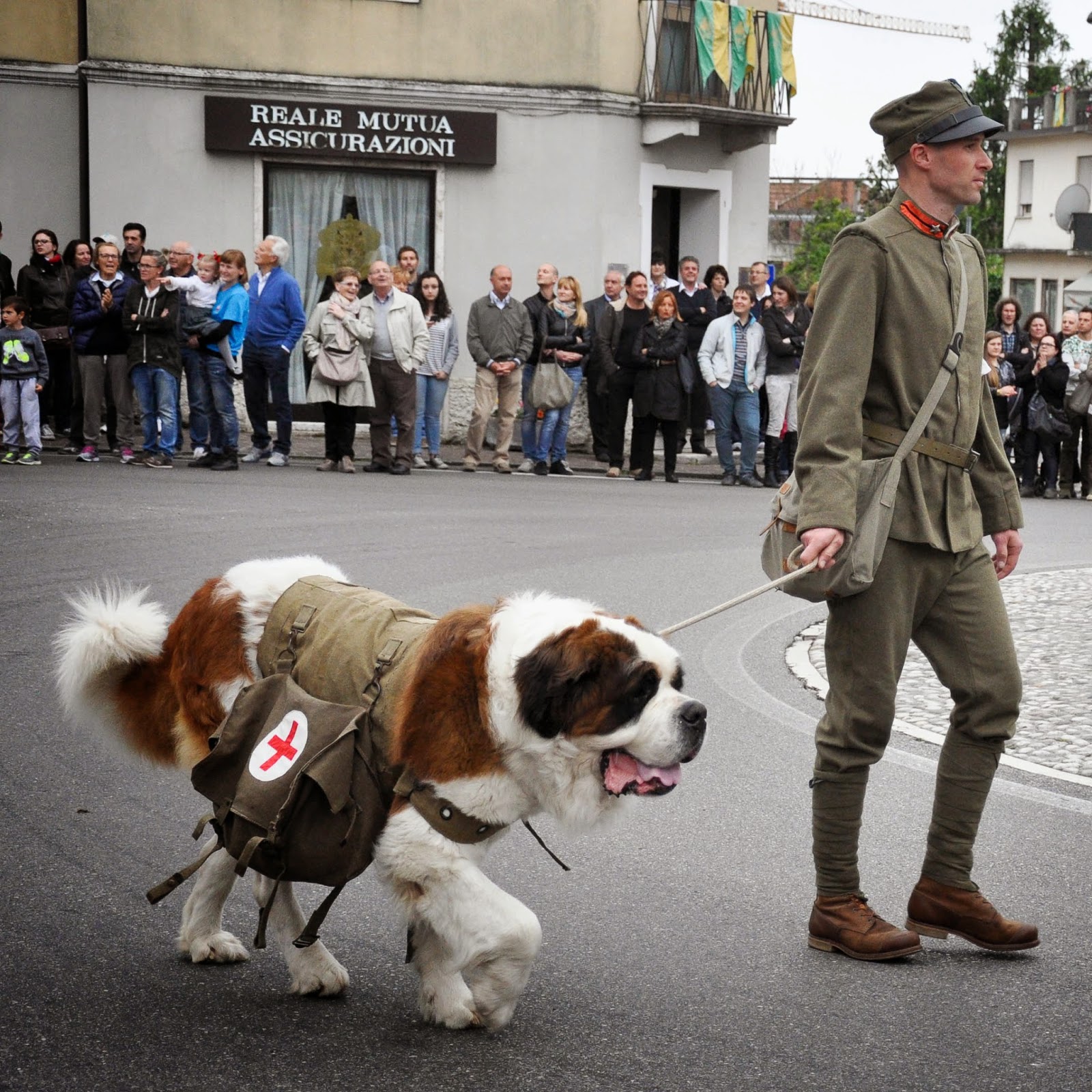 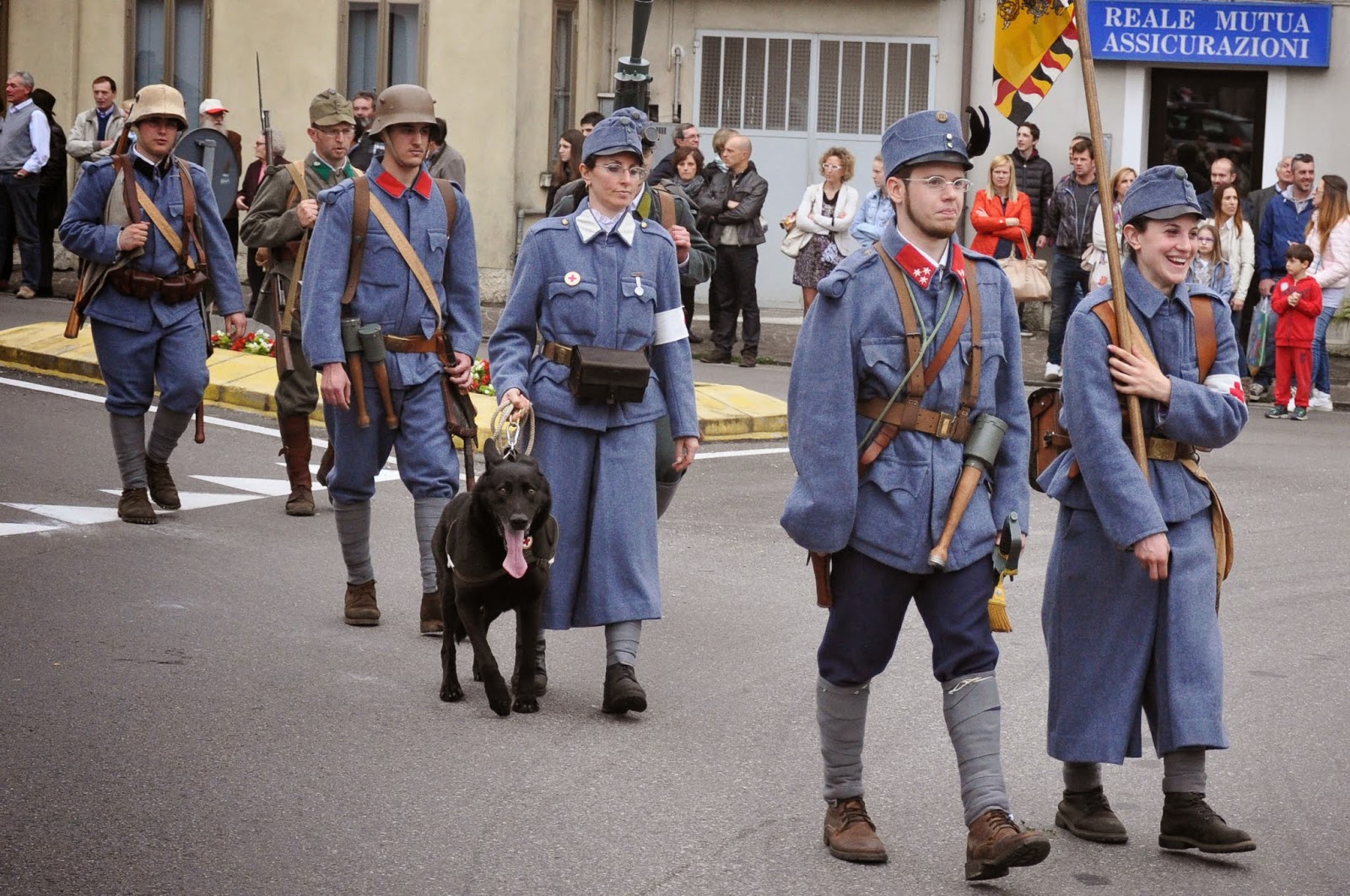 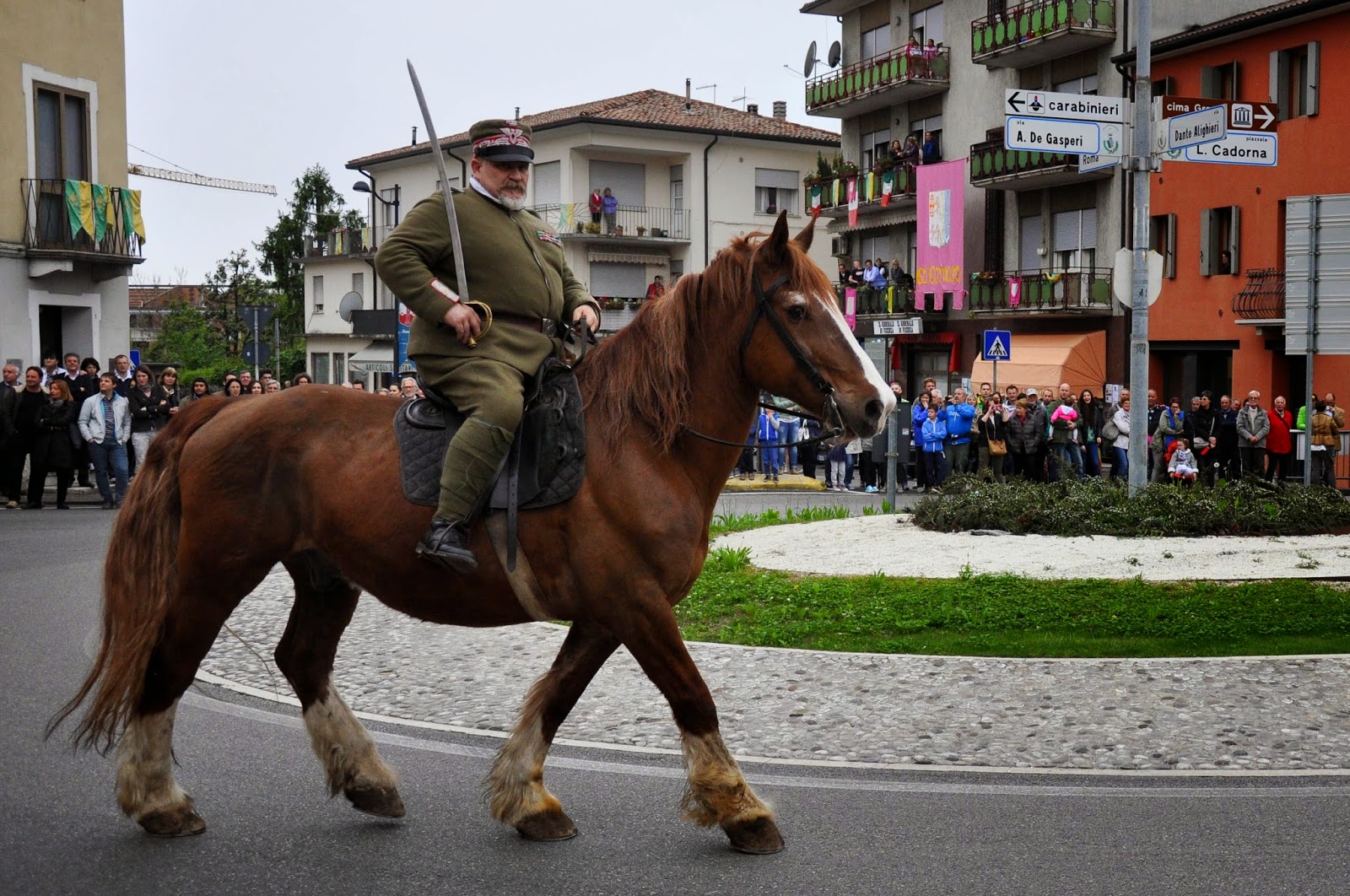 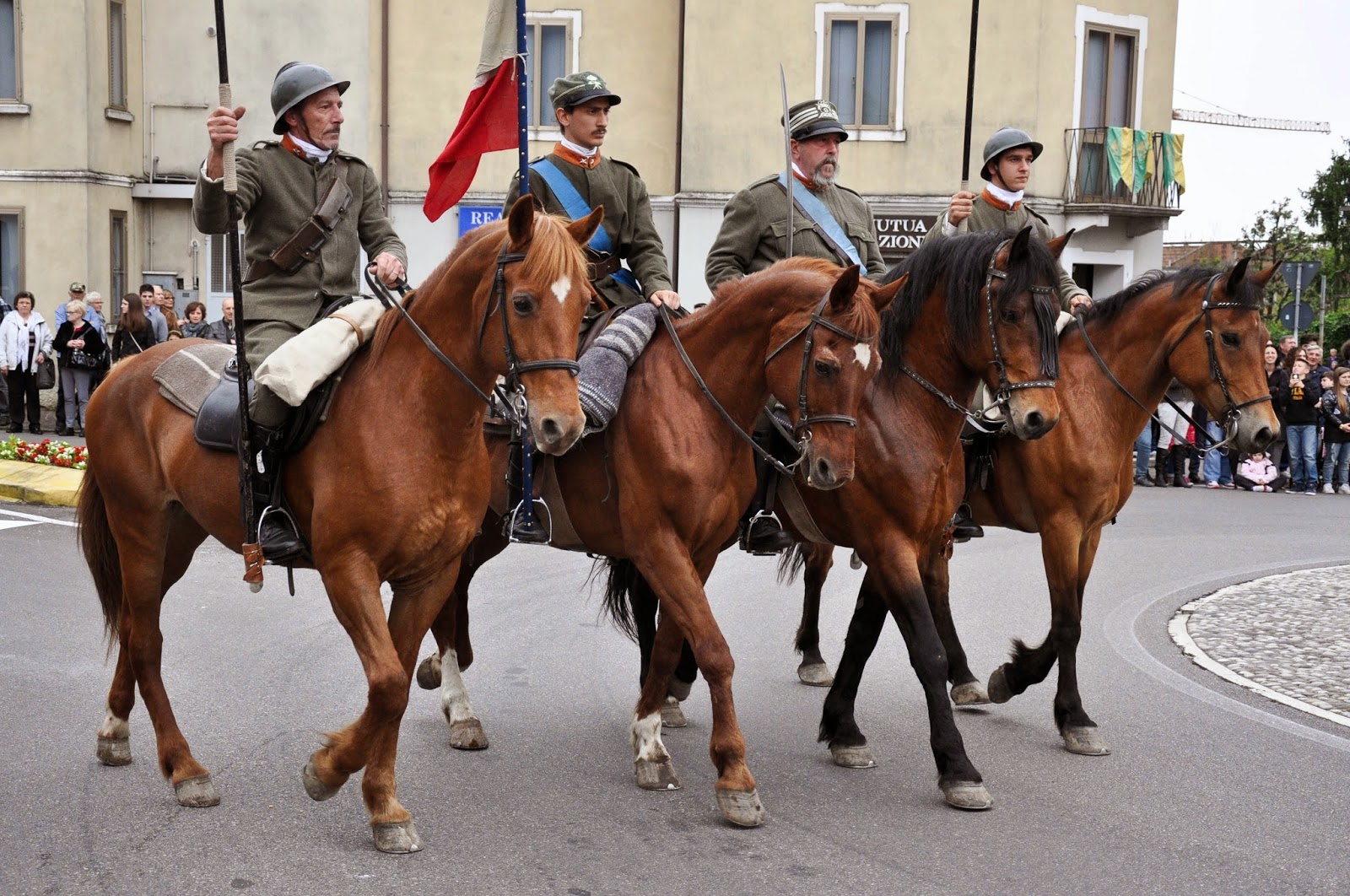 And I was particularly taken with this pair of bulls. 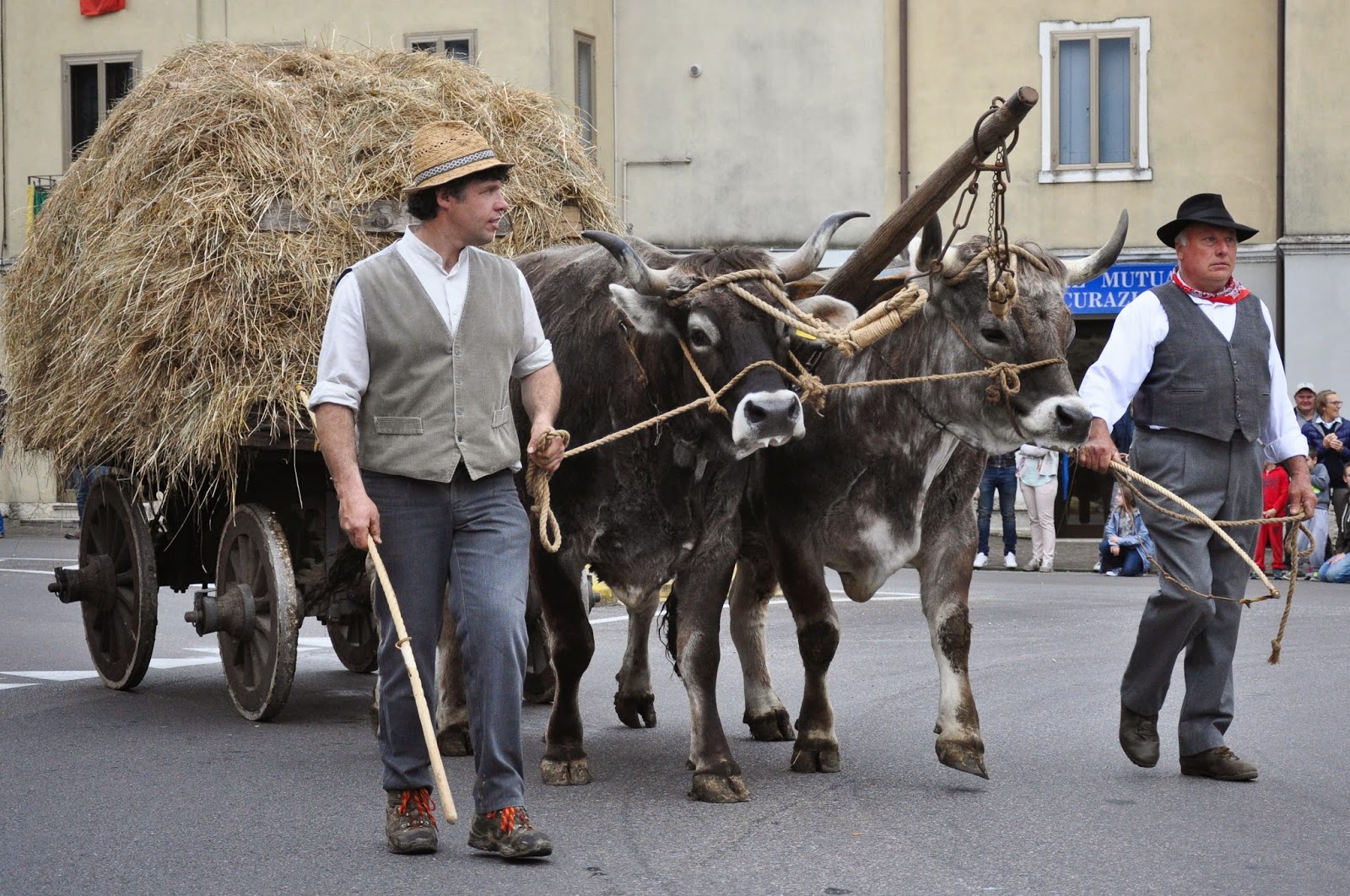 As for this fabulous rooster… Yes, he was balancing on that rake for the duration of the parade. I felt a bit sorry for him, to be honest, as he was attached to it with a thin rope. Afterwards, his proud owner let us pet the rooster for a while and he praised him for being very docile, which he was, so I am hoping he was comfortable and happy on that rake. 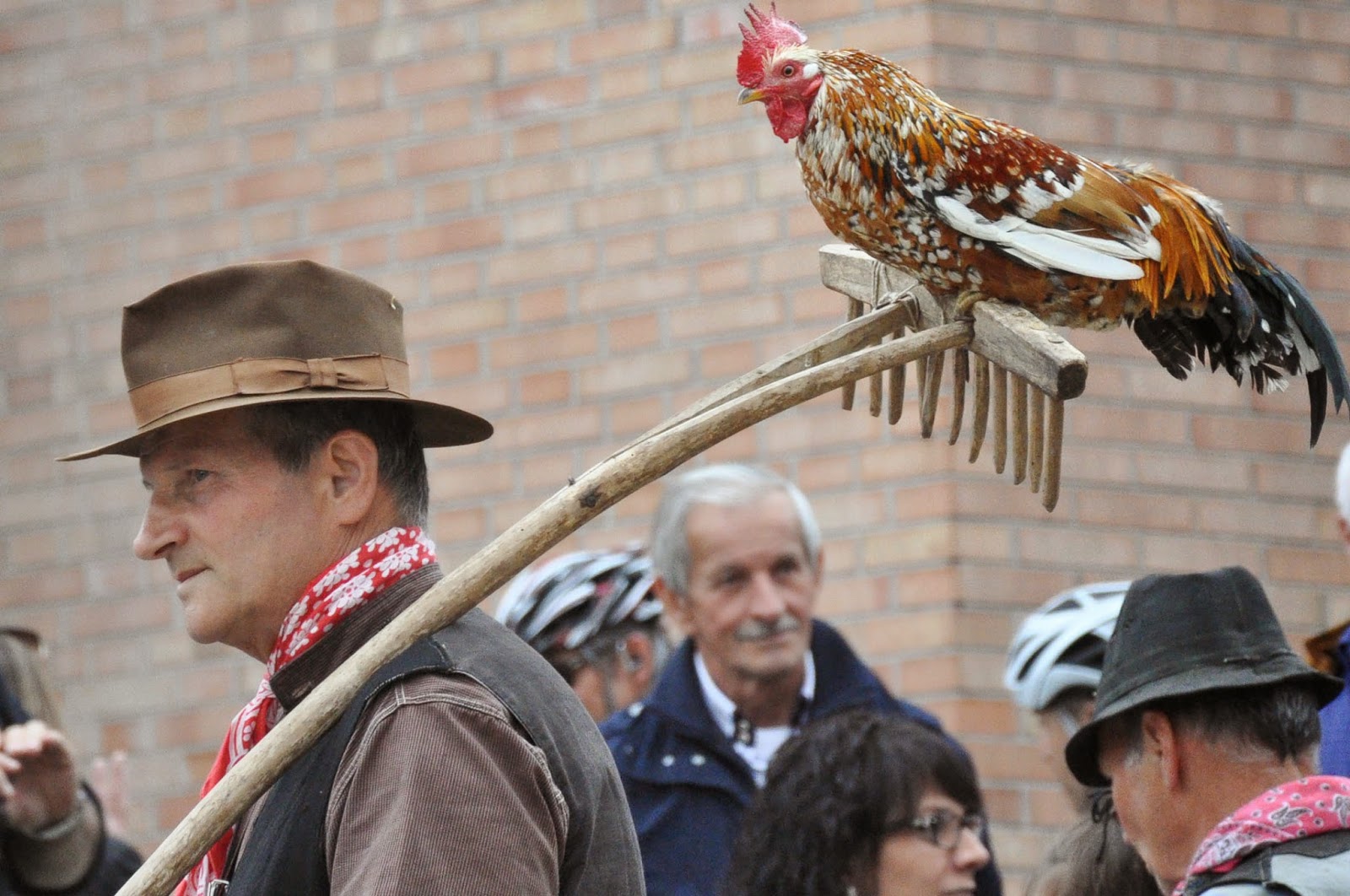 Right towards the end of the parade, all of a sudden large groups of spectators started to quickly withdraw. They knew something that we didn’t so, curious to find out what was going on, we followed them, too.
After a brisk walk down the road, we reached a small stadium, already chock-full with people and surrounded by an ever expanding crowd. 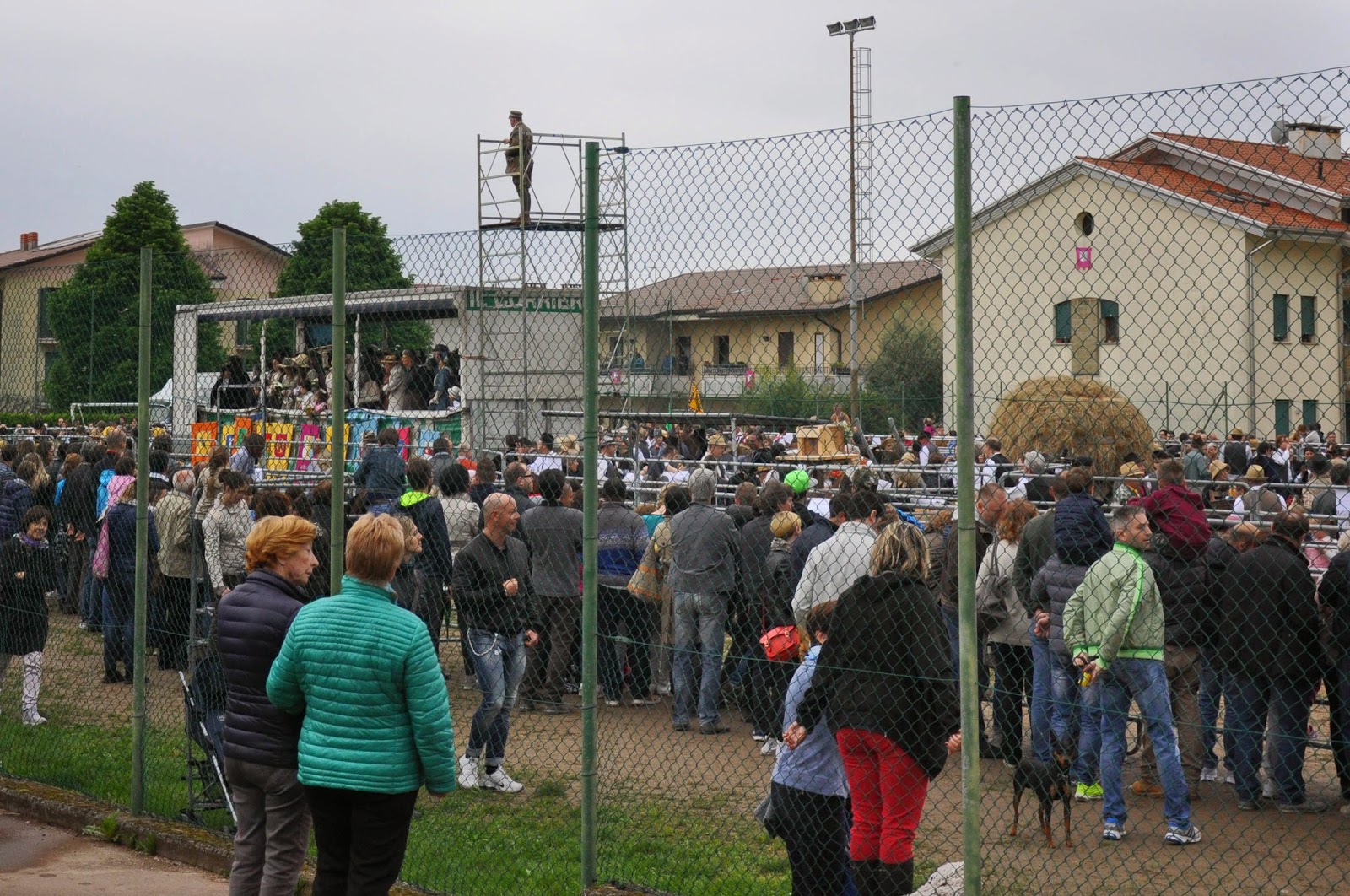 The announcer, dressed in a military uniform, climbed to the top of the metal structure and welcomed us to the ‘Mussodromo‘ – from ‘musso‘ (donkey in Italian) and ‘hippodrome’. Get it?! I thought it was a rather good term.
We were about to witness the donkey race.
After some toing and froing, the names of the donkeys and their riders were announced. 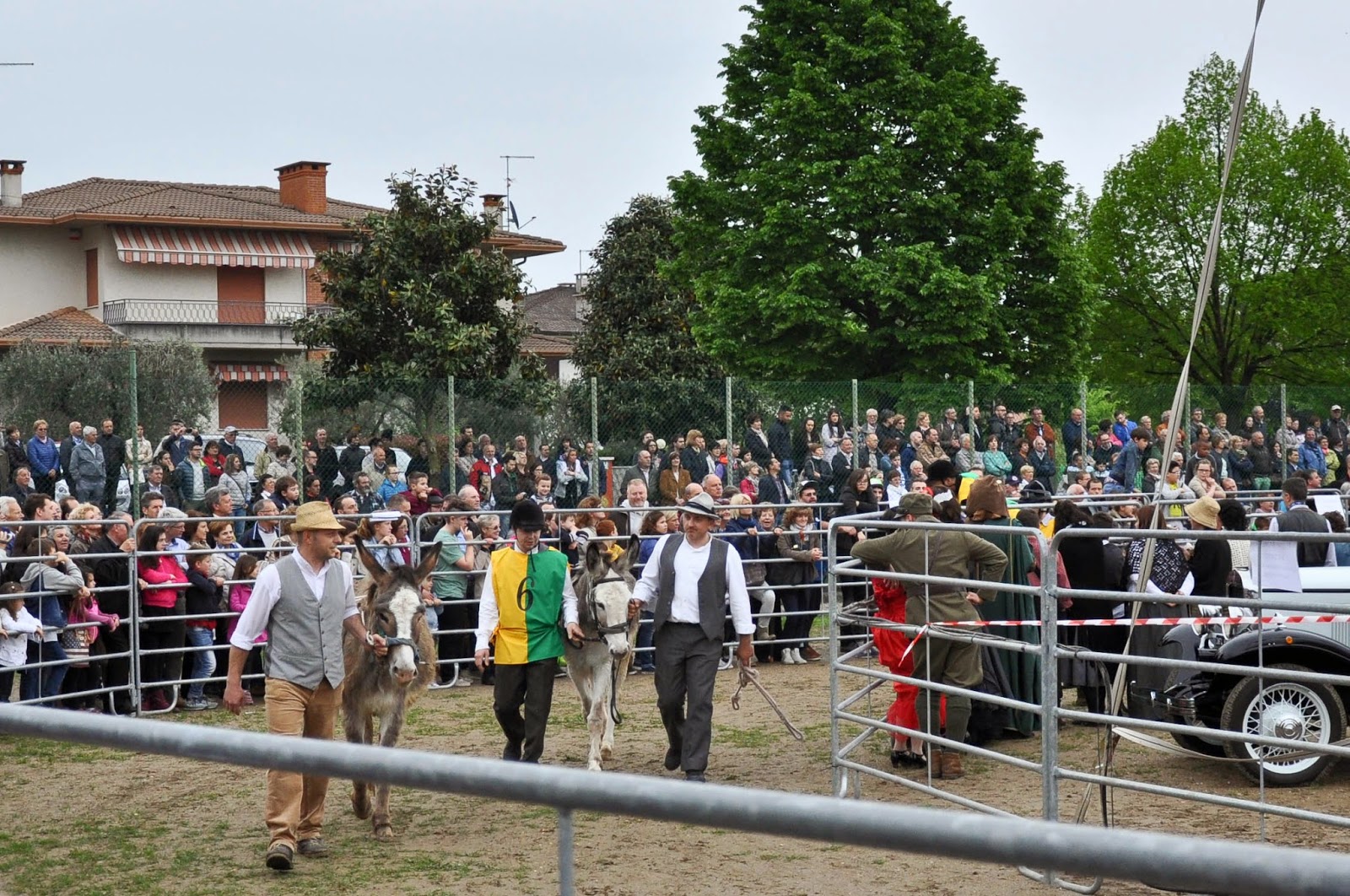 The crowd welcomed them all. And then it was ‘ready, steady, go’ and the donkeys flew round the course. 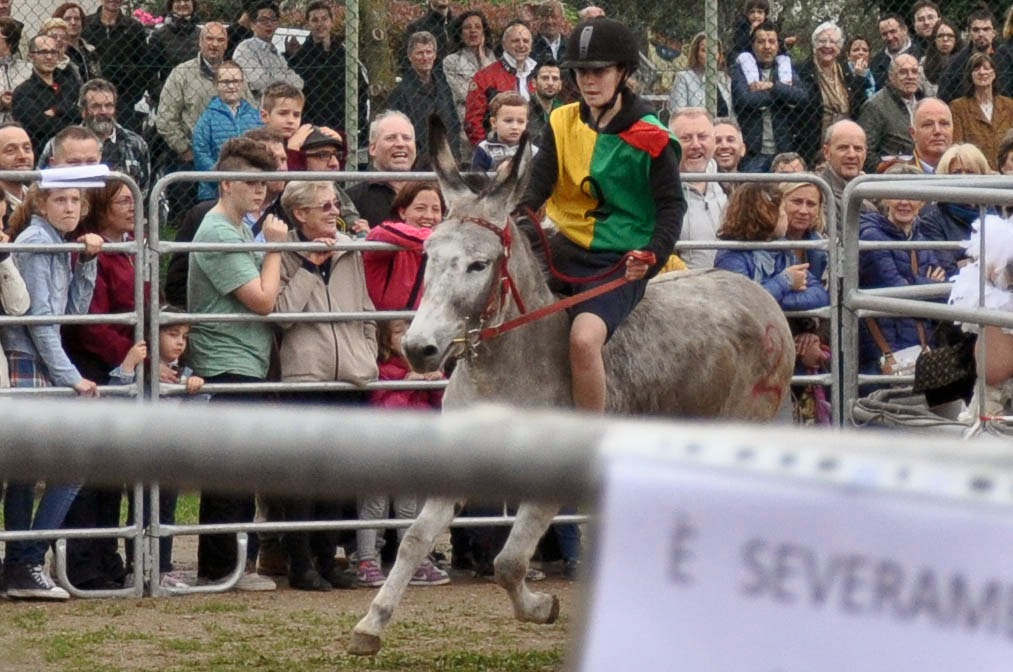 The atmosphere was electric!
Everyone wanted to see the donkeys and cheer them on. There was lots of shouting, laughing and clapping. People were craning their necks, trying to catch a glimpse. 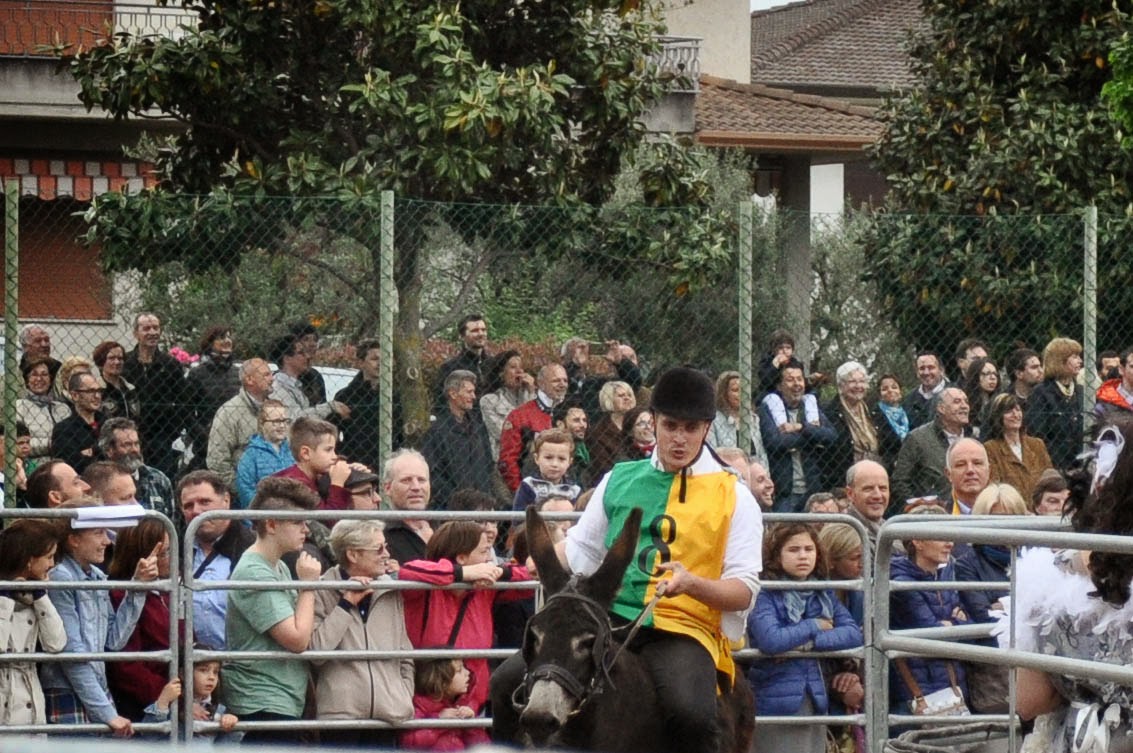 Five rounds later it was all done and the donkeys crossed the finishing line.
Once again the crowd quickly dispersed and streams of people trickled back up the street straight to the marquees with food and drink.
It was a great day! I loved the opportunity to be at such an authentic event where the locals were enjoying themselves and, apart from us, there were no tourists in sight.
Back in our little red car and just before we started on the 45-minute return journey to Vicenza, I thought that this was another Italian adventure I would cherish for years to come.
* ‘Higher, higher!’ in Italian.
Share
Tweet4
Pin
WhatsApp
Email
Share
Reddit
4 Shares
Click here to cancel reply.