Skip to Content
Thank you for stopping by! This blog post reflects my first-hand experience. It may contain affiliate links and if you click and make a purchase through them, I may receive a small commission at no cost to you. The ads on this page help me keep this blog free and produce new travel content for you to enjoy. Full details in my Disclosure.
55 shares

It is very easy to get in touch with Italy’s past. You don’t even need to go to a museum! It is everywhere. As soon as you step out into any Italian village or town, you are surrounded by centuries-old buildings – from mighty Roman aqueducts through palatial Gothic dwellings down to proud medieval castles. Even the cobbles lining up the narrow curving streets can easily be older than some countries, like… (quite ironically, indeed) the Republic of Italy itself, which only came to be in 1861.

The amazing thing about Italy’s past though is that it is not confined to just inanimate objects and real estate. As I came to realise, it is still pretty much a living and breathing thing with people dedicating time and resources, often on a completely voluntary basis, to learn about it and even recreate it. 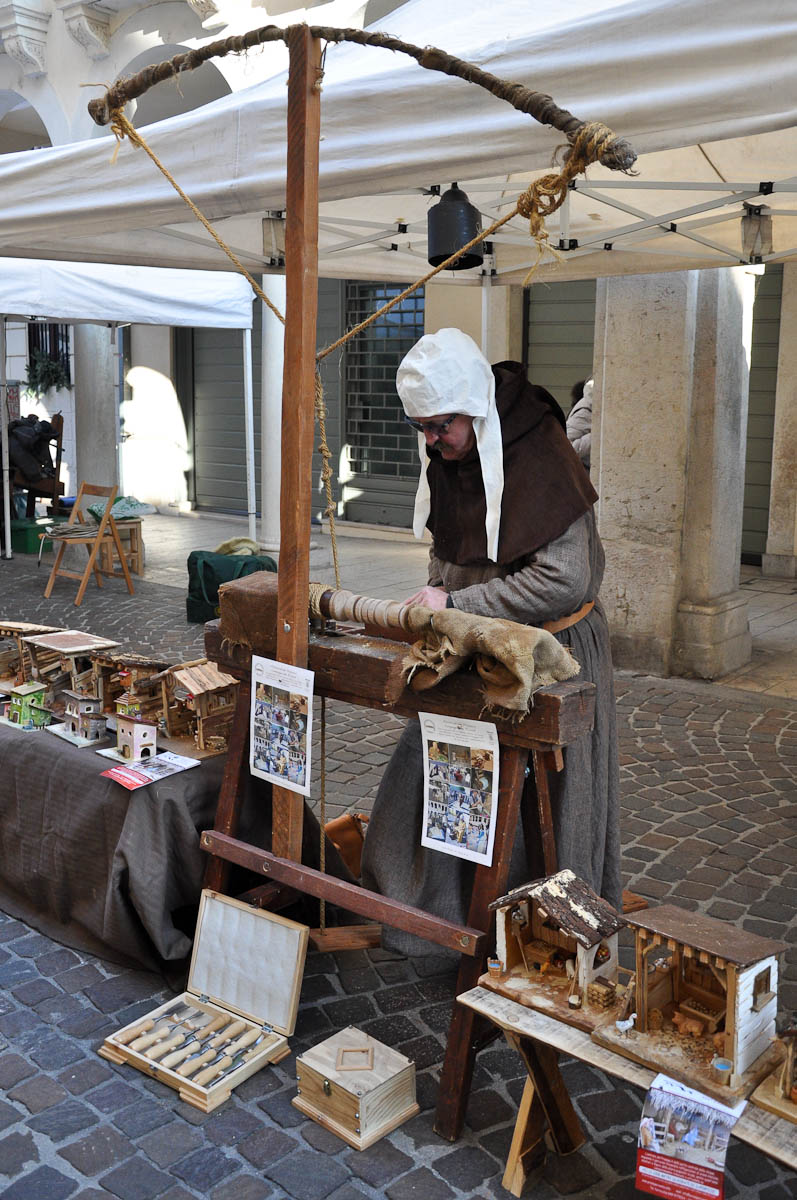 Even the smallest towns here hold yearly fairs and celebrations in honour of a local historical event or personality. And, community groups get together on a regular basis to learn about certain aspects of the past in order to keep them alive in our very modern and technologically advanced times.

Like old Italian crafts, for example. From old-fashioned coin minting to making shoes by hand, groups of people all over the country study ancient techniques, bring back to life archaic tools and then are only too happy to share their knowledge and demonstrate their skills during village and town events where they show the curious public how their predecessors lived and worked. All the while, dressed in period costumes and assuming epoch-suitable identities. 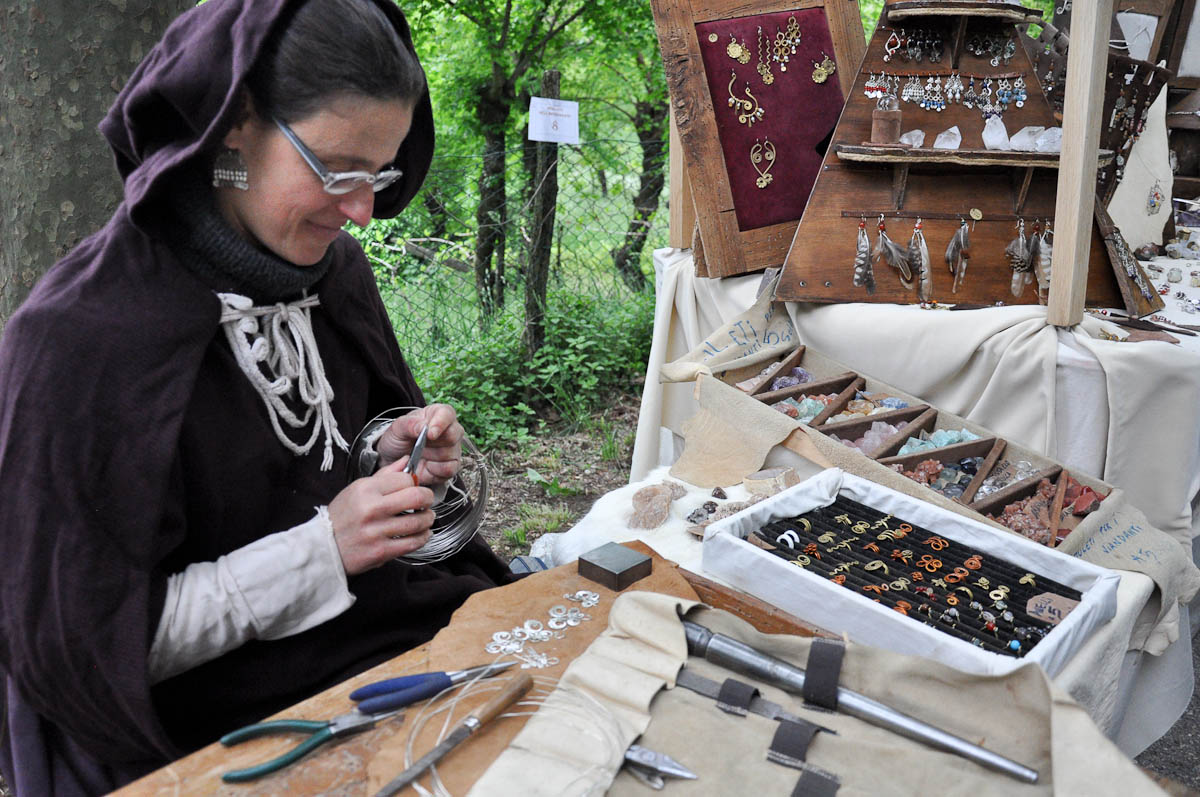 I remember going to my first such event last year. Called locally ‘La Faida‘ it is famous all over the Northern Italian region of Veneto and beyond also as the ‘Romeo and Juliet’s Festival’, as it is held by the ruins of two castles (just above the town of Montecchio Maggiore) which allegedly inspired Luigi da Porto to write the first ever story of the star-crossed lovers (yes, long before Shakespeare did it!). 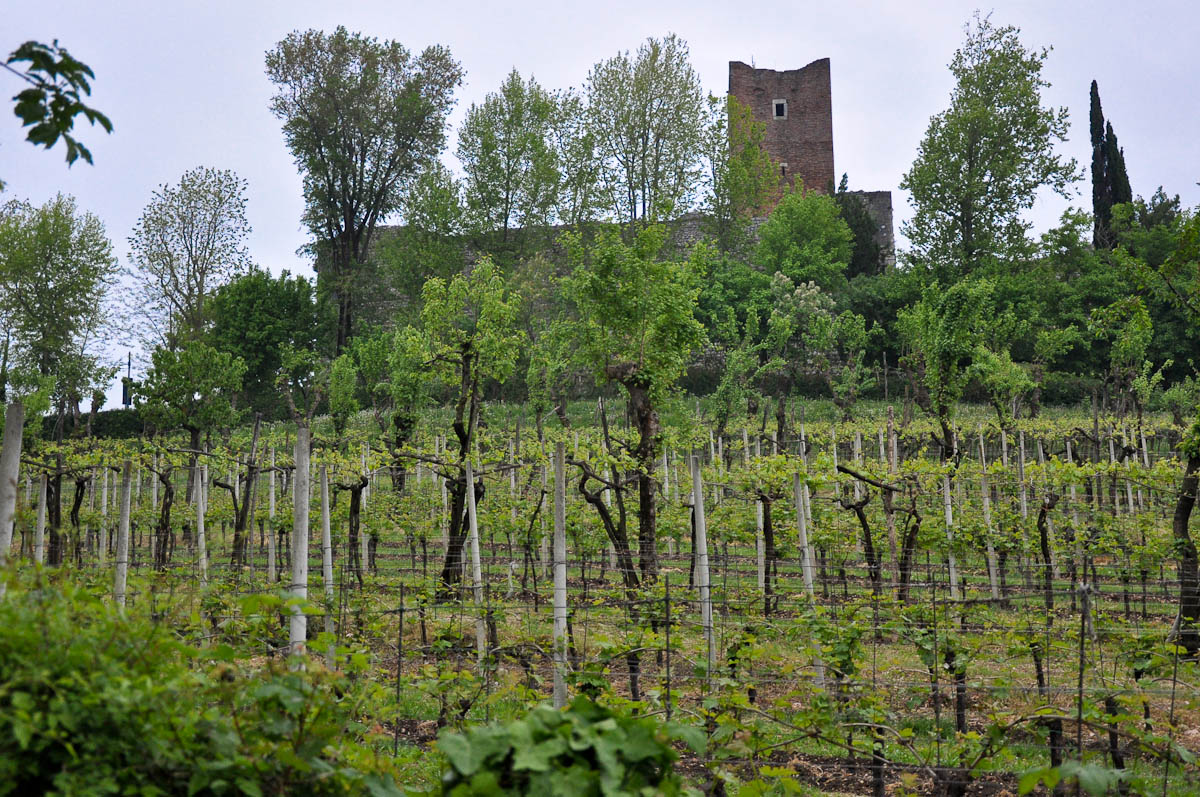 I had heard quite a lot about La Faida prior to my visit and was looking forward to a fabulous experience. I knew that there would be sword fights and birds of prey displays. I knew that thousands of visitors were expected. What I didn’t know though was just how authentic the event would be with its medieval playground, knights and ladies-in-waiting roaming among the crowds and tonsured monks serving drinks in the pop-up eateries which had sprung in the greens between the two castles. 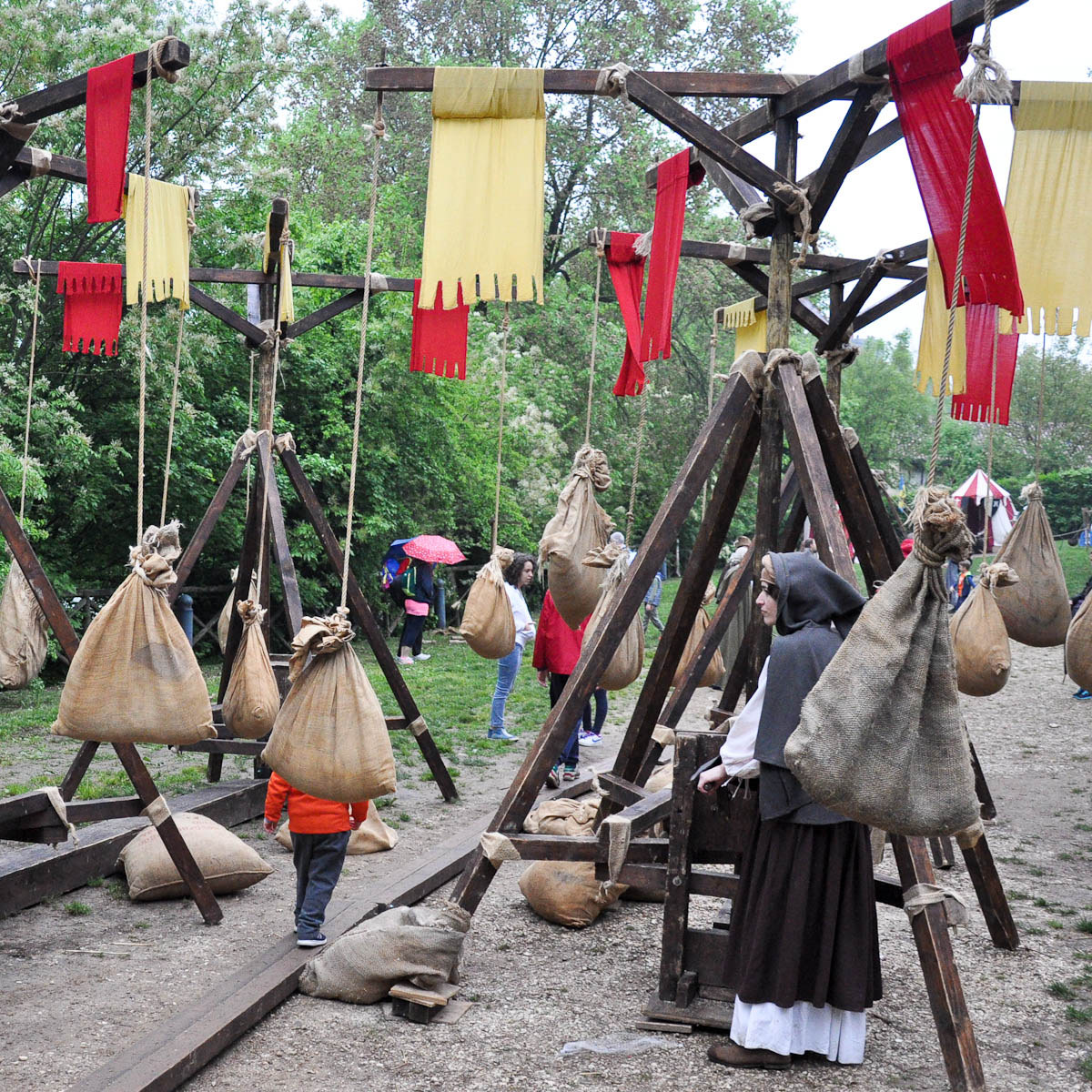 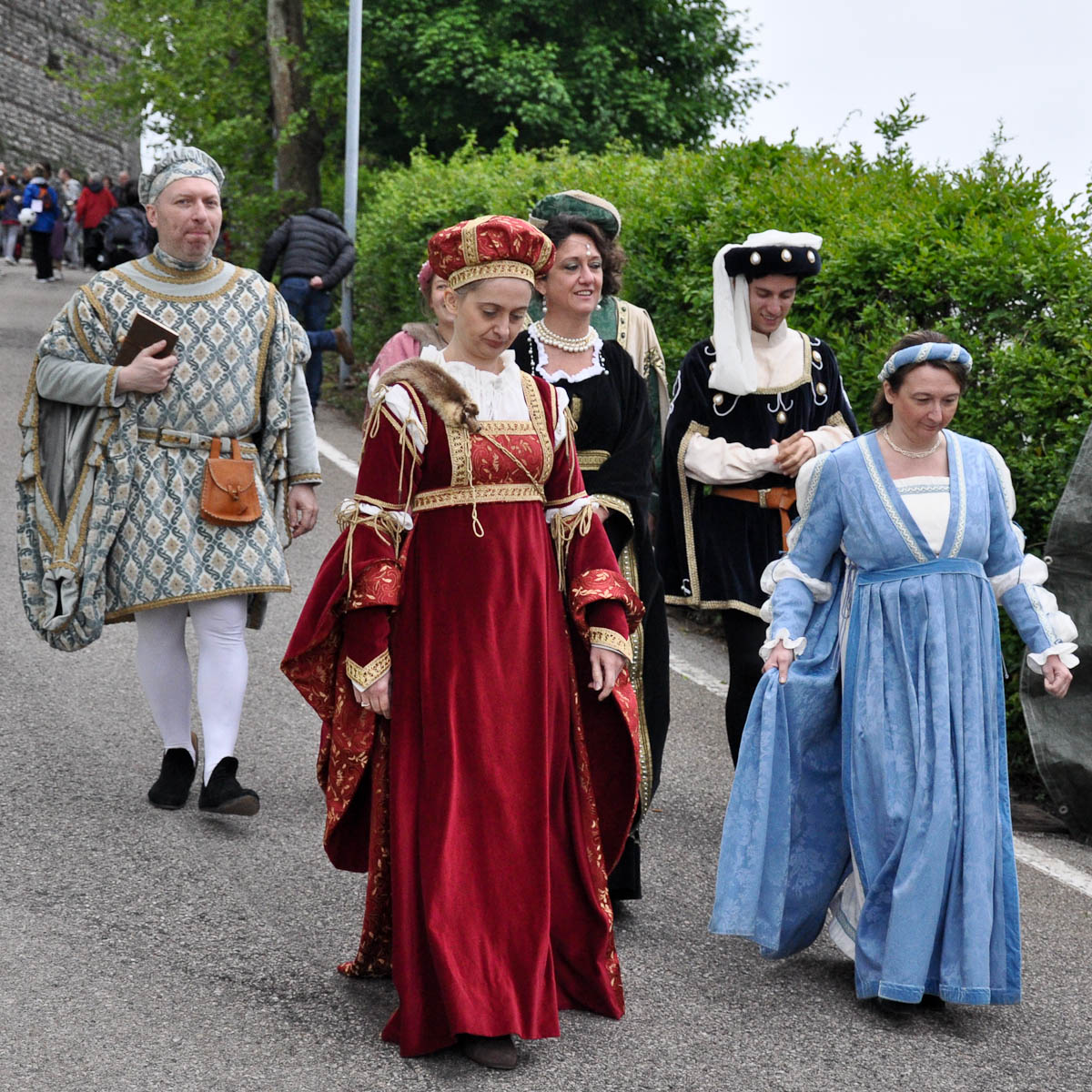 What impressed me the most though were the artisans – each dressed in a medieval costume and using old-fashioned techniques to create wireworked jewellery, embossed copper pans and plant-based yarn among many wonderful things. 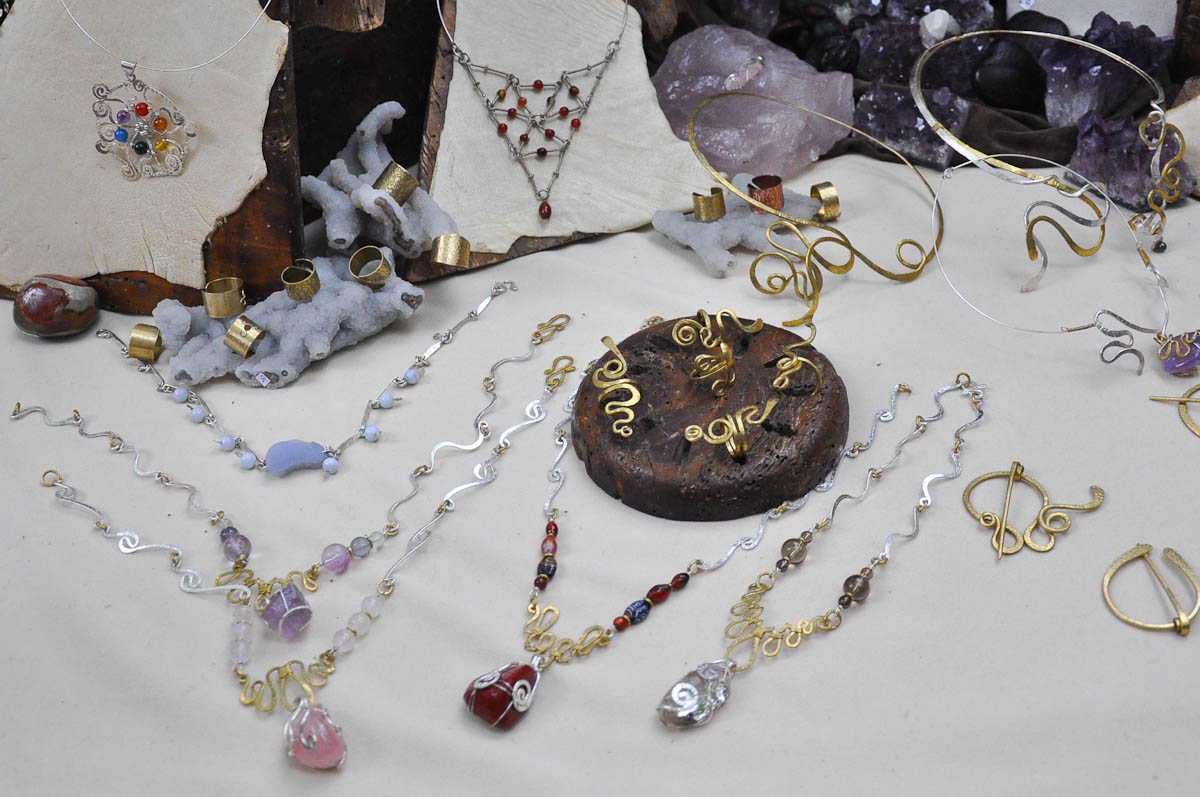 There was also a medieval bakery with a stone mill… 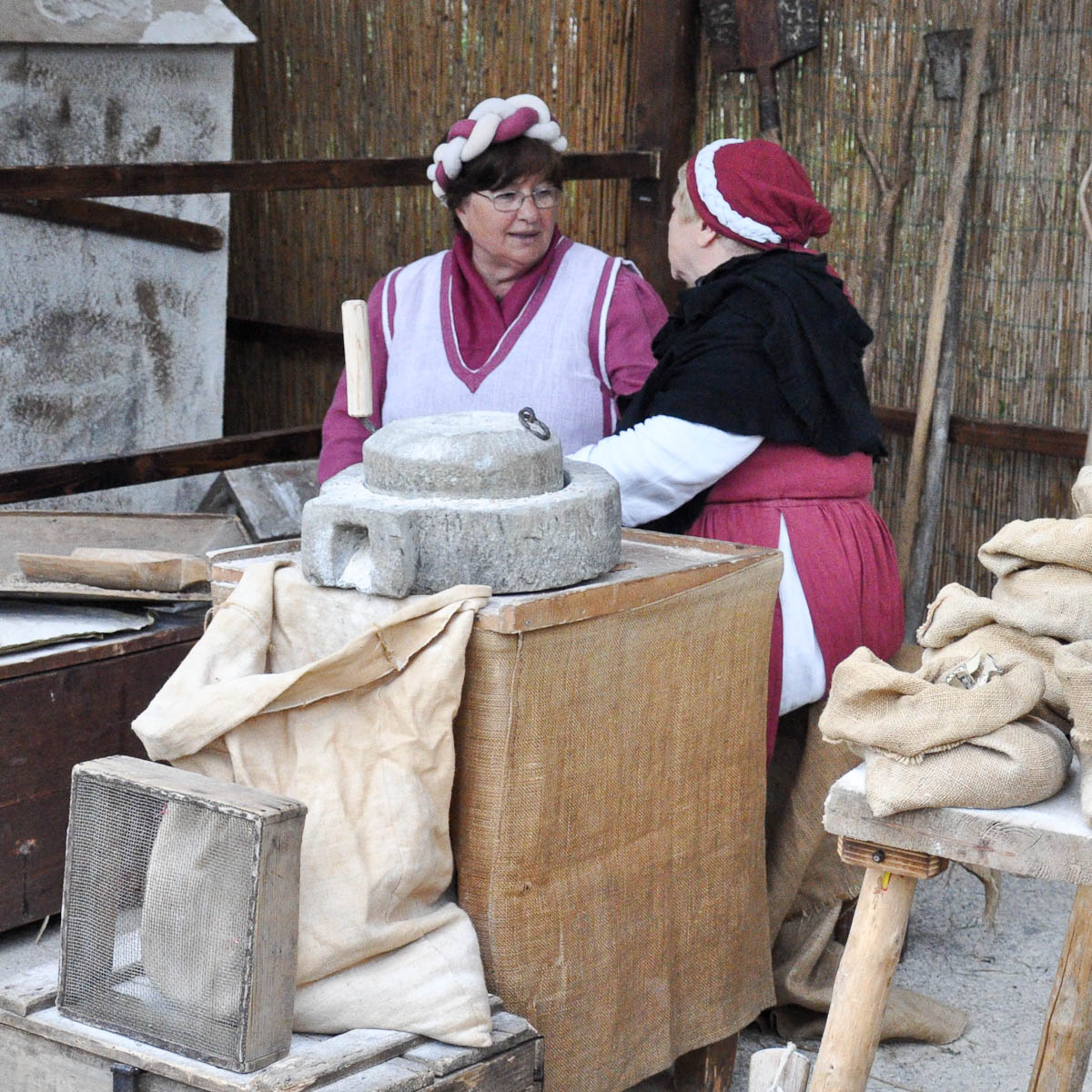 a florist aptly making crowns of greens and blooms… 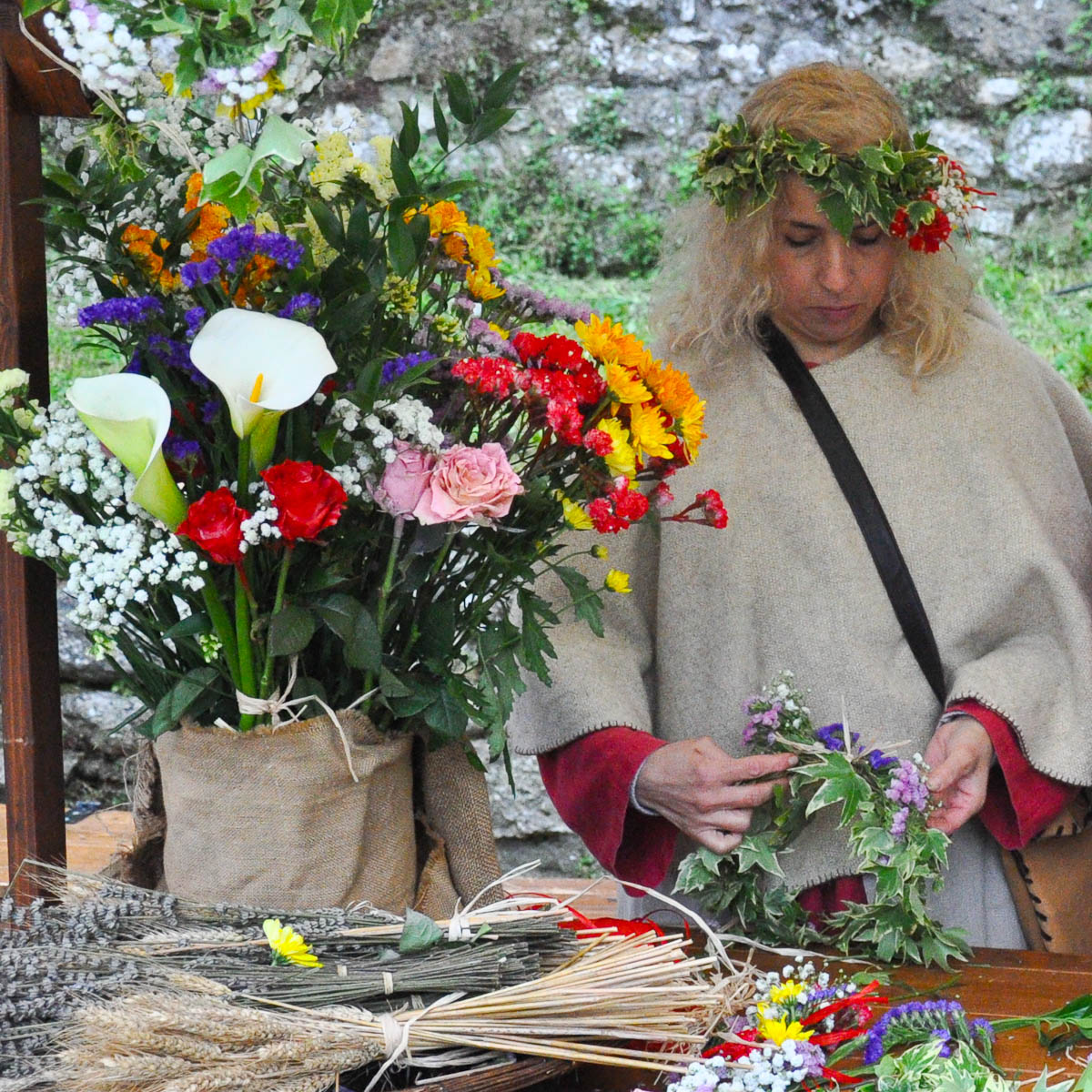 and even a whole studio set-up alfresco showing the different stages of creating a wall fresco, the type that Italian churches and palaces are famous for. 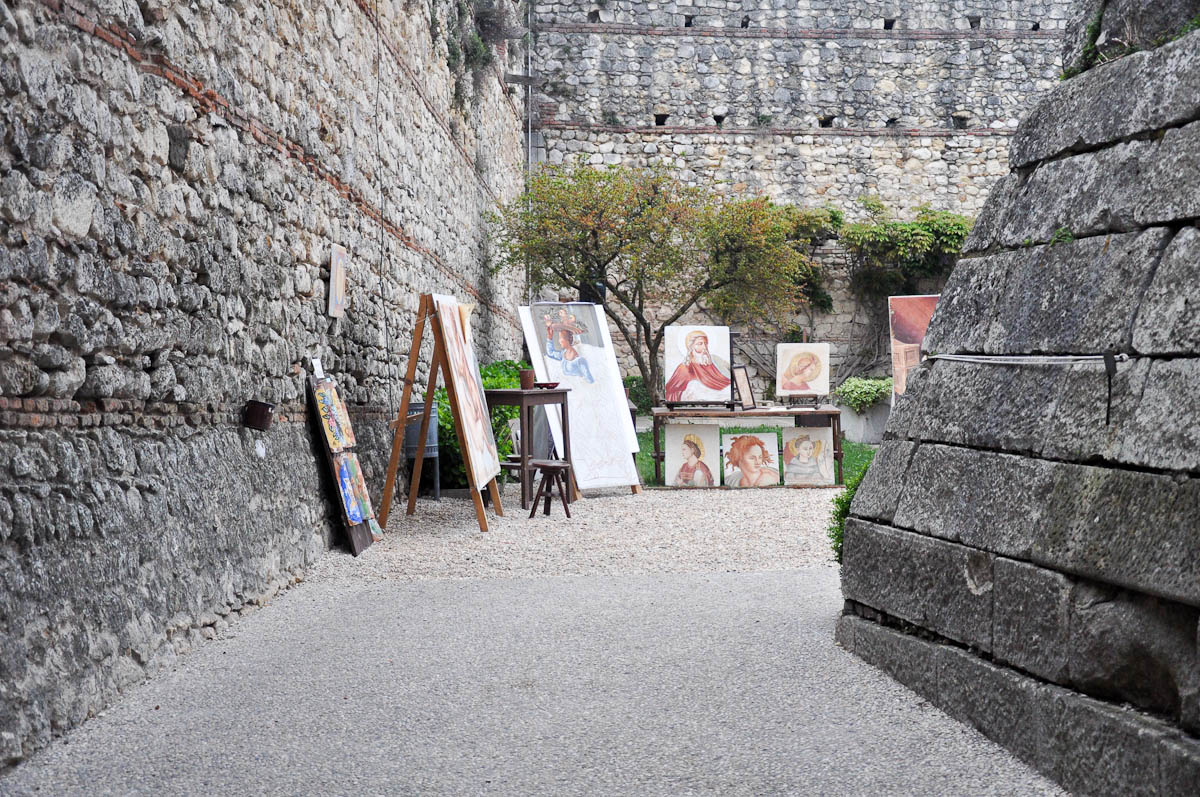 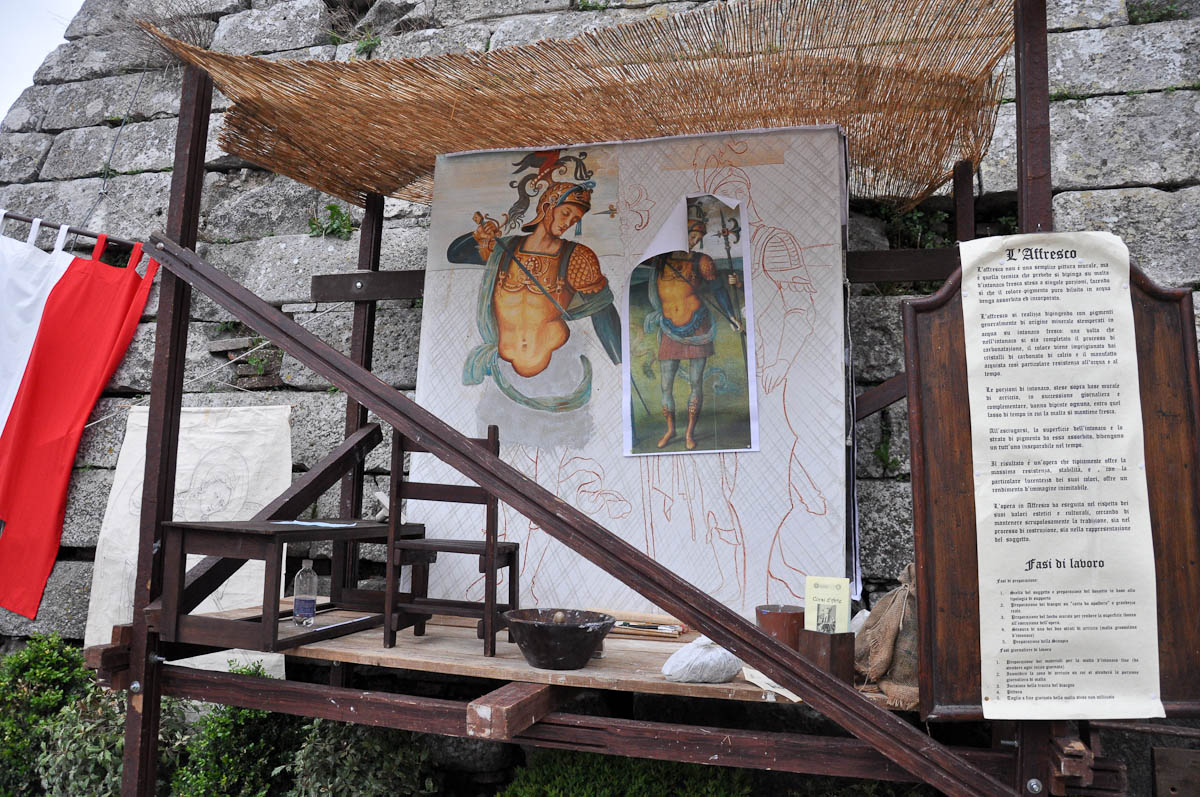 We walked around taking it all in. At one moment a sword fight was taking place on our left-hand side, whilst a young boy on the right talked us through a local process of turning the tall tough stalks of a bush with bright yellow blooms into similarly tough fabric. 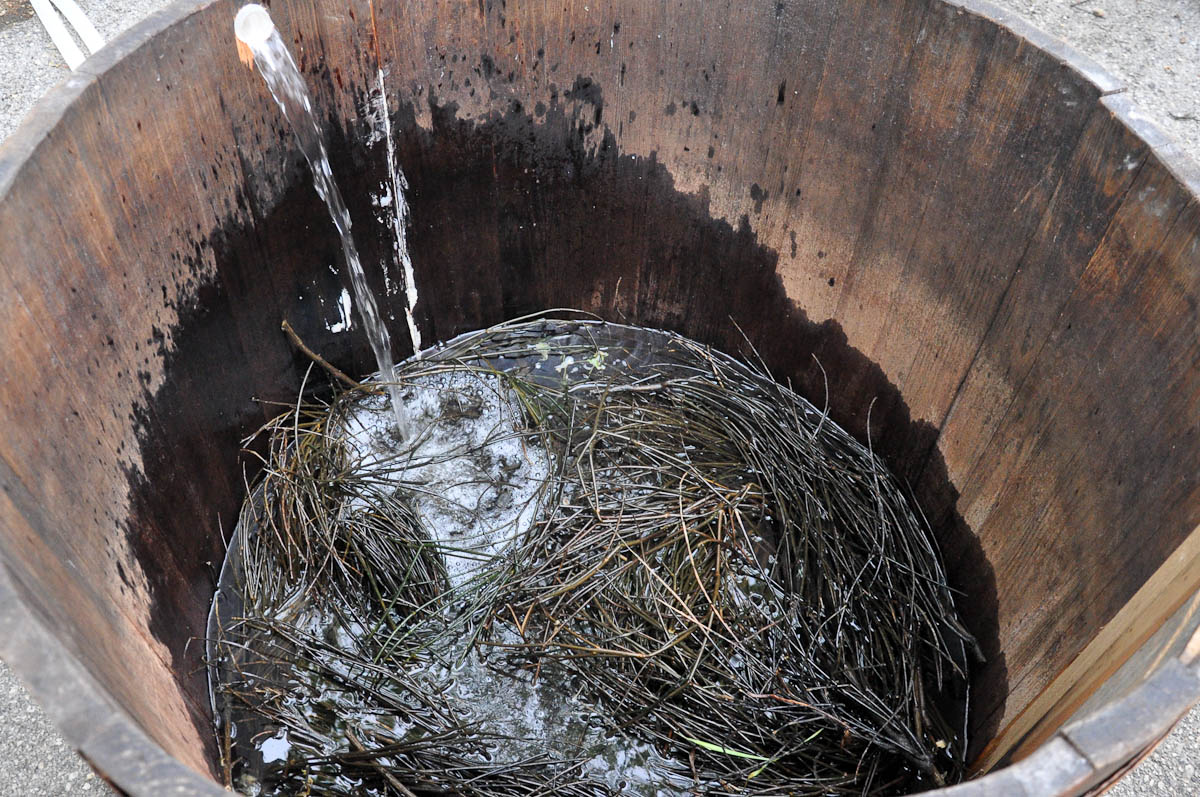 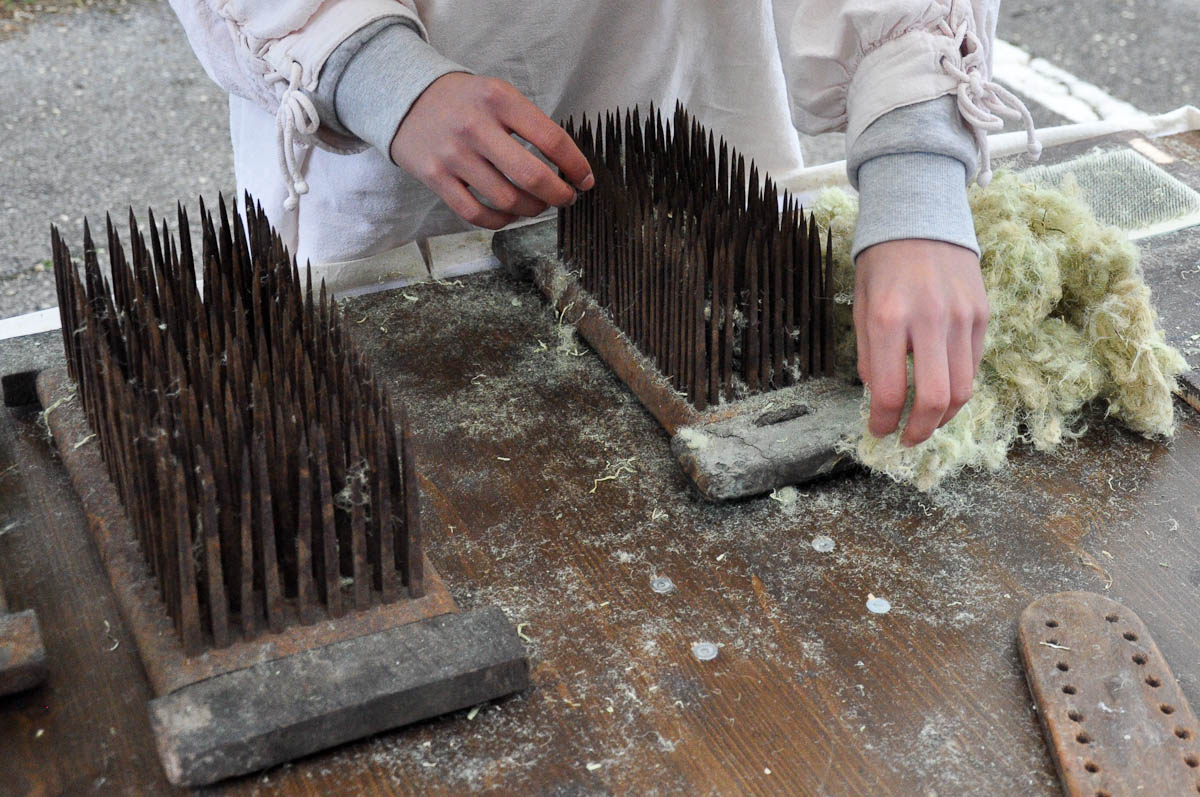 People were proud to share their heritage with us and a man with a long cape posed happily with an oven-baked bread stamped with the insignia of a local noble family, so that I could take a picture. 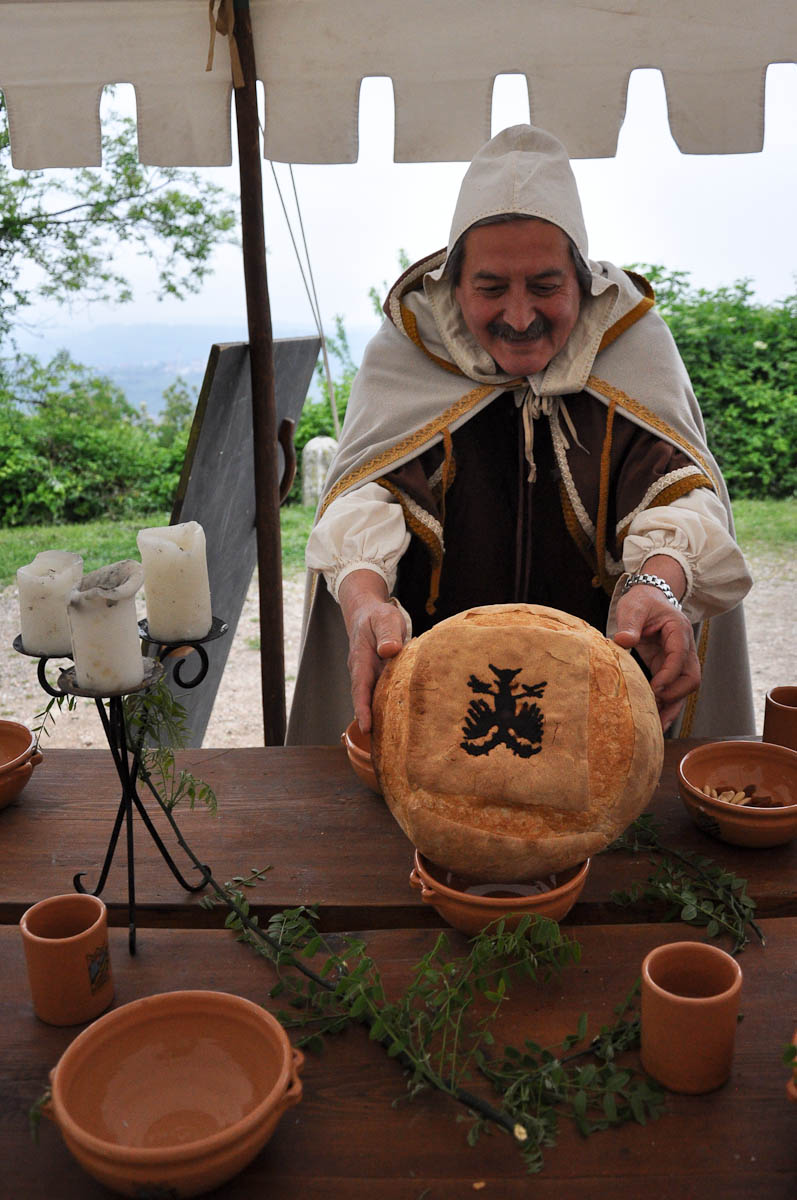 Another occasion when I came face to face with old Italian crafts was only a few weeks ago, when one of the central streets in Vicenza – our current hometown in Northern Italy – was taken over by the Association ‘Compagnia dei Ricordi‘ from the village of Cazzano di Tramigna near Verona.

The name of the association means literally ‘Company of the Memories’ in English and it is a very apt name considering its activities. Its members study old Italian crafts, learn to use the old methods and tools to produce beautiful handmade shoes, yarn, objects of wood and even newly minted coins. 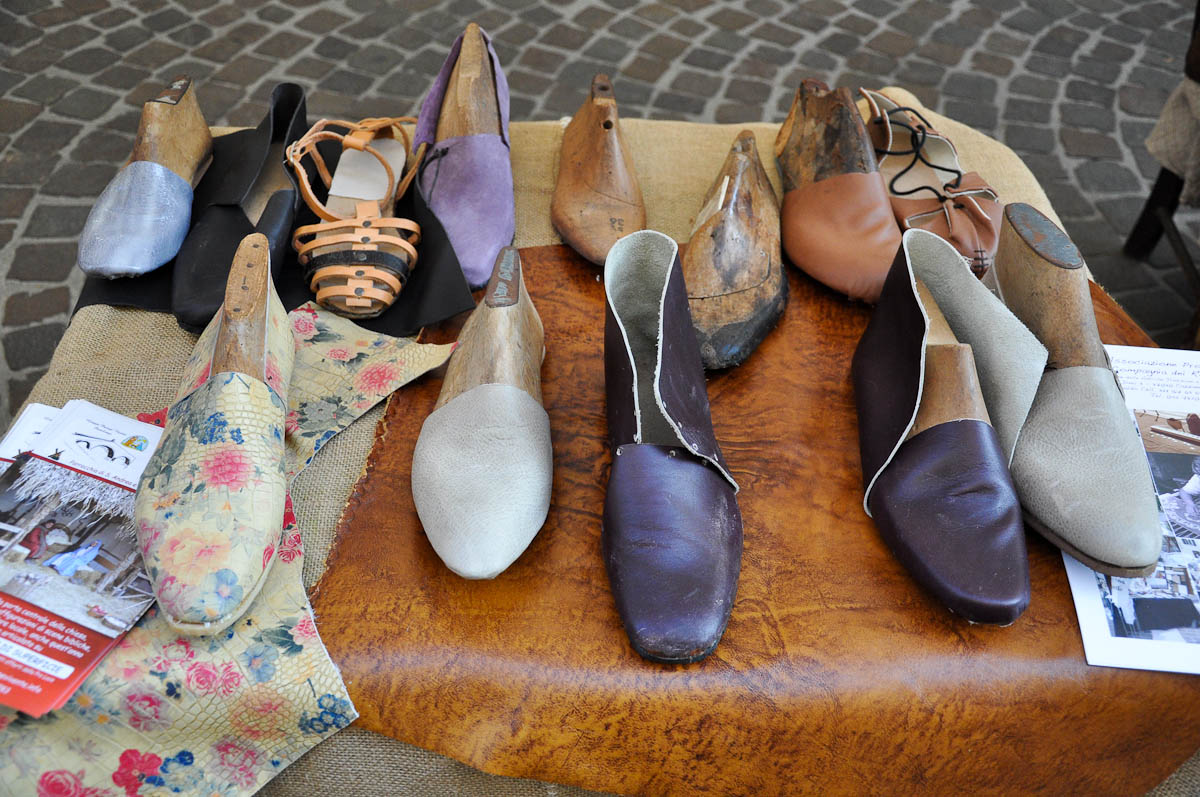 So, there, right on the street, I felt like I had been transported centuries back in time whilst observing the cobbler, huddled under his cowl, methodically and accurately mark the leather for a new pair of shoes. 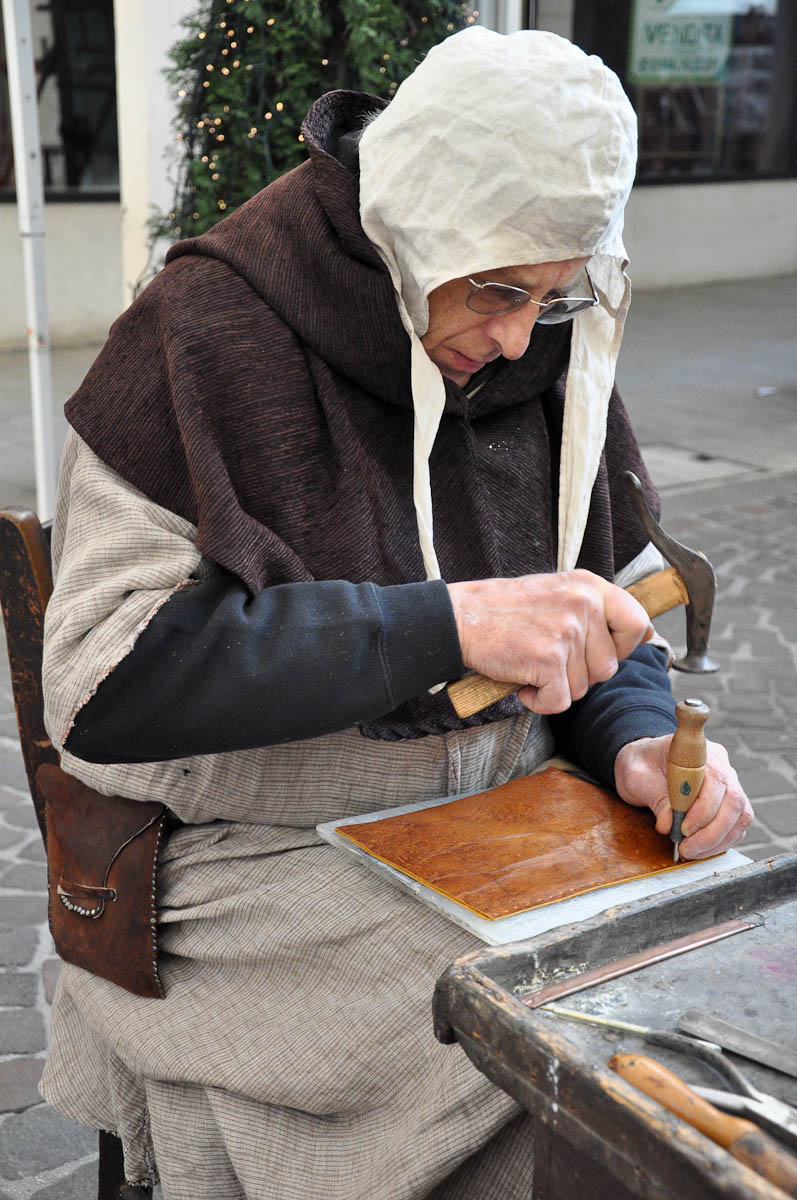 Just next to him a carpenter used a foot-driven lathe to skillfully make unique dolls’ houses. 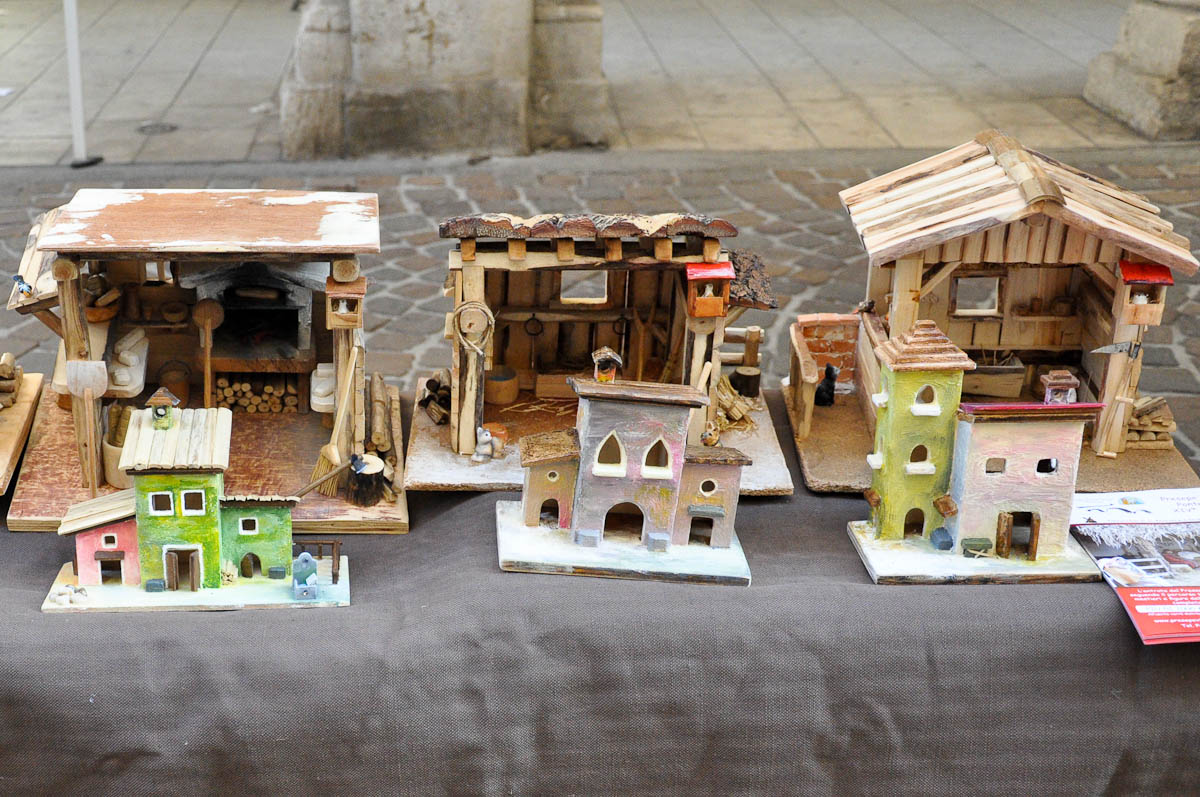 People were stopping to have a look at all the wonderful scenes which were taking place right in front of us. The craftsmen were only too happy to answer all questions and to explain how their tools and machinery worked. 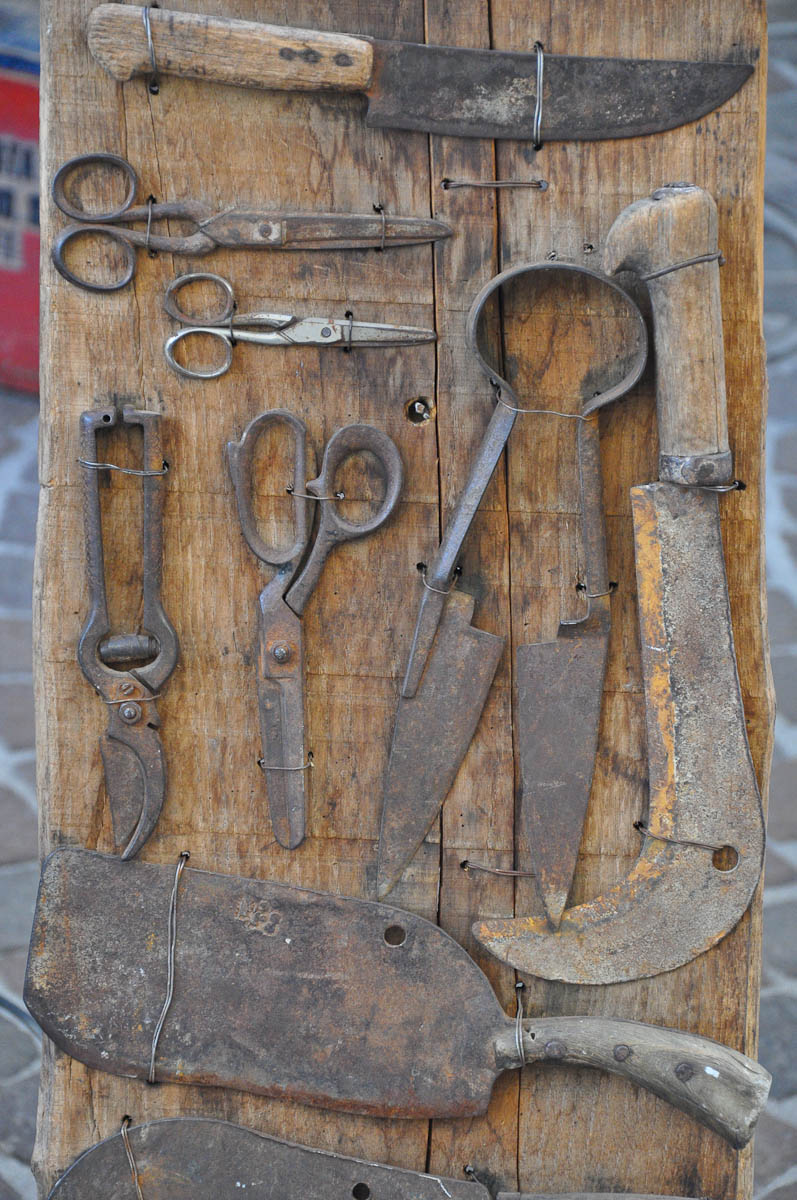 Above all the hubbub and at regular intervals I could hear a loud bang and soon I realised that this was produced by a strong young man with a huge hammer in his hands. He would lift the hammer above his head and then crash it with all his might onto a mould inside of which he had just placed a round blank. Crushed by the hammer against the blank, the mould would leave a deep imprint turning the blank into a newly minted coin. 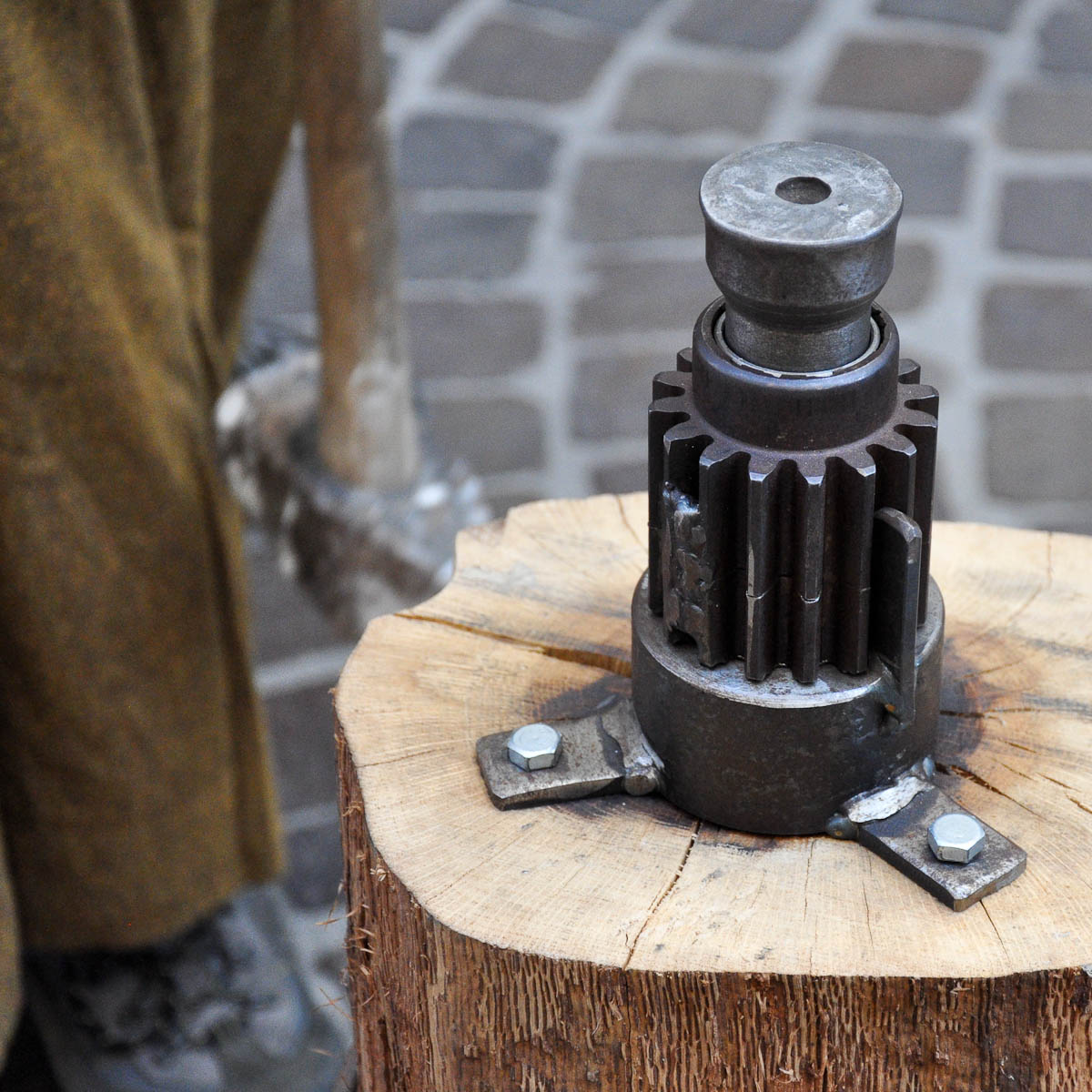 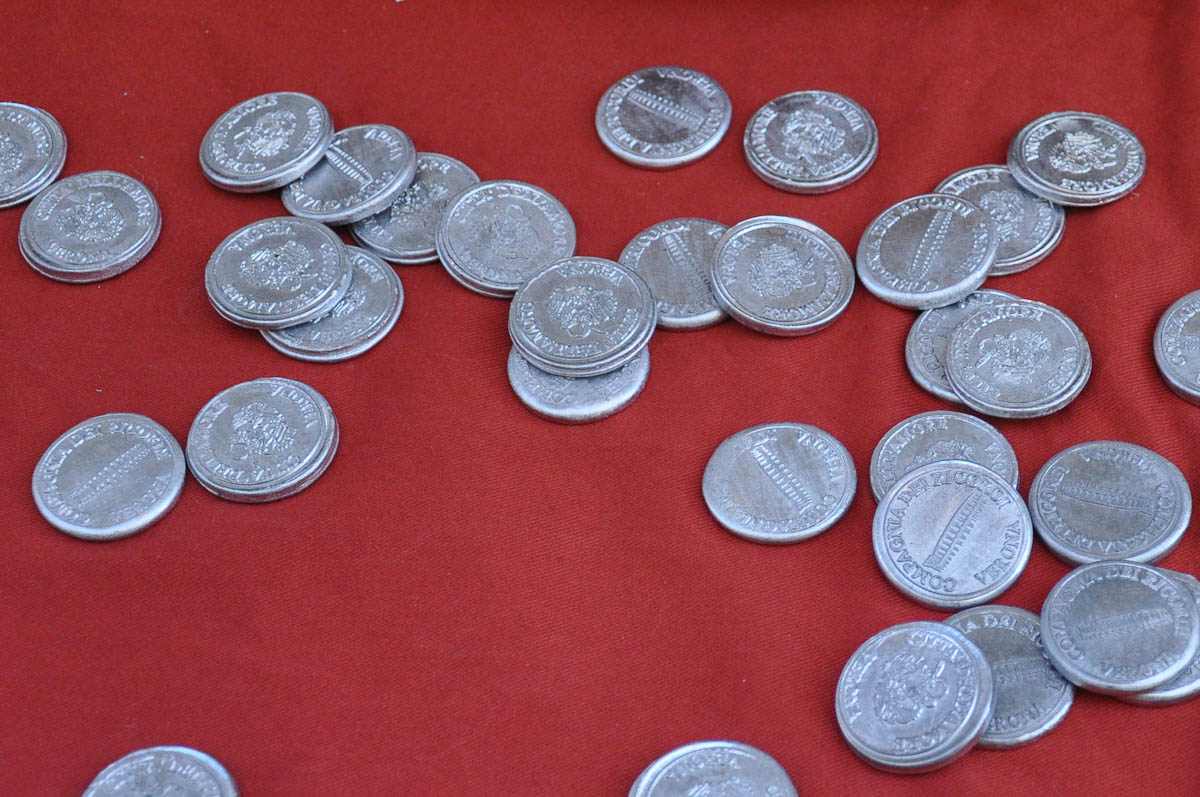 It was quite hypnotic to watch and suddenly I realised how time-consuming and strenuous just normal daily life must have been centuries ago, when there was no electricity, no powerful motors and machines and every single process – from clothes-making to food preparation – required pure and honest elbow grease. 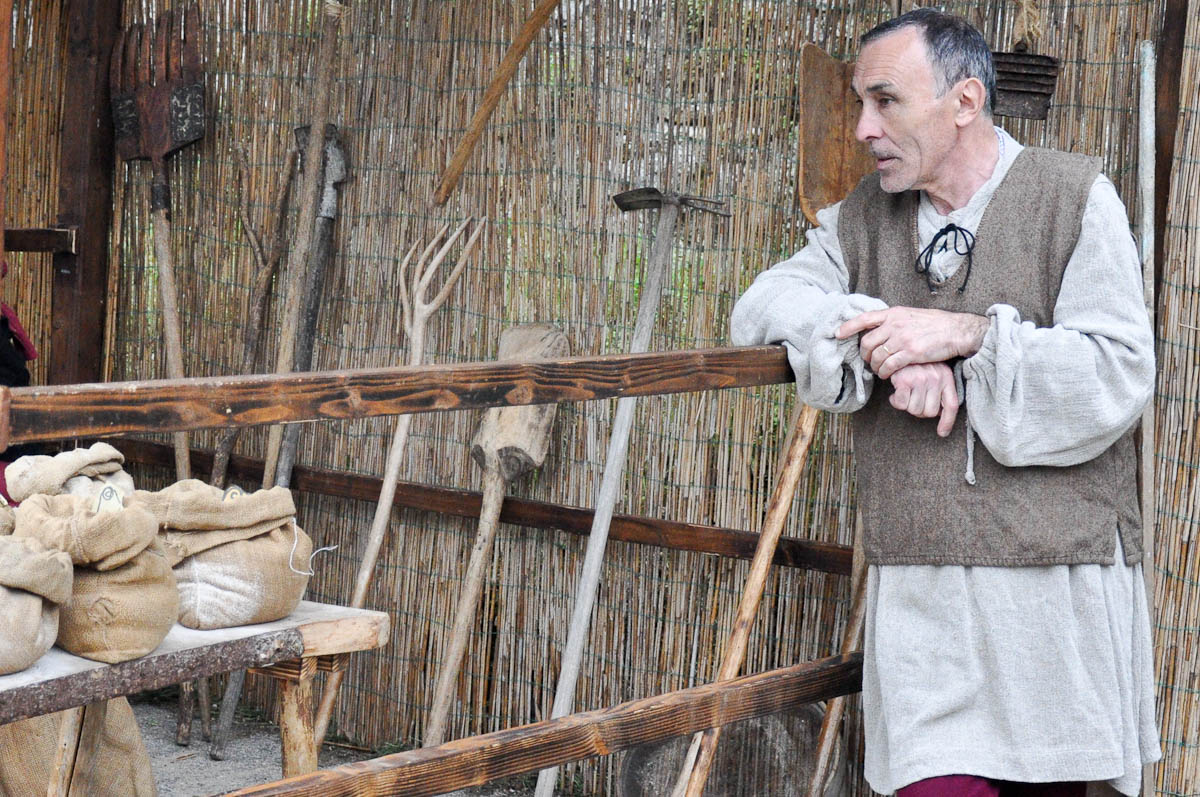 To round off my experience, I decided to have a Tarot card reading with the resident clairvoyant. Also dressed in a period costume, she seriously told me that the reading didn’t cost anything, but I needed to make sure that I paid it forward by doing a good deed for somebody else. I agreed. So, she asked me what I wanted to know, mixed the cards and then spread them in front of me. She consulted the cards for a little while and then advised me to go slow with my plans, just work on them, persevere and not expect quick results. 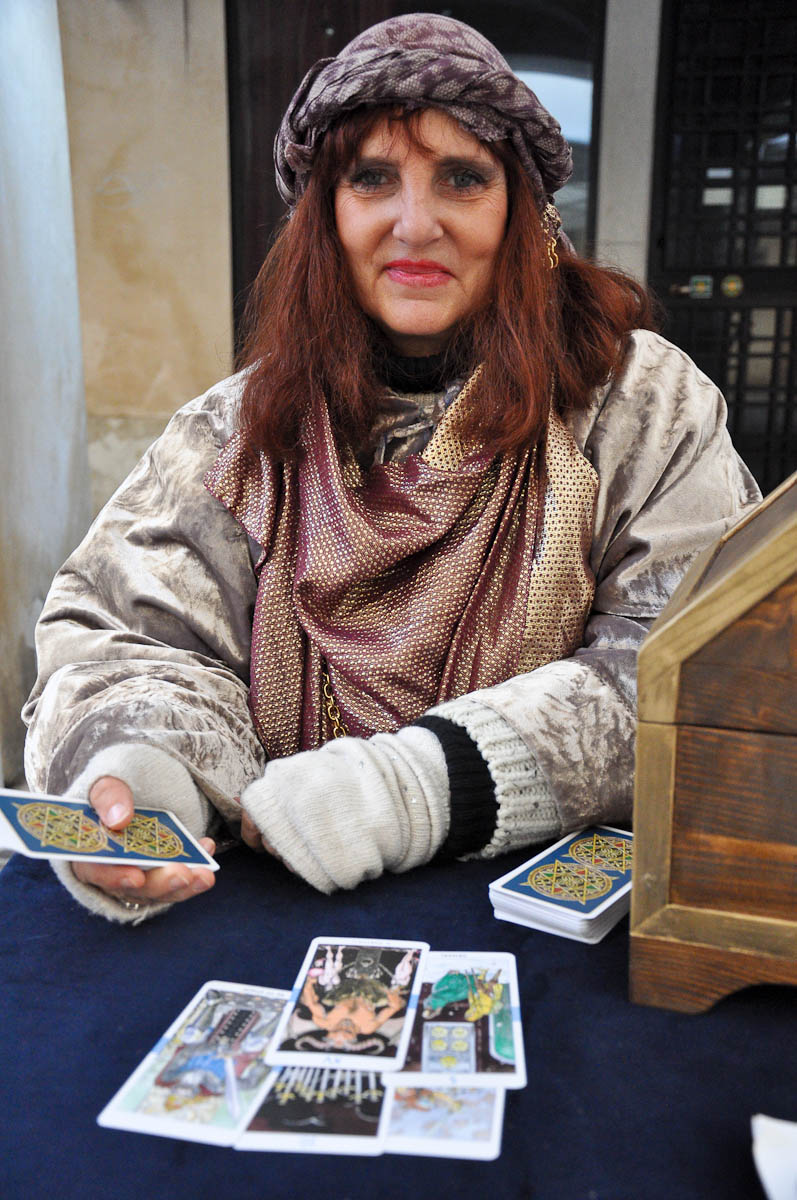 Whilst waiting for my future to be revealed, I spotted how on my right hand side the cobbler got a piece of leather and started attaching it with nails to the sole. Further down the line, the grinder was sharpening a long knife with his foot powered grindstone. 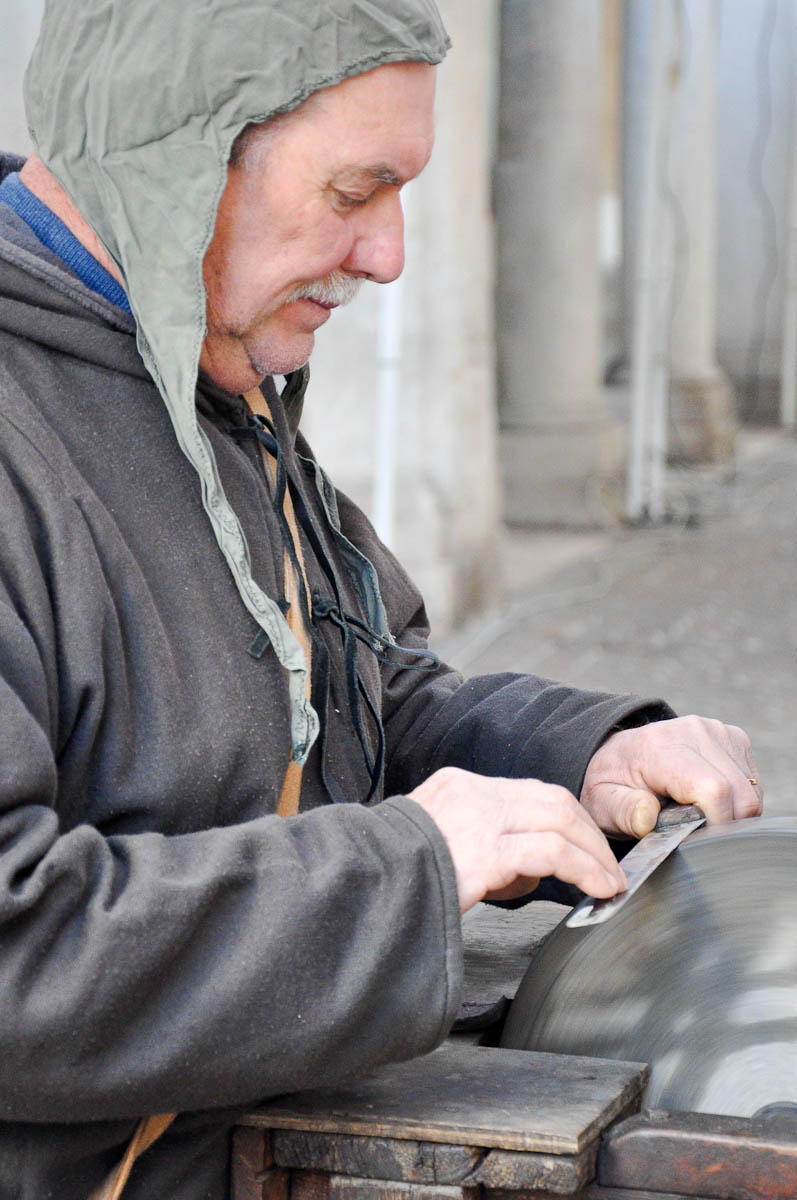 Seeing this direct reference to Italy’s past, sensing the fervour and the dedication with which these Italian people kept their heritage alive will remain one of my favourite memories of my time here. Sometimes we are too quick to reject the past, to forget about it and even call it ‘backward’. But it is by knowing our past, by appreciating its influence on us that we build a sense of national identity and it is this sense which makes a country strong. 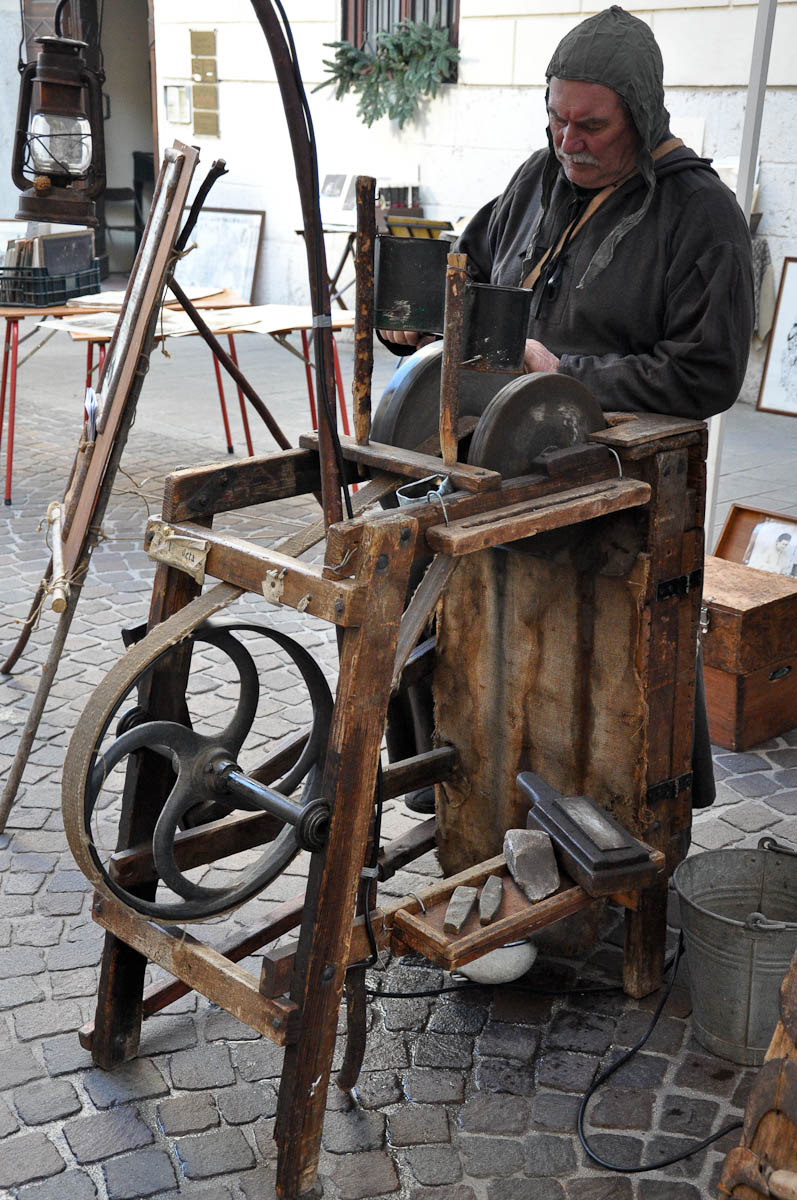