And so, it was the Friday before our wedding and we didn’t have a plan.
Well, let me re-phrase this. We did have a plan, but like so many things that week, it fell through, so we had to re-group and re-think.
Let me start from the beginning.
Back in October, we spent a week in England. The reason to return there so soon after our move to Italy was our wedding, which we had booked months in advance; February to be precise. At that time we couldn’t even begin to imagine that our long-held dream to move abroad would be just around the corner from happening. As such we booked the 18th October to finally tie the knot – an event that we had successfully procrastinated about for a long time.
This is why, after close to two months of the sunny life in Vicenza, we were on the plane and back to the rainy shores of Blighty. It was Monday and our plan was super complicated. We had to meet my parents and my sister at Luton airport on two different days, bundle ourselves in the largest car we could hire and drive down to Rochester in Kent where we had to stay at a hotel (as our flat there is now rented out) in wait for my husband’s family to arrive closer to the wedding day.
Let me just say that everything that could go wrong that week really went to the town of Wrong. A rented car with a slow-punctured tire, delayed flights, a nerve-wrecking visit to the A&E, a terrible haircut for the bride-to-be (i.e. me). You name it, we most probably had it. To top it all off, it rained. Torrential, cold, abusive rain. At all hours and all days.
In this exciting build up to our wedding, one thing went unexpectedly well.
It started badly enough – with yet another plan going to pot. The original idea was to spend the Friday before the wedding driving up to Cambridge to enjoy a day of sightseeing and perhaps a bit of punting there. I know it doesn’t sound that superb for the last day of one’s life of unwedded bliss, but when the members of a wedding party have flown from across Europe and vary from 16 months to 70-ish years of age, you do what you can.
Needless to say, Cambridge fell through that morning, as one of us didn’t feel well and couldn’t quite face the three-hour long round journey. We didn’t want to leave him on his own at the hotel for the day, so after some thought, a new suggestion was born.
We were to go to Leeds Castle, just six miles up the road from us!

Now, let me tell you that this most romantic of castles (according to its marketing blurb) is actually not in Leeds, but in Kent. It comes highly recommended with flocks of tourists besieging its gates. I remember that the last time that we went there with my then fiancé, we had to queue for tickets for a really long time.
For once we were lucky in that October week. The heavy rain from the previous few days had put people off. The place was quietly resplendent in the weak rays of the autumn sun. The huge castle grounds were deserted, moist and green. The blue water in the lakes stood still, rippled only by the occasional duck and the gentle breeze. Big trees in their autumnal best provided some lovely seasonal highlights.

Buggy et al, we piled on Elsie the little green train and after a few minutes of gentle trundling along the lane, the castle loomed into view. Surrounded by water, it would have looked its usual amazing self, hadn’t it been for the huge fabric banner covering its best bit – the bridge part connecting the ground portion of the castle to its lake side. What can I say? C’est la vie!
Undeterred, we started to explore.
Our compact group soon stretched out with people looking around, taking photos and walking with a different pace.

Eager to see the black swans which the castle is famous for, my sister had bought cups of bird food from the ticket office to tempt them with. Reading the signs around the castle grounds, we found out that a long time ago in Europe black swans were considered to be mythical creatures on a par with the unicorns. In fact, Europeans saw black swans for the first time only after the Dutch explorer Willem de Vlamingh discovered them in Australia in 1697.
Just then we saw the black swans in the lake ahead of us. They were flying low and landing in the water, making lots of noise and attracting admiring glances.
They were too far to take advantage of the feast my sister kindly was providing though. Instead, soon we were surrounded by a flock of huge geese.

My father proved to be the bravest of us all, feeding the geese from the palm of his hand, gently coaxing them with his ‘Pa-pa-pa!’. Yes, the sound that geese make in Bulgarian is ‘pa-pa’, unlike the ‘quack-quack’ they do in English. Being the multilingual geese that they were, they understood my daddy perfectly well and eagerly ate the food he offered to them.

My baby, seeing so many huge birds at such a close range, felt really excited and started to imitate her grandpa by calling the geese with the sound of ‘pa-pa-pa’, but she didn’t quite dare feed them by hand. Neither did I!

Next, we explored the gardens.
I was particularly happy, when we came across this Mediterranean terrace. Created for the castle’s last private owner – the formidable Lady Baillie – it reminded me of Italy, where we now live, and it felt like a lovely connection between our past lives in England and our present in Vicenza.

Sometimes all you need is a bench to observe the world go by.

After that we decided to retrace our steps and explore the actual castle.
We crossed the small bridge, walked through the heavy wooden doors and marvelled at the size of the nail heads stuck in them. Personally, I was taken with this door knocker shaped like a lion’s head.

We were now in the courtyard and the proud castle stood in front of us.

There was a problem though. We had to leave the buggy there and proceed by carrying our baby. I have always admired the brave and strong mummies and daddies who carry their children for miles on end. At the same time, I feel rather smug next to them, as I wear my baby in my Ergo carrier. It was an expensive purchase, but it has been worth it every pence, as it had given me so much freedom of movement and the ability to take my baby everywhere with me without suffering from bad back or a numb arm.
At that very moment though, the Ergo was happily relaxing in the boot of the car. What to do?
It was not an easy decision, but eventually we left my family to explore the castle on their own and my husband-to-be and I took our baby to have some lunch. Well, by then it was almost 1 pm and babies would always choose lunch over a castle visit, right?
In all honesty, we had been inside the castle before and when you are a parent, you need to think about what’s best for your child. Going through rooms admiring artefacts wouldn’t have cut it with her.
Off we went to Leeds Castle restaurant, which not only has a splendid castle view, but serves some smashing food, too. Just look at the desserts table and you will understand what I mean. 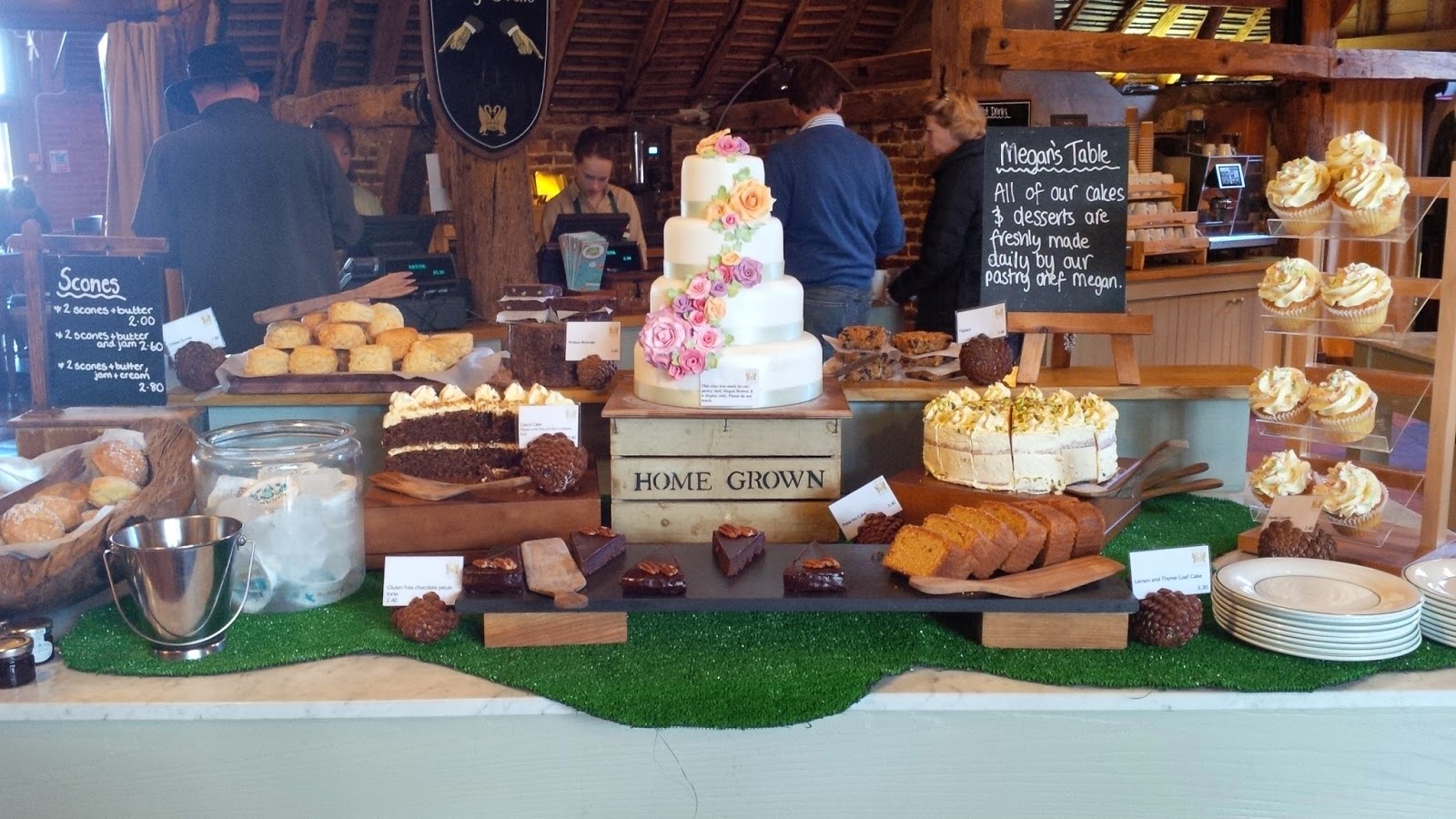 Fabulous! The carrot cake comes highly recommended by my mum.
After we were rejoined by my family and they had their lunch, we decided to lose ourselves in the castle’s famous maze. I am pleased to report that my sister and my husband-to-be found their way out of it in half the time that it usually takes. Well-done!
At this point, the most amazing thing happened. Two lads appeared with a majestic bird on the arm of one of them.

Leeds Castle is famous with its aviary and its week-end falconry displays. As it was Friday though, we didn’t expect to see the birds. So, please, imagine our delight when we glimpsed this beautiful ferruginous buzzard (I asked what type of bird she was) getting her exercise for the day.

She was spell-binding and I am still kicking myself for not asking what her name was. We asked many different questions, though, and the lads politely replied to all of them. From how do you get a job like this (you need to volunteer first and there is a long waiting list, plus some people realise it’s not for them once they start), to how they train the birds (we were told that the character of the bird is really important, she mustn’t be aggressive, as the castle organises so many public displays).
It was really magical observing this powerful bird in flight. We stood there for a really long time, captivated by the sight in front of us.

After that, we walked slowly through the castle grounds all the way to the exit. Right at the end of our path, one of the famous black swans was waiting for us (or so I like to think). He came rather close and looked inquisitively at us.

With this final touch our day was complete.

P.S. Dedicated to my lovely husband on the occasion of our first month+one day of being married!