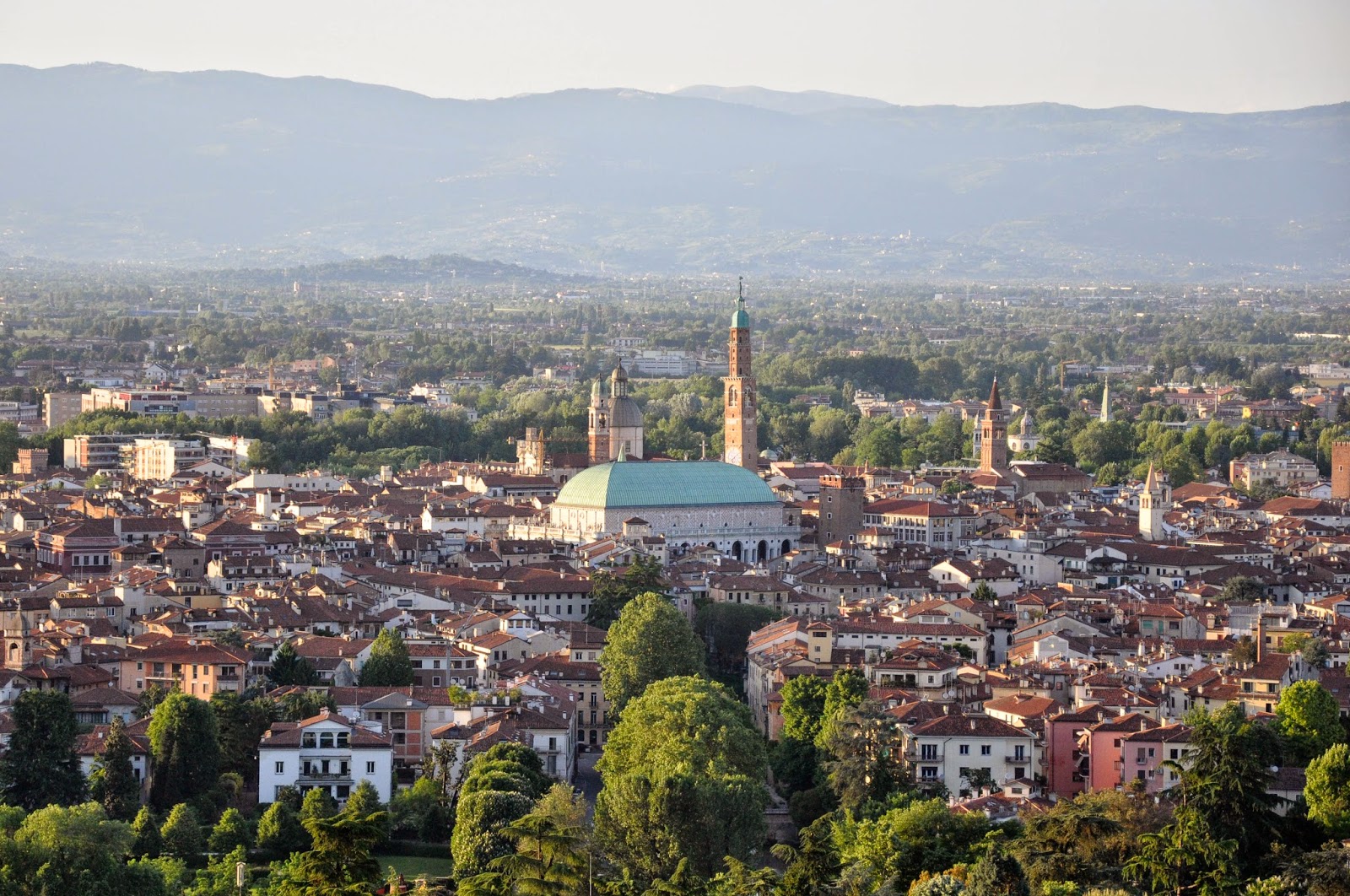 When does a place become home?

I asked myself this open end question as we were driving up to Monte Berico a few evenings ago. We were taking there my husband’s parents, who are visiting Vicenza, to show them the city from above.

Our little red car climbed the road winding up the hill. The sky was perfect blue. At the top the church of St. Mary of Monte Berico stood out against it.

Down below the buildings of Vicenza spread out in the Venetian plain bordered by the hazy body of the pre-Dolomites. Having spent nine months in this quiet Northern Italian city, we had little trouble picking up the main sights among the sea of roofs at our feet. Palladio’s Basilica stood out with its green roof and tall clock tower.

Taking in the glorious view, I suddenly realised that I had a story to share about each one of the sights and historical buildings in the plain below us. I had not only accumulated lots of information about who designed them and what their past entailed, but I also had a personal connection with each place recalling family visits to it, coffees and hot chocolates pleasantly taken in the nearby cafes and long hours spent enjoying leisurely walks down cobbled streets and on piazzas covered with stone slabs.

It is funny how smoothly my life seems to have slotted in Vicenza’s pace. It could be because I moved here with my husband and our little daughter, getting an immediate support network which I missed when I arrived in London in December 2000. In the twelve years that I spent there followed by two more in a small English town I always felt out of place and slightly oppressed by the mainly grey skies.

London and the constant race with time everyone who lives there falls unknowingly victim to, brought me several times to an emotional edge. There was a constant pressure to do things, to move forward, to achieve. From early morning when the platforms of the tube stations overspilled with commuters engaged in a no-winners rat race to late at night when the city still wouldn’t go to sleep, everything had to be done quickly, to exact specifications and to a strict soul-consuming deadline.

Even fashion was always ahead of time with shops starting to sell flip-flops and beach sarongs on 1st January and stocking autumn and winter lines from the end of June onwards.

There was a constant feeling in my heart that unless I rushed I wasn’t doing and achieving enough.

When we moved to the Garden of England – Kent, we did it seeking a less stressful yet fulfilling life. The attitude I came to feel in the air most of the time in our little town on the river Medway was one of people who couldn’t really care any less.

It was disheartening, yes.

Hence, I never felt fully at home in the UK. There was a constant yearning in my soul for something I couldn’t even phrase.

That yearning didn’t start in Britain though. I have been carrying it around with me since my childhood in my birth country of Bulgaria, where it was also coupled with the feeling that I didn’t quite fit in.

Technically, I was at home, but felt somehow disconnected, like I wasn’t really on the same wavelength as the people around me. I was dreaming of adventures, of travelling abroad, of meeting new people and experiencing new things on a daily basis. I wanted to be free to express myself and to achieve things.

Instead I was surrounded by a culture where who you know and who you are related to matters above it all. Nepotism was the name of the game. And if you didn’t happen to be the son or the daughter of a person of some importance, you could still advance in life via a political affiliation or an affiliation of a more adult kind.

There were also too many conventions to abide to. And a constant worry ‘what people would think’ was deeply seated in our minds since childhood.

Living in Italy so far has been great! We have had our fair share of difficulties and some testing moments along the way. The sensation of waking up to blue skies and radiant sun though makes me feel so full of life like never before.

On some days the world really is my oyster. Some days feel much more mundane, yet I am simply happy to be here and now, rather than endlessly stressing over this and that and running after thousands of things all of which needed to be done yesterday.

So, as I was standing on top of Monte Berico and looking at Vicenza sprawling at my feet only a few evenings back, I felt my heart connect. It was like several silver strings sprang out and bound it to the places below where I had spent many happy moments in the past nine months or so.

The silvery cobweb of emotions and love hung over the city and made my heart content.

For now I am home.