I am fascinated by coincidences.

Those special moments in time when, free from the rules of logic, the most random things can happen.

Bumping into people you haven’t seen for ages in the most unexpected places, hearing a song on the radio that you’ve just been singing in your head, the phone ringing and the caller being the person that you were just about to call. All these have happened to me and then some.

The most amazing coincidence in my life though is that I moved to live in a city the name of which I had come across two years earlier in a study book.

I realised this recently when I was going through a box with books organising the bookshelves in our flat in Vicenza. I unearthed the study book that I used when I tried to learn Italian two years ago. (This was a largely fruitless effort I have described in some detail here.)

Usually such books contain a large number of dialogues aiming to illustrate how natives speak. Often these dialogues are centred around a particular city in the country which language you are trying to learn.

The amazing thing is that the city heavily featured all through this particular study book was Vicenza!

At the time of my language course I had only the faintest idea about this Northern Italian city. ‘Faintest’ means that I had heard its name before and apart from that I didn’t know anything about it. I remember wondering why the authors of the study book had picked precisely Vicenza when developing their didactic materials, especially considering the number of Italian towns and cities which are well known the world over. In the end, I think, I concluded that perhaps they were from Vicenza and must have wanted to pay homage to their hometown.

Anyhow, I didn’t learn Italian and as our dream of moving to Italy at the time was at a level of ‘never going to happen’, I quickly forgot the whole thing.

Fast forward two years and my husband’s work has brought us to (out of all places in Italy) Vicenza!

After living here for close to five months I have fallen deeply and irretrievably under its spell. Considering how much there is to see and do here, it’s a miracle that the city is so off the beaten track.

You will rarely glimpse tourists here and I am still to find a bona fide souvenir shop, which is something of a paradox in Italy. Yes, there is a small selection of souvenirs in one of the tobacco shops on the main square in town – Piazza dei Signori – but this is nothing in comparison with the vast stores full with tourist tat that are so obvious in Pisa, Florence and even nearby small-ish Asiago. 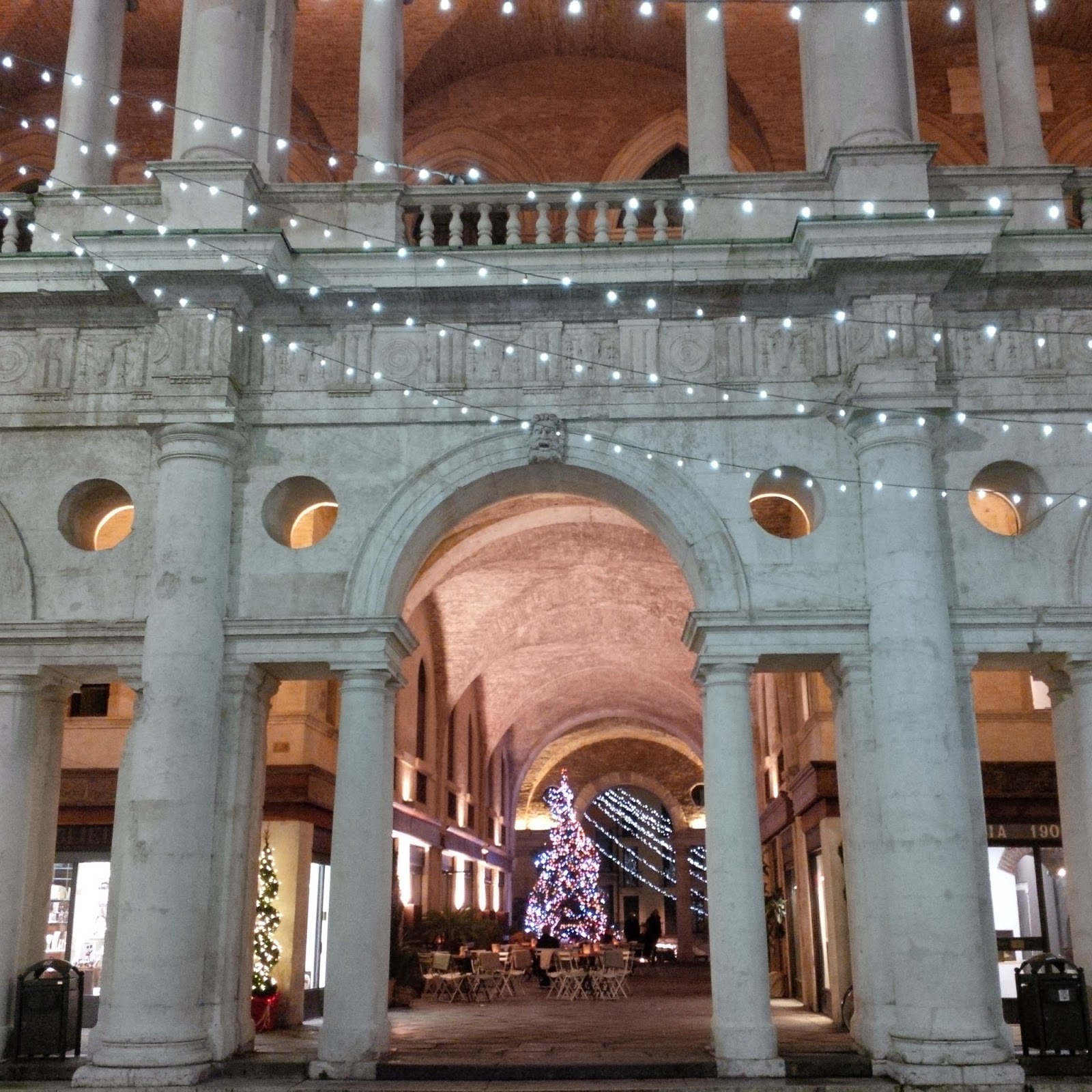 Vicenza is quietly tucked away, somehow forgotten in relation to nearby Venice and Verona, left completely to its own devices. I gather that the vicentini prefer it this way.

At the same time, Vicenza is stunningly beautiful, its streets lined with elegant palazzi and its surroundings dotted with breathtaking villas. Let me just tell you that this is the place that nurtured the talent of one of the most prominent architects of the Western world – Andrea Palladio. Even though he died in 1580, such was his influence on designing buildings and architectural concepts that he is also renowned as the Father of American Architecture.

Centuries before him this was a Roman city with an aqueduct and an amphiteatre. If you have a free hour on a Saturday morning, make a visit to the Criptoportico – the preserved gallery of a Roman villa, which is now several meters under ground.

I love going for a walk round Vicenza’s centro storico, admiring the proud old buildings with their beautiful ornamentation, the elegant avenues with their fabulous fashion and beauty shops, the quiet arcades and the seemingly slow rhythm of life.

Nothing seems hurried and no-one seems too stressed about anything here. People take their time to do things – from serving you at the counter of a small shop to actually pop their heads through the window and chat with you when you get back home after a leisurely stroll.

Shops and offices still close for three hours every afternoon and on some days don’t re-open until the next morning. So, I’ve learned to plan around this, as I was always the one to run stressed and hurried into a shop five minutes before it was time for it to close for the afternoon reposo.

At the same time, Vicenza is a massively successful industrial city with significant textile, steel and jewellery industries. Three times a year it plays host to one of the biggest trade jewellery expos in the world, which I am to attend in two weeks time and I am so looking forward to it.

It is also the city where the only Jewellery Museum in Italy just opened its doors with a fabulous exposition of jewels that are the stuff of dreams. Considering my huge interest in jewellery and the time I spent trying to master certain jewellery-making techniques, some days I can hardly believe that I ended up living right here. A coincidence or what?

Talking of coincidences, let me finish by telling you this.

On the last day of 2014 we went out for a walk. We had come back from England a couple of days earlier and needed to reconnect with our adopted hometown. We were at Piazza dei Signori admiring Palladio’s Basilica and the fabulous Christmas lights draped around its clocktower, when…

We spotted a man with a camera who looked strangely familiar. He was speaking in English to his companions, so we felt brave enough to approach them and strike a conversation. They were from the US and we chatted a little bit about the amazing new exhibition that is taking place in Vicenza just now (to which I will dedicate a separate post asap).

After a while, my husband said: ‘Excuse me, but are you Wolter from Wolter’s World?’. It turns out that we had met the travel vlogger whose videos about Vicenza we watched right before moving here. He was in town for a short amount of time and we managed to ran straight into him.

Now, what do you call this?!