Yes, Padua is less than 30 km away from Vicenza. It still took us almost six months to pile in our little red car and drive there.

It’s not like we didn’t want to visit. On several week-ends we even had the ‘shall we, shan’t we’ discussion. Yet every time we would choose to go someplace else instead.

I think the main reason for our apparent reluctance to explore the oldest city in Northern Italy was that our first months of settling here were rather hectic, so we much preferred spending a quiet week-end in a small picturesque town. Somewhere lovely, like Marostica or Citadella, that allowed us to wander around without a plan suited us fine.

Padua with its many churches, basilicas and palazzi, the biggest square in Italy and various fabulous museums, seemed just too much. As such, it got put on the backburner time and time again.

That’s it until the start of this week.

This is when, after a leisurely breakfast, we finally decided that the time had come. The sun was shining, spring was in the air and the blue sky beckoned us out of the house.
Half an hour later we were pulling into Padua with only the sketchiest of plans.

The city was quiet with deserted streets. We wandered around admiring the centuries-old buildings and the arcaded pavements.
Our first stop was the Scrovegni Chapel. They don’t allow pictures there, so, please, please, please, click on its hyperlinked name and just spend a minute admiring the fabulousness of this place.
With an inner surface of 900 square meters fully covered with frescoes by Giotto, the chapel is a fragile medieval masterpiece. It has undergone a 25-year long restoration and the public can access it in small groups only after spending 15 minutes in a hermetically-sealed antechamber. This is done in order to stabilise the atmosphere and avoid further damage to the frescoes.
The time in isolation was taken by a documentary, after which we were ushered in the chapel.
You know that you are in the presence of a genius, when even a little child like our daughter is completely taken with the painted scenes. She enjoyed spotting the different animals depicted on the walls, pointing to them and doing little impressions.
I loved the high-vaulted ceiling painted like the blue cope of heaven. As for the depiction of Hell, it was unsettling as it seemed so real. Had I been born 700 years ago, when the chapel was painted, I would have been sure this was all that expected the misbehaving humanity.
They only let you spend a quarter of an hour inside the Scrovegni Chapel, so when our time was up, we found ourselves back on the streets of Padua with no definite plan. The weather was too nice. The sun was shining and we wanted to enjoy it rather than spend the rest of the day in a museum or two.
So, we started on a leisurely walk around the city centre, simply hoping to come across a place of interest.

I quickly established that Padua had some lovely patisseries. Little shops full to the brim with amazing sweets and desserts kept catching my eye.
The most notable of these were the giant meringues. I had never seen anything like them before.

Of course, I asked why the meringues in Padua were so much bigger than anywhere else. The owner of the patisserie laughed and said: ‘When you are a little child, you get a small meringue. When you grow up, you need a big meringue, no?!’
I had to take his word.
We kept wandering around the city admiring its lovely buildings with balconies adorned with dozens of potted flowers and windows protected by shutters in various colours.

We chanced upon the almost 800 years old University of Padua, famous among other things with the fact that Galileo Galilei taught in it.
This is the gate leading into the University…

…this is its courtyard…

… and this is its rather arresting staircase.

We progressed further and after walking down one really straight and long street for close to 20 minutes, we reached the biggest square in Italy and one of the biggest in Europe.
Prato della Valle!
This is a breathtaking in its expanse elliptical square which is 90 thousand square meters large and it is brimmed by a canal adorned with statues.

Lots of people were seated on the edge of the canal, quietly chatting the day away under the rays of the warm February sun.

We joined them for a bit and lazily watched the big fish in the water fighting over the pieces of toast we threw them. A seagull quickly got in on the act.

From there it was only a short walk away to the Basilica of Santa Giustiniana. It was another place in Padua which startled us with its gigantic size.
Inside the basilica was cavernous with huge columns supporting its many domes. Unlike other churches in Italy, it was almost bare, with only a few religious paintings and sculptures in its many chapels.
The geometric pattern on the floor created an almost dizzying three-dimensional illusion.

I was taken with the many fine examples of ‘pietra dura‘ – the exquisite art of inlaying finely cut pieces of precious and semi-precious stones in order to create intricate images.

It was already late in the afternoon. We were still slowly exploring Padua, when we came across the Basilica of Saint Anthony. I had been really looking forward to seeing it, as two of its domes are conical rather than round.

The tomb of Saint Anthony is in the basilica and people were patiently waiting to touch it and offer a prayer.
The basilica is stunningly beautiful and we took our time to explore it. As photos are not allowed inside, here are a couple of pictures I took of the main gate instead.

Outside of the basilica is a statue of a horseman by Donatello. Created in 1453, it was the first full-size equestrian bronze cast since antiquity. 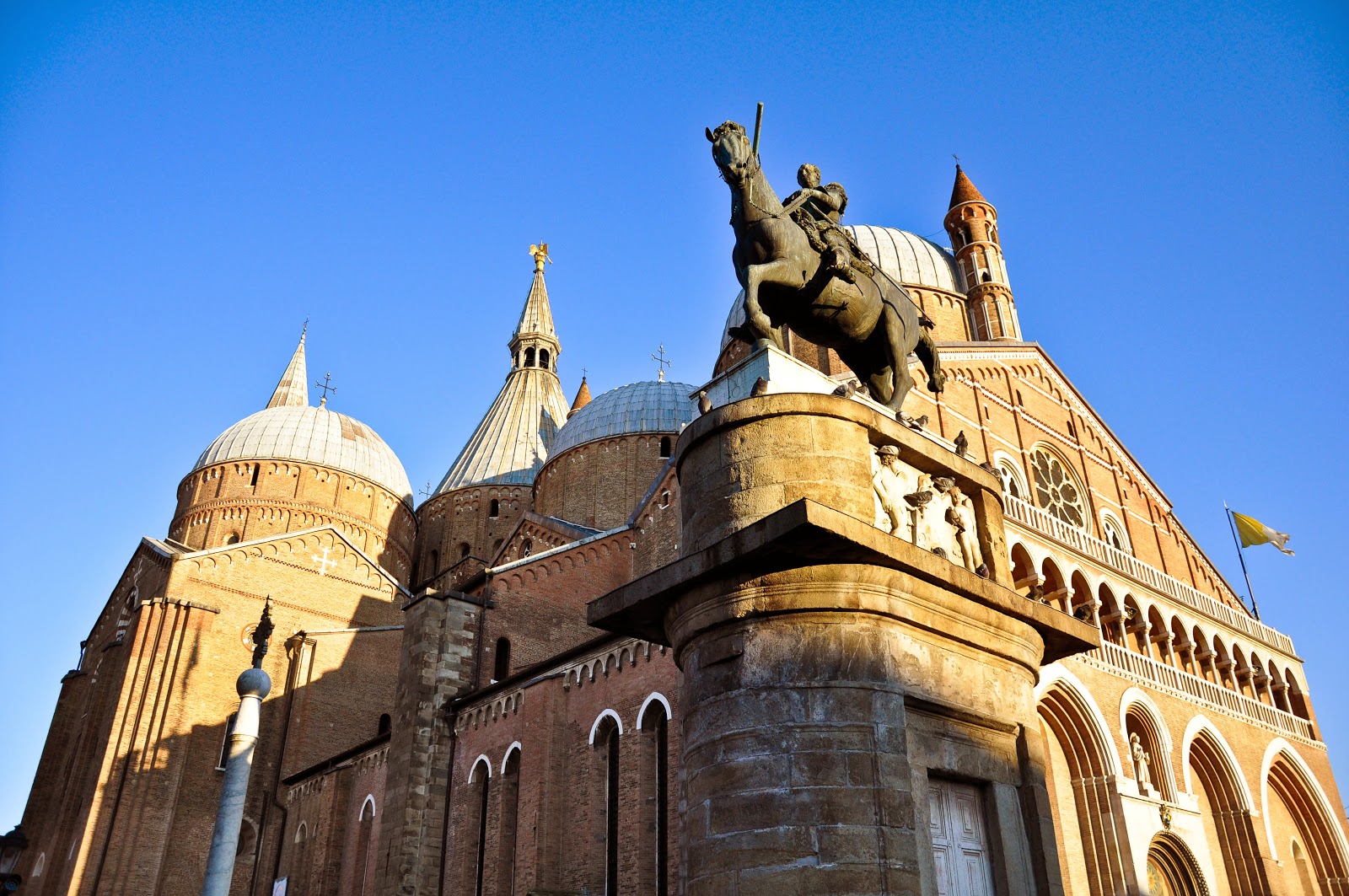 We finished our day in Padova with the purchase of a traditional sweet – il dolce di Sant’ Antonio. We are planning to have it soon with a cup of strong tea.

In the meantime, I hope that we won’t leave it too long before our next visit to Padua. There is so much to see and do there, that it will be a shame if we wait another six months before making the short trip from Vicenza again.
Share2
Tweet5
Pin9
WhatsApp
Email
Share
Reddit
16 Shares