Let me tell you about the walk we took around Verona. I will show you lots of pictures, too, so make yourself comfortable and enjoy.

We started at Piazza Bra (don’t laugh!) and finished at a place, which turned out to be my favourite in this Northern Italian city. 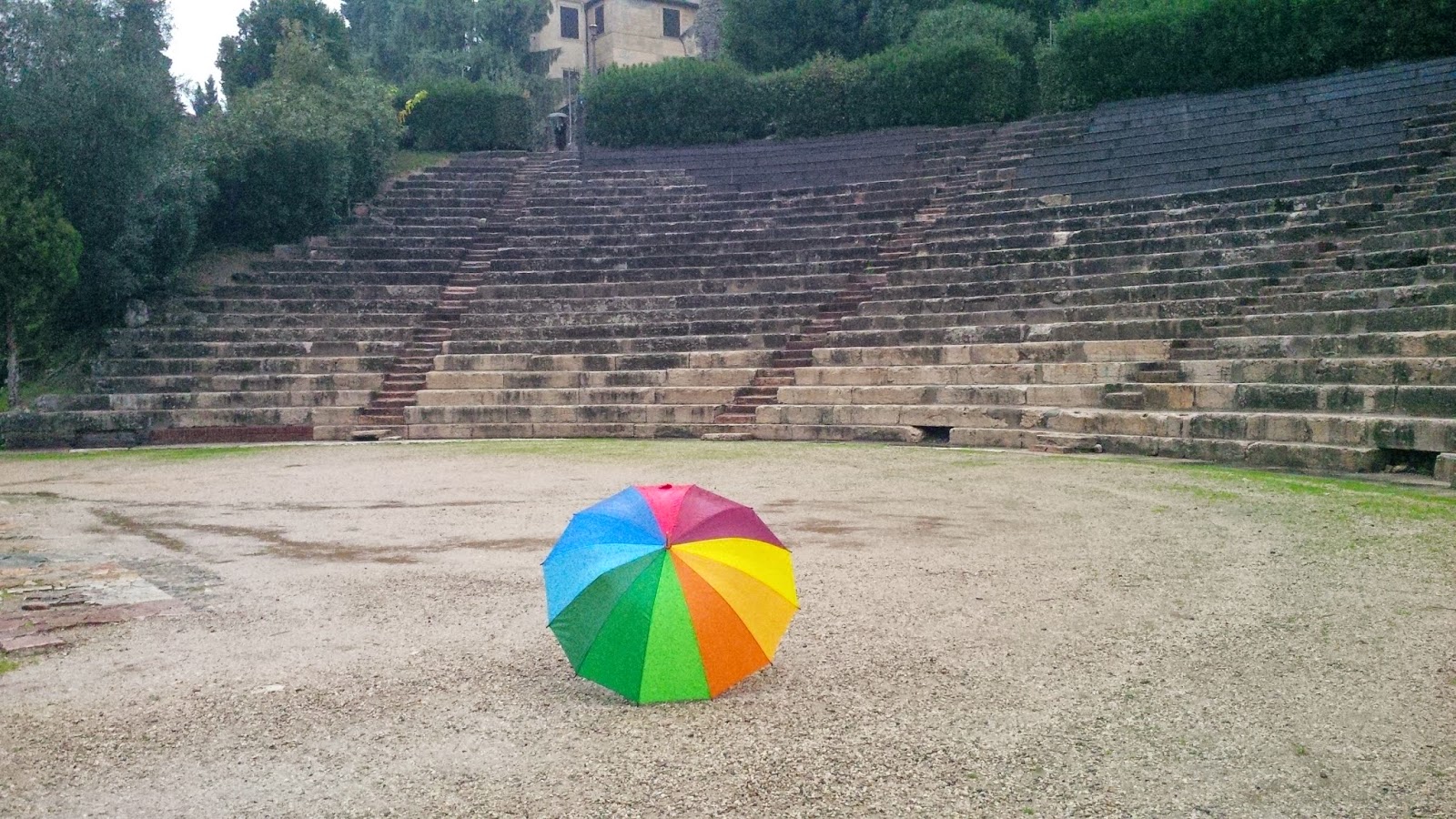 Before I take you there though, let me set the scene…

The last day of November was grey and rainy. The streets were bustling with people carrying umbrellas. Christmas decorations adorned squares, shops and streets and Christmas lights were glinting in the reflections of the rain. It was not cold, but in a place where Summer temperatures often reach 35 C, the mild 10-12 degrees of late autumn are sharply felt, so everyone was warmly but still very stylishly dressed.

And so, my husband, our baby and I were at Piazza Bra. No, honestly, don’t laugh! Its name comes from the German word ‘breit‘, meaning ‘broad’, rather than the English term for the undergarment that women some decades ago would burn to emancipate themselves.

Piazza Bra is undoubtedly broad, being the largest square in Verona and one of the largest in Europe. It houses a park and several buildings of interest and we were headed to the most famous one of them.

The huge Roman amphitheatre, built in the first century AD, or, as the guard at the entrance told us when we asked how old the Arena was: ‘It’s older than the Colosseum in Rome!’

We followed the curve of its walls, admiring its powerful arches. We were stopped in our tracks by the fabulous Christmas star that currently adorns the Arena, bringing festive cheer to its centuries old stones.

Then we went in.

Sometimes it is so difficult to capture in a picture the majestic scale of a place. Arena di Verona was one such case!

We were at the bottom of a huge cauldron surrounded by tiers and tiers of high stone steps sweeping steeply up towards the sky and spreading amphitheatrically in an oval shape.

Carefully, we started our ascent. Upon reaching the summit of the Arena, my baby, securely strapped in her Ergo, looked down and exclaimed: ‘Wow!’. It is one of the few words (or interjections in this case!) she has learned, as my husband and I have been overusing it lately faced with all the wonders that Italy has had in store for us.

In its Roman heyday the Arena could take in 30 thousand spectators. Nowadays it can accommodate 22 thousand and it is a worldwide famous opera and concert venue.

In fact, in 2007 when I visited Arena di Verona for the first time, the Italian star Zucchero was about to have a concert there and we saw the huge stage and the tons of stage equipment that people were getting ready for the performance that same night.

Now the bottom of the cauldron was bare, save for the messages and even some rude pictures that people had scribbled in its sandy ground. I had to use some pretty inventive camera angles to avoid including these in my shots.

Just imagine, you wake up one morning, you are in Verona and you go to the Arena to see this architectural and historical gem. What do you do? Instead of admiring it, you go in search of a big stick, then use it to draw a picture of an unmentionable body part so big that it could be clearly seen from the top tier seats of the amphitheatre. Then, satisfied, with your ‘art’, you leave! What a p***k!

Other than that, I loved the time we spent in Arena di Verona. Being so close to history is a fabulous feeling. making you see the world in a different light.

After the Arena, we joined the hustle and bustle of Verona and explored its busy Sunday streets. There was an abundance of fashion, antiques and jewellery shops, but my eye was drawn to shops with window displays like these.

Just look at the artistry of the cakes here…

OMG! Look at the size of the cheese here…

Oh, what a lovely shop…

Yes, I admit it, my thought process was rather basic when faced with this!

At the same time an observation slowly started to take shape. I thought of perceptions and how our habitual environment can define how we feel about a place.

I remembered that when I first visited Verona in 2007 I had found the city rather uninteresting and small. Mind you, I was living in London at the time and London seems to have this ability to mess up your mind in terms of size and attractiveness of places and things. London can be so overwhelming most of the time, that most people who stay there for an extended period of time (11 years in my case), apparently develop this hard shell of being difficult to impress and please.

I am happy to report that after two years in Chatham and a few months in Vicenza I am more than ever a small town girl at heart. As such this time I found Verona exciting and very colourful. I loved observing the people having coffees and lunches in the dozens of cafes and restaurants. I enjoyed walking around the city centre discovering new places and things.

It is all a question of perceptions and I am pleased that this time I was in Verona in the right state of mind.

But enough of these deep thoughts! We were at the fabulous Piazza delle Erbe and I needed my brain and heart unencumbered and free in order to absorb all the beauty that we were surrounded with.

Now, have a look at the amazing Mazzanti Houses! It makes you understand why Verona used to be known as the ‘Urbs Picta’ (the painted city), as buildings would be painted with wonderful frescoes in bygone times.

The Mazzanti Houses from the picture above are right next door to the baroque Palazzo Maffei, which looked splendid both during the day…

I was particularly taken with these colourful tall and narrow buildings at the opposite end of Piazza delle Erbe.

We were headed to the Torre dei Lamberti. Located in the northern end of Piazza delle Erbe, this is an 84 meters high tower, the construction of which started back in 1172. Our plan was to scale it!

Well, I am pleased to report that there was a lift! It cost an euro on top of the entrance fee, but this was the best euro I’ve ever spent. I couldn’t really climb all 84 meters of the tower with my baby strapped to my chest. Instead the lift took us quickly and safely almost all the way up. Then we had to climb only a few more steps to the lower and then to the top observing platforms and we could enjoy fabulous vistas like these.

This is Piazza delle Erbe seen from Torre dei Lamberti.

And here at the back you can glimpse the river Adige that runs through Verona.

After Torre dei Lamberti we went to see Juliet’s House – a visit I’ve told you all about in this post.

So after saying good-bye to Juliet we got lost (figuratively speaking) once more in the maze of streets and piazzas in the city centre of Verona, admiring architectural whims and fancies as we went.

For example, I loved this painted archway…

… this gate with a winged lion…

… and this suuuper long outside staircase.

After some time we found our way to the river. It was now raining really thick and fast, so our baby was cuddling under the protective cover of the buggy, I was relying on my huge rainbow umbrella and my husband was happy under his Australian hat.

We crossed the river Adige over the oldest bridge in Verona – Ponte Pietra – which was completed by the Romans in 100 BC.

The river ran very fast and was quite furious, too. Just see the huge tree trunk that it was dragging under the arches of the bridge.

On the other side of the river Adige we made our way to the Roman Theatre. It was quiet and secluded. The place had been witness to over 20 centuries of history. Today the theatre is still used for performances and events. When we were there, perhaps because of the heavy rain, we had the place exclusively to ourselves. It felt peaceful and safe.

And when I climbed to the top of the steps, I had the chance to enjoy this beautiful view.

I am so glad I had a chance to come back to Verona and see this exciting city with fresh and happy eyes. I enjoyed my time in it and as it is only 45 minutes up the road from Vicenza, I hope to return there many more times.

Verona is now firmly one of my favourite places in Italy and as for my favourite place in Verona, this for sure is the Roman Theatre for its sense of quiet and history and for showing me that, if I so wish, there could be a splash of colour even when it rains.

I hope you had a wonderful time exploring Verona through my eyes. Do let me know your thoughts in a comment below or by connecting with me on social media (my accounts are at the top of the page).
Have a fabulous day 🙂